It’s the dream you never knew you had: being gifted a Nintendo Switch by surprise on a flight to San Diego Comic-Con. This spectacular video game fantasy came true today, as Southwest Airlines gifted all the passengers on a flight their very own Nintendo Switch systems.

Check out the pictures and the video showcasing the generous act from Twitter user @LaurMoor:

EVERYONE ON THIS FLIGHT JUST GOT A NINTENDO SWITCH!!! @NintendoAmerica @SouthwestAir #SouthwestxNintendo pic.twitter.com/mUlryf4Kkv

Taking a look through the tweet thread, you’ll get a glimpse of how the event unfolded. It sounds like a rep decked out in a Super Mario Maker hat hinted to passengers that a “surprise” was “in store” as they all waited to board the plane. Upon boarding, they received tickets explaining the impromptu giveaway. Check out this picture of the ticket from Twitter user @JuanAnchante: 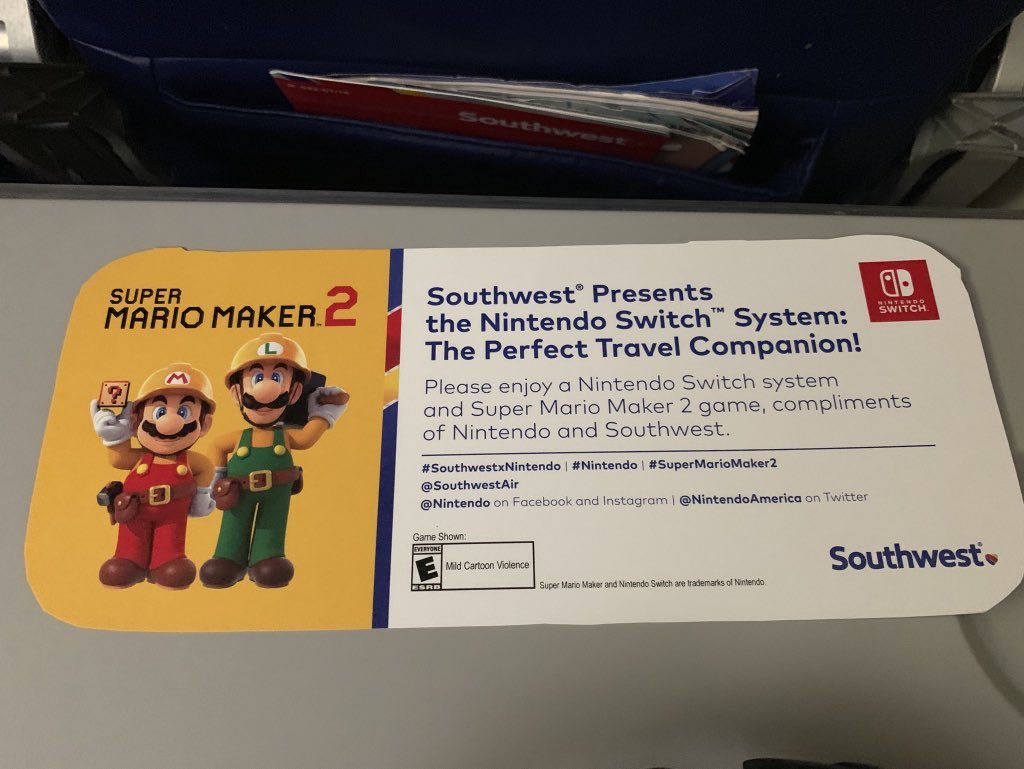 A little while later, Nintendo reps handed out glorious bright red bags containing Switch systems to the passengers (as seen in the video). To sweeten the gift even more, Nintendo included a free copy of Super Mario Maker 2, along with a level specially designed for the Southwest experience.

It looks like those on the flight are using the #SouthwestXNintendo on Twitter to advertise the incredible partnership between the two companies. I recommend checking out the hashtag to view even more photos and videos from excited recipients! Here are a few of my favorites right off the bat:

Already having a great con! We love you!!! Thank you @SouthwestAir & @NintendoAmerica 💖#SouthwestxNintendo pic.twitter.com/ZWfYtRG8Ix

We hadn't even made it to California, and Comic-Con has already begun. Thank you @SouthwestAir and @Nintendo for the free Switch's for everyone on our plane!! #southwestxnintendo #sdcc pic.twitter.com/AJV4mPOyKb

What?! Everyone on board our @Southwest flight to San Diego was greeted by Mario and a @NintendoAmerica Switch + #SuperMarioMaker2 game! 🙌🏼 THANKS #SouthwestxNintendo #Nintendo#SouthwestHeart #sponsored pic.twitter.com/1G9ztIeN36

What?! Everyone on board our @Southwest flight to San Diego was greeted by Mario and a @NintendoAmerica Switch + #SuperMarioMaker2 game! 🙌🏼 THANKS #SouthwestxNintendo #Nintendo#SouthwestHeart #sponsored pic.twitter.com/1G9ztIeN36

(Thanks to @ourfamlifestyle for the photo in this article’s banner!)

What can we say? We are very much on board (pun intended) with this kind of surprise! Please, Nintendo, we want to see more of this generosity — thanks in advance!