Hands-on: River City Girls set to bring a fresh, yet classic bit of beat ’em up fun to Switch

At this year’s Anime Expo, the presence of video games was felt more than ever. Plenty of publishers were in attendance to show off upcoming titles, and thanks to the upcoming Kill la Kill If, the Arc System Works booth was easily one of the most popular. Tucked right there with it though was what I really wanted to see — River City Girls. The just-announced beat ‘em up spinoff of the Kunio-kun series (developed by the Shantae sultans of WayForward) might be coming at us from a series that’s been around for decades, but a lot of its design elements bring a fresh take on the format.

The demo took me and a second player through a single stage of the game, and right away the look of the game had me hooked. The intro cutscene played out via black and white manga panels, with pages turning and speech bubbles appearing to introduce players to Misako and Kyoko — stuck in detention (even if Kyoko doesn’t go to the same school). The writing has tongue deep-in-cheek and the girls’ personalities shine as they set out to save their boyfriends/River City leads, Kunio and Riki. 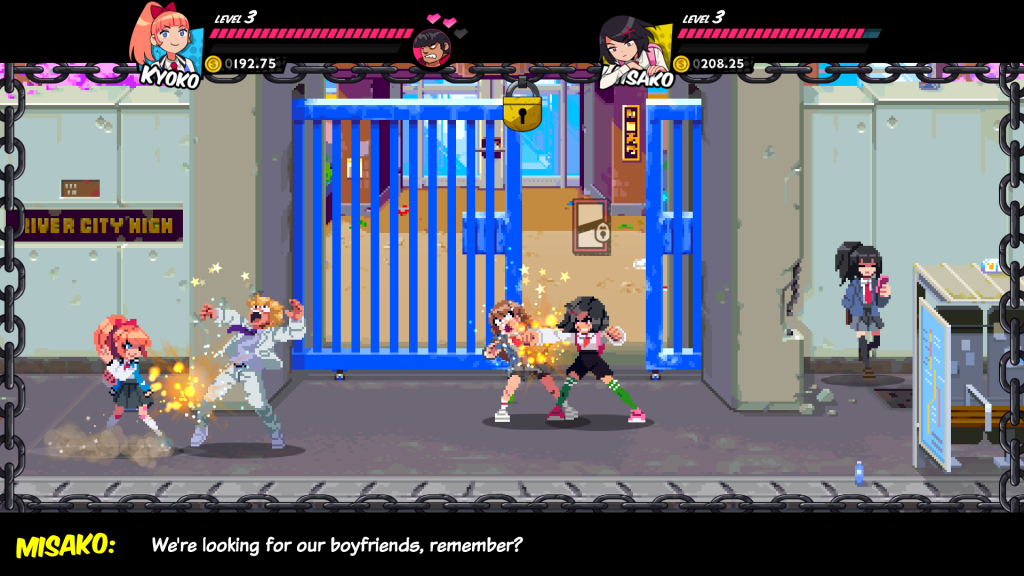 The color choices pop as you set out poppin’ jaws, breaking out of detention as you start to clobber classmates with your fists, feet, and whatever else you can find. It’s familiar beat ‘em up flair here, but with some elements I’ve never seen in the genre. For one, if you’re ever screen-locked (that is, forced to clear out everyone in a given area before progressing), a literal chain winds its way around the frame of the screen until you knock some heads and you’re then allowed to move on.

Another standout feature was the ability to recruit enemies to your side. After clearing a group of enemies, the last one standing might try and beg their way out of what’s coming to ‘em, allowing you to instead coerce them to add some more muscle to your twosome. With a touch of a button you can call in that former foe to perform their own, unique attacks that usually manage to do something the two leads couldn’t. In the demo, I got to see a student pull off a whirlwind kick to clear crowds — and a cheerleader lended some aid with a divekick, giving you new options limited only by a cooldown.

This feature has a lot of potential depending on the variety of attacks, as it somewhat informed my combos and approach to mobs. For the most part, I only had access to basic strikes (your abilities change and grow as you level up, with the released trailer showing some I didn’t get to use), so these additional characters were reliable go-tos for extra damage and range. It’s somewhat tied to luck, as there didn’t seem to be a way to reliably trigger that coercion, but it still shows promise as a feature. 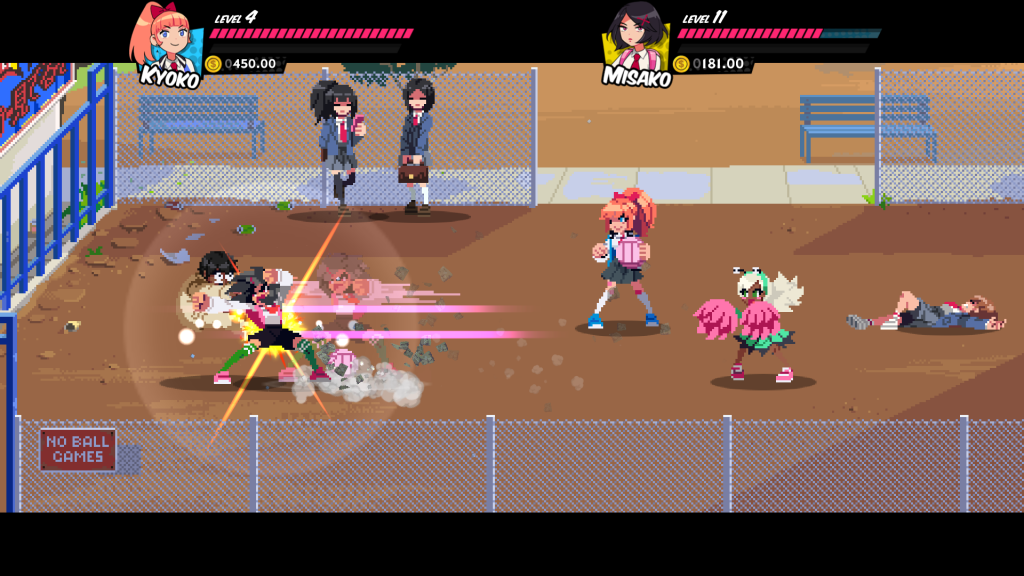 My only real complaint was the occasional inability to tell if I was on the same “plane” as a given enemy. This comes up in the genre often enough, and could be remedied with a bit more practice in the game to get used to its specific hit detection. There was also some uncertainty in how myself and the person co-demoing with me could revive each other in the middle of a fight; though as long as one of the girls made it to the next screen, the one who was KO’d was back on their feet and ready to rumble.

By the end of my demo, River City Girls stood out as a game both fun to play and to look at. While its genre is an old one, it’s important to keep in mind that it almost runs as a parody in tone. It’s a little reminiscent of the Scott Pilgrim vs. The World video game, without losing any of what makes punching out everything in your way satisfying. With elements like character leveling, animated cutscenes, and more boss fights to still see, I’m looking forward to picking up the full version of River City Girls when it drop(kick)s its way to Nintendo Switch and other platforms on September 5th.