Kirby’s Dream Course is one of those SNES games that’s oddly pervasive despite it’s very strange concept – what if golf, but Kirby? It turns out that weirdness is no coincidence, as the game was originally planned as another game entirely before the popularity of the pink puffball proved too lucrative for HAL Laboratory to pass up towards the tail end of development. 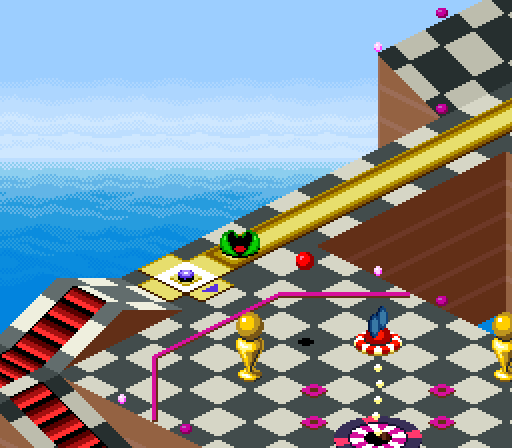 The original game was called Special Tee Shot, and it was being shopped around to press outlets and conferences throughout 1992, the year that Kirby’s Dream Land would win over players around the world. Thus, Special Tee Shot was quietly canned and two years later Dream Course bounded onto the scene. Special Tee Shot did eventually make it into the hands of the public, but only in Japan and via the Satellaview system, meaning it never saw a physical release.

The prototype still exists, though, and last week SNESCentral got their hands on the ROM and managed to dump it. While rough around the edges compared to Dream Course and the Satellaview version, it gives us a glimpse as to what would have happened in a dark, dark world where Kirby didn’t take the world by storm. Be sure to give the article from discoverer Trevor McAleese a read for even more context!