Warning: If you want to stay spoiler-free for E3 announcements, read no further!

It can’t be E3 without a massive leak, right? Well, this year, it’s been let slip that Bandai Namco’s Ni no Kuni: Wrath of the White Witch is coming to Nintendo Switch this Fall.

Reported by Gematsu, thanks to a publicly accessible URL on Bandai Namco’s servers, it appears that two versions of Ni no Kuni will launch later this year: the standard game, as well as an updated version dubbed Ni no Kuni: Wrath of the White Witch Remastered. 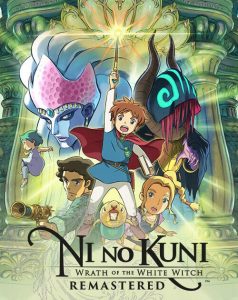 The platform details are iffy at the moment, but a ResetEra thread states that the Remastered version is only coming to PS4 and PC, while Switch players will get the original version without the technical upgrades. This makes sense, given the inferior technical capabilities of the Switch, but we’ll have to wait and see if this gets confirmed at E3.

If you’re unfamiliar with Ni no Kuni, here’s the leaked description of the standard version:

“About Ni no Kuni: Wrath of the White Witch

Journey back to the other world in Ni no Kuni: Wrath of the White Witch. Level-5’s classic tale returns better than ever. Join Oliver as he embarks on an adventure through a world inhabited by new friends and ferocious foes alike in the hopes of bringing back his mother after a tragic incident. With a copy of the Wizard’s Companion in his hand and his trusty friend Drippy by his side, he will travel across this rich fantasy world to tame familiars, take on enemies, and overcome the countless challenges that stand between him and his mother’s salvation.

This charming tale unfolds through the use of animation storyboarded and created by the legendary Studio Ghibli and music composed by the renowned Joe Hisaishi. Ni no Kuni: Wrath of the White Witch combines beautiful animated visuals, masterful storytelling, and a sweeping score to create an epic role-playing adventure like no other.

Plenty of art for the game has come along in the leak, too, including some concept art of the new Remastered logo.

We’ll have to wait and see if the leak details hold true. For all your Nintendo E3 news, keep it right here at Nintendo Wire.