The Pokémon Sword and Pokémon Shield Direct has ended, with new information about several new Pokémon species revealed, including the games’ mascot Legendaries.

The first of the new monsters shown in the Direct is Wooloo, the Sheep Pokémon. This Normal-type Pokémon weighs in at 13.2 pounds, is two-feet tall, and boasts the Abilities Fluffy and Run Away. 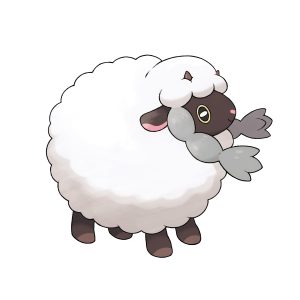 According to the official Pokémon Sword and Pokémon Shield website, Wooloo has an extremely fluffy body, and its fur will grow back in three months even if its been completely shorn off.

Wooloo’s fur is particularly popular in the Galar region in which the games take place, with it being used as both clothing and for carpets.

Wooloo live as a herd and tend to mimic the actions of their Trainer or herd leader. They’re also said to be pacifists, and in events where they desire to run from enemies, they will simply “roll away.”

Next up is Corviknight, the Raven Pokémon. Coming in at a whopping 165.3 pounds, this Flying/Steel-type bird has Pressure and Unnerve as Abilities and is a massive 7’3″ tall. 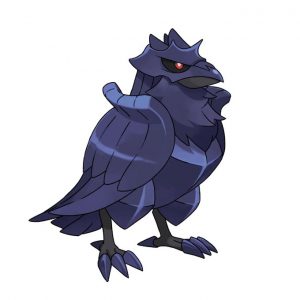 Corviknight is said to be the strongest Pokémon living in the Galar skies, and that other Pokémon foolish enough to challenge it can be scared away with just a “sharp glare and cry” from the raven.

Because of Corviknight’s “superb” flying skills and intellect, many of this species work for a company called “Galar Taxi,” which helps fly people from town to town.

It appears Corviknight will be used as part of Pokémon Sword and Pokémon Shield’s “Fly” mechanic, helping players get around the map quickly.

Drednaw, the Bite Pokémon, is a Water/Rock-type coming in at 3’3″ tall and 254.6 pounds. Its Abilities are Strong Jaw and Shell Armor. 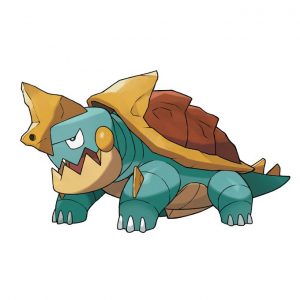 According to the official games’ site, the sharp, jagged fangs of Drednaw can chomp through even rock and iron, and while it’s a heavy Pokémon, its swole muscles allow it to move quickly.

These Pokémon are known to be very vicious and it takes a talented Trainer to tame and handle them. Many Trainers who discover they can’t handle Drednaw’s viciousness will release them back into the wild.

The Flowering Pokémon Gossifleur is a new Grass-type, with Cotton Down and Regenerator as Abilities. It’s 1’4″ tall and weighs 4.9 pounds. 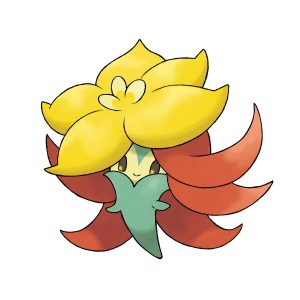 Gossifleur’s pollen has a healing effect and prefers lands with clean, healthy water and air. Its pollen can work on people, and used to be used in tea given to sick children throughout the Galar region as a sort of folk remedy.

Gossifleur travels over long distances by means of getting blown by the wind, controlling the direction of its travels by twisting its body and petals.

Gossifleur evolves into Eldegoss, the Cotton Bloom Pokémon. Like Gossifleur, Eldegoss has Cotton Down and Regenerator as Abilities, and is a Grass-type. Eldegoss weighs 5.5 pound sand is 1’8″ tall. 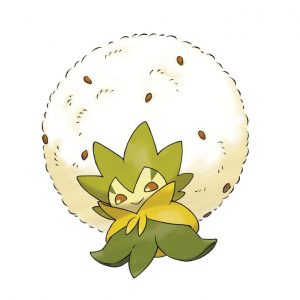 This Pokémon uses its cotton fluff to protect itself from attackers. Its fluff also comes loaded with tiny seeds, which are believed to be very nutritious for both people and Pokémon. Elegoss spreads its seeds through Galar by sending them on the wind.

Finally, we have our box Legendary Pokémon: Zacian for Pokémon Sword and Zamazenta for Pokémon Shield. These Pokémon are “shrouded in mystery” and are “even unknown to those who live in the Galar region.” 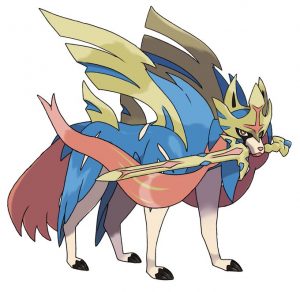 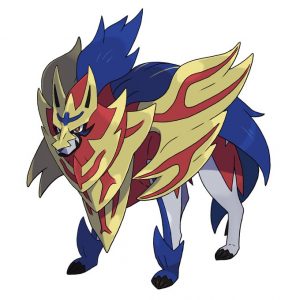 Zacian’s shining blade can cut through anything and this Legendary attacks so gracefully that its movements can event captivate its foes.

Zamazenta’s gleaming shield, meanwhile, can guard it from any attack. Its regal and majestic movements overwhelm any enemies that dare face it.

So? Thoughts? Do you like any of the new species? Let us know in the comments!