If you’ve been a frequent reader here you’ll know that I love Puyo Puyo, Panel de Pon, and other cute competitive puzzle games through and through. A new challenger has appeared in that block-busting, pattern planning ring thanks to Nicalis and a surprising assortment of partnerships. Off the heels of Blade Strangers, Crystal Crisis steps up to make these characters a little more stylized, but just as ready to throw down with each other. It might have a few little problems along the way, but if you’re into the genre, either of its influencing ones, or you simply like the cast, then it’s worth checking out.

Putting the pieces together

The core gameplay of Crystal Crisis borrows from falling block puzzle and fighting games in equal measure. Fittingly enough, the biggest inspiration seems to be Super Puzzle Fighter II Turbo, both in terms of how it plays and how it presents itself. Your goal is to place colored blocks into your playing field in pairs, rotating and moving them as you like and ideally arranging like colors together. It’s not enough to match up colors though, with the titular crystals being the key to victory. 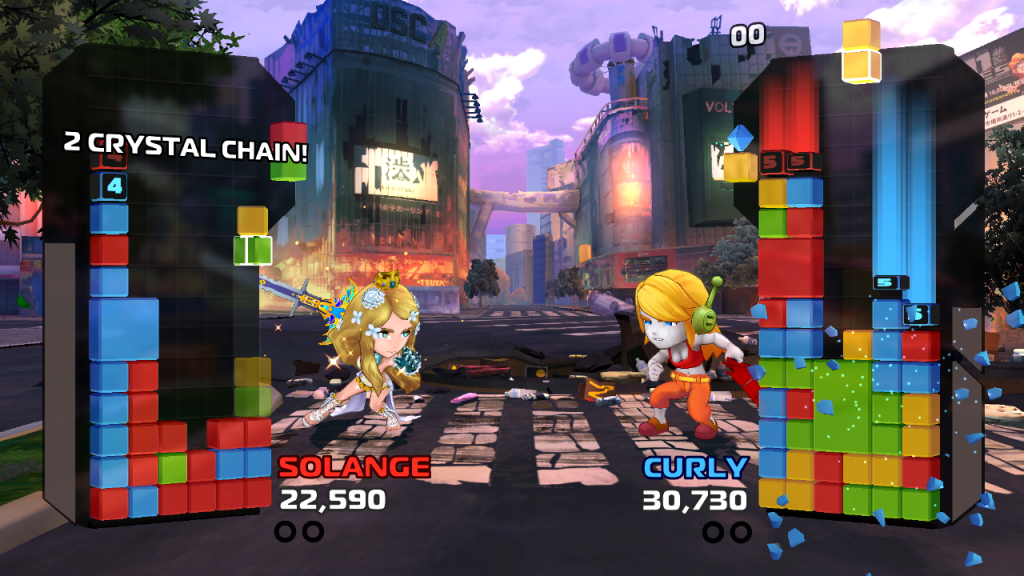 Once you place a crystal of the corresponding color beside a block, it and every other block of the same color connected to it will burst and send a rain of blocks to your opponent’s board. These attack-fueled garbage blocks count down from five, preventing them from being cleared normally until they’ve been on the board for long enough — making things that much trickier to manage before the blocks reach the top and you’ve got a real crisis on your hands.

When all of this comes together, Crystal Crisis becomes a game of both long term planning and split decision making. You have to be able to react to your opponent’s attacks while also maintaining your own. The most damage results from lining blocks into clusters that merge together as long as their length and width are equal (2×2, 3×3, etc.), and then triggering them with a crystal. This can be tricky, but each character has a pattern that their countdown block garbage falls in, rewarding players who put the time in to know what they’re up against so they can set up their boards properly.

Like Blade Strangers before it, Nicalis has gotten plenty of its characters all together with some surprising guests. Cave Story and 1001 Spikes get the most roster real estate, but other titles make the game even more interesting — for example, where else can you have Astro Boy face off with (The Binding of) Isaac? The 3D model treatment renders some characters better than others, but it’s still a nice, unifying look carried by the characters being voiced (mostly in Japanese) and animated during matches to give them some personality. Backgrounds are similarly rendered, and every corner of the game is carried by a catchy electronic soundtrack. 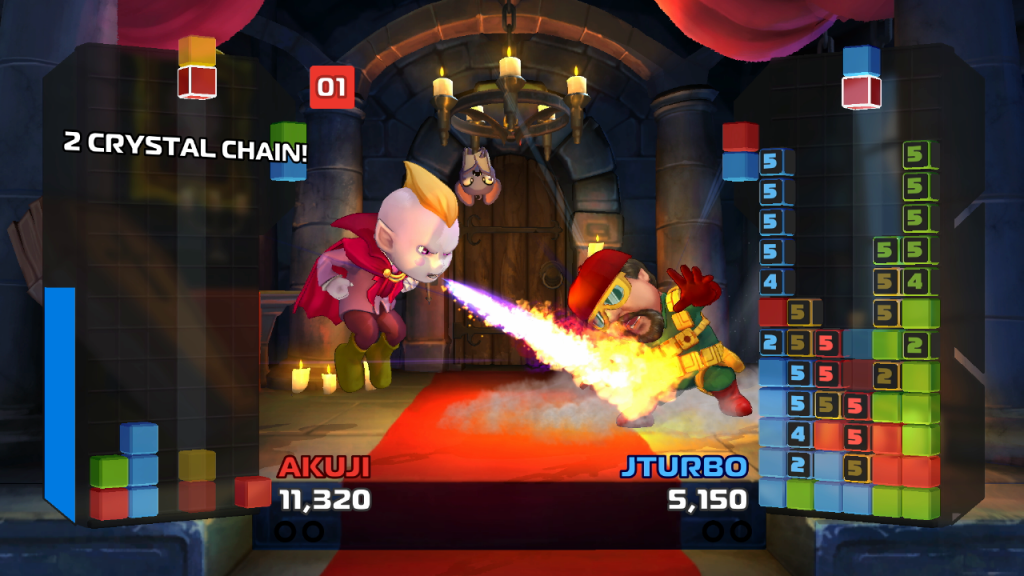 I felt a greater learning curve here than I did with other competitive puzzle games, but after a couple sessions with the game I became much more competent and consistent. The included, Johnny Turbo hosted tutorial does a good job of outlining the basics, but the best way to improve is to play and practice both with others and the various included game modes. Arcade is a great place to test out what makes each character distinct from the next, though even on the lowest difficulty things can get dicey if you let up. To me, this is all great news and marks the game as another exemplary member of the genre.

Unique here compared to other puzzlers are the character-specific Burst techniques. As you play, you’ll build up a meter that’ll allow you to pull off special, board-changing techniques. Each character has an attack and defense Burst to use, and knowing when to use which adds another layer to fight-to-fight strategy. They can do things like simply clear a few rows from your board when things get dicey, to outright breaking your opponent’s well-built clusters into weaker attacks. Some even take away basic elements of the game, like the ability to hard-drop blocks or even see what color your board is. I’ve seen an interesting variety, and having these super combo inspired techniques further differentiates this one from contemporaries and pushes Crystal Crisis a little closer to a fighting game. 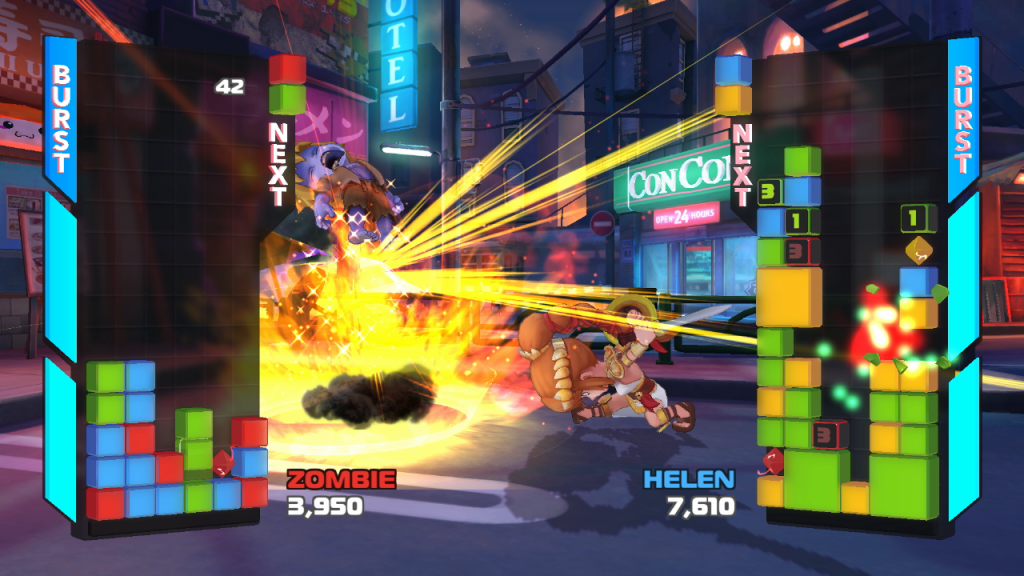 It’s also possible to send blocks from the left side of your board to the right, wrapping around and ignoring the borders of the playing field. It sounds simple enough, but it adds a whole different degree of strategy. You can split blocks, sending half of one to the opposite side of your board in order to better build your clusters and chains or to keep a crystal separated ’til you actually want to use it. If this and bursts sound a little much, and you want something more classic, there’s an option to toggle them both off; however, I feel they ultimately strengthen the game and are worth maintaining to get the full Crystal Crisis experience.

A diamond in the rough

Speaking of experience, the game does feature a story mode. It puts pairs of characters against each other with a little added dialogue, building up to encounters with the more antagonistic cast members and a unique final boss fight. Other than the added bits of character and Peter Cullen’s incredible voice work narrating the whole thing, there wasn’t much to story mode. Thankfully, for those who just want to see their favorite faces interacting, the difficulty here is lower than other modes, making it a lighter option for newer players.

Really though, the bulk of your time with Crystal Crisis will be best spent playing with others either locally or online. Up to four can face off, and in a situation like that, things can get rightfully hectic. It takes what can be an intense one-on-one kinda game and makes it a more frantic party title, fitting for a crossover and fun for many at once. That learning curve can still be a factor, what with all the moving parts and systems at work, but once that’s passed you’ve got yourself another great multiplayer game on Switch. 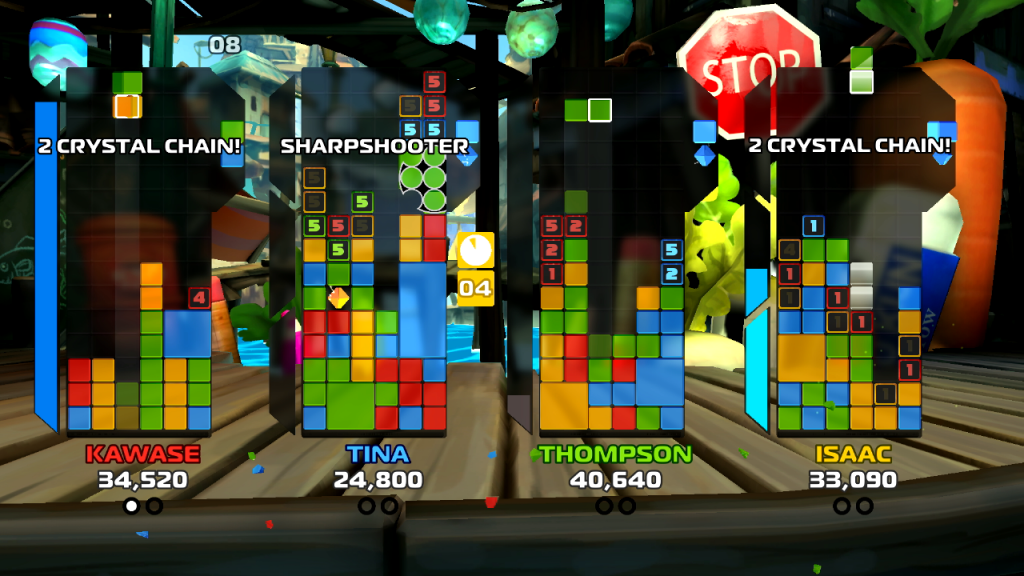 I don’t have a lot to complain about here other than the game’s load times. It can take a while to get from startup to a match. Even once you do, there’s some other slow elements, like certain Burst animations that can throw off the pace of a round. I should also warn you that about half the cast needs to be unlocked before you can play as them. I’ve never personally been pit against hidden characters, but anyone specifically wanting to play as Isaac or Umihara (or to have a full, tournament ready roster) will have to put in a little work to do so.

Even with other puzzle fighters out there, Crystal Crisis manages to make a name for itself and stand out with its unique mechanics and roster. Backed up by fun and addictive gameplay, it’s a welcome member to the Switch library that’s only really dampened by its load times. It doesn’t have the flash of a big budget release, but if you’re up for another indie crossover courtesy of Nicalis that’s full of heart, then look no further than this gem. 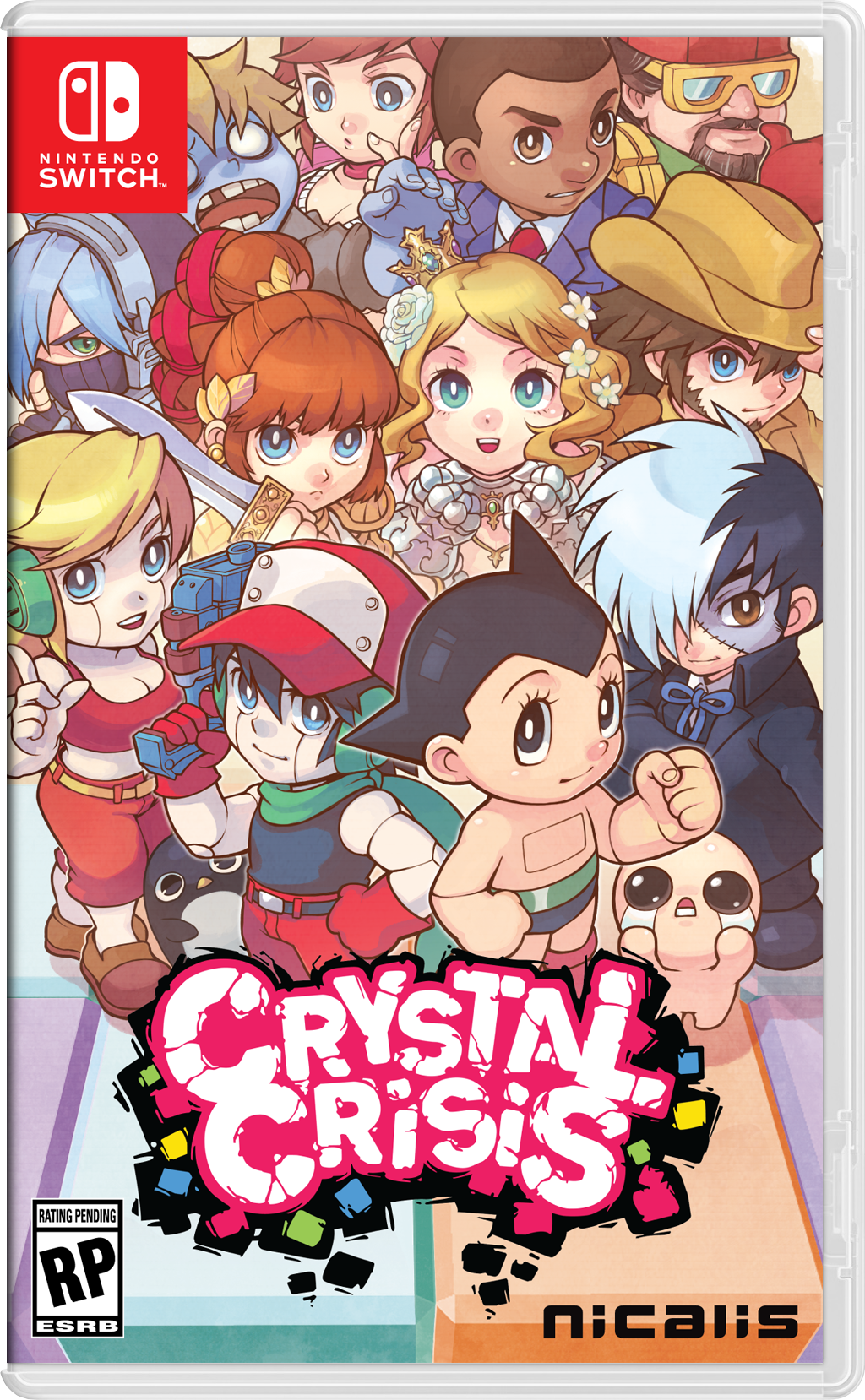