Sonic is the fastest thing alive, but every so often he gets behind the wheel to give the rest of his friends a fighting chance. The latest entry in Sonic’s karting adventures, Team Sonic Racing, has a few noteworthy issues, but it’s overall a worthy successor to Sumo Digital’s previous Sonic racing titles.

Sega and Sumo Digital made a controversial move by stripping away the characters and tracks from other Sega properties, which is sure to alienate some fans. However, if you give Team Sonic Racing a chance, you’ll find the same amazing racing mechanics and track design that we’ve come to expect from Sumo, with a killer soundtrack and fun, but flawed, story mode to go along with it.

Team Sonic Racing’s Team Adventure mode tells a new Sonic story about Dodon Pa, a mysterious Tanuki who invites Sonic and his friends to race in a series of increasingly dangerous races and challenges on the game’s 21 tracks. The story is told through pre-race dialogue scenes with full voice acting and still images of the characters. There are no real cutscenes in the game, with the opening cutscene even being excised from the Switch version entirely, and the storytelling in the adventure mode makes it loud and clear that Team Sonic Racing is a budget title.

The story is extremely nonsensical and forgettable. The first half of the plot has no real substance, and the second half introduces a plot twist that’s not rooted in anything from the first half. Sumo made it far too easy to skip these story scenes, to the point where I accidentally skipped about 30% of them. On the world map of adventure mode, hitting A to launch the level actually skips the story. If you want to watch the dialogue before the race, you actually have to hit Y. It’s a terrible decision that tells me that Sumo Digital is well too aware of how skippable Team Sonic Racing’s story really is.

Luckily, the rest of Team Adventure is a great time. Up to three players can go through the entire mode cooperatively, as long as you pick characters from the same team. The levels are a mix of races, grand prix competitions; and special game modes like ring challenges, Eggpawn hunts, and drifting competitions. It’s a nice variety of modes that keep things fresh, and the optional objectives add another level challenge for those who seek it. 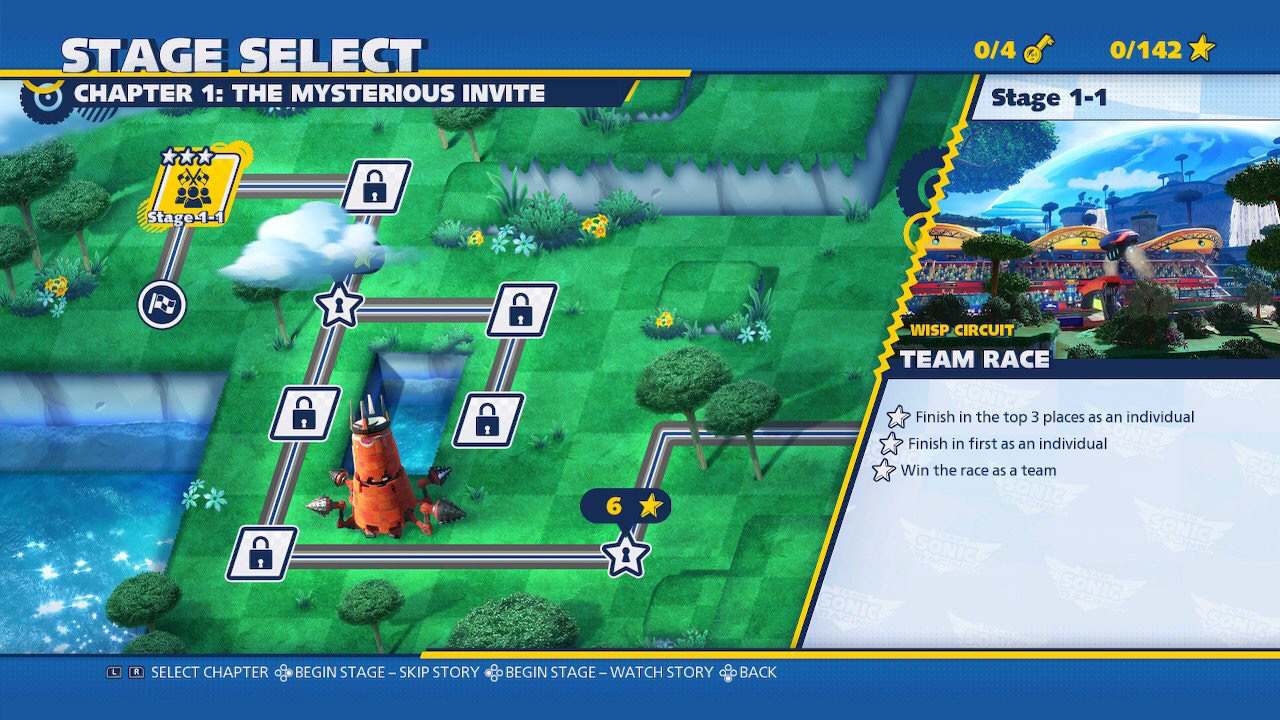 Team Adventure mode is a blast thanks to Team Sonic Racing’s incredibly strong track design. The 21 tracks take on classic locales from throughout Sonic’s history, and racing through them is consistently fun and intense. My personal favorite is Market Street, which takes after Sonic Unleashed’s Rooftop Run. Nine tracks return from earlier Sonic racing games, but most are reimagined in a way that makes them feel new. The mechanics are largely the same from the other Sumo games as well, and I’m happy to say that the racing still feels fantastic.

It took about seven hours for my group of three to beat the story mode, and there were still tons of optional missions and objectives for us to complete. I was a big fan of Team Adventure mode, and I’m sure I’ll go back in the coming weeks to try and complete the tougher objectives.

Apart from the adventure mode, you can race locally with up to four players, an online racing is offered, too. The options for these modes are pretty barebones, but it’s perfect for pick-up-and-play action with a group of friends. Online seems more frustrating because, like Splatoon, there’s no way to guarantee that you end up on the same team with your friends. For the best experience, this game should be played locally.

The 15 characters in Team Sonic Racing are divided into five teams that each contain a racer from three categories: speed, technical, and power. Speed racers have the best top speed, technical characters can drive over any surface without slowing down, and power racers can barrel through obstacles without slowing down. The base stats for all three characters are wildly different, and this led to some early imbalance. 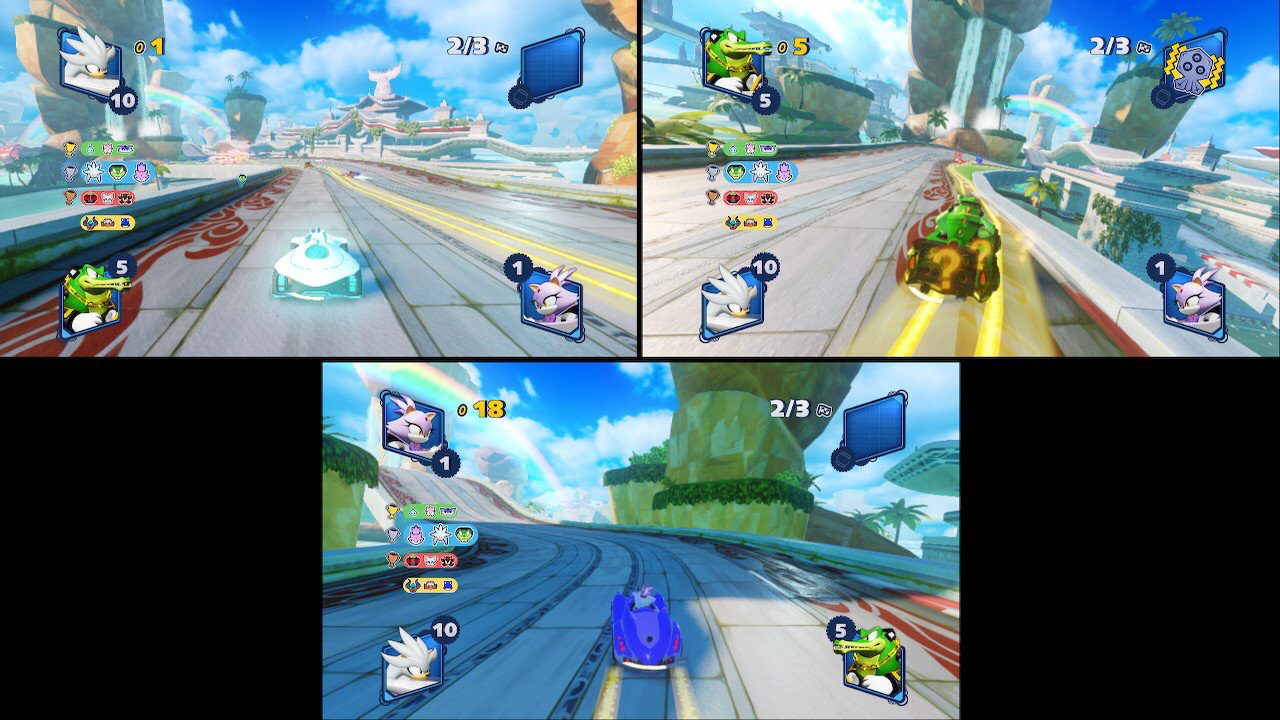 Power characters don’t have the best top speed, but they have the highest boost statistic. Boost takes into account the bonus you get by drifting, using speed pads, slingshotting off teammates, and using specific power-ups. When I was playing as a speed character with a couple friends, my friend who was playing the power character blasted way ahead of the competition. He won almost every race, and it wasn’t until we unlocked enough parts to upgrade the speed and technical cars that it felt more balanced.

The biggest factor in Team Sonic Racing that differentiates it from other kart racers is the team racing mechanics. The field of 12 racers is split into four teams of three, and your teammates are instrumental if you want to achieve victory in each race.

The team member that’s the farthest ahead will leave a golden slipstream trail behind them for the other two members to drive in. By charging up in the stream, you can slingshot out of it for a speed boost. When playing on a team with friends, it’s surprisingly fun to communicate about which path the leader is taking, so the other two can be sure to follow the same path in order to catch up. 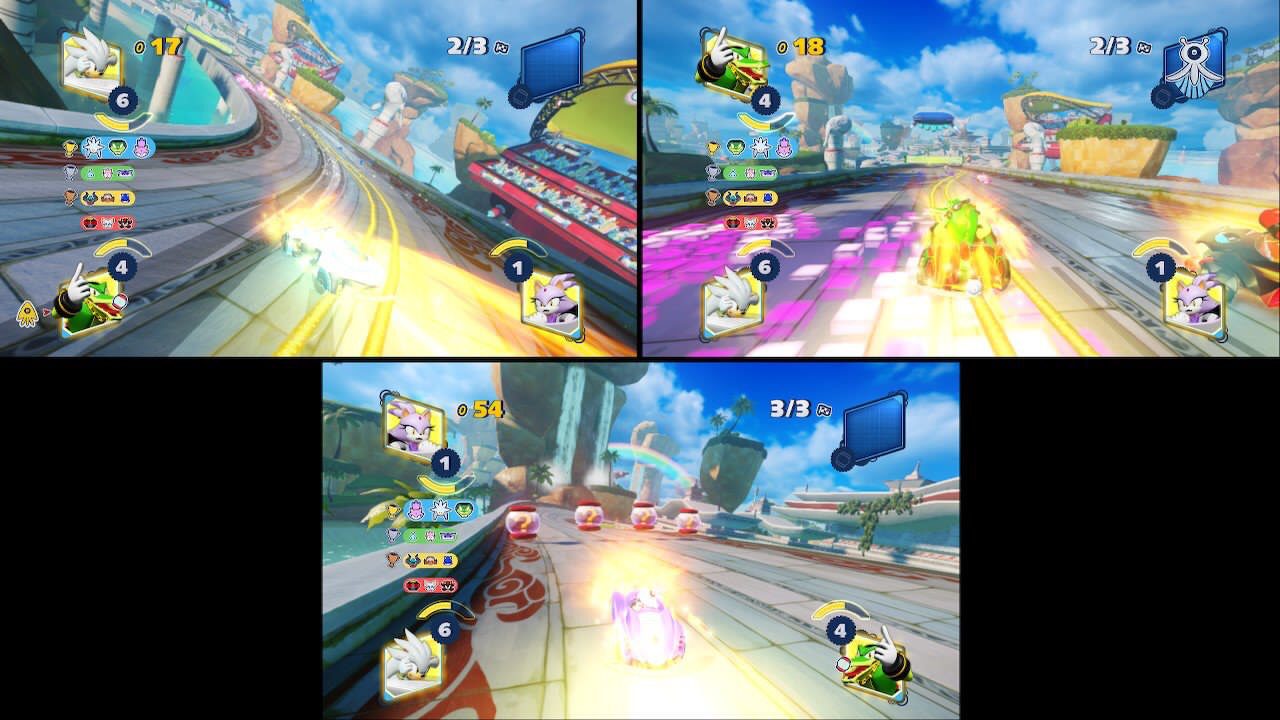 If a teammate gets hit with an item and slows down, the other two teammates can graze them and give them a skim boost, which will launch them back up to competitive racing speed. Additionally, if you have an item you don’t have a use for, you can offer it up to your teammates for a chance to transform it into a better item.

All of these team-based moves contribute to your shared team ultimate meter. Once the meter is fully charged, each team member can launch their ultimate boost, which is 10-15 seconds of incredibly high-speed racing with invincibility on top. To beat the other teams, pulling off enough team moves to get the ultimate meter is an absolute must. It’s fun to balance focusing on the race with building up the meter, and it adds another layer of strategy on top of the kart racing formula.

Playing as a team of three with a couple friends is an absolute blast. There’s far more constant communication than I expected, and it really feels like you’re working together throughout the race. Playing with AI teammates, however, is not nearly as successful. While I was impressed with how often the AI teammates used the skim boost when I was slowed down, they rarely offered up item boxes, which is crucial for earning the best power ups and building up the team meter. Additionally, when one of my technical type teammates was leading the group and leaving the slipstream trail, they drove over tons of surfaces that power and speed-type characters can’t traverse without slowing down. Playing with two friends makes you feel like you’re working in a team; playing with AI teammates is all about making the best of whatever your two teammates randomly give you.

I had the opportunity to spend time with both the Switch and PlayStation 4 version of Team Sonic Racing, and there are definitely some differences. The Switch version runs locked at 30fps, while the PS4 version runs at a smooth 60fps. In split-screen, and especially online, I noticed a few moments when the Switch version dipped below 30 frames, but the game was never unplayable. The resolution on Switch isn’t quite as crisp as on the PS4, but it still looks great on Nintendo’s system. The Switch version also doesn’t contain the intro movie — it just skips straight to the title screen. It’s not a huge deal, but it’s an omission worth pointing out. Overall, I was satisfied with how it ran on Switch, and some players might find portability worth the tradeoff of slightly lower performance.

The Switch version also has local wireless, but I wasn’t able to test that feature out.

One strange difference was the audio balance between the two versions. The in-race character commentary in the Switch build was significantly louder than it was on the PS4, but these settings were easily adjustable in the settings menu.

Both on Switch and PS4, the game is not without its glitches. On a few occasions I drove through walls and fell through floors, but it didn’t happen often enough to feel like a huge issue. Often, the glitches that ensue are entertaining, so I didn’t mind too much.

Like most Sonic games, the soundtrack in Team Sonic Racing is amazing. Crush 40 is back for the first time in a decade, and it joins the likes of Hyper Potions from Sonic Mania, as well as a few other artists. The result is an amazing fusion of Sonic Adventure-era rock with the new synthwave feel of Sonic Mania. I hope this music is the new feel for the franchise moving forward, as it establishes a new identity for the series that feels like the perfect mix of classic and modern. Hearing classic tracks reimagined by Hyper Potions is awesome, and there are even some fantastic callbacks to the Sonic R soundtrack.

In the garage, you can customize the look and feel of each character’s kart. To unlock extra parts, you spend credits you earn in-game (no microtransactions here!) for a chance to randomly unlock parts. I wish I could choose to buy parts for my character rather than playing the odds in a random gacha game, but the races are liberal enough in shelling out credits that it’s easy to unlock parts quickly. You can also customize the color of your car, and it’s really fun to one unified car design for your whole team to use. 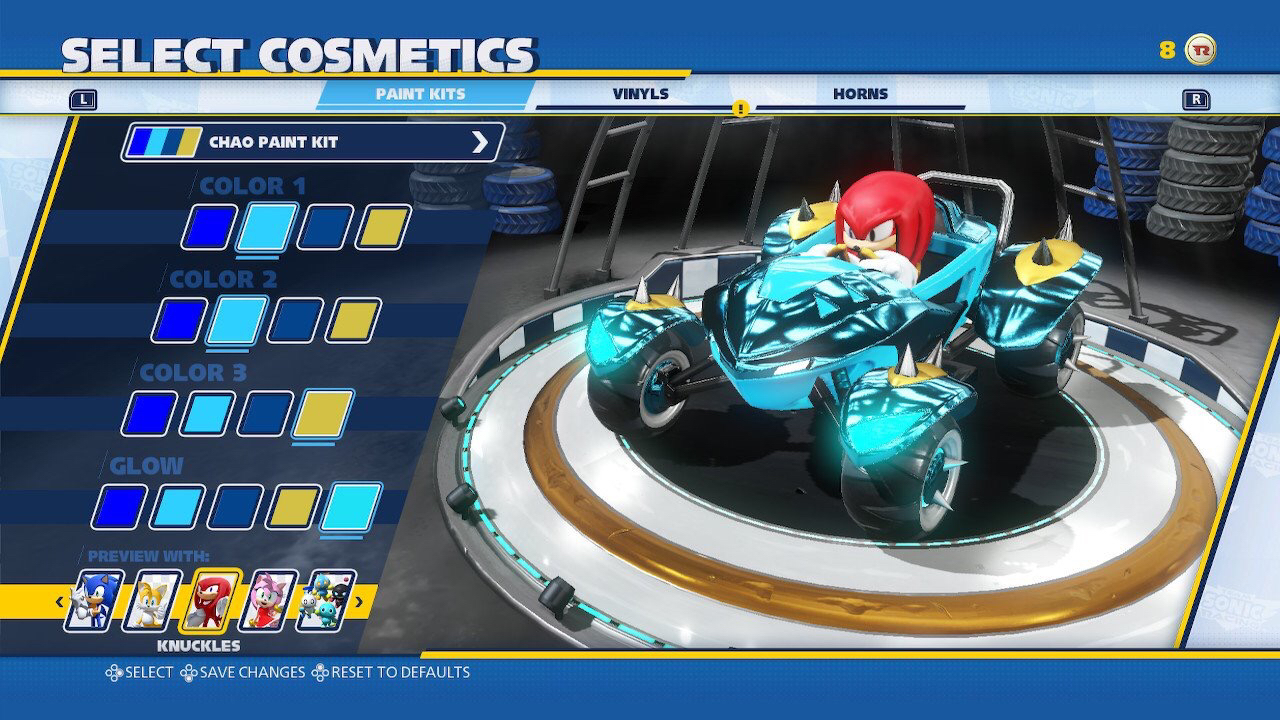 Like most kart racers, Team Sonic Racing is a great time with friends, but not nearly as much fun by yourself. The track design is superb, and cooperating with teammates is a blast. There are some technical issues, and some clear signs that this game is a budget title, but it’s still a great racer that’s worth picking up for any Sonic fan, or for anyone who’s looking for a great new party game on Switch. 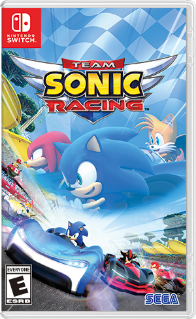