Earlier this week, Uniqlo finally shared the winning designs from their UT Grand Prix 2019 contest where the theme was all about Pokémon. Almost instantly, a few sleuths on Twitter discovered the the Grand Prize winning design technically went against the contest’s rules.

Within Uniqlo’s fine print, any designs submitted could not have been sold previously. Artist Li Wen Pei clearly violated this rule and still lists the design (on a t-shirt no less) for sale on Taobao. 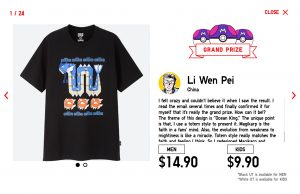 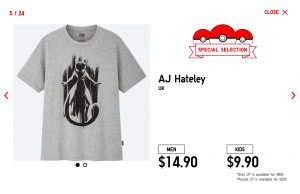 Wondering if any further action would be taken, Uniqlo has now given the following statement:

UNIQLO, the Japanese global apparel retailer, today announces that it has disqualified the Grand Prize winner and another finalist in its Pokémon-themed UT GRAND PRIX 2019 design contest after learning that the designs in question were not in accordance with the terms of that competition. UNIQLO will not award the Grand Prize to another entrant or sell merchandise featuring the designs.

UNIQLO apologizes to all stakeholders, including those who looked forward to buying an item with the Grand Prize-winning design, and will take appropriate measures to prevent a similar situation from recurring.

It appears that when the alarm was sounded, all winning entries were looked at, which revealed that another design that was sold previously. While Uniqlo didn’t state which selection finalist was disqualified, it’s easy to piece together, thanks to our previous report and The Wayback Machine.

Artist AJ Hateley’s Mewtwo Sumi-e ink design was sold previously in 2016 via GAMETEE, an online retailer where Hateley is the lead art director. Part of a “Shadow Series” line, additional t-shirts featuring Gengar and Pikachu designs made up the collection. While the shirt is no longer sold on GAMETEE’s site, a Tumblr post from 2016 advertises the sale, thus proving Hateley violated Uniqlo’s rules.

This is, once again, a friendly reminder that “the internet is always forever” and that you should read the fine print when signing a contract and/or entering a contest with such strict guidelines.