Time for me to fess up: Super Mario Maker wasn’t exactly a big deal for me. Don’t get me wrong, I played it and conceptually thought it was incredible both in general and as an example of why you shouldn’t laugh at the Wii U. That said, I’d have traded it for Kirby Maker in a heartbeat and fell off Mario’s create-play-share-athon pretty quickly. Now we’ve just had a whole Super Mario Maker 2 Nintendo Direct and are about a month away from this souped-up Switch sequel — and more than ever I’m back on board.

For one, I’m playing my Switch a whole lot more than I did my Wii U, and it’s easy to see the appeal of infinite Mario courses anywhere you go. We live in a free Wi-Fi world and it’s the perfect playground for the platformer platform. As someone who likes to write down my ideas as they come, being able to start building a course right away, anywhere at all, suits me as a player. Instead of having a notebook of concepts to consult once I’m back home, I can just build on the fly — sign me up.

All of that’s pretty much a given though, and I’ve had it in mind since the game’s debut earlier in the year. Then why, Ricky, did it take ’til this Direct to prompt a reaction? Because now we really got to see what’s new in the toolbox and how this is an even better love letter to Mario old and new than the last. 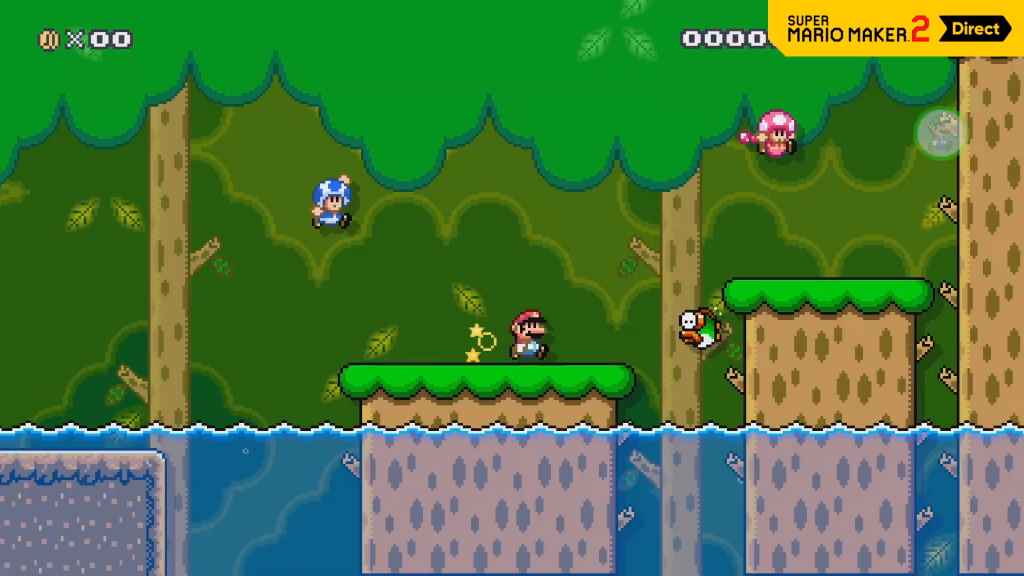 Some of what was shown also sets this up to be more of a “game” rather than just an idea machine, which is great for anyone who doesn’t want to fuss with the whole Maker thing and just wants more Mario; or those who aren’t able to utilize the (now paid) Online services. It’s clear that thought has gone into how to make this a more rounded experience for players of all sorts, while building upward with what already worked well in the first place. In other words: the potential for a sequel to absolutely best the original.

If I had to boil it down to a few particular points, the show-stealer for me was the new Moon stage element. Piggybacking off the also welcome Angry Sun, what I’m calling the “Just Happy to Be Here Moon” adds in variations of stages that add even more variety to the game. Low gravity, floating enemies, spooky Ghost House lighting — sign me up! 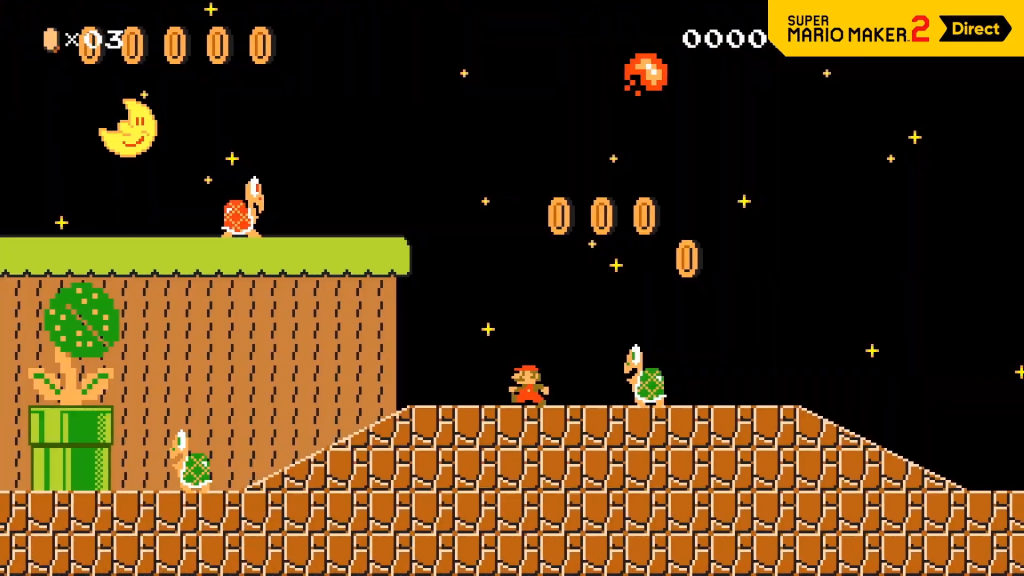 Especially when paired with new course themes like snow and desert, Nintendo’s exponentially increased the kinds of stages players can devise. If you want an icy nighttime snowscape with Banzai Bills homing in on you in Super Mario Bros. 3 visuals, you can do that, and then some. That, plus the oft-requested slopes and other features (rising water! snake blocks! screen scroll stopping!) ensures that anyone who just wanted more to work with should be beyond pleased.

But what if all that means nothing to you? What if you want to see the game grow mechanically versus what could be seen as just content-wise? That’s where the 3D World style comes in. Existing outside the four “visual” styles, 3D World makes things appear much more dynamic while offering signature elements of those games like the Cat Suit and clear pipes. Several unique enemies and gimmicks are here too, with the Blinking Blocks alone being enough to get me on board. Plus, Koopas in cars make everything better… and if putting Bowser in one turns it into his purple swagwagon, then we have reached peak Mario. Or have we… 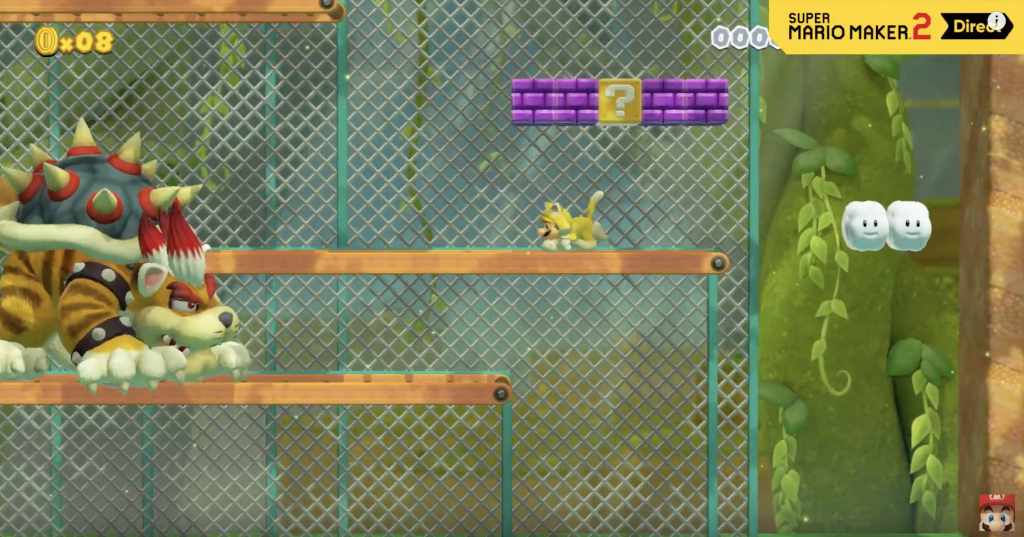 A couple subtle potential teases have me thinking about what’s left for the game to show. Nintendo’s gotten in the habit of revealing nearly everything in their titles before release, and with E3 less than a month away there could be a couple surprises left. Super Mario Bros. 2 is distinct visually and is probably the most requested visual style, but with its vegetable plucking and other vastly different tricks it could easily be an Extra Style while remaining true to form. The Direct also used New Donk City music for no discernible reason, and even if locked to a 2D perspective I’m imagining how capturing could really bust open Mario Maker 2. Plus, there’s always blocky N64 era Mario, to really cover all the bases.

But now I’m getting ahead of myself with that kind of speculation. There’s also a Story Mode and up to four-player multiplayer that we know we’re getting, the latter shattering barriers and bringing competitive and co-op to Mario styles that we never could’ve dreamed of in an official capacity. New search mechanics make finding stages to play that suit your tastes a little easier, and that Endless Mode sounds great as long as the courses in the rotation don’t fall too deep into the ever popular “why the hell would you make a stage like this” category that people love to stream (at least not until further into the gauntlet). Everything sounds good on paper and present “Direct” to us, but I do have a few concerns.

For one, there’s the fact 3D World is somewhat locked away in its own corner. Not being able to run those mechanics and enemies in, say, Super Mario World’s visual style is a bit of a letdown. I’m sure there are plenty of practical reasons why it wasn’t possible for this release, but to me it lessens the universal, “make it as you like it” approach the first Mario Maker had. This will make those levels no less fun to play, and visually they look fine as-is, but it’s still an unfortunate casualty. 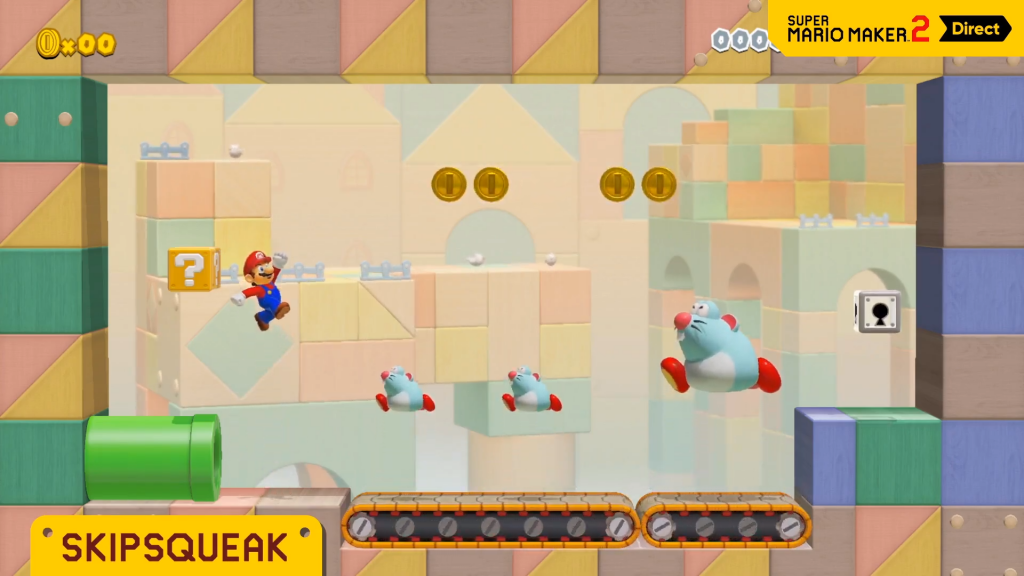 Speaking of, there’s the lack of amiibo mentioned anywhere at all. The amiibo based costumes in Mario Maker were some of our favorite uses of the figures ever; and with plenty more figures released since (and more costumes that came along as simple free downloads), it’s strange to see them left out of the presentation. It’s another case of amiibo being quietly sidelined in big Nintendo titles, and while it’s still possible they could make the release, there’s still no new figures in sight either.

There’s also the matter of online being, by the look of things, completely locked behind a “this wasn’t on Wii U” subscription. While there will still be over 100 courses via Story Mode, the potential inability to download player-made courses is significant. It also looks like multiplayer as a whole might be gated, which might deny one of the bigger additions from players. I’ve never been one to complain about the Online Subscription, especially when looked at in relation to the entire digital landscape of console gaming, but this could be the game most impacted by it since Splatoon 2.

With only about one month standing between us and Super Mario Maker 2, I’m walking away from this Direct more excited than I’ve been for the title and more enthused than I ever was for the original. If you’re a licensed contractor of a Mario fan, then maybe you’re less into it (or even more into it). Bottom line here is that it’s made a believer out of me, and with it almost certainly playable at E3, you look forward to us reporting back ahead of the game’s release with a final verdict.