My childhood memories of card-based video games aren’t pretty. Kingdom Hearts: Chain of Memories made me want to throw my GBA across the room in frustration — Baten Kaitos went right over my head with its in-depth mechanics, and somehow I went into Phantasy Star Online Episode III: C.A.R.D. Revolution inexplicably expecting an action RPG. So, when Image & Form announced that the next entry in the SteamWorld series would be a card-based RPG of their very own, I was very skeptical.

It turns out my concerns weren’t warranted, as SteamWorld Quest has the best turn-based combat system I’ve seen in years, and it’s all thanks to those pesky cards.

Let’s dive into that combat system first, since it’s where the game shines brightest. On the surface it’s similar to many turn-based JRPGs, with a party of three heroes squaring off against various colorful enemies with their own strengths and weaknesses. Rather than select from menus, however, you pull from a deck of cards, with each character contributing eight each to the pool. These let you pull off sword slashes, magical feats, buffs, debuffs, and more, though typically you can only play three cards per round. 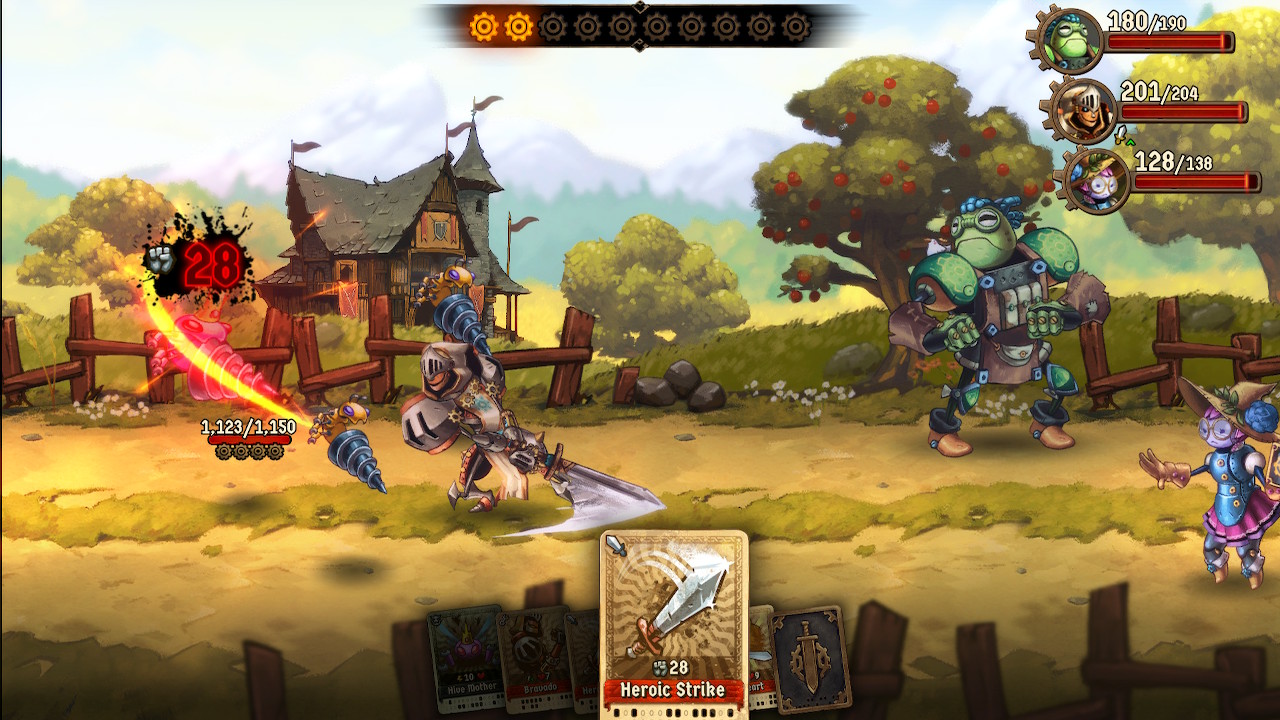 At first, this seems very simple, as you find yourself relying on your most powerful attacks to mow down foes, but soon enough you have to start accounting for the Steam Gauge. Certain attacks build this gauge up, and some cards require a specific amount of steam power in order to activate. This leads to interesting plays — do you focus your turn on building steam power, or do you go all out with a single hero, activating the special ability that unleashes after you play nothing but their cards?

The characters also expand outside of their archetypes. To avoid spoiling some awesome late additions, let’s focus on the three who join first: the aspiring hero knight Armilly, the alchemist Copernica, and the reclusive inventor Galleo.

While you’d be right for thinking Armilly deals damage, Copernica slings spells, and Galleo acts as a tank, soon enough you find or craft cards that expand their capabilities. Copernica has plenty of protective spells, for instance, that could totally negate the need for Galleo’s healing and shields, while Armilly can infuse her blade with some elemental power of her own, meaning you can focus Copernica’s deck on other matters.

This level of freedom can feel overwhelming, especially as you get more and more cards, but at the same time it’s so simple to re-arrange them. Even if you do die, you don’t lose much — you simply return to the last checkpoint, keeping any EXP and items you earned along the way. While you’ll have to make your way back, you can rearrange your deck accordingly to take down the foes more efficiently. 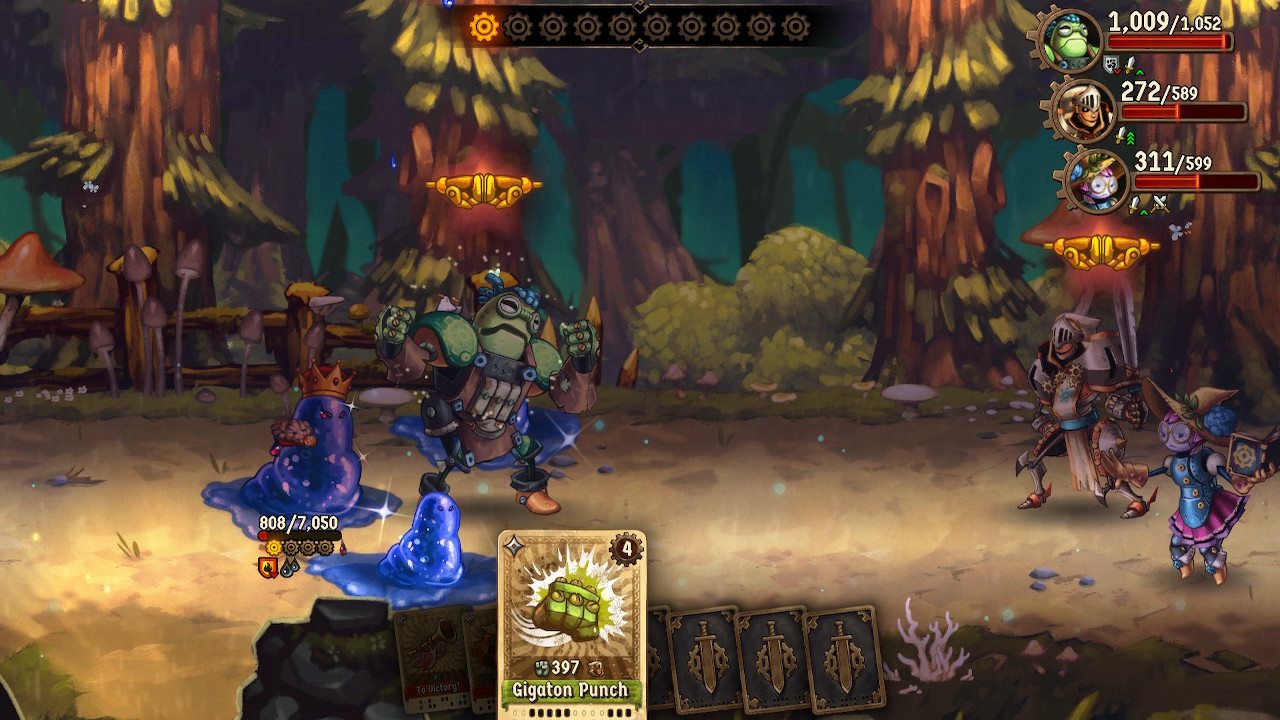 Then there are the combos, which are frankly one of the most satisfying things I’ve ever pulled off in a video game. Just as an example, as I was fighting a mid-game boss, I had ended up with a full steam gauge. One of the later party members has a move that unleashes many strikes at once, depending on how full your steam gauge is. So for that turn I used a card that bolstered his critical hit rate, then boosted his attack power, and finally unleashed hell. More than one third of the boss’ HP dropped at once, and combined with some impactful visuals and gorgeous sound design, I was left with a massive satisfied grin on my face.

Of course, great combat is all well and good, but any RPG worth its salt needs a solid story, too. Thankfully, SteamWorld Quest delivers on that front too, telling a fantastical, silly, and touching tale that ticks all the boxes. 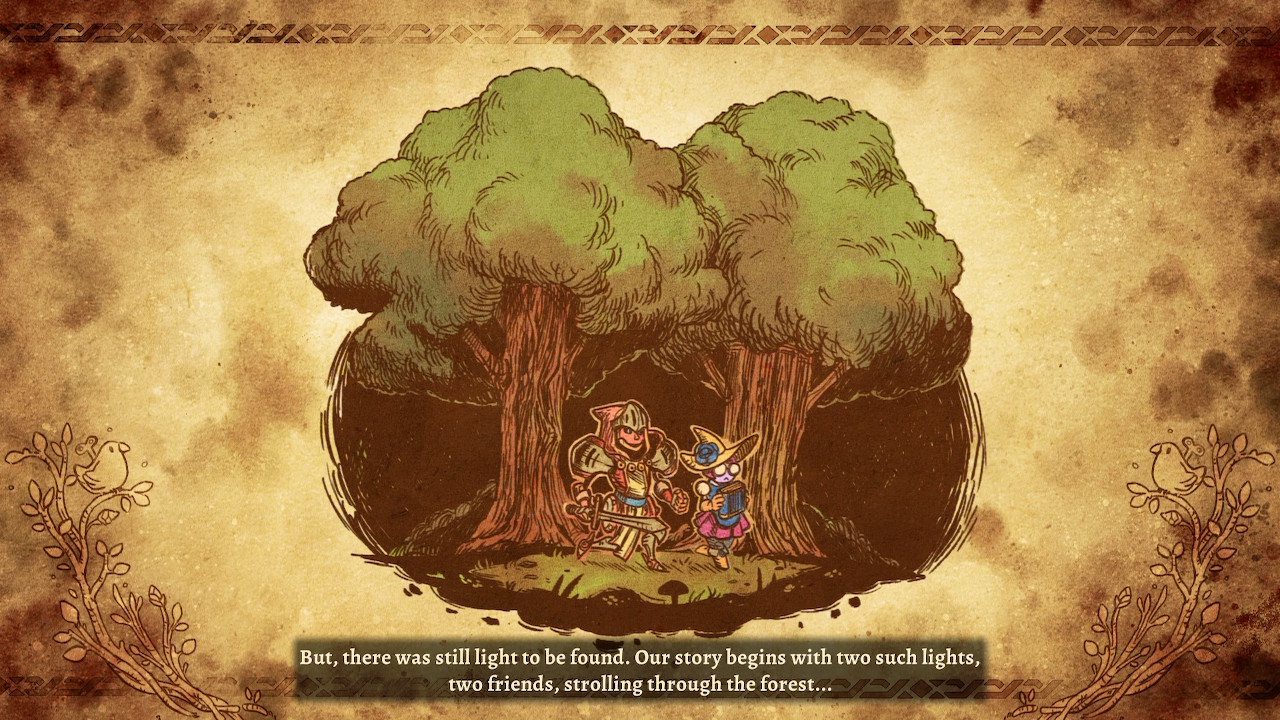 The story has a humble beginning, as the aforementioned Armilly and Copernica explore a forest for a mushroom. Soon enough, however, an evil army invades their home village and kidnaps the local Hero Guild. Armilly, being the aspiring hero she is, calls upon the party to uncover the mystery and stop the evil-doers. And thus the adventure begins.

While it may some a bit rote on the surface, it winds up exploring what it truly means to be a hero, and the other characters get their chance in the spotlight, too. The sense of humor manages to navigate the fine line well, with characters stopping with the jokes whenever the situation gets too dire but not being afraid of lightening the mood when they’re out of it. 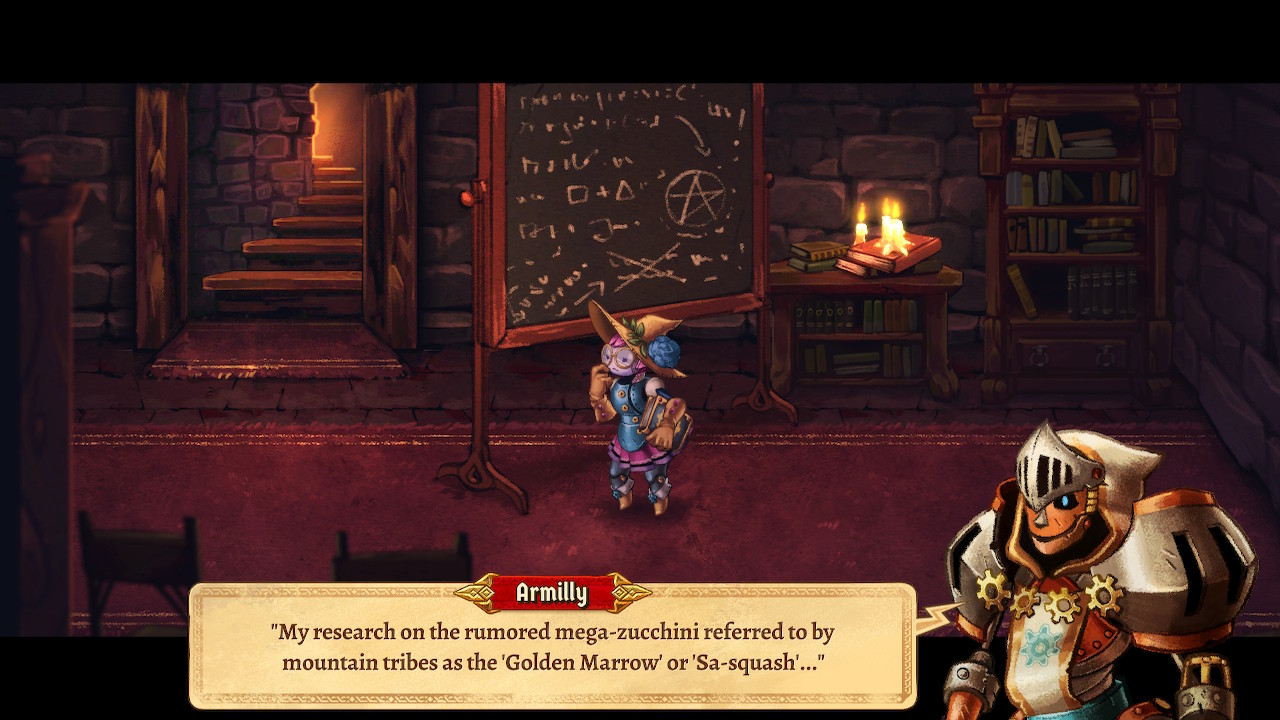 Something I was very impressed with too was the level of animation and detail on the characters, who move fluidly and have their own visual tics, like Copernica’s tendency to push up her glasses. The ability to tap the R button and instantly switch your overworld character is a welcome one, too. And that’s not even getting into the sheer amount of unique art — in one area you can enter a secret room and be greeted by a bunch of villager designs you don’t see again.

Also, like the other SteamWorld games, the fact all of the characters are robots is barely even commented on outside of the card abilities and the occasional pun, which only adds to the unique atmosphere.

A Cog in the Machine

Unfortunately, SteamWorld Quest does fall short in one specific area, and that’s the overworld. While it’s easy enough to navigate, pulling from the likes of Odin Sphere and Paper Mario with a world map divided into many different smaller rooms, it can feel very limiting. While there are secrets to uncover by poking every nook and cranny, it often felt inconsistent, and I eventually started running around in circles, rubbing my character against walls, flailing their weapon randomly in the hopes of uncovering something. 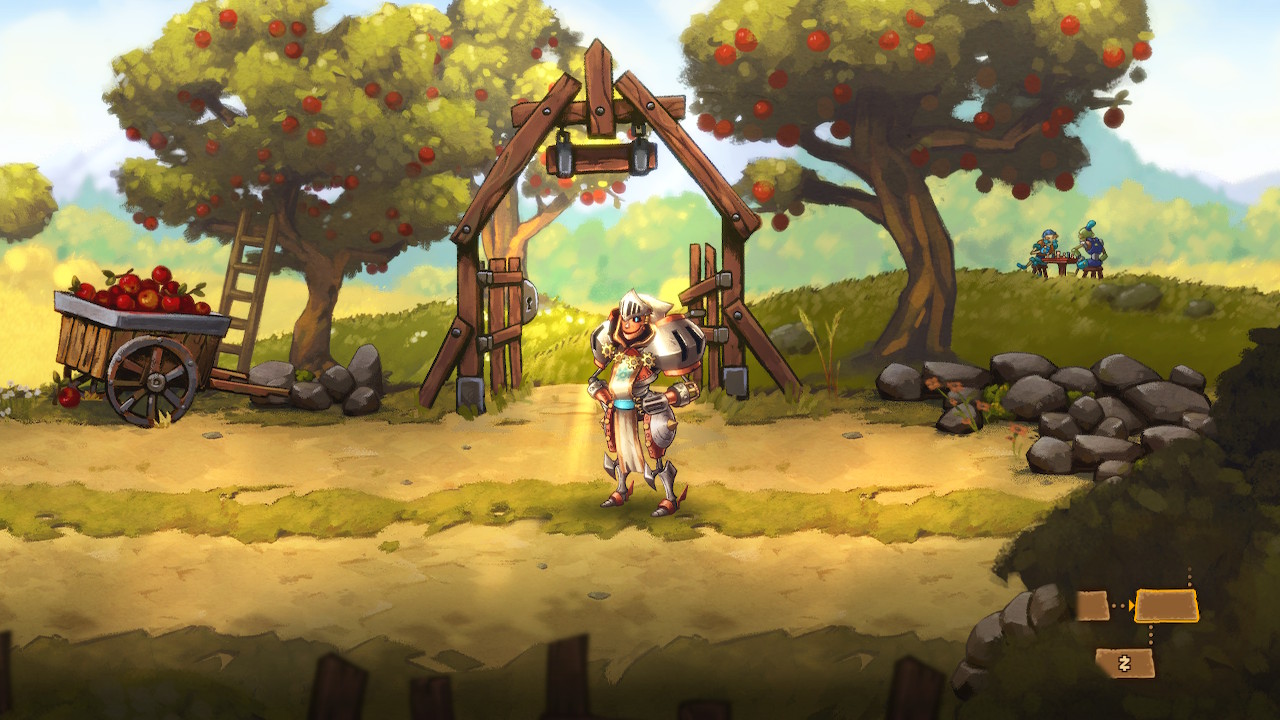 Puzzles are also few and far between, though in some ways that’s a blessing as it only keeps up Quest’s pacing, which is refreshingly quick compared to many other turn based RPGs. Where other games may force you to backtrack through a dungeon after the party finds what it was looking for, SteamWorld Quest will often just warp you right back to where you need to be.

That’s not to say you can’t back track if you want to, though. The game is split up into Acts and Chapters, and each handily shows you if you’ve collected every treasure there is to find. While it’s a little lamentable that there’s no traditional world map, that sort of structure wouldn’t really jive with the narrative urgency, and the act-based story only helps make the journey feel real.

SteamWorld Quest’s combat systems are a triumph, showing just how flexible and satisfying a turn-based RPG can be in the right hands. Combine that with a beautiful world, an endearing cast, and some amazing music? Image & Form’s latest outing is anything but rusty. 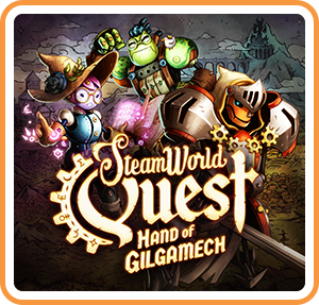