Since Yoshi’s Island dropped on the SNES over two decades ago and became an instant classic, Nintendo’s foremost green dino has had a bit of a topsy-turvy career, with no successors quite living up to that initial game’s glory. Some suffered from age (Yoshi’s Story), others from gimmicks (Touch & Go), and others were just flat out dead on arrival (Yoshi’s New Island). But 2015 finally brought a worthy heir, as the magnificent Yoshi’s Woolly World proved to be one of the best 2D platformers on a console that dealt almost exclusively in that genre — full of color, vivacity, and imagination, imbuing a rocky series with the same artfulness that gave its original iteration such life in the first place.

It’s only logical, then, that developer Good-Feel (who also developed the excellent Kirby’s Epic Yarn) would be tasked with a sequel. While Woolly World was in some respects the original Yoshi’s Island with some new threads, Yoshi’s Crafted World attempts to strike out on its own a bit more, featuring a tweaked aesthetic, depth of field, and reversed levels. The results? Good, if a bit scrambled, with some very high highs and a few middling returns.

The plot is requisite and unremarkable — some new wish-granting implement gets broken apart due to Baby Bowser’s meddling and the Yoshis have to reform it to get back to their island. While certain Yoshi stories have had a genuine emotive element or two in the past, this one — much like its immediate predecessor — is content to coast along without much pathos. It’s not the greatest disappointment, but it might’ve done some good to freshen up the concept just a smidge more somehow. 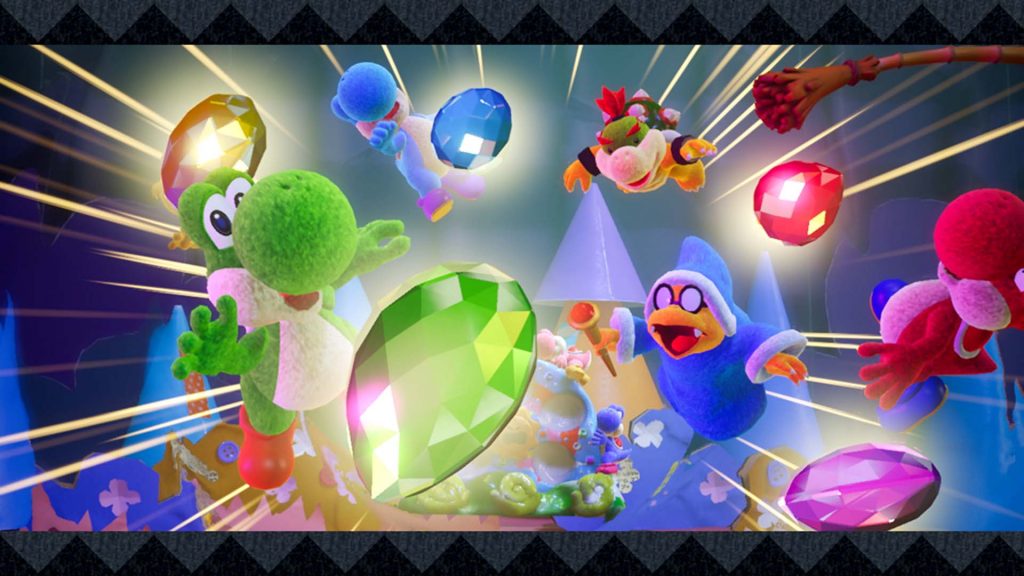 As one would expect by just looking at the game, its strength lies in its visual design. Crafted World one-ups its senior by eschewing wool-only design in favor of a wonderland of low-fi arts and crafts, appearing like loving and sincere odes to childhood creations and whimsy. Cardboard cut-outs, aluminum foil armor, and a host of appropriated household objects like plastic bottle spaceships and tin can platforms. All of it is exquisitely rendered and breathlessly stitched together, with nary a moment of dull realism or flat colors. The resolution can be a bit fuzzy at times, and Yoshi’s design isn’t quite as blobbishly adorable as it was in Woolly World, but the environments are simply some of the most wonderful I’ve seen in a video game, striking a perfect chord between LittleBigPlanet’s homemade feel and the Mario-verse’s sense of strangeness.

It is unfortunate that with visuals so heartwarming, the soundtrack is… lacking. It’s not quite kazoo-nightmare levels of atrocious, but the limited 20-track selection has its stinkers. While the low-art, childlike, homemade appeal works great for the art style, the assortment of doots and deetles on train whistles grates the ears a bit. Given that Epic Yarn’s soundtrack was excellent and Woolly World’s was more than passable, it feels like a swing and a miss when it should’ve been a home run. 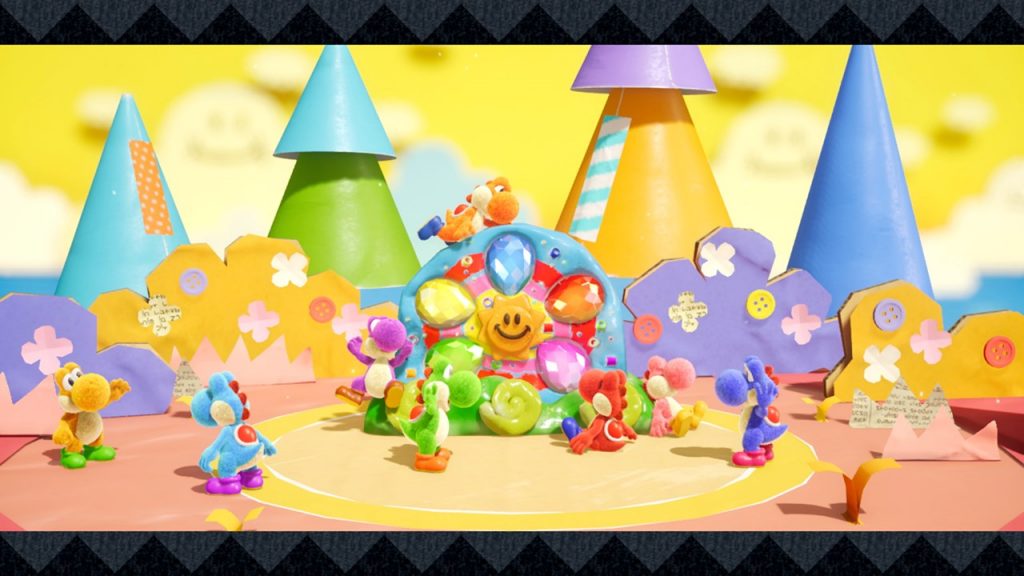 Of course, no amount of prettiness can make up for solid mechanics (unless you’re GRIS), and Yoshi’s Crafted World delivers the goods by and large. The core of any Yoshi game — the red coins, the flowers, keeping your health up — are still intact, though now all of those categories simply earn you more flowers, which are essentially a currency used to progress. Yoshi still swallows, flutters, and tosses eggs, but a couple of tweaks make the experience feel fresher — you now automatically swallow enemies, your aiming reticle is much easier to control, and you can now throw eggs into the background/foreground — which coincides with moments where you can move forward or backward into the z-axis. Not quite “3D”, but certainly an added dimension over Yoshi games of the past.

And the level designs are truly fantastic. Each individual stage has a unique theme and often its own mechanics that are never fully recycled elsewhere, making each one stand out and make a statement. Some manage to have completely different playstyles, from controlling a mecha-Yoshi compiled from plastic kitchen implements to clumsily navigating a toy airplane. But they all feel inspired and non-repetitive, rarely even feeling derivative within the same world. 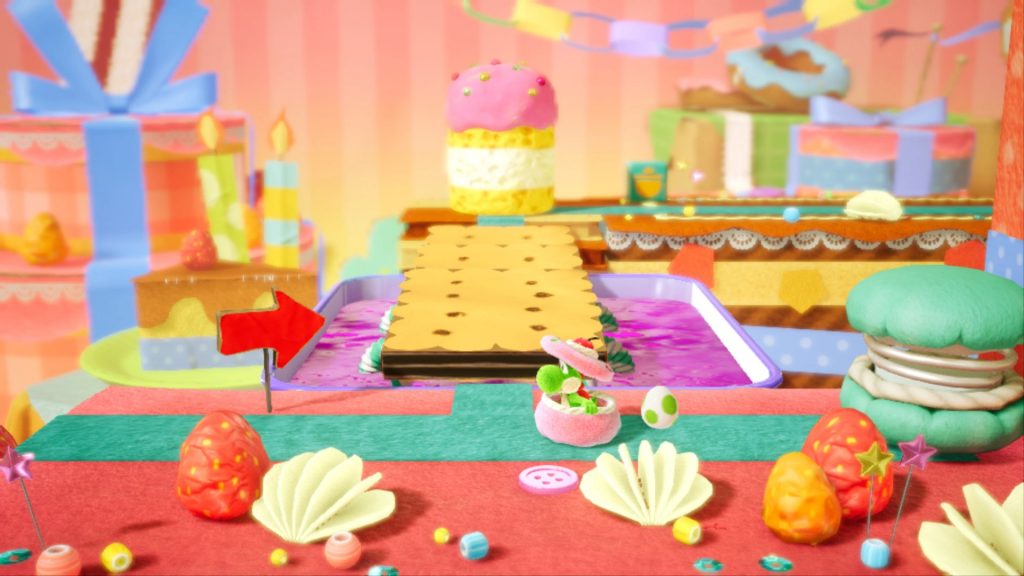 Both compounding and complicating this are two different additions — Flipsides and Souvenir Hunts. Flipsides have you play the level in reverse, abandoning Yoshi’s usual chill-paced searching for a speedrun-infused hunt for Poochy pups. While some levels are simply not as strong backwards as they are forwards, the sheer charm in seeing the cardboard constructs from behind as the props they are — combined with the simple element of haste — is enough to make them feel welcome, and it rarely if ever feels like no level works backwards.

Souvenir hunts I feel more uneven about. After beating levels within a world, you’ll be tasked with finding particular items within each one — maybe a milk jug, maybe several cows — and hitting them with your egg(s). Conceptually, just dandy — but you can only take on one souvenir hunt at a time when there are always multiple per level, and you’re not allowed to pick the order you tackle them in. If you could do several at once (especially since you only really do two or three per level/Flipside) it would be a non-issue, but as it is it just feels like some overt and unnecessary padding.

Which gets into another matter — the game feels a tad short. Woolly World had 55 levels total, and this one has around 40 — not counting boss levels, which are their own secluded fights — but the pacing of the levels feels uneven, in part due to a fairly open-ended world map. It’s not a great deal when so many of the levels are so good — especially considering the Flipsides — but on the whole I was surprised at how little time it took me to beat everything. 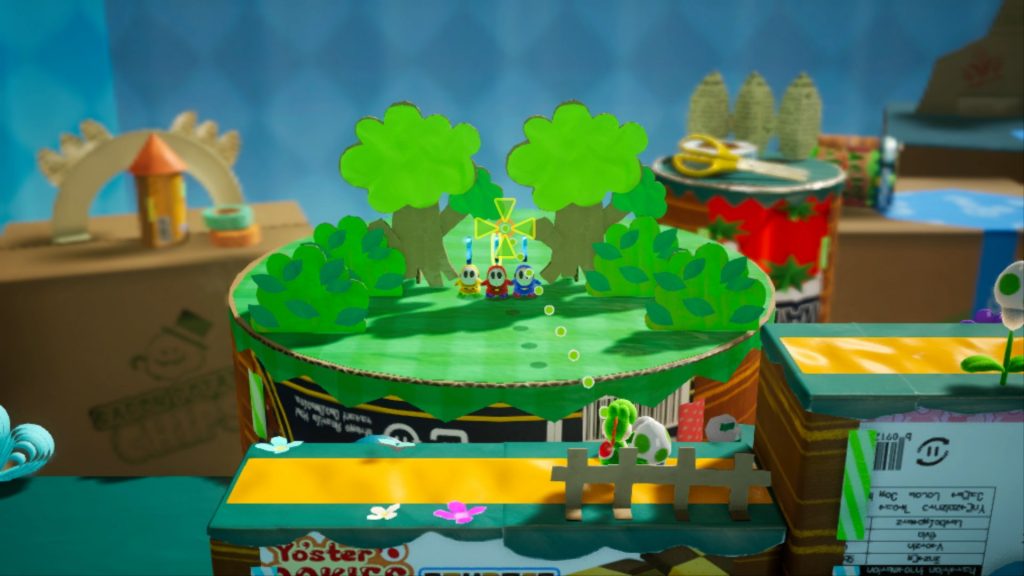 But while beating the game is one thing, completing it is another. Getting through the bonus world won’t be too taxing provided you can stay decently on top of your collectibles, but getting every last flower is simply tedious. The souvenir hunts take too much time, and unlike Woolly World which provided ways to help you hunt items down, Crafted World requires you to scrounge and scavenge. Again, not a big deal if you’re not aiming for 100%, but considering how motivated I was to do it in the previous game, it feels more than a little dampening to my spirit to not want to do it here.

An aspect I haven’t found a place to touch on yet is costumes — a variety of low-brow constructs that Yoshi wears as both armor and aesthetic flavoring. At first I was wary of armor as a gameplay idea, as it does make a lot of levels much easier, but it’s alleviated by costumes being completely optional and also having different levels of defense, meaning you can curtail the challenge to your liking. Less appealing are a number of pallet swaps that feel like the one lazy part of a carefully curtailed game and an unnecessary gacha element to require them — I much would’ve preferred finding something along the lines of the Wonder Wool from the last game, as those made me feel both more specialized and accomplished. 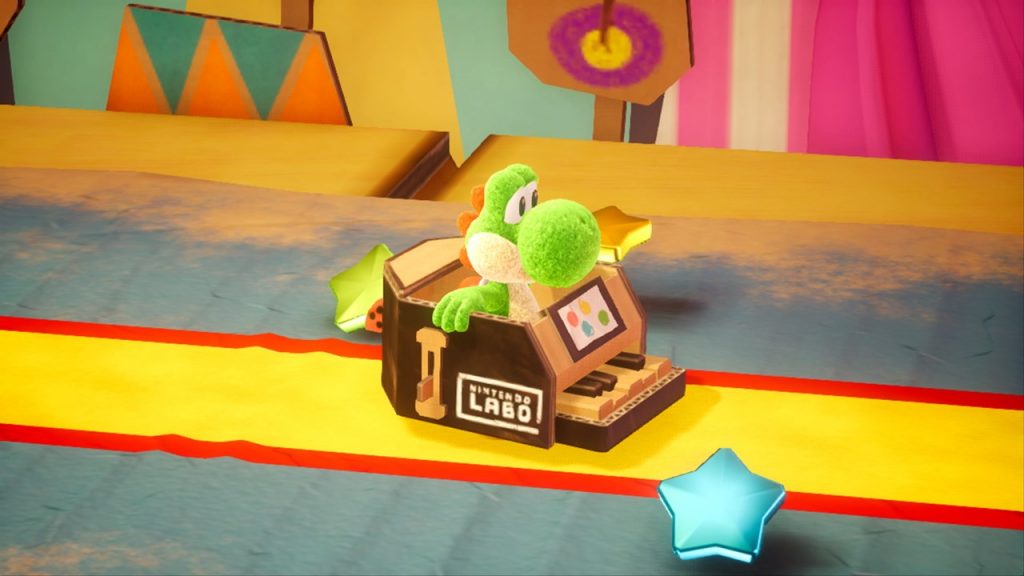 The minor nitpicks don’t add up to anything that can topple the core art, charm, and level design; which levy the game’s kinks and make it a solid addition to any Switch owner’s lineup. Yoshi’s Crafted World isn’t quite as solid as its predecessor, admittedly — its attempts at new deviations from the Yoshi’s Island style, while small, are a bit clumsy in execution. The game’s difficulty feels a bit off at times, replaying levels for collectibles can wear away, and there were a couple moments — however brief — that I wondered if the style was greater than the substance.

But for a followup to a game as great as Woolly World, Yoshi’s Crafted World manages to still perform with heart and vigor. Beneath its somewhat-slipshod execution lies a soul brimming with zeal and purity that makes up for the slights and still delivers a wholesome and endearing adventure. Good-Feel knows their… well, feel by this point, and it’s encouraging to see them try and branch out with a series where doing so usually ends poorly. And I’m sure that they’ll take another go with the green dino in the future where they refine and improve upon the lessons learned here. But for the moment, Crafted World is a game worth playing around in. 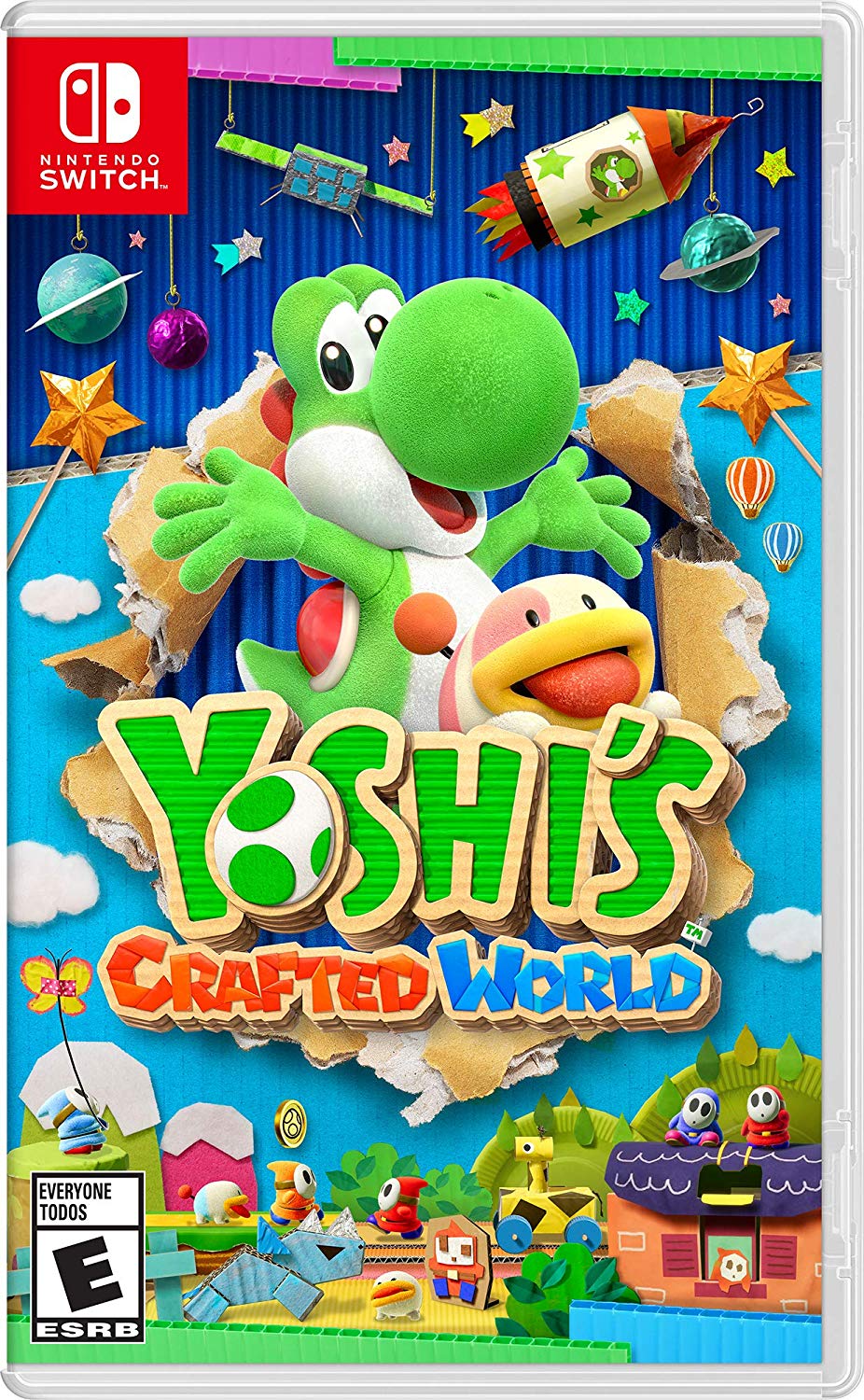