At last year’s E3, EA surprised everyone by simultaneously revealing and releasing Unravel Two, a followup to 2016’s universally adored Unravel. Despite the delight of the surprise, one thing was missing — a Nintendo Switch release for the game. Later, the developer gave an explanation, stating that a Switch release would have taken the development team another half a year to complete. At that time, there was no official announcement, but surely enough, we were treated to the reveal of Unravel Two for Nintendo’s hybrid some time after. And now, just over a month later, it’s in our hands.

Two Yarnies are better than one

It would have been easy for Coldwood Interactive to phone it in for a sequel to Unravel — it was adored by just about everyone, why not just do it all again? Adding co-op could have been something simple. Everyone already loved Yarny, so what if there were two? Just add a second player who can do all the same things as the first and call it a day. To truly wow their audience though, something innovative had to be done. By linking both Yarnies together, Coldwood not only added a way for families and friends to figure out puzzles alongside one another, but also added a depth to those puzzles in a way that’s only possible with this unique gameplay mechanic. 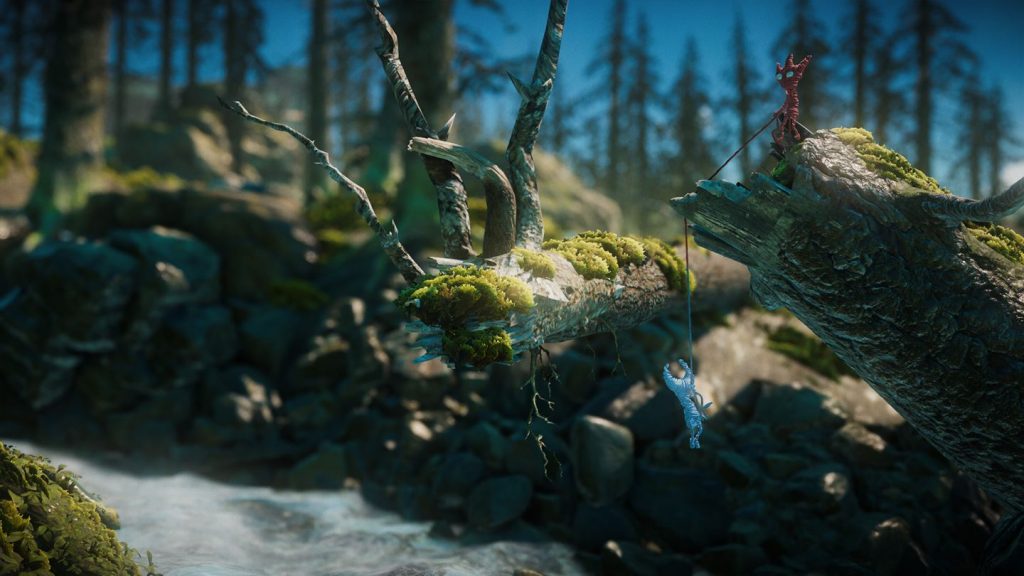 If anything, the gorgeous environments and adorable Yarny were the stars of Unravel for sure, and by adding the simple mechanic to the game’s core mechanics, Unravel Two becomes a deceptively advanced puzzle-platformer, if you want it to be. Most puzzles you come across are easily solved with one Yarny, but become much more fun — and much funnier — when you’ve got two people in on the action. Each player can press the ZL-button to hold their thread in place; one is the anchor, while the other is able to rappel down a wall or swing to a ledge that would be out of reach otherwise. If both players aren’t quite in sync, this can lead to hilarious results — as one Yarny falls to the ground or slams into a wall mid-swing, or is yanked out of a leap by the other player pressing ZL. This also allows one player to solve a puzzle or complete some tough platforming and simply pull the other up the other side if it gets a little too complicated for the pair. It’s a great option for young kids who want to experience Unravel Two with their parents.

It’s possible to play the entirety of Unravel two in single-player as well, as you can swap between Yarnies for puzzles. When it comes to traversing through each of the seven levels, it’s far easier to “pick up” the second yarny by wrapping the separately-colored yarn around yourself to create an adorable, multicolored adventurer. This way, you can act as one Yarny until a puzzle requires you to separate and solve it. You’d think controlling two Yarnies would be cumbersome, but more often than not it feels great to figure out how to use each Yarny as a mobile anchor-point for the other and position them both to cross large gaps to solve puzzles. 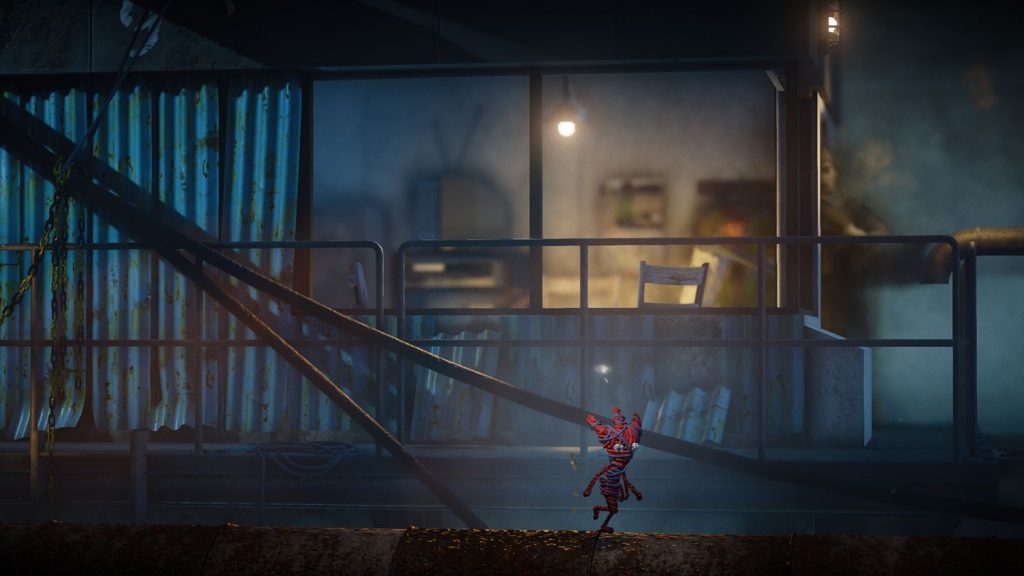 Unravel Two also introduces 20 challenge levels, ranging from single, simple puzzles to intense platforming. Most of the challenge levels can be completed alone, but others are far easier to complete with two players. Beating these challenges by freeing more Yarnies at the end of each will unlock customization options for the playable Yarnies, allowing you to change the color and the shape of their heads and bodies, and the shapes of their eyes. I had a particularly good time matching the color of each Yarny to the Joy-Con I was playing with. There are several colors to mix and match, leading to some very aesthetically pleasing combinations.

Visually, Unravel Two on Switch leaves just a little to be desired in handheld mode. Rather than the soft and inviting visuals present on other consoles, the characters and objects look almost harsh and sharp against the environments in the background when a closeup visual was in play. The larger animals present in the background looked especially glossy, lifeless, and out of place, particularly the chicken from Chapter Three. Once zoomed out and running through a level, however, it’s not really noticeable.

When docked, the game presents two options, one focusing on visuals, making everything a little bit clearer, but locking the fps to 30. I believe that this option is exactly what is used in handheld mode as well, since the same issues are present. The other option focuses on frame rate, locking in 60fps, but everything looks a little fuzzier and less detailed. 60fps is always great, but not necessary for a platformer like Unravel Two. With all this in mind, I found the game perfectly enjoyable in either mode. 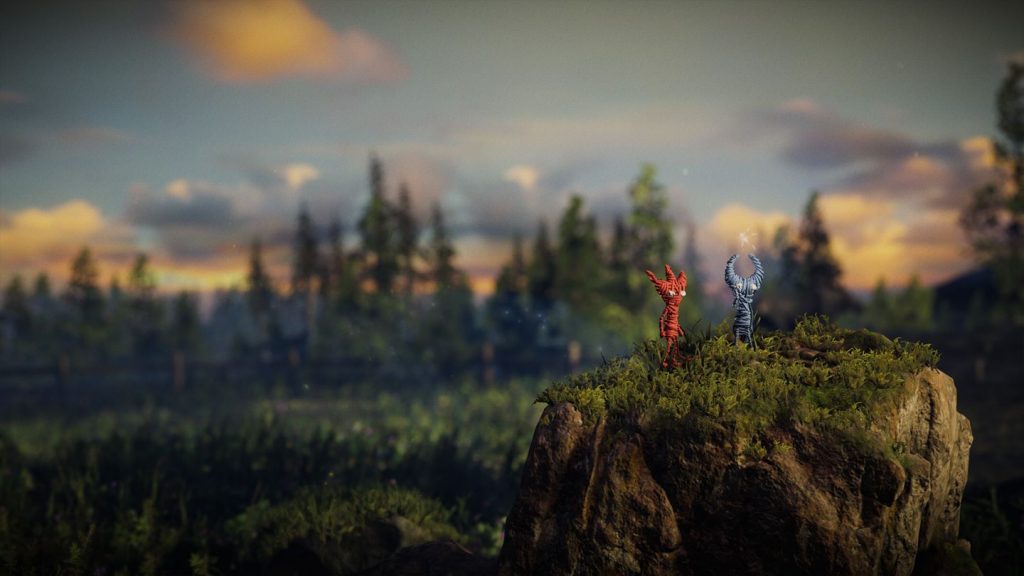 I initially found Unravel Two’s music to be repetitive and annoying, but the longer I went on playing, the more it grew on me. It’s soft and inviting, and each piece of music matches the action, or lack thereof, on the screen pretty well. I didn’t feel the same way about some of the sound effects in Unravel Two though. Maybe it’s just me, but certain objects make very jarring noises that overstay their welcome and they come off as sounding a tad too loud when interacted with. To get a little more specific, the previously mentioned Chapter Three chicken makes some very distinctly un-chicken-like noises, and by the end of the level I was more than ready to be done with it.

Pick up and play the day away

I know those last few paragraphs had a lot of gripes, but I want to make my point very clear right now: Unravel Two is an absolute delight to have on the Nintendo Switch. The depth of the two-Yarnies mechanic is astounding and I wouldn’t have believed that it would improve the gameplay as much as it did when I first heard about it. It’s easy enough to play co-op with your family, and those looking for head-scratching puzzles and tricky platforming will feel right at home. Plus, having Unravel Two finally come to the Switch makes it easy to pick up and play, and I like that it’s possible for anyone to pick up a friend along the way.