Frito-Lay and Nintendo team up again in Switch giveaway

The initial year of the Nintendo Switch was filled with various partnerships and contests. One with Frito-Lay was a surprise, and given the demand for the console and the promise of giving one away each hour, the promotion was a success. So much so, you may have even seen the specialty marked variety packs be locked away in display cabinets that should have been holding Nintendo Switch systems.

Initially shown off at Nintendo NY’s Mario Day celebration earlier this month, Frito-Lay and Nintendo are teaming up again. The contest is somewhat the same — from March 25th to May 19th, a Nintendo Switch and three games will be given away every hour. You won’t be able to pick and choose your games, but we have an idea of what the selection might include. The Frito-Lay Variety Packs will be showing off Mario, Luigi, and Yoshi with renders from New Super Mario Bros. U Deluxe, Super Mario Party, Mario Kart 8 Deluxe, Mario Tennis Aces, and Yoshi’s Crafted World. A Nintendo Switch and three Super Mario Bros. franchise-centric games for “free” sounds like a good deal to me! 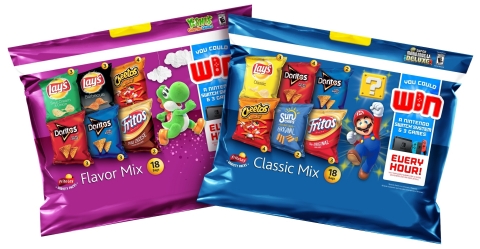 While we wait for the contest’s launch next week, you can head on over to the contest’s site and make an account. There’s also another contest being hosted there where you can try your hand at winning at $500 eShop card. All you need to do partake in a character quiz.

Will you be scouring your local markets for a Frito-Lay Variety Pack? If so, good luck!

You can view the press release for the Frito-Lay Switch giveaway for more details.