Team Sonic Racing gets vehicle customization, new music, and its own animated series

During today’s SXSW Sonic panel, plenty of focus was given to upcoming kart racer Team Sonic Racing. Those excited for the game itself, riding the wave of new music, or just wanting to see these characters again all have something to be excited for. First was the debut of TSR’s customization features, which will allow you to change both the performance and appearance of your cars with unlockable parts.

It looks to be an extension of the mods system from Sonic & All Stars Racing Transformed, though with multiple means of adjusting your vehicle when it comes to how it drives. More importantly than that though, you can select from a wide list of horns, paint jobs, tires, and more to get your ride looking just how you like. These will be unlocked by spending in game currency, though it sounds like parts (including rare, legendary parts) will be gained randomly.

After this a new music track (or rather a new arrangement) was debuted by Jun Senoue himself. Coming from Sonic Heroes, Bingo Highway is getting some love with one of the best new tracks to come along in the lead up. Have a listen and hear not just the expected guitar but an outright cascade of chips, blips, and blups courtesy of Japanese musician Toriena:

To close out the TSR reveals, it was announced that the game will have a tie in animated series from the same team behind Sonic Mania Adventures called Team Sonic Racing Overdrive. It features a style all its own while still going for story telling through action and situations rather than dialogue. Of course this being a more modern cast, it features a contemporary cast and graces the world with the likes of Chao and Big the Cat. Have a look at its first (of two) parts from the surprise debut:

All that Froggy merch? The Chao being just the right amount of off putting? Knuckles being Knuckles? Perfection. The second episode will be due in April ahead of the game’s full release, though those Froggy t-shirts and the hat that made for perfect Big bait are available now. You know what to do. 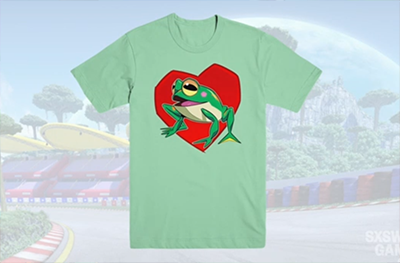 Look forward to Team Sonic Racing, due for release on Switch and other platforms on May 21st.