Review: ToeJam & Earl: Back in the Groove!

Back in the early ‘90s ToeJam & Earl made waves on the Sega Genesis. Releasing a dungeon-crawling roguelike on console was practically unheard of at the time, let alone one oozing with such style, charm, and raw attitude. There was even a point in time where ToeJam & Earl were almost picked over Sonic to be Sega’s official mascots!

For all you poindexters who’ve never felt the funk, Back in the Groove is essentially a reimagining of the original ToeJam & Earl for the modern era. Though is it the funky fresh sequel longtime fans have been clamoring for, or does it crumble under the weight of its two lukewarm sequels and sky high expectations? 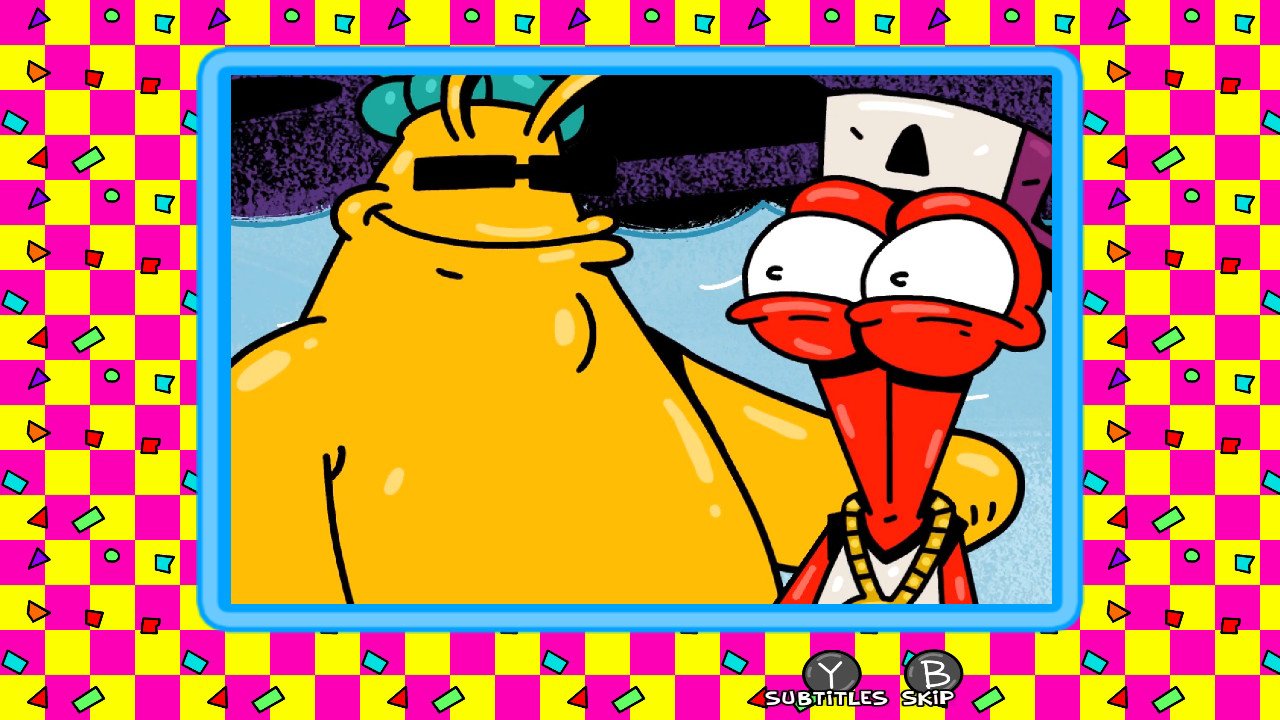 WON’T YOU TAKE ME DOWN TO FUNKYTOWN

Our story begins with our rambunctious rapmasters ToeJam and Earl chillin’ in their totally-borrowed-and-not-at-all-stolen spaceship. In a poor attempt to woo their lady friends with rhythm and rhyme, Earl confuses the ship’s auxiliary mega subwoofer for a black hole generator and crashes their craft on Earth. (Our boy might be a little dyslexic. Just a little.)

While later sequels moved away from ToeJam & Earl’s roguelike roots, Back in the Groove takes great inspiration from the original ’90s hip-hop infused adventure. Just like in the days of blast processing players explore randomly generated islands suspended in space while searching for lost ship parts. Collecting all ten pieces ends the game, forever solidifying your status as Funkotron’s most bodacious Funklord. 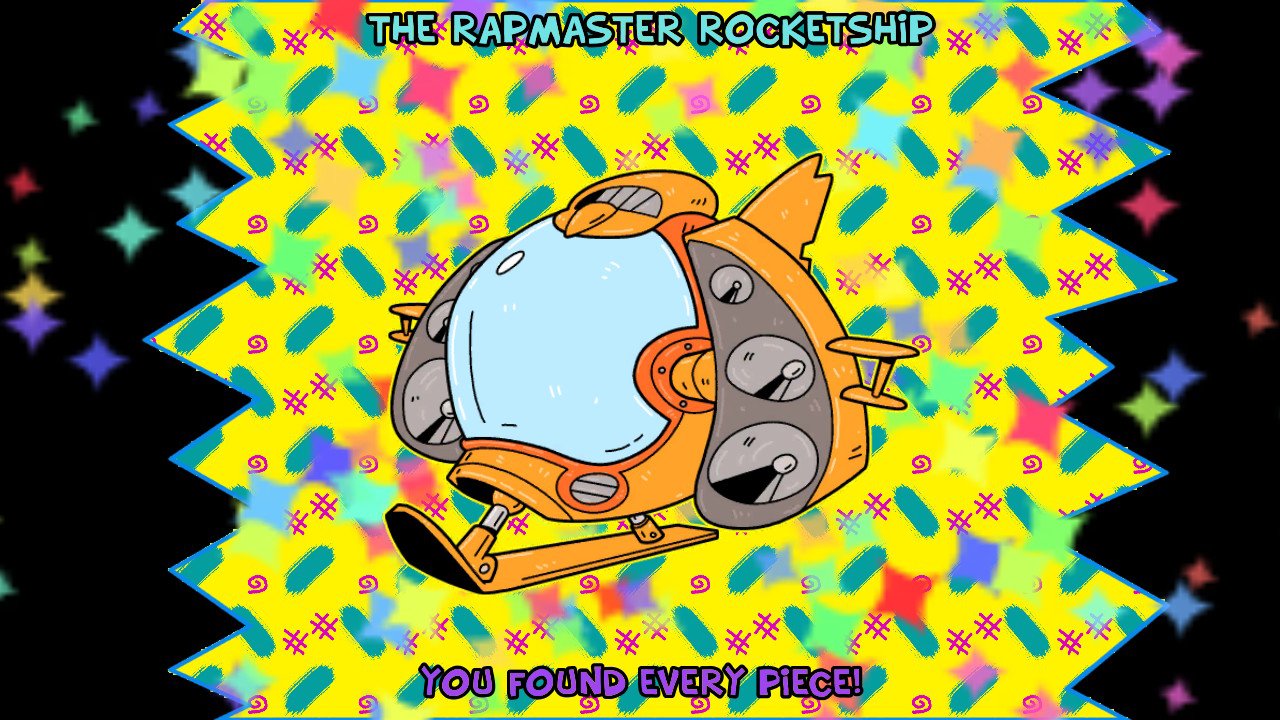 Of course that’s easier said than done, as each stage is crawling with mobs of earthly creatures eager to dissect you. Their designs are all delightfully absurd, too, from ghostly cows and manic moms to obnoxious tourists whose camera flash can both confuse and harm you. While most simply deal damage upon contact, others attack in much more creative ways, like Cupid’s arrow reversing controls or an environmental activist smooth talking their way into a forced donation. My personal favorite — a literal internet troll who tosses censored insults from afar, but runs for the hills with fear the moment you get too close.

Thankfully, not all Earthlings are out for an autopsy. Many are actually quite friendly, offering all kinds of goods and services should you toss a few fat stacks their way. Healing wizards, deafeningly deadly opera singers, and a fellowship of cosplaying kiddos with serious gambling problems scratch the surface of zany characters encountered. Hell, even jolly ‘ol Saint Nick makes an appearance, spreading holiday cheer via presents tossed high from his fancy new jetpack. Hey, who needs Rudolph when you’ve got science on your side! 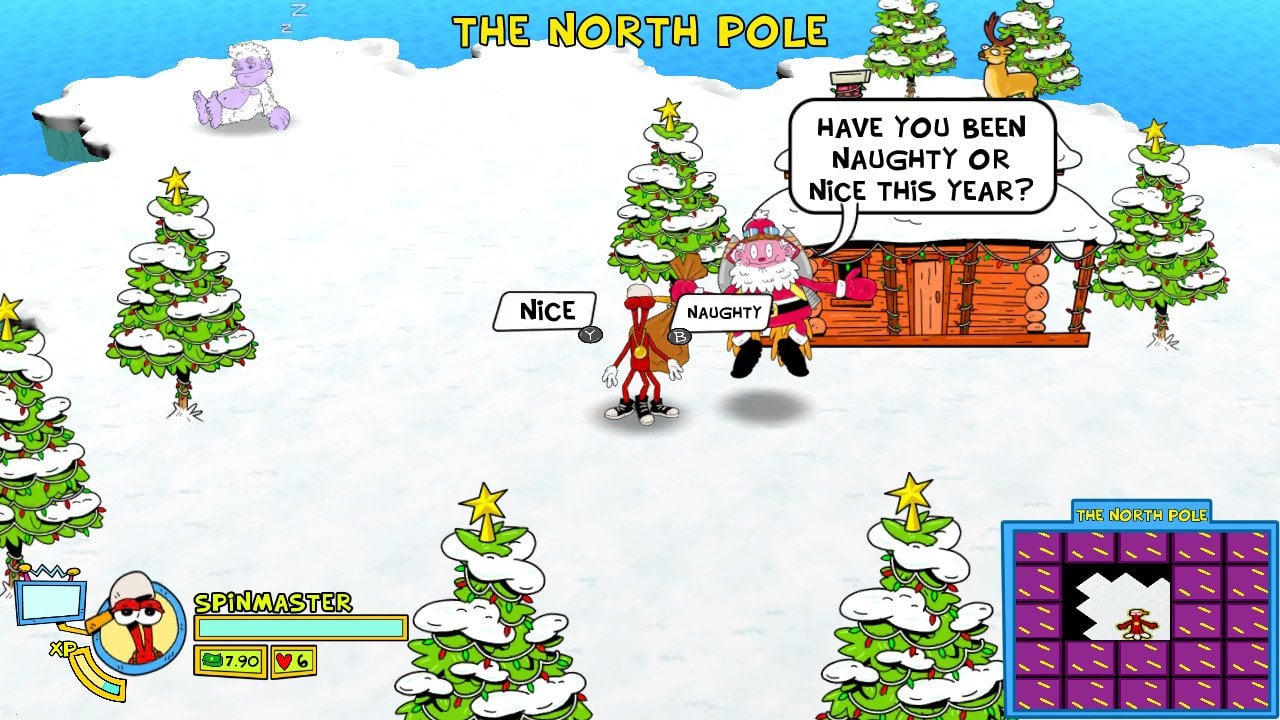 Speaking of gift giving, presents serve as the game’s many source of power-ups for keeping those nosey Earthlings at bay. Since our humble heroes favor avoidance over violence you’ll mostly find helpful tools for blazing through stages more efficiently — like decoys for distracting enemies, telephones for revealing more of the map, or protective bubbles that absorb damage.

Though just like getting socks for Christmas, not all presents are pleasant. Their contents are rarely known until first opened, with some having more sinister effects designed to harm rather than help. Being mercilessly chased by thunderstorms, spontaneously lit on fire, or jettisoned via rocket powered shoes into the empty void of space provides a fun balance between risk and reward that’s sure to keep players on their toes.

The most coveted collectible in the game, however, favors fashion just as much as function. Optional hats provide various bonus perks when worn — from random health regens, boosts in speed, and status effect immunities to discounts on present purchases. Hats worn are chosen at random at the start of each stage, making it rare that you simply cheese your way through the game using more powerful attire. With nearly two dozen to don earning the full wardrobe takes time — especially given only one is unlocked per successful run — proving a fantastic motivator for anyone concerned about replay value. 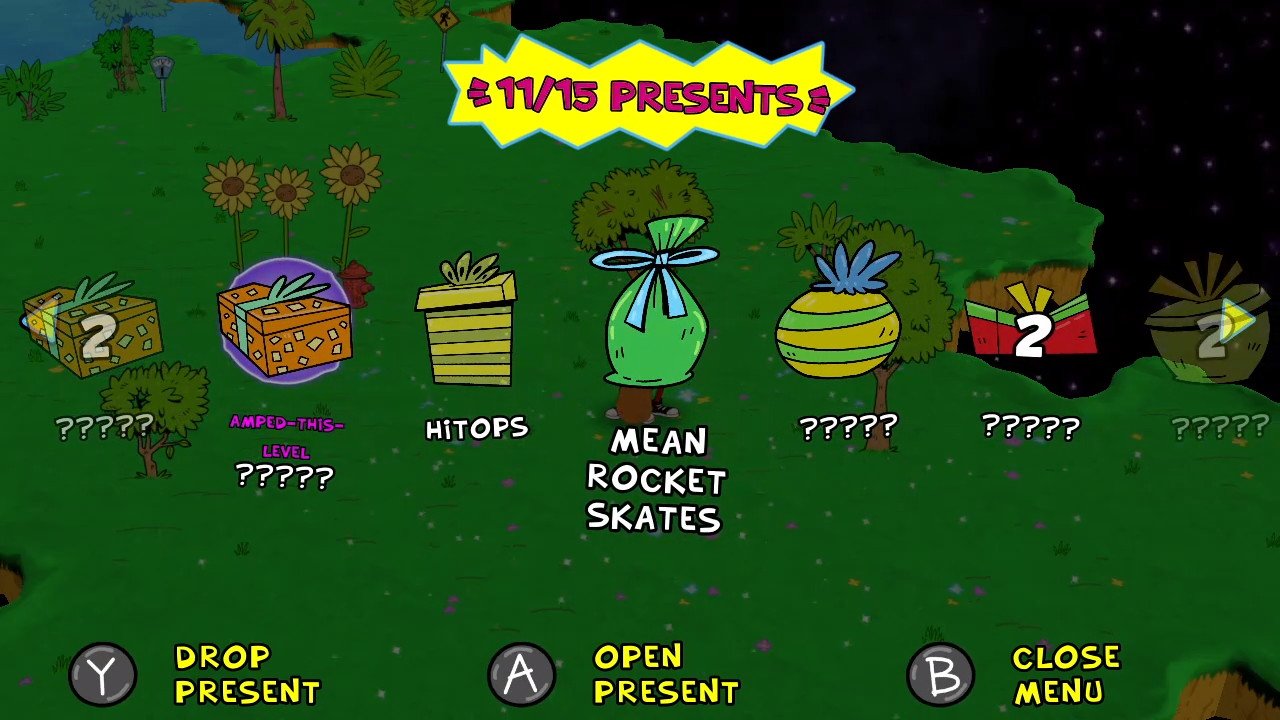 GET DOWN ON IT

As far as difficulty goes Back in the Groove is far more forgiving than most roguelikes thanks to intuitive gameplay mechanics not often represented in the genre. Extra lives remove the sting of of permadeath, allowing for more breathing room when opening unidentified or broken presents. Combine that with the fact falling off the stage doesn’t kill you, but instead sets you back to the previous floor and you have a much more accessible journey even newbies can enjoy.

Outside ToeJam, Earl, and their retro counterparts, there’s a whole cast of fly funkmeisters to play as. Feisty ladies Latisha and Lewanda are available right from the start, followed by a trio of fan favorites unlocked upon successful playthroughs. Each character comes packing their own starting presents, stats, and special abilities — my personal favorite being Earl and his lax attitude for suggested food expiration dates.

While perhaps important in the early game, which character you vibe with most has little consequence thanks to Back in the Groove’s generous (and hilariously titled) ranking system. Pretty much every action taken in the game awards experience points, from opening presents and shaking trees to dishing out dance moves. Earn enough and you’ll climb the ranks from meager Wiener all the way to almighty Funklord — each title adding random increases to attributes like speed, present inventory, health, and more. Basically with enough effort, any character can become a powerhouse not to be trifled with. 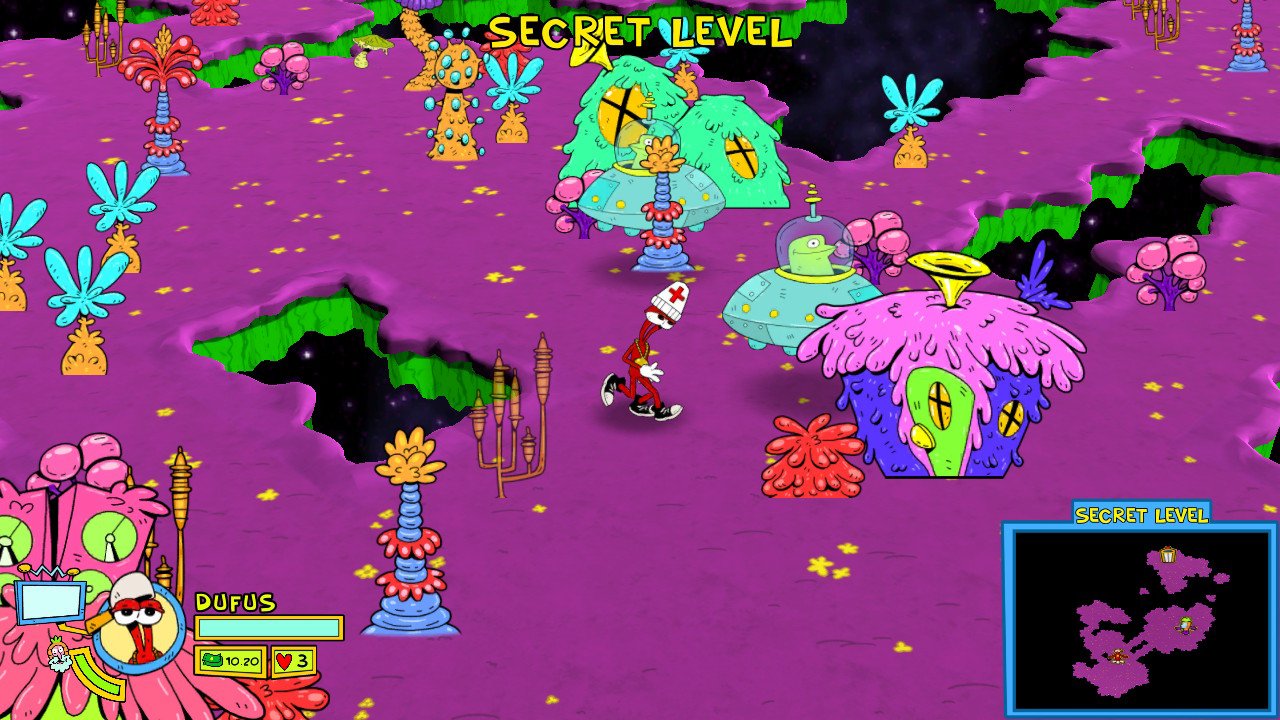 A couple neat minigames provide a decent distraction from the main adventure, though I wish they had been a little more fleshed out. Hyperfunk Zone, a squiggly alternate dimension paying homage to 1993’s Panic on Funkotron, makes its return. It plays a lot like your typical autorunner — speeding through stages, avoiding obstacles, and collecting things like money and presents for use in the campaign. Sadly the camera has trouble keeping up with the verticality, making it frustratingly difficult to avoid certain hazards at high speeds.

Slightly more enjoyable is ToeJam & Earl’s take on rhythm games. Scattered throughout most stages are holograms of various Planet Funkotron citizens struck with dance fever. These play out as rhythm games tasking players with matching scrolling buttons to the beat, similar to Guitar Hero and Rock Band. Choreograph moves perfectly and you’ll find yourself swimming in both paper and presents. Regrettably, they’re rather shallow and only take a moment to muddle through, making me wish its implementation could be more integral to the game’s core gameplay mechanics — especially given how ingrained ToeJam & Earl’s soundtrack is to the series’ identity. 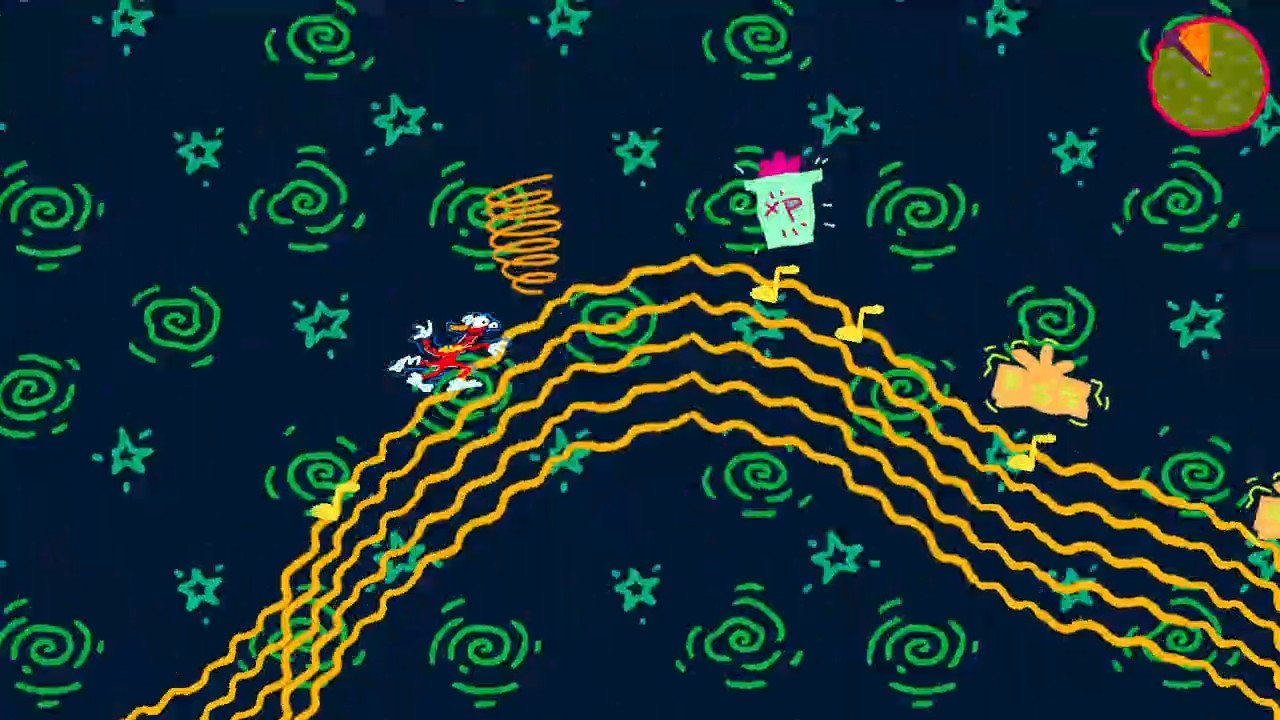 DON’T STOP ‘TIL YOU GET ENOUGH

Funky doesn’t even begin to describe the music bursting from my Switch speakers. Each track lays the funk on thick, pounding its bass-filled beats in your brain for months to come. (Trust me, you’ll want to wear headphones for this one.) It’s all perfectly accentuated by a colorful art style and wacky ‘90s humor seemingly ripped straight from a Ren & Stimpy cartoon. While I would have appreciated some more variety in environments, it’s a minor gripe considering the level of polish given to the game’s overall presentation.

No review of ToeJam & Earl’s triumphant return would be complete without mentioning its manic multiplayer mode! Back in the Groove supports up to two players locally or four players online for its entire campaign. While I didn’t get the chance to experience the latter yet, I can safely say my time spent offline boogieing with a friend was infinitely more enjoyable than going solo. Drop-in/drop-out multiplayer meant any run could be tackled together seamlessly, with intuitive screen splitting only occurring when both of us weren’t within high five proximity. It’s clearly the ideal way to play, and I can’t wait for the servers to go up later today to partake in the chaos four-player matches will undoubtedly provide. 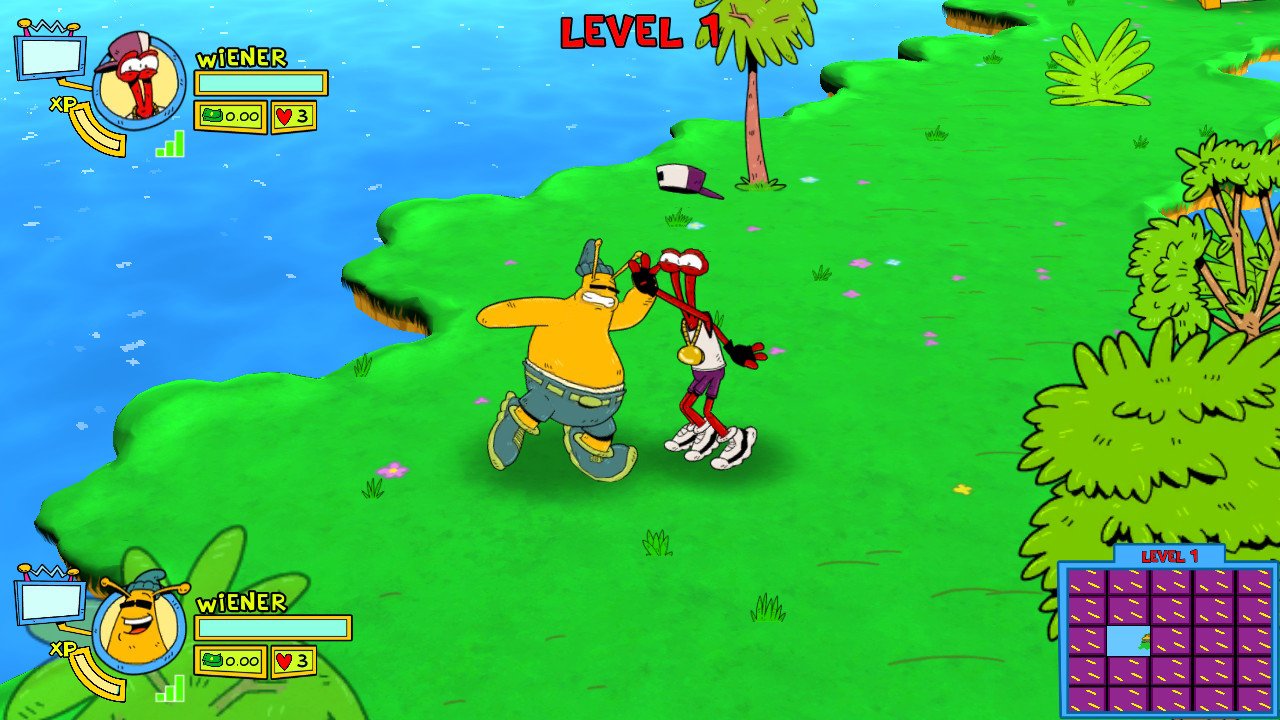 LAY DOWN THE BOOGIE

Back in the Groove is the faithful return to form Funkotron fans have been rapping about for decades, capturing the magic that made the original so endearing the galaxy over. It may not expand on the OG formula much, but old skool spinmasters from the Sega Genesis era are sure to vibe with ToeJam & Earl’s funky fresh return.

Grab your Switch, crank the boombox to 11, and get jammin’! 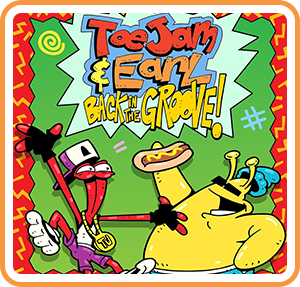