Review: The Liar Princess and the Blind Prince on Switch

Fairy tales have been around for centuries; and while their imagery is easy enough to find, it’s not too often you find a game that presents itself as one. And I don’t mean the watered down, available on home video kind of adaptation either. No, what we have here is a stroll into the macabre with misfortune to spare, presented in a storybook aesthetic so captivating you can almost smell the pages. The gameplay may not always live up to this well told tale — but for anyone enamored with its ink-strokes, or those who are after a more subdued experience, The Liar Princess and the Blind Prince deserves a place in their library.

A friendship forged with secrets and sacrifice

The story begins with just that: a story being told to you in Japanese via a soft-spoken female voice. An unfortunate accident has lead to a wolf with a beautiful singing voice blinding a young prince who loves her song. Seeking atonement due to his kind applause, the wolf ventures to the castle to find he’s been locked away due to his affliction.

Wracked with guilt, she ventures back into the forest, trading her voice to a witch for a chance to cure the prince’s sight. She has to escort him all the way back through the treacherous treescape, fully knowing that her very claws were the cause of his misery. As such, she requests to be made into a human princess, which the witch obliges with the added gift of letting her change between princess and wolf at will. Thus, the Liar Princess is born, freeing the Blind Prince and taking him by the hand forevermore. 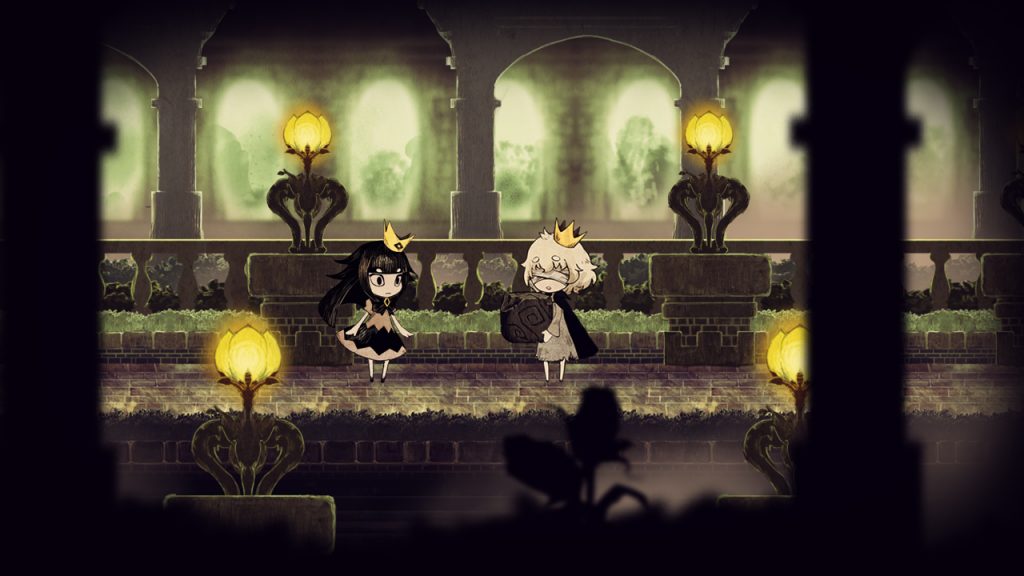 It’s a setup that draws you into the game’s world and the co-plight of its two leads. The fact that it takes a half hour sequence of cutscenes and narration to get through to gameplay might put off some players, but the combination of illustrations, turning page effects, and befitting music was enough to win me over. Liar Princess fully commits to its desired aesthetic and it’s nothing short of excellent. As the story itself unfolds, you’ll see more of the characters’ growing bond from the perspective of the princess/wolf, told in equal parts by cute misunderstanding fueled vignettes and moments of existential turmoil.

Hand and hand, every step of the way

Of course, this is a game, and between these story sections is the gameplay itself. You’re in control of the princess, who — with the press of a button — can become the wolf. Balancing between these two forms is key to getting the prince through the woods’ puzzles and platforms safely. As humans, the both of them are defenseless trespassers in the forest and can easily die to monsters, traps, and above average heights. That said, it’s the only way to guide the prince directly, taking him by the hand and giving him suggestions on how to proceed if you need to keep the princess stationary for a bit or handle fire (which she’s terrified of). 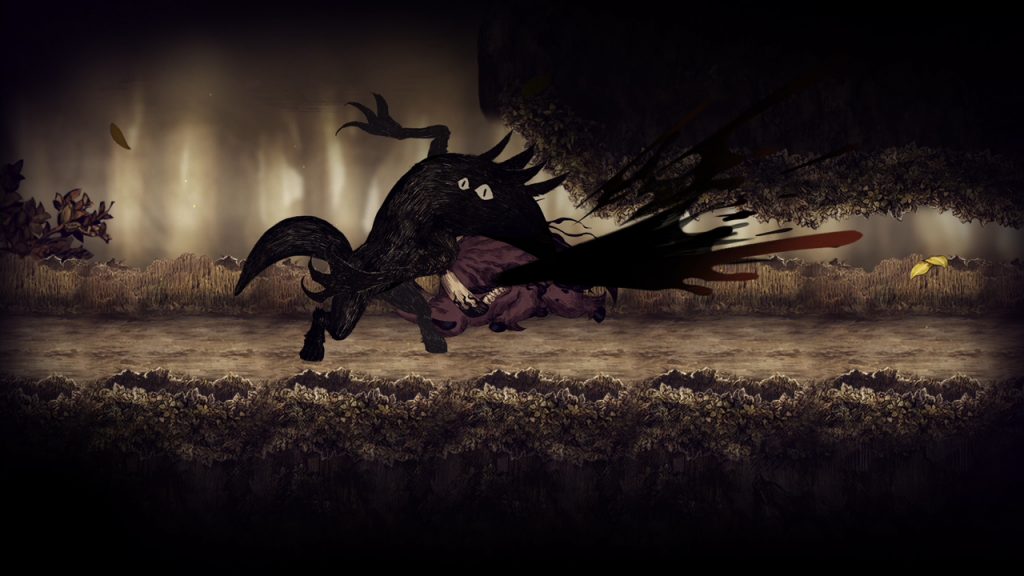 On the other paw, by returning to her lupine form, the wolf is nearly invincible amongst the overgrowth. Monsters that fell a human in one hit can’t even touch you, and with a few claw swipes they perish in your place. She’s also able to leap further and higher, and weighs as much as two people on her own (playing into elements such as bridges and see-saw like platforms). In time you’ll learn the pros and cons of both forms and you’ll be transitioning between the two to best anything standing between you and the witch’s promised aide.

While I enjoyed the interplay between these two forms, it was the way the game slowly introduced more elements to its puzzle-like sections to bring about the switching that really made the game fun to play. This is a slow, thoughtful experience, and every new gimmick and interaction Liar Princess’ chapters bring builds up both the depth of gameplay and mingles with the sense of mystique and difficulty that comes with the forest’s misty depths. Nothing ever felt truly difficult, and any deaths or mistakes that came about were safety-netted by frequent checkpoints. Eventually, you’re even provided with the ability to skip forward if something proves insurmountable.

Beautiful to behold even with the tears

These sections are just as gorgeous as the story illustrations, with the in-game art style and character designs being a true delight. Because of this, I wanted to explore every last corner of the world, looking for anything new to see or simply losing myself in the rich backgrounds. Good thing too, as there are extra details all around, like scattered petals to discover and flowers to pick — all there so you can bring them to the prince if you stray off the beaten path. It’s a game where you can literally and figuratively stop and smell the roses, though that plodding pace can drag things down when it comes to speed. 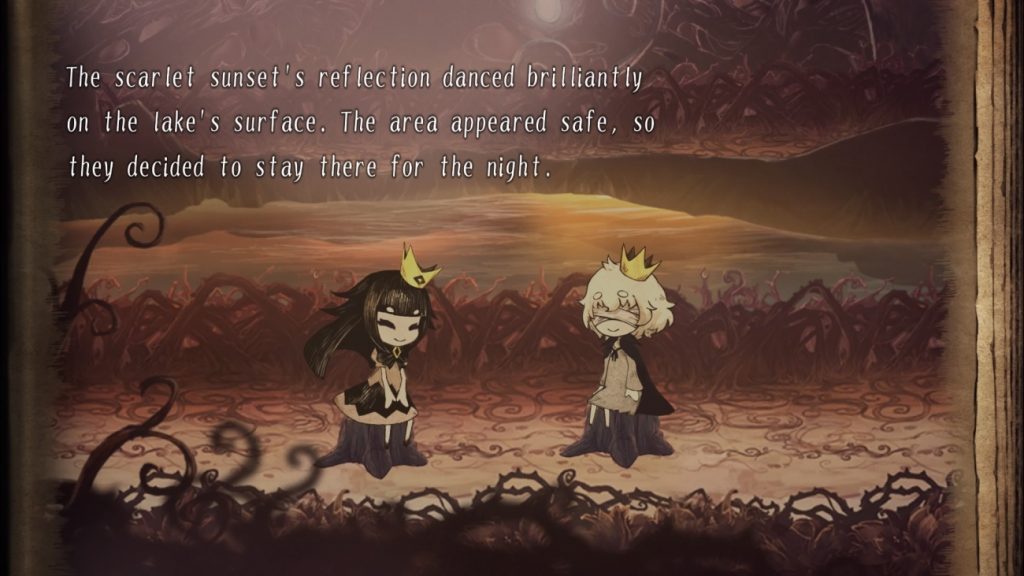 At its core, the entire game is an escort mission. The prince is mostly in your control, as by holding down a button you can have him remain by your side as you move along — though at times, his model got stuck for me, or didn’t quite meet a crucial jump the way the princess did. To the game’s credit, I never felt the kind of expected tedium of an escort, and the prince is just as important to getting through the woods as his dishonest guide. It’s occasionally bothersome to double back and pick him up before moving on, but that’s what it takes to really share a journey together in Liar Princess.

Alongside those points, the game’s biggest shortcoming is that glitches were somewhat common. Some were simple graphical flickers, the kind of thing you can convince yourself was just a blink. Other times, a character would get caught on a ledge or run in place for a while; or one would meet their end to odd hit detection. These happenings weren’t enough to ruin the story, but they do make the pages fray once they start to add up, especially when the game is fairly short. 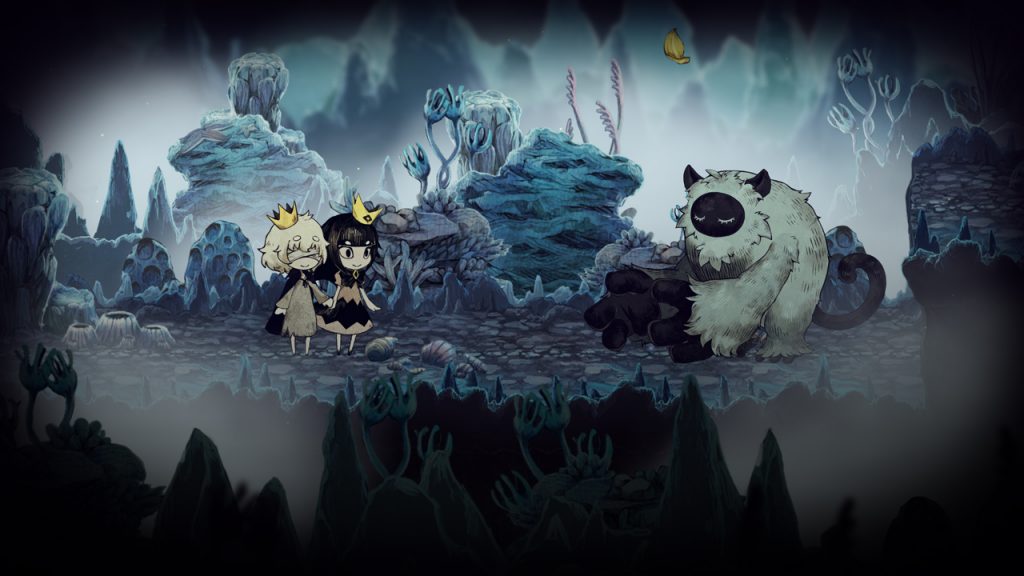 The Liar Princess and the Blind Prince is a game I’m happy to see on Switch. With its gorgeous visual aesthetic and downtempo pace, it’s the kind of game you want to play wrapped up in your blankets with the lights low. This bedtime story doesn’t shy away from darker subjects and star-crossed developments — it wears them proudly, making the game stand out amongst its contemporaries. Even if the gameplay doesn’t exactly meet the high marks of its narrative and style, truth be told it’s still worth getting lost in the sights and sounds of the forest. 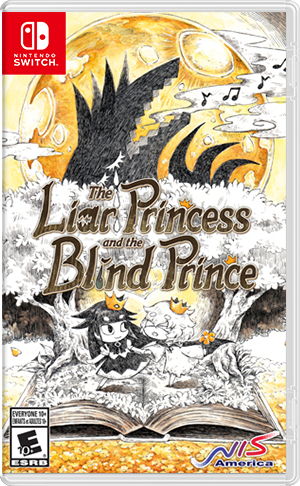