Joker’s announcement for Super Smash Bros. Ultimate and plenty of domain renewal murmurs have Persona on the mind of Nintendo fans, though there’s still plenty of love to go around for its darker and more demonic parent series. Shin Megami Tensei V was announced as a Switch title a while back now, with no real updates since. Thankfully, Atlus’ New Year’s card features the elusive game and a tease of new reveals. 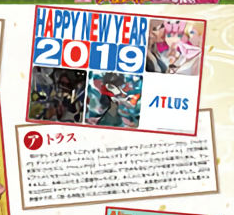 Via Persona Central, the card translates to a promise of unannounced new titles following the upcoming of Catherine: Full Body (currently not confirmed for any Nintendo platforms, but please Atlus) and also states a follow up report on MegaTen V. The card itself has images of these two games along with Persona Q2, already out on 3DS in Japan with no current localization announcement to speak of.

So while it may not bring any solid, new info it’s still good to know we can expect something on Shin Megami Tensei V soon enough. May it be a great year for the company and its fans, with hopefully some more Nintendo love in the mix.