The question of “can video games be art?” is long past us, as it has been fairly, definitively proven that the medium has the power to move, to inspire, and to resonate with players and our culture at large. But our understanding of gaming as an art form is ever evolving, as we must always ask what makes games art? Is it solely found in the design? The storytelling? The mechanics? The aesthetic? Or is it only when these various elements intersect that a work holds power?

GRIS — from Barcelona based Nomada Studio — is a game that could qualify as its own art installation. It does so with simple gameplay, complex abstractions, and what might possibly be the greatest art design ever seen in a video game. It is at once a simple, relatively unchallenging platformer, and also a rich personal journey of color, sound, and sorrow. And for that reason, it is an absolutely necessary pickup.

The story of GRIS (Spanish for “gray”) is anything but concrete, represented in a dreamscape of metaphor and symbolism with absolutely no dialogue to speak of. You play as the titular Gris, a monochromatically dressed young girl who experiences an allegorical journey of the self, traversing through a faded world in an attempt to put pieces of her reality back together. And that’s all that’s laid out for you — whatever the story “means” is left for player interpretation, though it’s far from a jumble of meaningless symbols and set pieces. 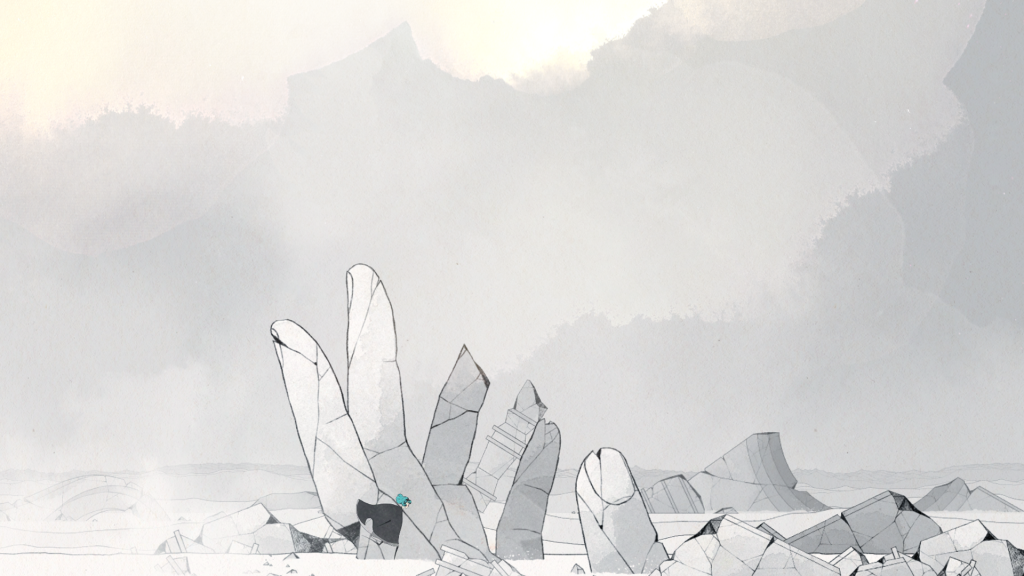 GRIS is a game that is clearly and pointedly about grief, and overcoming the pain you feel in order to move onward. Initially set in a black and white world devoid of much detail, Gris progressively restores color to her reality, forming new pathways and growing to understand more of herself and what surrounds her. As she travels, she has run-ins with a shadowy, amorphous being that seems set on swallowing her whole, reflecting the very gloom she attempts so desperately to escape from. The narrative is rich with meaning, but is neither unsubtle enough to feel ham handed nor discreet to the point where it feels like pretentious nonsense.

And were it portrayed as simply as its described, then perhaps the game would be nothing special. But this game’s visuals are… indescribable. The mark of true art is the fact that words can do it no justice, and GRIS is easily one of the most gorgeous — if not the most gorgeous — games I’ve ever seen.

Where do I start? The game’s animation is so fluid and evocative that it instills a sense of vivacity into the smallest of motions. All of Gris’s actions feel organic, as if the sudden transformations in her body shape and size are natural to her — to speak nothing of the shadowy being, which is so nebulous in form that to watch it twist and turn about is mesmerizing. The game utilizes simple symmetrical geometry to perfection, as it utilizes clean curves and circles alongside perfect blocks and lines to create a structures of aesthetic spotlessness. And the use of color theory is unmatched, as watercolor splashes are mixed with bold, deep, and vivacious hues to create rich landscapes that emblazon themselves upon your mind with each step, jump, and glide. To see screenshots is one thing; to experience it in motion is quite another. It is art in every sense of the word. 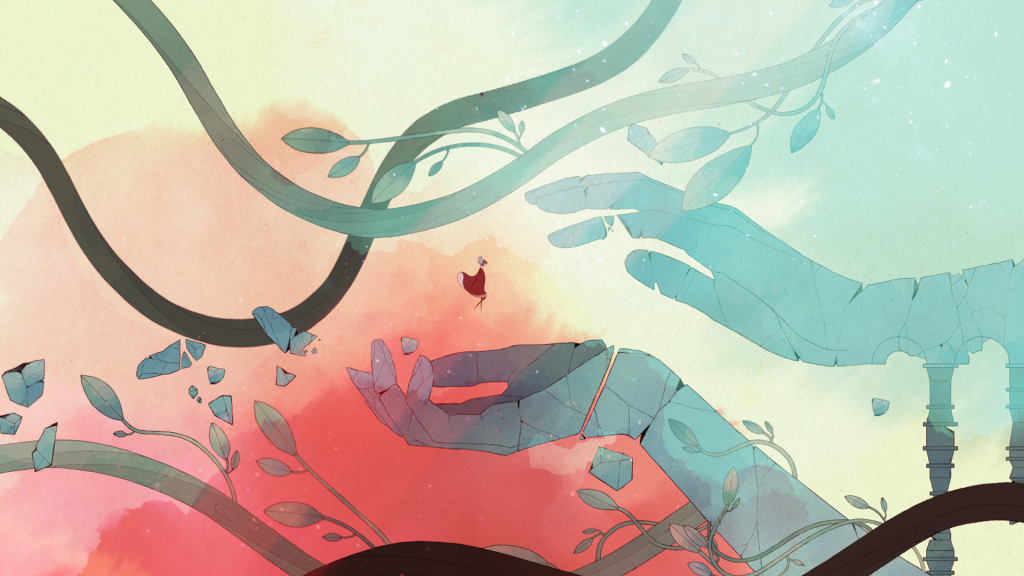 Not content to let the visuals do the heavy lifting, the game’s audio design is also magnificent, showcasing both an ear for amazing ambiance and distinct sound effects. The score underlying the adventure is somber yet rich, elevating to more evocative tunes during cutscenes and dramatic moments. Effects are soft, tickling your eardrum with the tinkle of stepping on a star path or the mild splash of entering water. Given the game has no dialogue, it’s important for the music to fill in the void — and it does so with ephemeral grace.

Don’t presume that this game is just a pretty face, either: while it’s certainly not gameplay focused, it’s not completely devoid of mechanics and design. Playing out as a platformer with light puzzles and fairly straightforward levels, you’ll traverse a couple different themed areas — a desert, a forest, and many more that can’t be properly described without visual reference — as you imbue the world with more colors. Generally the means to progress is fairly obvious, and there’s no way to really “die” in game, meaning the challenge is light. 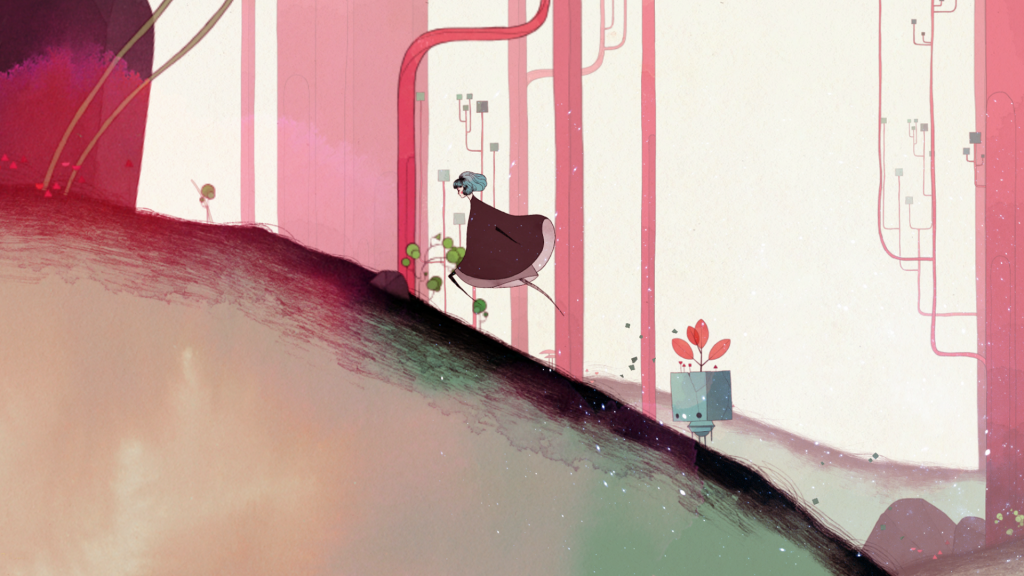 And that’s not to say it’s just a straight shot from beginning to end. Throughout each area there are a number of glyphs you can find for an extra challenge. Most are out of the way and require a keen observational skill, as well as a bit of platforming finesse, to find. To my knowledge they don’t lead to or unlock anything big, but they are a bit of a nice bonus to those looking to extend their playtime a little. There’s a couple other secrets you can find that have a bit more narrative weight, but I won’t get too deep into them, because they’re best experienced firsthand.

While it’s not mechanically intensive, the game design does exactly what it needs to do, sending you on a beauteous journey through florid landscapes that focuses more on emotional affectation than challenge. And for the kind of game that this is, that’s exactly what’s needed.

GRIS does have a few points where it falls just ever so short. The linearity of the level design means backtracking to find glyphs and secrets can be a bit tedious, which discouraged me from seeking out too many of them for 100% completion. And it’s a pretty short game, too — it certainly feels a good length, but since it’s not much of a “replayable” experience you could get more bang for your buck elsewhere. But these are mostly trivialities in the face of such artistry. 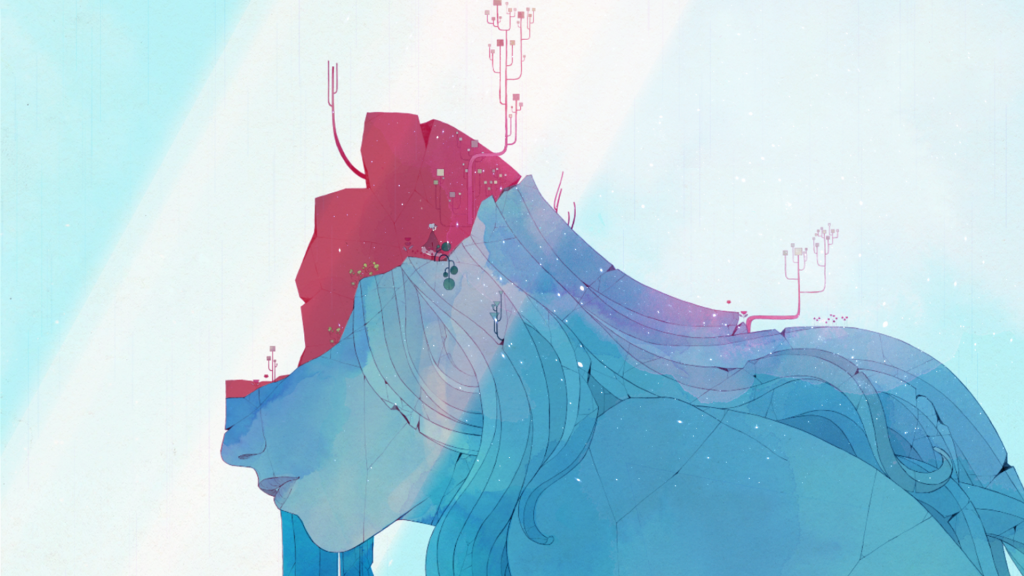 It’s a rarity for a game’s aesthetic to be its main selling point, but GRIS manages to tap into something deeper than just its own elegance. It’s a game that understands how to use each and every one of the brushes in its kit to paint an experience of unmatched elegance, equally breathtaking and heartrending. The ending left me with an unshakeable and bittersweet sense of hopeful melancholy, and I have a feeling that whenever I come across a great loss, I’ll be revisiting this game to help me process what it means.

As one of the last indie titles of 2018, GRIS also proves to be one of the greatest. Anybody interested in gaming as an art form should absolutely pick it up. It’s tender, it’s vague, and it’s inspired. And it will be a landmark in both visual design and abstract storytelling for years to come. 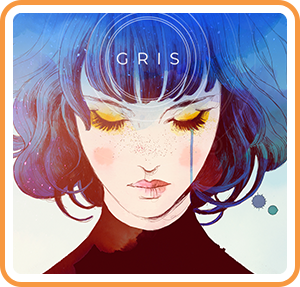