When it comes to any sequel, there is the inevitable question of just how much should be changed or kept from the original title. Change too much, and you run the risk of losing what made the original so great; change too little, and you’ll make the player wonder why you bothered in the first place. Good sequels are about finding the middle ground between the familiar and the new, the safe and the risky. Yet most will inevitably fall in one camp or the other.

Guacamelee! 2, Drinkbox Studios’ followup to the original Mexican Metroidvania marvel, is very much one that keeps to its predecessor’s ideas, aesthetics, and mechanics. And while the romp is still immensely enjoyable and brimming with personality, it’s difficult to deny that having the same bowl of guac a second time just isn’t quite as fresh.

Legend of the luchador

The intrepid sequel begins with the previous game’s climax, as the hardy and hearty Juan Aguacate defeats the dastardly Carlos Calaca to save his beloved Lupita. Now years have passed, and Juan has settled down into a retired family life with his wife and children… until the gap between dimensions begins to tear, and a space-hopping Uay Chivo tells him that the entire Mexiverse is in danger, and that he must travel to the Darkest Timeline to put an end to a new evil. Donning the mask once more, Juan resolves to burn off his gut and stop the dastardly Salvador from consuming the Sacred Guacamole, bringing an end to all realities. 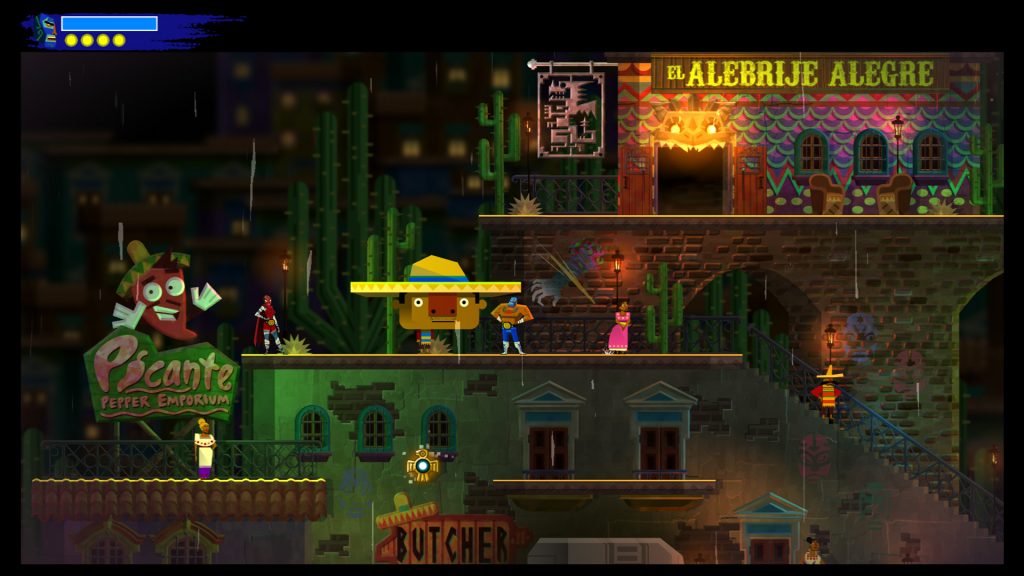 If you couldn’t tell by that plot description, Guacamelee is a very silly game, and one that is unabashed and unafraid in its zaniness. The bad guys are more endearingly weird than legitimately threatening, the plot threads are standard yet tongue-in-cheek, and the writing can veer between intentionally hokey and somewhat touching with surprising deftness. It also has a Chicken Illuminati. Which is just… an objectively good idea.

The game’s sense of humor may be a put-off to some, as it is rather laden with references and memes, but there’s a peculiar sincerity to the degree with which Drinkbox imbibes their game with memetic comedy. Part of it is just plain old self-awareness (one side area involves a trip to ‘The Dankest Timeline’, which needs to be experienced firsthand to be believed), but there’s also a sense that the writers simply love the things they reference — and the sheer number of games and other media properties that get nods in little background elements is staggering. I’m usually off-put by meme humor, but somehow the game proves endearingly absurd rather than irritatingly fatuous. And the end result is that the game proves even more comical and flavorful than the first.

In turn, not every aspect of the game feels like a marked improvement, such as the game’s aesthetic. Now, don’t get me wrong — the construction paper styled visuals and mariachi inspired soundtrack are still stellar, and immediately impart the feeling of playing Guacamelee again. But I couldn’t help but feel that their lack of a big shift in style was a big part of the reason the game felt so similar to the first. A bit more of a departure from their established look might have made the experience feel a little more differentiated from the original. 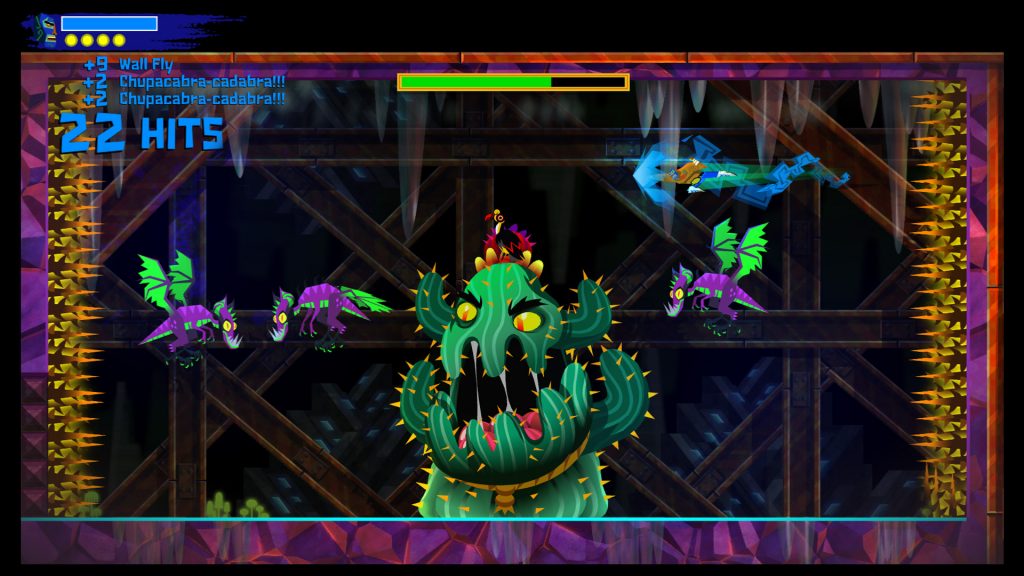 But in spite of that minor bellyaching, I do really want to express my appreciation for how distinct the game looks. It’s one of the brightest and most colorful games available on the Switch, as vibrant and varied as the hide of a piñata. The soundtrack can range from soulful and triumphant to mournful and pensive, each tooting of the trumpet imbued with a deep pathos. And the ba-gaaks of chickens clucking are just right, which is important considering just how many are present in the game (seriously, this game shoulda been called Pollomelee).

Guacamelee! 2 doesn’t fall neatly into just one genre, but it’s primarily a Metroidvania — you start off weak and lacking in moves in a wide open 2D world, and slowly gain abilities and upgrades to make yourself stronger and explore more areas than you could previously. Along the way you’ll bash baddies, purchase new skills, and scour the landscape for every last chest and collectible.

And, as a Metroidvania, this sequel is… a little underwhelming. Many of Juan’s moves are recycled wholesale from the first game, used in much the same way to open up areas (with the glorious exception of a new slate of chicken-based abilities that turn your rooster self into an engine of destruction). And were the game purely focused on that aspect, it would deserve some lambasting. But that’s not where this second course’s strength lies — much like the first, it excels not in pure design, but in its meshing of tight combat, tricky platforming, and legitimate challenge. 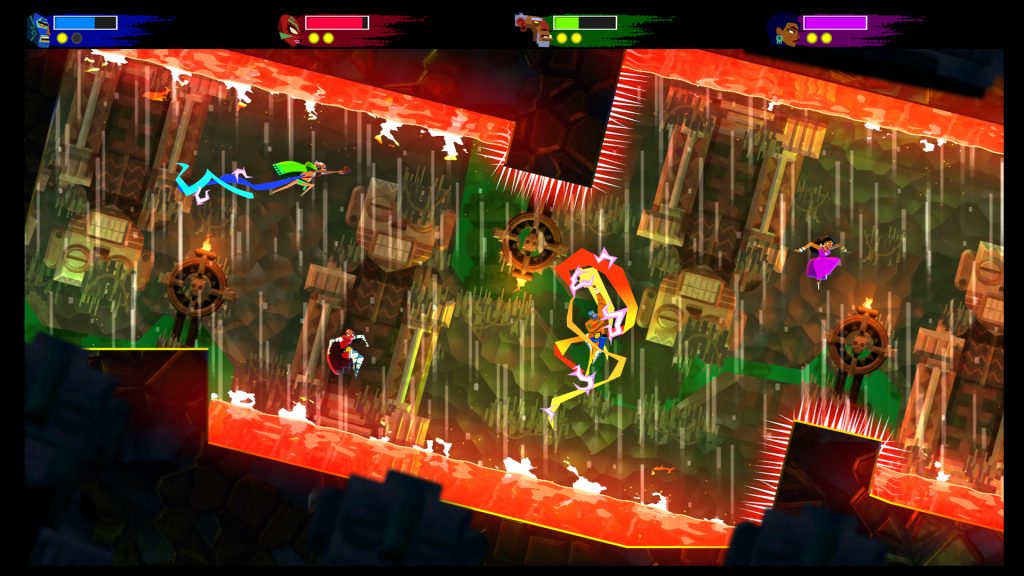 Lucha’s are not mere slugfests where you tap one button until you win, but rather combo-heavy tangos full of throws, special moves, and dimension hopping. There’s a wide swath of enemy types that all require different skill sets to handle, and few encounters play out exactly the same. Toss in the potential for 4-player co-op (which is almost certainly a first for Metroidvanias) and you’ve got a recipe for a bonafide brawl on your hands.

Even more enticing are the various side rooms full of challenges, testing the limits of your coordination and timing with all of your abilities. While the first game had some tough segments, this one feels like it ups the ante even further to create tightly-designed and well-crafted obstacles that will demand every ounce of concentration without ever becoming frustrating or cheap. 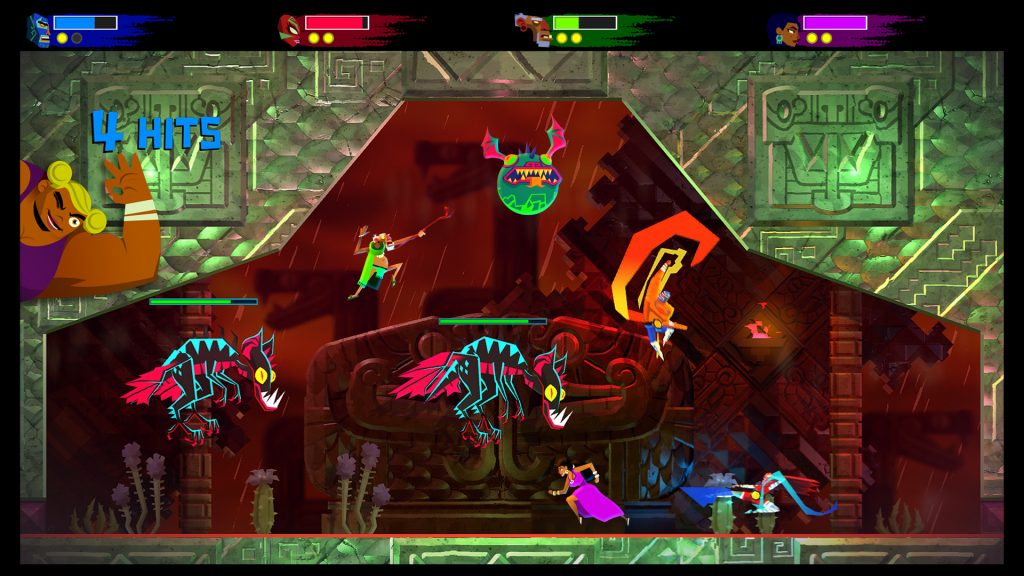 But there was one aspect of the game that felt even sharper — strewn throughout the world are portals into “alternate timelines” that essentially serve as shifts in gameplay. There’s one that serves as a turn-based RPG, one that acts as a loving allusion to Street Fighter, and even one that provides a hilarious parody of low-quality mobile games. There’s only about a half dozen throughout the whole game, but each one was refreshing and left me wanting more. I almost wish the game focused on these aspects more than just the traditional Metroidvania crawl.

I really liked the first Guacamelee when I played it back on the Wii U, and I would be blatantly lying if I said I didn’t enjoy the sequel on Switch. I clocked in at just over ten hours to get 100%, with each step being fun and engaging, and frustrations with the controls or the design being extremely rare. But at the same time, I could tell that the game didn’t leave as much an impression on me, simply because I’d seen a lot of it before.

Somewhat paradoxically, Guacamelee! 2 is far better if you haven’t experienced the first game — most story elements don’t rely on the first’s plot at all, and the design will feel much fresher to those who haven’t yet experienced the silly antics that the Mexiverse has to offer. But even if you have played the first, this is by no means a bad time — it’s just more of the same, that’s all.

Guacamelee! 2 is just as fun, funny, and well-crafted as the first one — maybe even more so. But compared to some of the other sequels in existence, it can’t help but feel just a mite stale. I’m a Drinkbox fan, and most definitely keen on whatever they make next — but whatever it is, I hope it has just that little extra spark that makes it one for the ages. 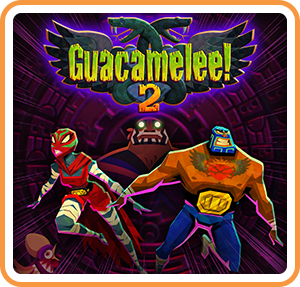