There’s no game we’re looking forward to more than Super Smash Bros. Ultimate and a big part of that excitement comes from seeing such beloved video game characters come to life. We were able to try out all of the new fighters coming to the roster in a near-final build at a recent Nintendo event, from Isabelle all the way to Incineroar. It’s time to see what a couple vampire hunters, an angry croc, Nintendo’s number one secretary, and a couple red hot martial artists brings to the fight.

Ultimate’s premier third party representation lies in the dark world of Castlevania, and carving through to take back the night are two generations of the Belmont clan. Other than aesthetics, I didn’t spot any large difference between Simon and Richter, making them some of the cleanest cut Echo fighters on a first impression. That led me to lean more towards Richter just out of liking him more as a character, but both stand as great transitions of their home series.

The Belmonts main claim to fame lies in their range. Several of their attacks use the far-reaching Vampire Killer whip to the fullest, with specials that handle different diagonal angles. Just like it’s sometimes more beneficial to throw an axe or some holy water in Castlevania, so too can they use these items via their down and neutral specials respectively. Their other defining element though wasn’t so enticing. Several of their attacks have noticeable wind-up animations or slow attack speed. You have to commit to your actions to succeed with these two.

The special I got the most mileage out of though was the cross. Throwing this slow moving, boomerang projectile can control tons of horizontal space; and while that seems redundant with the whip also doing this, it opens the door for tricky setups. Just be warned that their up special isn’t the best recovery, though being able to latch on to the stage using their whip-based normals adds a few other options for survival.

The most maniacal thorn in the DK crew’s side is finally here, and King K. Rool doesn’t disappoint in the power department. If anything stood out from this eye-twitching terror it was just how much damage and knock-back he could lay on. This makes him the second, villainous reptile build around laying on the hurt coming to Ultimate, but unlike Ridley before him, K. Rool has some unique tricks up his cape to keep opponents guessing. 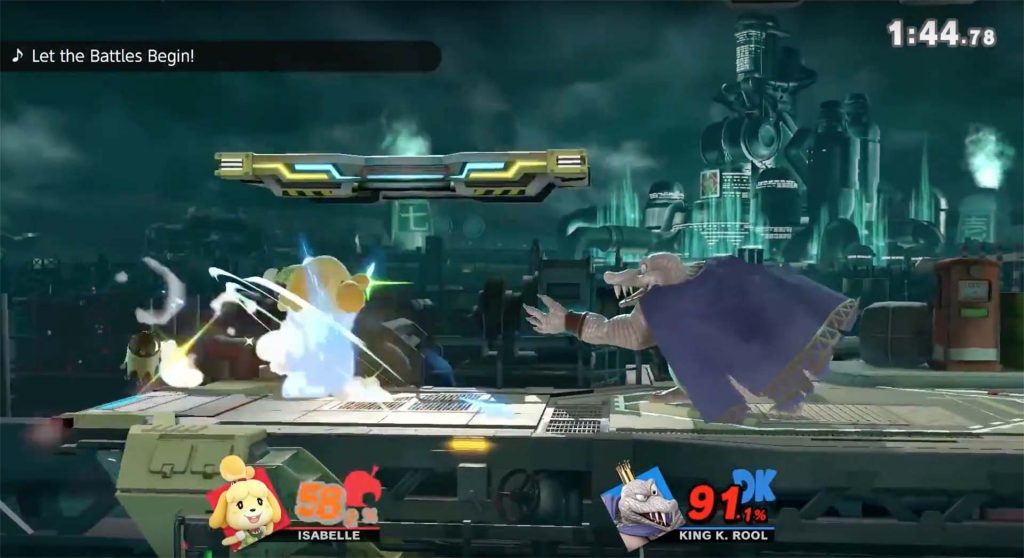 By throwing his crown, K. Rool can also control some decent space in front of him, but he has to catch it again when it comes back lest he lose access to the move. He won’t be high and dry when it comes to projectiles without it though — the blunderbuss gives him not just a cannonball projectile, but something of a tricky mixup. If an enemy dodges wrong, they can either get pulled into the gun’s suction itself, or they might be at the perfect angle to get hit by a followup diagonal shot.

With these tools and his counter special, K. Rool seems to benefit most from standing his ground and playing more defensively. Once an opening makes itself known though, he has the vicious power to get KOs extra early. Just be aware of his lack of speed all around, or they can catch you with your gut out. As short as his hops are, this heavyweight might have one of the best recoveries in the cast with his fast-moving and hitbox-having helicopter pack, making him extra resilient both on the ground and in the air.

As previous footage has shown, Isabelle borrows some of her moveset from Villager. Their Pocket specials are, as far as I could tell, identical — and Isabelle also had some familiar looking normals like her dash attack and down-air. That said, she’s no Echo, with plenty to set her apart as a fighter. The most apparent is just how cute and emotive she is — expect plenty of smiles from this pup.

If there are two things Isabelle does exceptionally well though, it’s recover to the stage and control space. Her up special calls out a balloon chair for a long and leisurely free flight back to solid ground, covering plenty of distance as long as you can avoid the balloons getting popped. Along with that, her Fishing Rod side special can function as a tethered recovery as well. These two give her range both horizontal and vertical, though her regular jumps are nothing unique and she is a little on the lighter side of the cast. 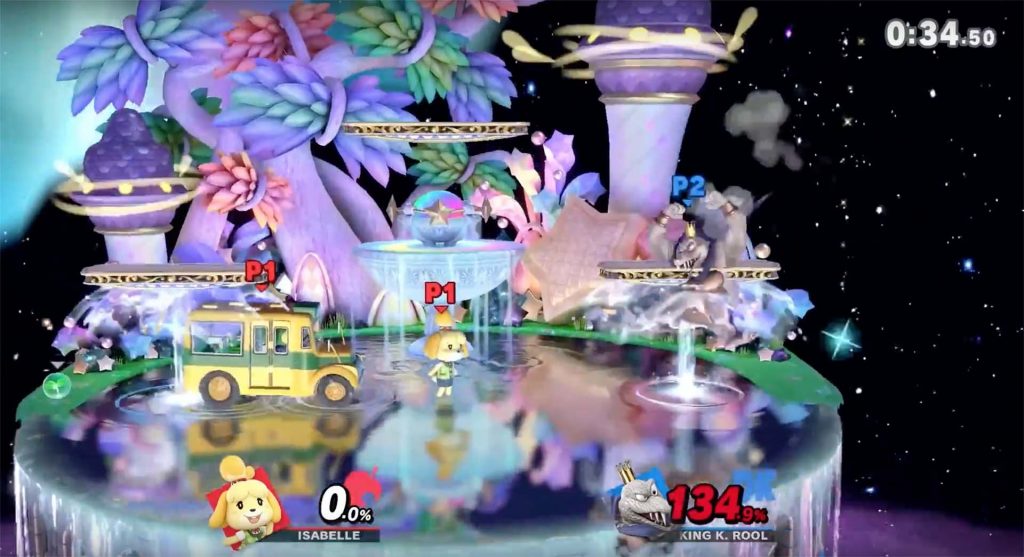 That Fishing Rod is for more than just getting back to the edge though. If it hits an enemy, it’ll pull them in for a free grab, so long as the lure touches them. This counts even if the initial cast misses and they walk onto the lure itself, which you can leave on the stage seemingly indefinitely. Placing that and an underground Gyroid trap (her down special) that’ll fire upward if anyone steps on the seed, which can make getting close to Isabelle trickier than others. This is offset by her own need to get in close to fire off her party popper side smash and other attacks. Overall, Isabelle came off as an interesting and entertaining fighter through and through.

Ken’s another Echo Fighter coming to the cast, serving as a flashier and more dynamic alternative to fellow Street Fighter Ryu. Of the new cast he was the character I spent the least time with, but I walked away impressed and more interested than I had ever been in Ryu. His kick based moveset translates well to Smash, and his flaming Shoryuken is an especially welcome addition if you’re performing the traditional input for the move. He stands as one of the Echoes most separated from his base character, but he still can’t shake the label to stand out as a wholly “unique” addition, for better or worse. 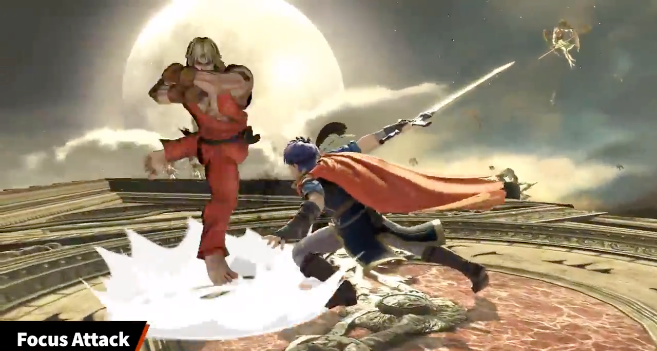 Now we come to the fighter I expected the least out of back from his reveal. I was firmly in the camp that wanted Decidueye as a Gen VII Pokemon, but this fired up pro wrestler got me warming up to his bombastic personality and moveset. The way Incineroar grandstands and works the crowd between attacks is entertaining and puts him alongside DK, Dedede, and Isabelle as some of the most emotive characters in the cast.

While his normal attacks are serviceable, with him having the tools he needs to roll with the punches up close but maybe struggle with more ranged fighters, it’s Incineroar’s specials that define him. His side special is a forced grab state, tossing the unlucky opponent to the ropes and opening the door for a followup. While the perfectly timed lariat is hard-hitting, I was surprised how much vertical knock-back you could get with a different one of these followups. For added utility, Incineroar is practically invincible to knock back as long as he’s thrown the enemy already. 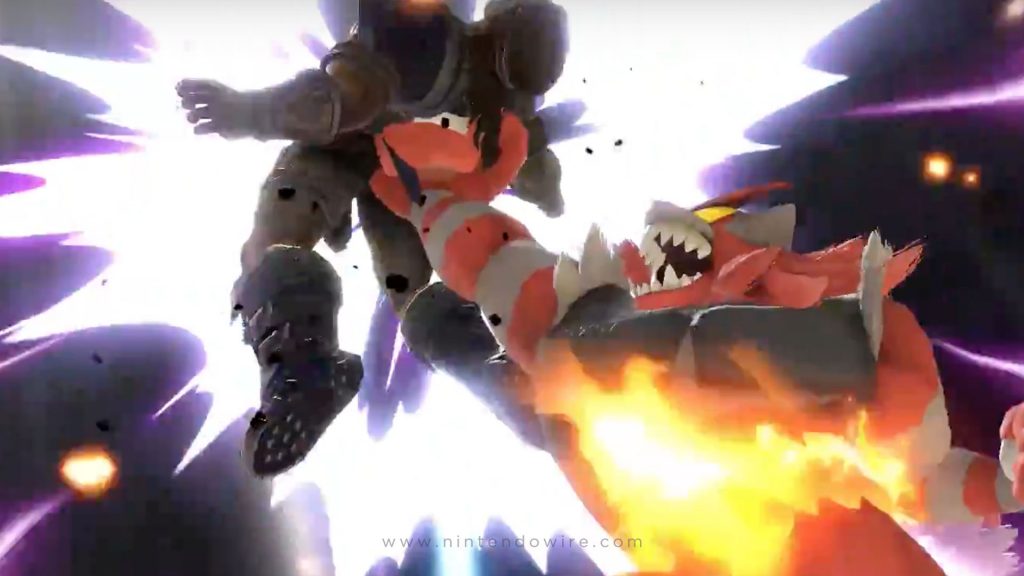 The special that closes out Incineroar’s game plan is his Cross Chop recovery. In short, it’s terrible. It offers very little height (though his side special can be used somewhat like Ike’s to cover horizontal distance), and worst of all it sends him rocketing downward, potentially to your doom. It does have its uses, as I was able to drag someone down with me in a mutual KO using the move, but as a tool to get back to the stage it’s one of the worst on the roster.

That’s it for the roster as-is, but there’s still plenty more to experience. These were only early impressions and it’ll take a whole lot more time in the lab via the final build to really crack these new fighters open. Plus with Piranha Plant and other DLC fighters to look forward to, along with the changes to the existing cast, it’s going to take a lot of work to really get the hang of the 70+ fighters in Super Smash Bros. Ultimate.