Arcade games coming to home consoles has been a part of this industry for decades. You can play Pac-Man on practically anything (heck, even Google) and compilations of classics are par for the course. These bastions of flashing lights aren’t so common in America, but in Japan they never really left. If anything, the games have gotten more dynamic and varied, with unique cabs and controllers creating experiences you just can’t replicate outside of game centers.

Enter Taiko no Tatsujin, or Taiko Drum Master. Giving players massive drums to play on with actual sticks, it was and continues to be a big hit. I spent plenty of yen on this one back in Japan, with its massive song selection, host of crossovers with games and anime, and the novelty of playing it going a long way. Now a home console version has come overseas for the first time in a long time, with the Switch’s Joy-Con serving as your makeshift drumsticks in Taiko no Tatsujin: Drum ‘n’ Fun!. It may not be a perfect recreation of the arcade experience, but for rhythm and party fans, this one keeps a steady beat.

Drumming up some fun with Joy-Con in hand

The bulk of your time in Drum ‘n’ Fun! is going to be in its Taiko Mode. You’ll pick from the game’s song selection, categorized into genres like Pop, Anime themes, Vocaloid songs, Game music, and more. While there’s variety here, nearly every song is in Japanese and runs the risk of being unrecognizable to a western audience. It’s an easy hurdle to cross though, as what’s on offer has variety as far as overall sound and BPM. I found a few new favorites to play regularly as I tried to climb from Normal up to Expert/Oni difficulty. 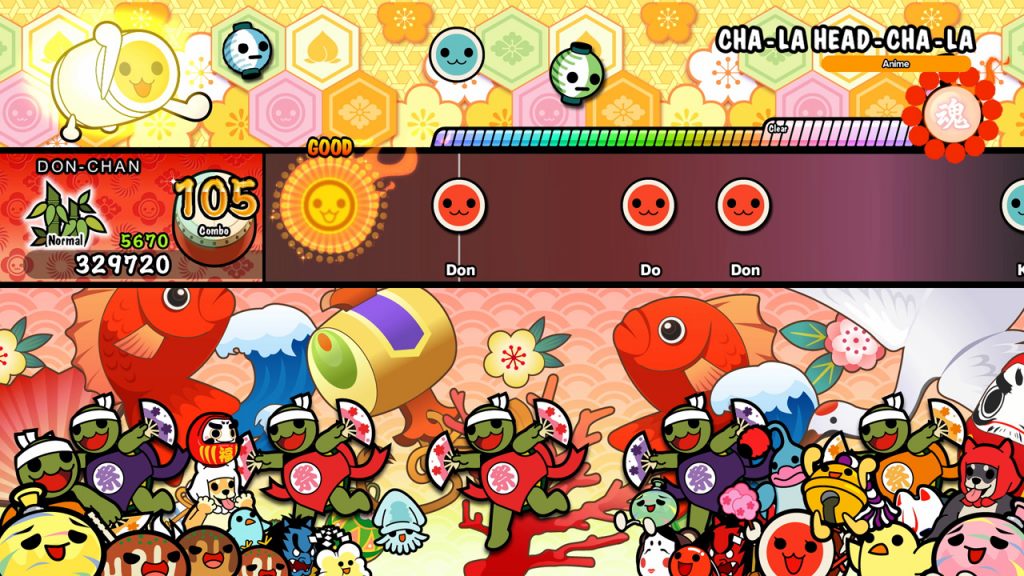 For anyone unfamiliar, Taiko no Tatsujin plays very similarly to Donkey Konga (developed by the same team, no less). Rather than slapping two bongo skins, you have two fundamental types of drum strikes: Don (red notes, the drum’s skin) and Ka (blue notes, the drum’s rim). While there are button based controls and an importable drum controller, the Switch exclusive motion controls have been my go-to for this review.

Swinging a Joy-Con straight down will count as a Don while coming down at a diagonal angle will produce a Ka. Throw in drum rolls and big notes that need you to match both sticks together, and there’s plenty of variety in the song charts to keep the drumming addictive. Just be aware that pending your TV settings you may need to calibrate in order to keep time properly. I ended up playing more often in tabletop mode which kept things running smoothly, for the most part. 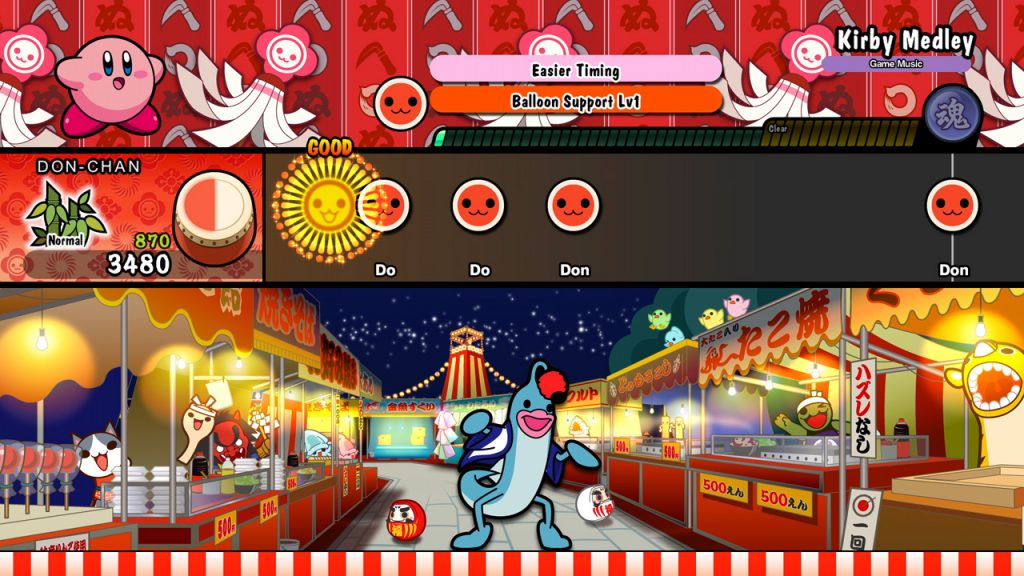 While the calibration issue was easy enough to conquer, one common problem has been things like accidental “hits” and making sure the Joy-Con are angled properly for the right kind of hit. While I hoped this could be overcome with enough practice, even with several hours under my belt the Joy-Con seemed to think I was swinging more than I actually was. It can be frustrating, though at the least the extra hits don’t tank your combo and score — and it was really only more noticeable on harder and more note-heavy songs.

Not just a one-person show

If you’re not out to be a high score hero or a ranking rhythm champion, there’s plenty more variety and fun to be found in this one. Anytime you play you can pick a character that will add various modifiers to your drum session. This extends to the Nintendo crossover characters, with Kirby making timing a little easier while the Splatoon squid affects your meter (determining if you clear a song or not) gain. 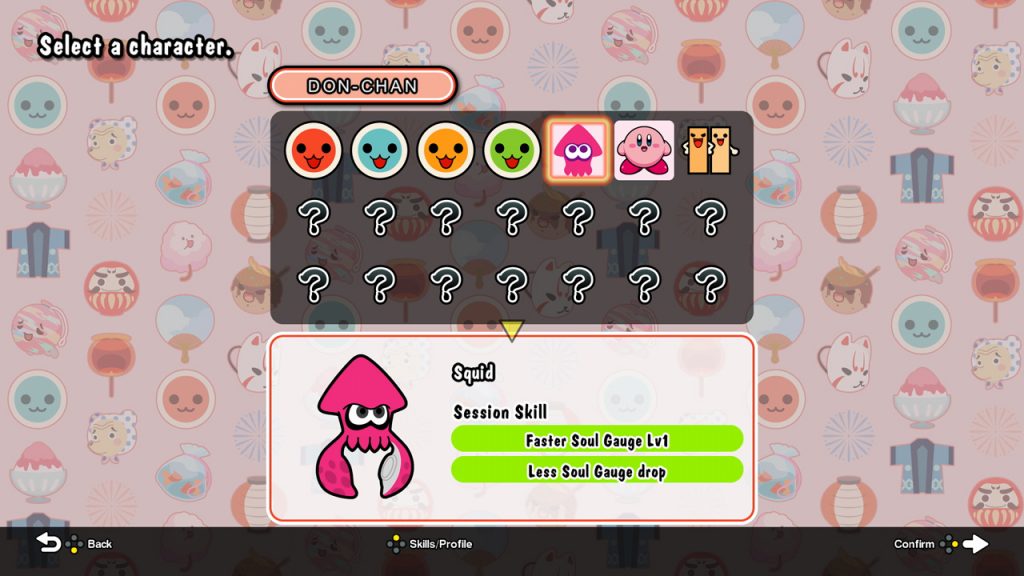 These aren’t the only bits of Nintendo flair here, with three songs coming from popular series. Kirby and Splatoon both gets medleys that are true to form, but it’s Super Mario Odyssey’s “Jump Up, Super Star!” that steals the show. Still, if you’re expecting songs from several Namco arcade classics or popular franchises, the game music section might be the one that comes off as the most shallow, save for these Nintendo highlights.

You can also play this mode with two players, turning any solo session into a duet or duel. You can either team up and play through a song together, or face off in a Versus drumming battle. It makes a great local experience if you’ve got enough Joy-Con, and can make even songs you’ve played countless times feel new again. The character selection adds another layer as well, giving buffs to less experienced players or limiters on experts to level the playing field. 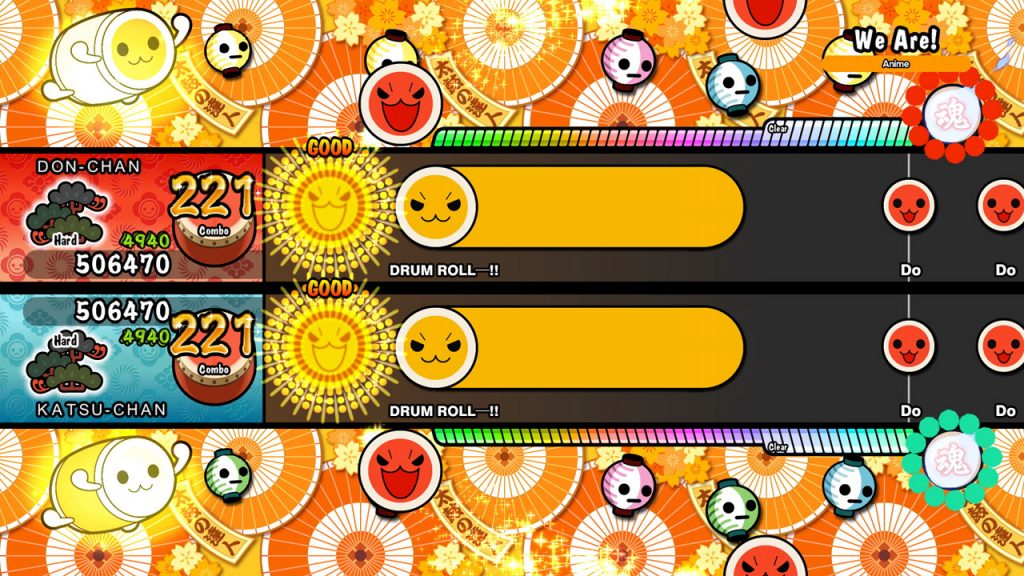 The other main mode in Drum ‘n’ Fun is Party Game, a collection of minigames for up to four players. Taking cues from Rhythm Heaven and Mario Party, it’ll have you slurping up noodles, ordering sushi, and plenty more in time to the music. While the variety isn’t too impressive, it makes the most of Taiko’s adorable cast of characters to offer up some laughs in competitive, cooperative, and team based games made best with friends.

Plenty of drum, plenty of fun

There’s an inherent novelty with Taiko no Tatsujin. It’s a game about banging on giant drums in a never ending Japanese festival environment with anthropomorphized drums constantly cheering and winking. It’s hard not to smile while you play this game, and even if it isn’t perfect or have the most extensive track list (especially compared to the arcade versions), I keep coming back to it as my go-to rhythm game on Switch for the time being.

Your enjoyment with Taiko no Tatsujin: Drum ‘n’ Fun! is going to come down to two main factors: how well you can adhere to its motion controls and how much you enjoy its soundtrack. The button controls get the job done but lack the novelty and replicated feel of swinging your Joy-Con. Granted, it lacks the satisfying impact of the physical drums you’ll find in arcades — but even with occasional recognition problems and its soundtrack limitations, it more than lives up to the titular Drum ‘n’ Fun promise. 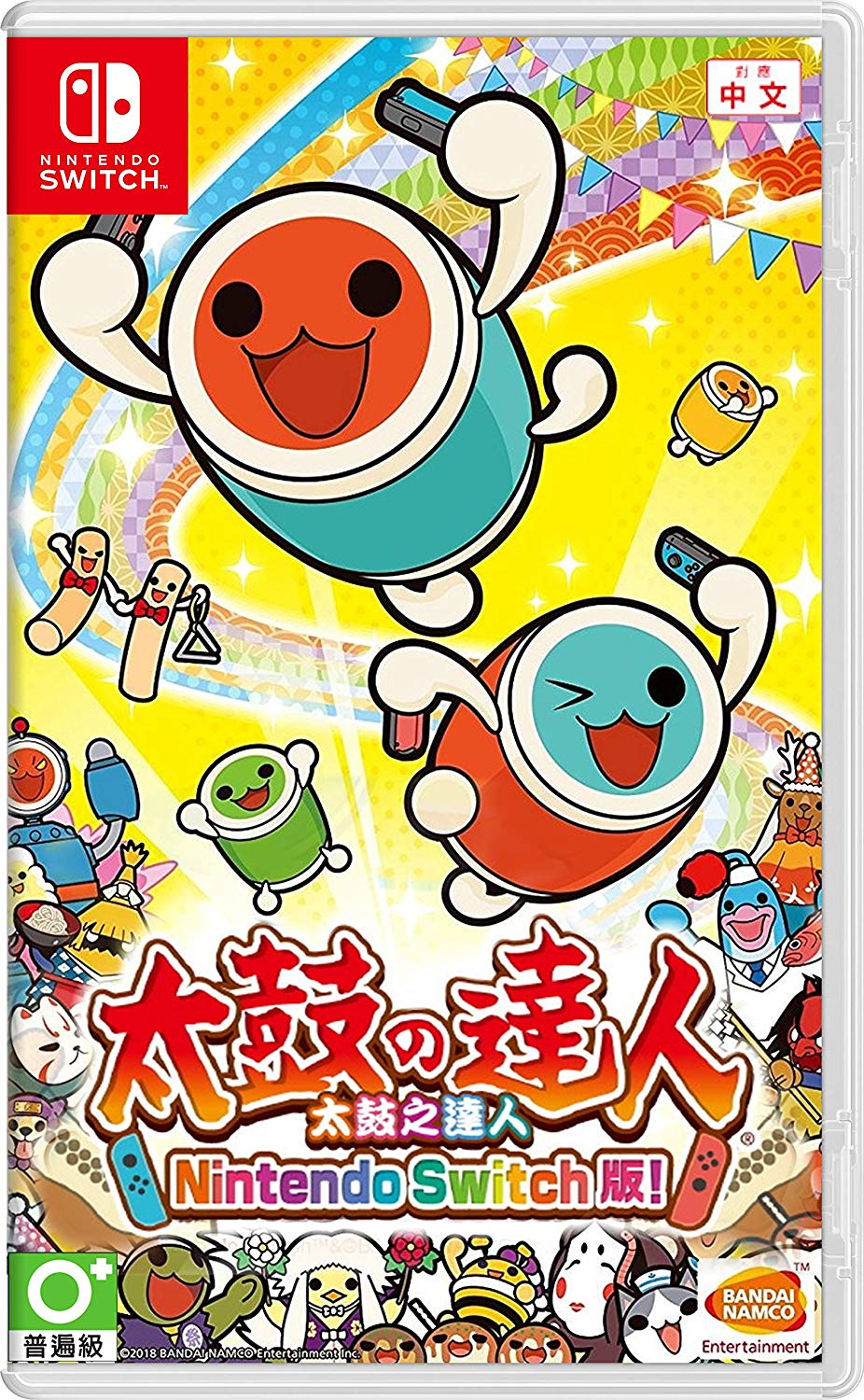