In Moonlighter, you control Will: a young man left in charge of his family shop, which shares its name with the game. The shop is in the small, dying town of Rynoka, and it’s up to the success of Will’s business to restore life to the township.

The mysterious dungeons lie just outside of Rynoka. These ever-changing labyrinths provide lots of mystery and intrigue for the town, especially when it comes to the game’s hero. It’s said that if you gather a special artifact from all four dungeons, you’ll unlock the door to the ominous fifth dungeon. Will has always wanted to be the one to open the fifth door, but he feels an incredible external pressure to run the shop and restore Rynoka to glory. The storyline seems a bit weak at first, and the town NPCs never really have anything valuable to say — but in the end, the tale serves as a great setup to Moonlighter’s addicting gameplay loop, which I’ll get into now. 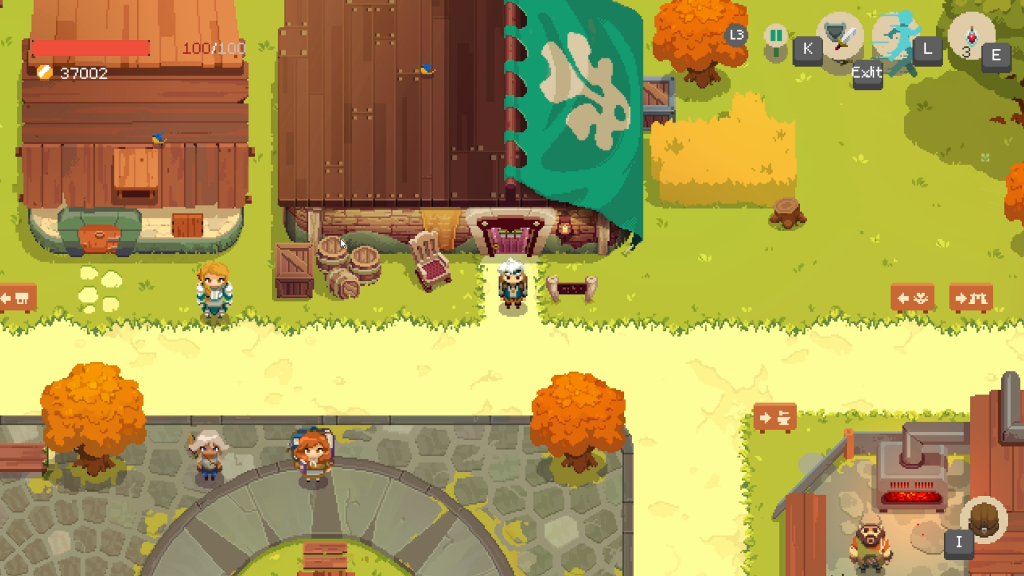 When the moon is in the sky, it’s time for Will to head into the dungeons. The four main dungeons of the game each have three randomly generated floors, followed by a boss fight. Will starts the game equipped with a sword, shield, and his trusty broom, which you use to fight off the enemies that litter the dungeon floor.

Combat begins as a relatively simple affair, but it grows in nuance as Will gains access to new equipment. I found my favorite to be the bow and arrow so I could keep my distance from some dangerous enemies.

Each enemy drops materials after it’s defeated, which the protagonist has to fit into his bag. The bag contains only 20 slots, so I had to be very selective when I got deeper into a dungeon, often leaving stacks of common materials behind in order to fit one rare material. That said, bag management is a game all by itself. Some items have to be placed in a specific row of the bag, some items destroy another item upon placing it in your bag, and others immediately send an item back to the shop for safekeeping. It was fun figuring out where to place specific items, and it added a layer of depth to inventory management, an element that I often find overlooked in games. 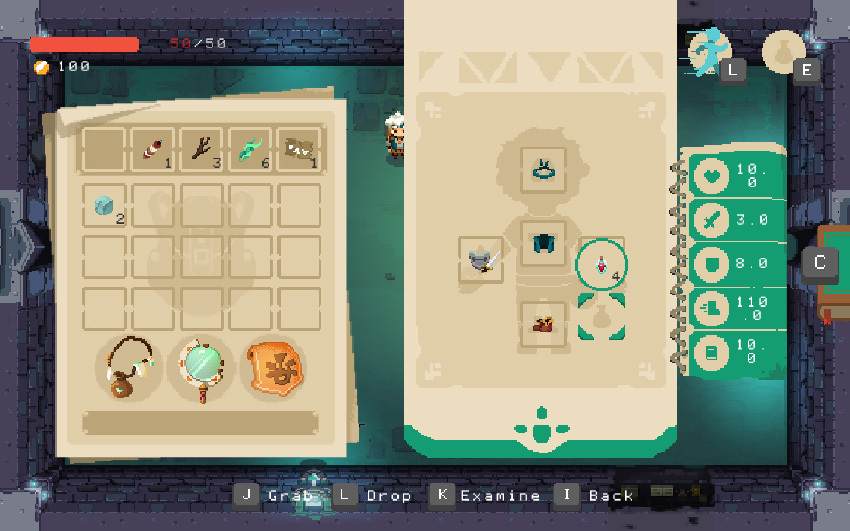 The dungeons are randomly generated each time you enter, but there’s enough familiarity with the room design that I never felt completely disoriented upon entering a dungeon. Your goal is to find the door to the next floor, fighting any enemies and picking up materials along the way. The floors get progressively harder, which leads to Moonlighter’s most intriguing gameplay hook: learning when to call it quits.

If you die in a dungeon, you lose everything in your bag that’s not in the top row of your inventory. I spent most of my time with the game on Hard Mode (the recommended difficulty). Some of the later floors become extremely difficult, forcing you to make a decision: Do you bail now and save your materials, or try to make it through one more room to get some sweet loot? More often than not, I made the wrong decision and paid the price, losing everything I’d just gathered. Luckily, Moonlighter’s pacing is pretty fast, so I never lost more than 10-15 minutes of progress after an unfortunate death. Early on in the game, I gained the ability to teleport to specific points in dungeons, so I could roll back into Rynoka to heal or grab a quick upgrade before heading back into the dungeon.

I had a great time in the dungeons in Moonlighter. However, due to the rogue-lite nature of this game, going into the same dungeon time and time again got a little bit stale during the longer play sessions. For this reason, Moonlighter is perfectly fitted to play in bite-sized chunks.

In the daytime, you get to run the shop, talk to the townsfolk, and go on a little shopping spree for yourself. Manning the shop was what drew me to this game in the first place, and I’m happy to say that it’s remained my favorite aspect of Moonlighter. 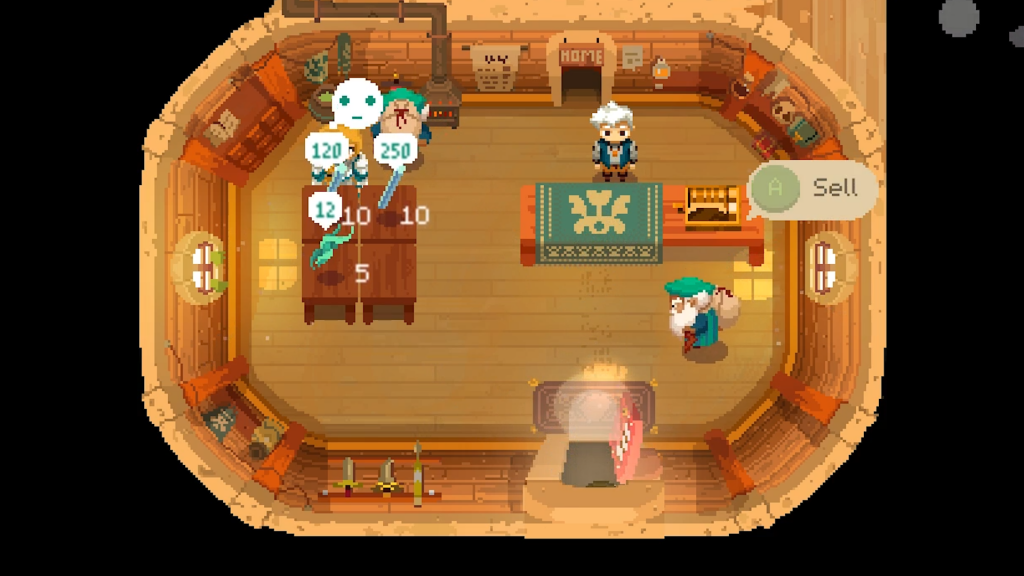 Instead of just selling your loot to a shop to get your coin, Moonlighter makes you earn it by selling it to customers instead. You place items on the store shelves and also determine their starting prices. You’ll only know if you set a fair price based on customer reaction. If the price is too high, you’ll see a sad or angry face. If it’s too low, their eyes will light up at the sight of a great deal. If it’s just right, you’ll get a simple smile.

There’s also a supply and demand system that affects the price point customers will be happy with. Finding the fair price for an item is a fun and unique system that Moonlighter pulls off exceedingly well. Will keeps a notebook where he writes down all the prices that items sell for, so you don’t have to remember everything yourself. The notebook is easily accessible, too, and it comes in handy for selling and crafting.

Speaking of crafting, equipment and magic upgrades are the other big part of Moonlighter’s day cycle. Once you’ve earned enough money, you can pay to open up different shops in Rynoka, like an armor and weapon shop, or a magic shop. When it comes to this feature, you’ll need a certain amount of money and materials to craft upgrades to your weapons, armor, and magic skills. This system also feeds into Moonlighter’s addictive loop. If you see you’re only one item short of being able to craft something, it makes you want to head back into the dungeon for one more round. 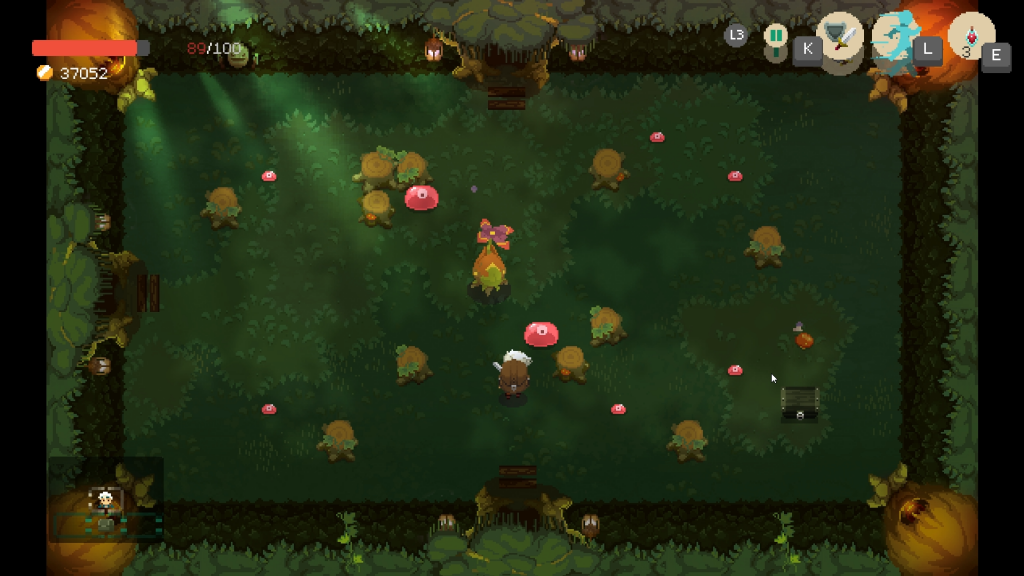 I also enjoyed paying for upgrades to my shop. The Moonlighter started out with only four slots for items, but I soon upgraded it to include eight item slots and a tip jar. There’s a large amount of customization within the shop as you keep upgrading it, so you can decide how you want to earn your fortune. Just watch out for thieves!

Moonlighter is a solid action RPG that incentivizes more playtime with a great gameplay loop and addictive hooks. It’s fast to play through one day-night cycle, which makes it a perfect pick up and play option for Switch. The shopkeeping element is a great mechanic as well, making the game stand out from other action RPG titles on Nintendo’s newest handheld. Overall, Moonlighter is a great addition to the Switch library that shouldn’t be missed. 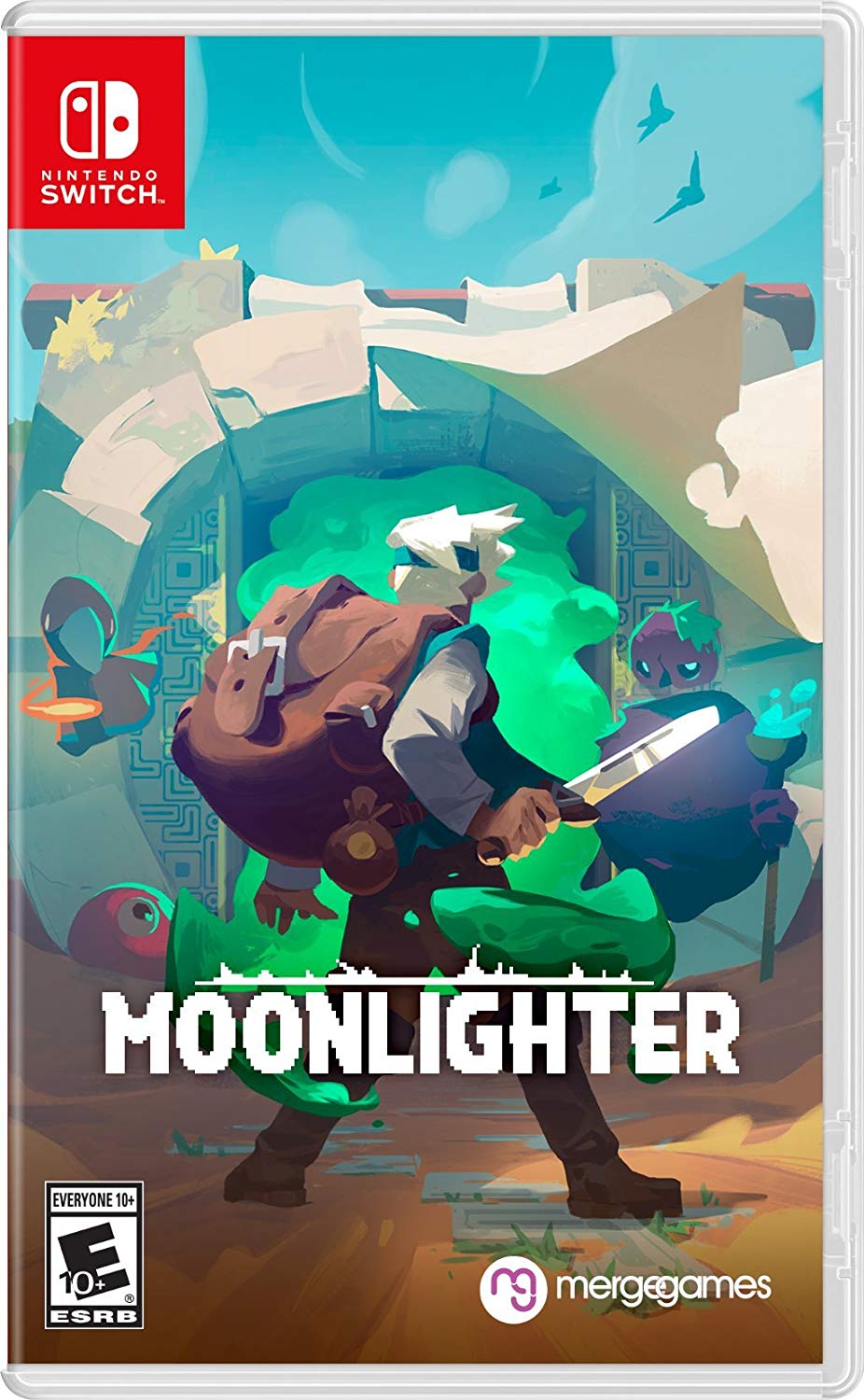