Games inspired by Nintendo’s earliest home consoles are easy to find, but once you’re on the go that reverence seemingly drops off. There just isn’t as much love for the Game Boy, which is a shame considering it was my first game system and home to some of my childhood favorites. Thankfully, a squishy little hero is coming ashore to fix this oversight in a fully-featured homage to the classic handheld. Save me Mr Tako: Tasukete Tako-san looks to bring you back to the days of green screens and pixelated good times, and while it nails the style and has a ton of charm, a few invasive issues hold back this story from being a perfect window to the past.

Save me Mr Tako sets the stage by playing out a conflict between multiple countries, including the undersea octopus kingdom our hero’s from. Though he’s a silent character, he’s instantly likable thanks to the cute design and deeds both controlled and within cutscenes. Standing in the way of his crusade for peace between humans and octopuses are his own brother, the rulers of human nations, and more; though you’ll pick up some friendly allies along the way as you show people that no matter where you come from, you can care about anyone. It’s both a little silly by default and earnest in its story, one of the best combos for a glorious Game Boy throwback title like this.

Back in time and feelin’ fine

Save Me Mr Tako looks to take you back to ‘89 in its aesthetic and design. You’ll jaunt through multiple hubs with doors leading to individual stages or sections to play through. By default, everything’s in the trademark green of the Game Boy screen, though you can swap through various palettes at any time with the touch of a shoulder button. Sometimes I’d cycle through these over and over as quick as possible just to make things a little more colorful, or use it to suit my current mood. It doesn’t exactly affect the gameplay in any respect, but having so many options (and some of them being deeper Game Boy references in their own right) makes it one of my favorite features here. 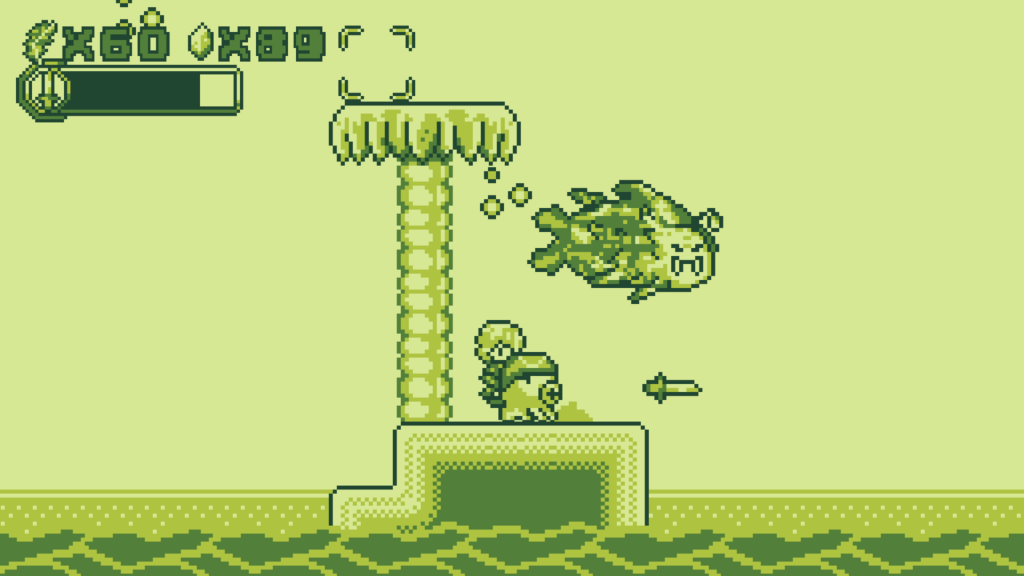 While I won’t claim to know every corner of that handheld library, the games that Mr Tako seemed to evoke most were shades of Kirby’s Dream Land and Wario Land for the look and gameplay itself, and The Legend of Zelda: Link’s Awakening for its world and character interactions; with a little bit of the near-GBC title The Legendary Starfy in the aquatic theming for good measure. But this love letter to that system has bits and essences to others, making me think of the likes of Pokémon, Kid Dracula, For the Frog the Bell Tolls, and some other old favorites in the best way. I also have to mention there’s a boss fight that pays tribute to one of my favorite in all of gaming, so hopefully you’ll find your own moments here as well. If you’ve fondness for these and games like them, you’ll be right at home.

Once you get going though, jumping is very loose and floaty, with Mr Tako and the other playable characters getting plenty of air by default. You have fairly good horizontal movement and acceleration, though I found sections where you had to measure your vertical height with some care much trickier. There was also an odd ledge slide to the game’s platforming, where if you were up against the edge of a platform you would kind of slink your way up on top as long as you managed to angle it just right. It took some getting used to and would occasionally throw my timing off, but it’s a nice, gravity defying concession for lack of any other direct aerial maneuverability. 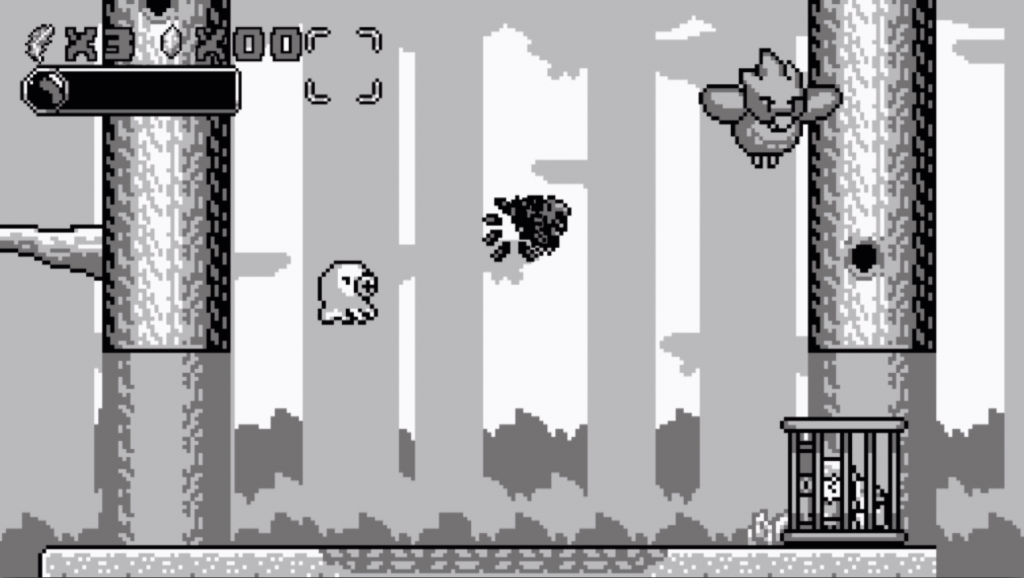 Your other main tool is firing ink, as any good octopus worth their salt water should. This doesn’t damage enemies, but stuns them and allows you to jump off of them as platforms or push them out of the way. Since some enemies jump, fly, or are just taller than others you can lead them on to certain spots before inking them and make the most of your new stepping stone. Finding hidden sections or people to save using well placed enemies becomes second nature in time, and made me want to see every inch of every stage if I could help it. Ink refills are plentiful, so unless you’re spraying with reckless abandon you should never be without your jet black barrage.

While the game runs at a great pace, sometimes the way enemies respawn or the camera switches can lead to unwarranted issues. Ghost enemies (that would be right at home in Lavender Town) have a habit of circling around and then rushing you; however, sometimes if you were to lose a life and respawn they’d follow you back and run through their pattern again even when they didn’t previously populate that section. On their own that’s not much of a hassle, but it made certain sections into a death loop based on other nearby enemy positions. As for the camera, it’s almost always on Mr Tako, but when you trigger buttons that unlock doors or spawn platforms, it’ll move to show you where that’s happening. During those moments you can still walk off ledges or get hit by enemies, with no way of knowing it’s happening until it’s too late. These and other occasionally glitchy moments are unfortunate, but when they game lets me use its tools and stage design to the fullest it can be a lot of fun. 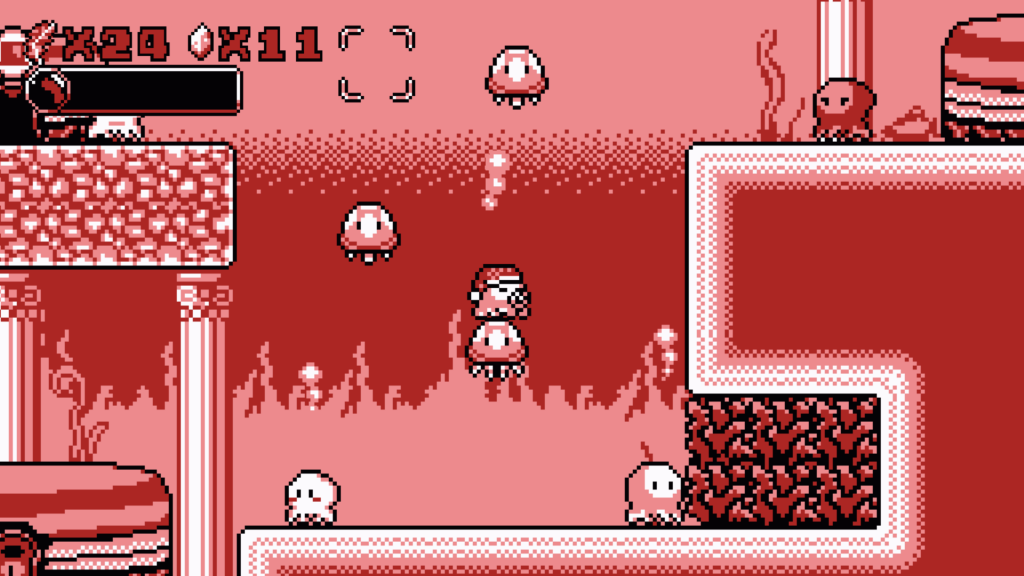 You’ll use those skills to progress through linear stages most of the time, though occasionally you’ll find yourself in towns or dungeons, requiring a little socialization or light puzzle solving respectively. I was surprised by the amount of side quests and minigames the game had alongside the main story, making for a lengthier experience than I initially expected. All of these extras usually come back to the game’s core collectible: hats. By progressing through the game, talking to the right people, or backtracking with new skills, you’ll build up a haberdasher of around 50 hats that grant Tako various abilities beyond his ink.

Granted, many of them are used to accomplish the same thing. One of the earliest is a Robin Hood-esque hat that gives you a bow and arrow. This replaces your standard inking, letting you fire farther and more reliably to the point you could even aim out of frame if you knew something was coming. Other variants gave Tako bouncing orbs, a short range whip, and one that fires cats as a projectile. Whether you’re playing to look as good as possible or picking one that gives you an edge in game, these 50 pieces of headwear add a layer of fun and customization that may be thin by today’s standards, but offer up plenty of fun in a Game Boy styled title. 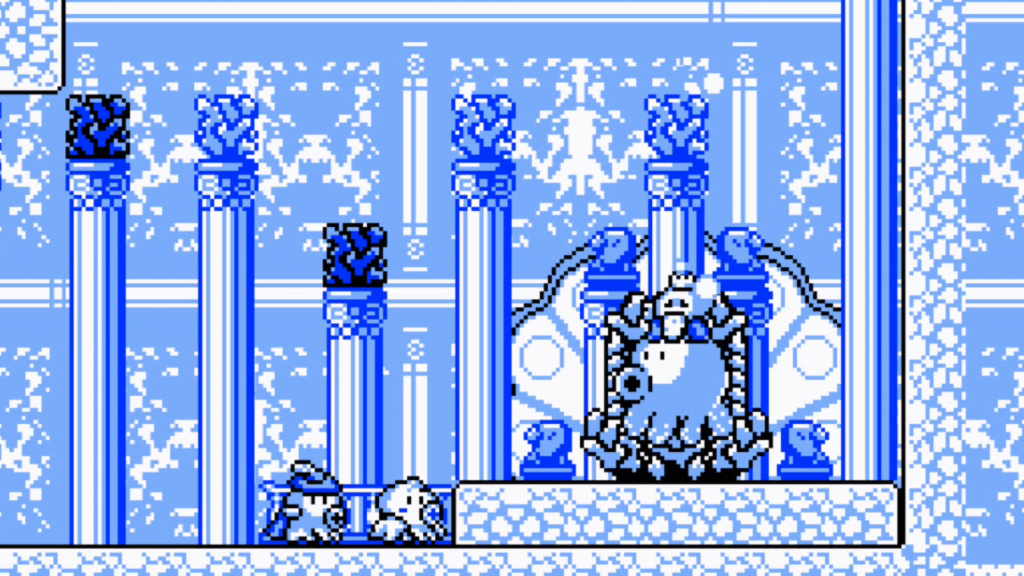 What all these hats have in common though is that they serve as an extra hit point for our cephalopodic savior. Good thing too, as it only takes one tap on Tako-san to cost you a life, Super Mario style. This single hit point status can be a real pain in certain stretches of the game, but respawning is fairly quick and checkpoints make things a little more bearable. The penalty for losing all your lives is just being bumped from the stage you’re in and forced to take it on again with three more lives to pull it off with. It’s fairly standard fair for the games this takes inspiration from, but the quick one hit deaths when your head’s not covered might off put some not as familiar with that kind of difficulty.

Fun as searching for secrets and getting through stages was, the real joy of Tasukete Tako-san was its story. Dealing with themes of warring nations, familial bonds, the struggles of the weak versus the strong, and the power of compassion over conquest, it was surprising to have these within what on the surface looks like a cute, time forgotten Game Boy game. It’s all the better for it, as while these elements got me thinking and caring, they never felt heavy-handed. Call that compliment to the game’s script and overall style, never losing its vibe even when dealing with more serious subject matter. 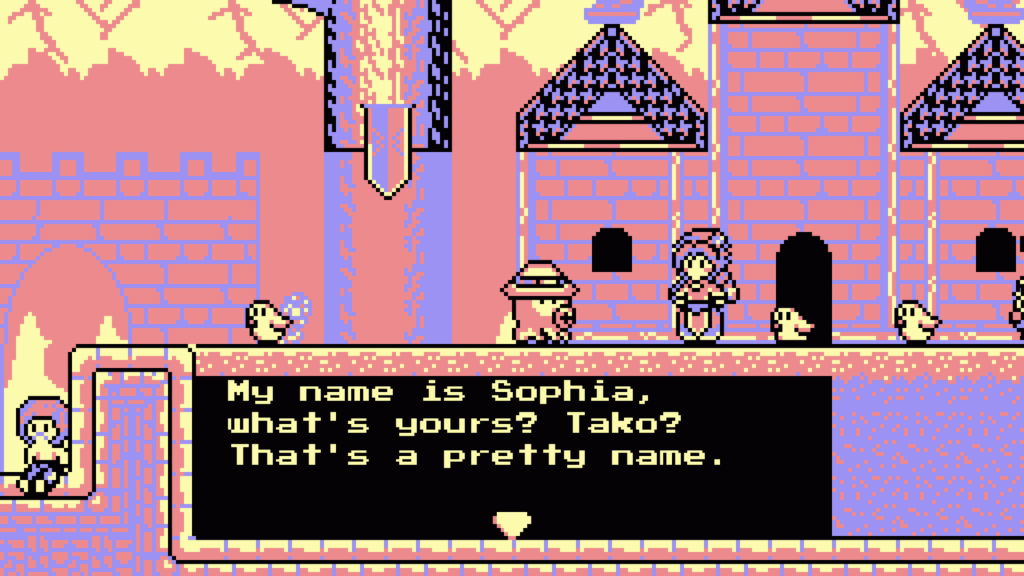 All in all, I enjoyed my time with Save me Mr Tako. It evokes a style and period of games that just isn’t as focused on as, say, the NES or Super Nintendo. It has its shortcomings, but this is still a game worth giving a chance to. Fans of Nintendo’s most famous, classic handheld system need look no further than this seafood special of a game. Full of fun and heart, Tasukete Tako-san makes for a worthwhile tribute to its inspiration that manages to stand on its own eight legs thanks most of all to its story and aesthetic. With a little overall fine-tuning and adjustments, this could be a must-play — but as a well-crafted homage, it still stays afloat. 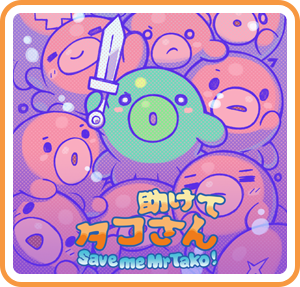