Conventional wisdom holds that all the inspired and artistic games are made by little indie teams with a vision, while the AAA studios pump out highly polished yet safer titles on a annual or biannual basis in their never ending quest to make All The Money. So when Ubisoft Montreal — the force behind open-world behemoths Far Cry, Assassin’s Creed, and Watch Dogs — instead makes a game that is small, focused, and with a soul oozing from its every pore, then it’s worth sitting up and taking notice.

Child of Light was initially released over four years ago on a number of platforms, including the Wii U, and now it makes its way to Switch with some small perks in an Ultimate Edition. And if you missed out on it the first time like I did, then you should absolutely consider giving it a look this go around, because Child of Light truly does feel like a game with a heart, a passion project with personality.

A princess esteemed in a land of dreams

Child of Light follows the eloquent and ethereal tale of an Austrian princess named Aurora. After being stricken with illness, she passes away tragically in her sleep, causing her father to fall into despair. She then wakes up in a mysterious land known as Lemuria, where the Queen of the Night, Umbra, has stolen the sun, moon, and stars from the sky after vanquishing the kingdom’s true ruler, the Queen of the Light. With the firefly Igniculus by her side, Aurora sets out to recover the missing celestial bodies and return home to her ailed father. 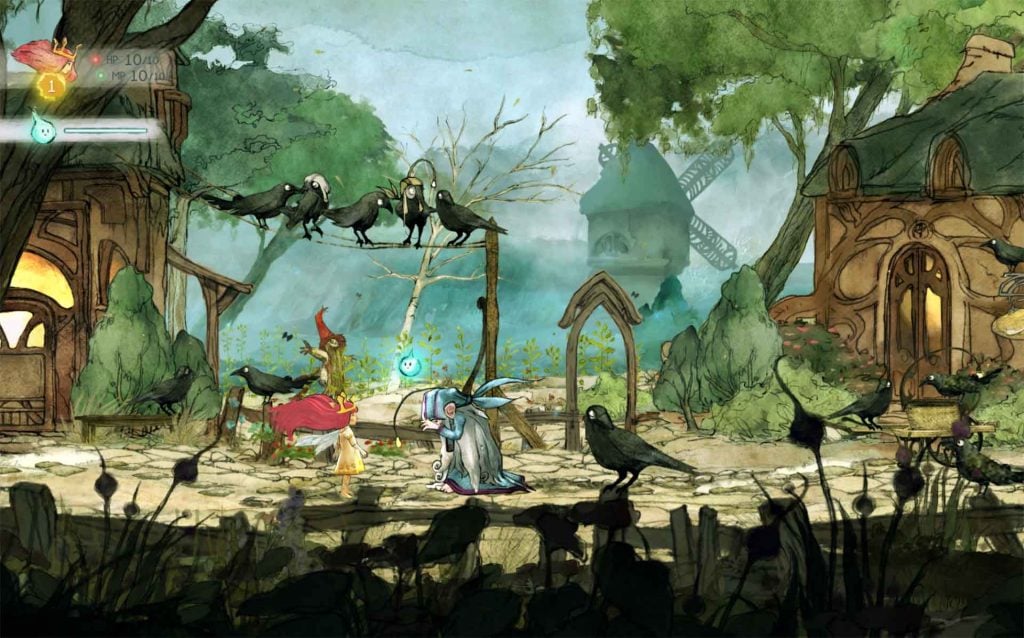 The game’s plot adopts the style and trappings of a fairy tale in every aspect of its storytelling. From the classic hero’s journey to find an eclectic band of allies to accompany Aurora, to exploring a land where mysticism and wonder are more important than logic or believability, Child of Light crafts a narrative that evokes the fables of youth without directly aping any of them. The characters are colorful and whimsical, the scenarios are rich and varied, and the world is mysterious and inviting.

Of course, there is an extra element of this good time, which is — as you might expect — rhymes! Every line (save a few) always follows poetic meter, rhyming in twos. It’s enough to make Grunty the Witch seem downright blunt, and at times it does feel like a bit of a stunt. Yet I can’t help but deny the stylistic charm, and in the grand scheme of things, what’s the harm? While your own mileage may vary, I personally found the writing quite merry.

Art so utterly quaint, and so rich in colorful paints

The visual flair of Child of Light is another highlight, as the rich watercolor backgrounds form a beautifully mesmerizing world to explore. Environments are ambient and airy, inspiring laid-back trips through the air as you explore the side-scrolling wonderland. Denizens and monsters of Lemuria are animated like paper dolls, contributing to the fairy tale motif with a keen eye for stylization. While I was iffy on Aurora being a 3D model in a 2D world at first, it’s ultimately a stylistic choice with payoff (especially since her hair is so well animated). 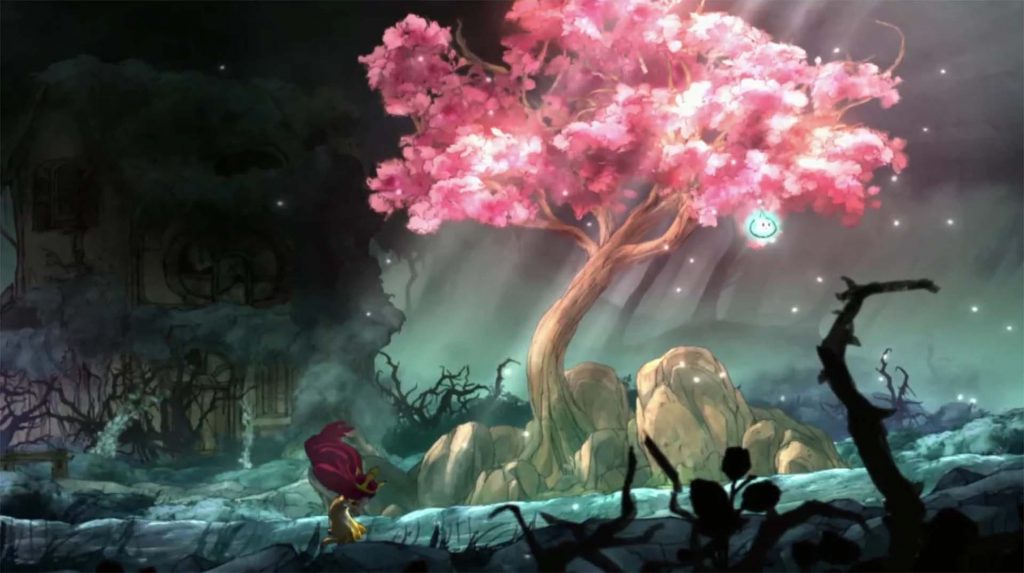 The character designs are also splendiferous, from the NPCs that are inspired from a number of fantasy species like gnomes and beastfolk to your party members that are fashioned after said species. You’ve got jesters, a golem, a rat archer, and a whole host more that make for a multifaceted band of misfits. Aurora’s design in particular is striking, what with her oversized hairdo and bright pink-and-gold color scheme.

When it comes to the music, my opinion is a little more tempered. Overworld tracks are quiet and somber, which I find fitting, but a lot of the battle themes felt a little forgettable. It managed to turn this around towards the end with some more intense orchestral pieces, so it wasn’t a complete wash by any means, but it stands out a little less strong stylistically than the writing and art. It’s still far from reprehensible, so it’s less of a negative and more of a neutral point.

For what is right, stand up and fight

Child of Light’s gameplay subsists of an interesting mix of platforming exploration and RPG battles, with more emphasis on the latter. Battles consist of an ATB style system where every character has a wind-up before they can take an action — if hit before they can execute, then they lose said action. As such, battles focus on taking down your enemies while being mindful of everybody’s position on the timeline, making sure to disable foes while not being stifled yourself. 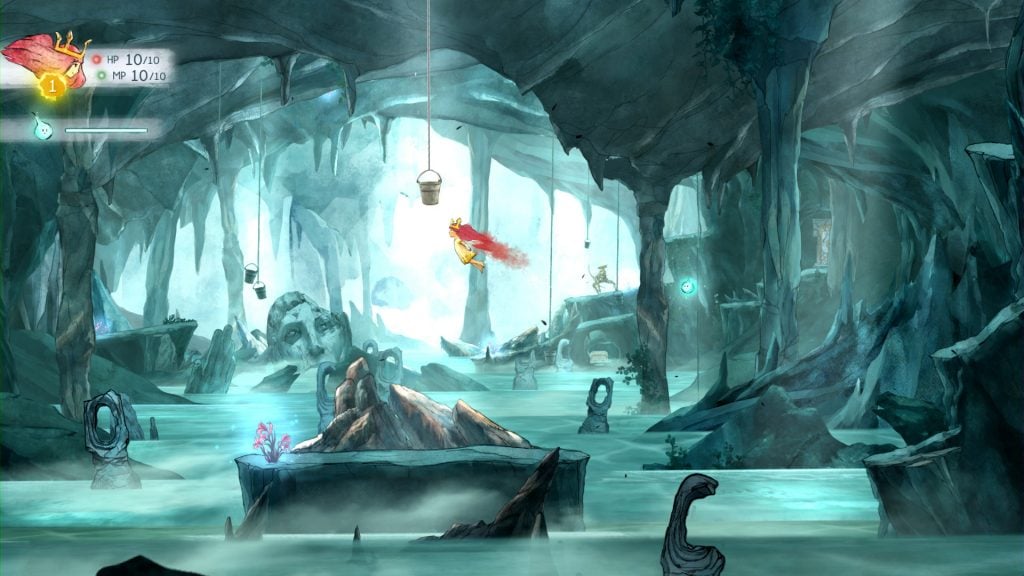 You can use only two party members at a time, but you can swap out and move again immediately (at least on Casual mode, which is what I played), which helps mitigate your large party size. Like any good RPG, your different characters serve different roles — one’s a healer, another focuses on elemental magic, another is focused on buffs/debuffs, and so on. So adapting to the enemy and situation is imperative.

The most interesting tool in your arsenal is Igniculus, who serves two potential roles: weak healing, or slowing down foes’ actions. The latter in particular ends up forming the crux of your strategy, as you have to determine who and when to hamper. Use him properly, and you’ll gimp your foes time after time; do so incorrectly, and you’ll be the one who can never commit an action. He’s definitely the part that makes the timeline system work as well as it does, and even on Casual I felt like he made a big impact. 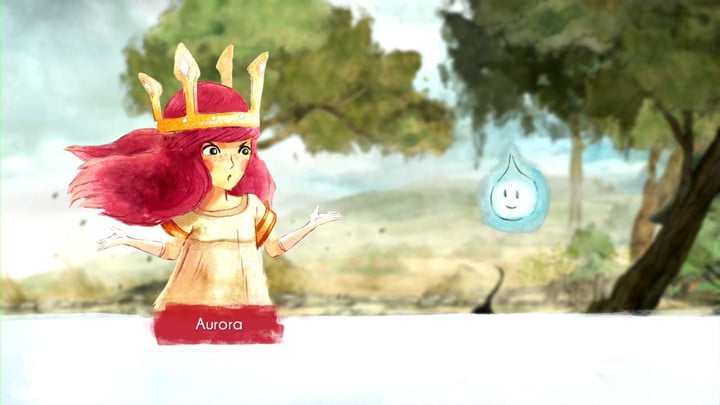 For the first hour or two, I’ll admit that Child of Light is at its weaker end. It starts off pretty slow in both exploration and battle, and takes a while to accelerate. But you soon pick up the ability to fly, which really improves going around on the map, and each time you get a party member the options you have expand. By the end, the battles are really satisfying and engaging to play, more than enough to make up for the sluggish beginning — especially the bosses, which each have some tricky maneuvers that you’ll have to combat.

And as I hail, you should play this tale

There’s a couple of smaller bugbears that keep Child of Light from being truly excellent. The game’s crafting system was mildly interesting, but didn’t really feel essential or notable. (Again, I was playing on the easier difficulty, so it might be more vital on Hard.) The climax comes a bit quickly, like there’s a chunk of the third act missing right before the end. And while I think the game is a good length, when looking at the overall picture I felt like the whole thing was a bit crunched at points, and could’ve been expanded upon further.

Yet that aside, there’s no denying that Child of Light is exceptional — a work of a big budget studio that showcases a flair for something more artistic. I wish that other AAA studios would take the time to create a game like this — something a bit rougher around the edges, something that isn’t a hundred million hours long, but also something with a voice, and personality, and a sense that the people working on it love and care for the product they’re making.

Child of Light may be a flighty little footnote in the grand history of Ubisoft, but to me it’s one of their most memorable experiences — a game that dazzles and shines in the sky of game development like a bright, effulgent star. It’s not engineered. It’s not market-tested. And that’s what makes it so luminous. 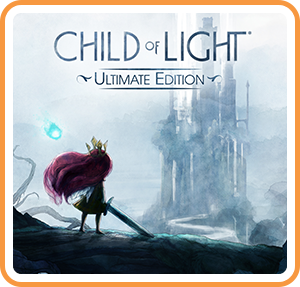