Luigi’s Mansion in 3D? It’s older than you think!

In just a few short weeks, you’ll be able to experience Luigi’s original mansion adventure on the 3DS. When the port was announced back in March, I was jumping for joy for a few reasons. The most obvious is that Luigi’s Mansion is my favorite game of all time, but the most exciting reason is that I realized that Luigi’s Mansion was finally going to be playable in 3D, the way it was originally intended.

It’s a not-so-hidden secret that the late Satoru Iwata would mention from time to time, especially when promoting the 3DS when it was still fresh: the GameCube was developed with 3D capable circuitry inside, allowing it to run games in stereoscopic 3D, and Nintendo actually had one game fully working with the capability. That 3D-enabled game was the GCN launch title Luigi’s Mansion. Mentioned in an Iwata Asks column, it was revealed that the technology would have come as a screen attachment for the GameCube, and that that particular build of Luigi’s Mansion “would jump out at you pretty nicely.” 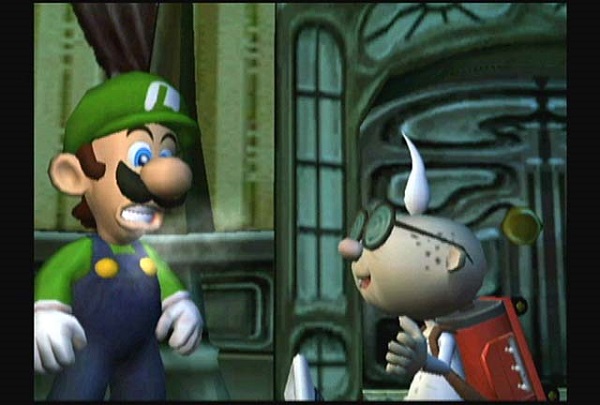 Of course, this peripheral never saw the light of day, and the Luigi’s ghostly foes were trapped in TV screens for the next 12 years, until the release of Luigi’s Mansion: Dark Moon on the 3DS. According to Mr. Iwata, the GameCube’s 3D screen was never released due to the extremely high cost of the liquid crystal display required to produce it, stating that it couldn’t be done without “selling it far above the price of the Nintendo GameCube.” Nintendo kept experimenting though, and had another stereoscopic screen prototype fitted to the Game Boy Advance SP — the trouble this time was that the screen didn’t have a high enough resolution to display the 3D nicely, and so they waited. Years later their experimentation paid off when the 3DS launched with full 3D available for almost every game released on the system, and now we’ve come full circle with the 3DS re-release of the original Luigi’s Mansion, the way that Mr. Iwata and his colleagues had always intended.

Ever since reading that Iwata Asks column a few years ago, I’ve dreamed of the day that I can explore the mansion with my trusty Poltergust in 3D, and I’m excited to shuffle through the dusty halls of Luigi’s Mansion in full and beautiful 3D when the mansion’s doors open on Nintendo 3DS on October 12th.

You can pre-order your own copy of Luigi’s Mansion for 3DS on Amazon today.