Warfare is a common theme in video games, with large scale battles and the chance for heroics well suited to them. Where I’ve always thought it shined most though is in turn-based strategy games, with Fire Emblem standing proudly as a favorite. This is largely due to the interplay of its fleshed out characters with the grid based gameplay, and while I wouldn’t trade that for the world, sometimes you just want something a little different.

Enter Valkyria Chronicles, released ten years ago on the PlayStation 3. The game retold World War II conflicts in a mostly grounded (though with fantastical elements and concepts) version of what can only be called anime Europe, with a unique style of strategic gameplay. Sega’s kept the series alive with some sequels, but only the first game really made an impact in America. Now a new operation is finally ready to begin, with Valkyria Chronicles 4 set to deploy on Switch. It carries the legacy of its oldest predecessor well, not just becoming the worthy followup it always deserved, but standing as a medal-worthy game in its own right.

Taking place in the same time period as the original Valkyria’s Second Europan War (but on a different front and with an all new story to tell), VC4 introduces itself to you by framing its story via the diary of its main character. It places you in command of the Atlantic Federation’s Squad E, a group of soldiers lead by the compassionate and dedicated Claude Wallace, the diary’s author. Your squad will grow over the course of the game, but the core consists of four childhood friends in particular: Claude himself manning the squad’s tank (called the Hafen), hotheaded shocktrooper Raz, collected yet blunt sniper Kai Schulen, and science officer/grenadier Riley Miller. 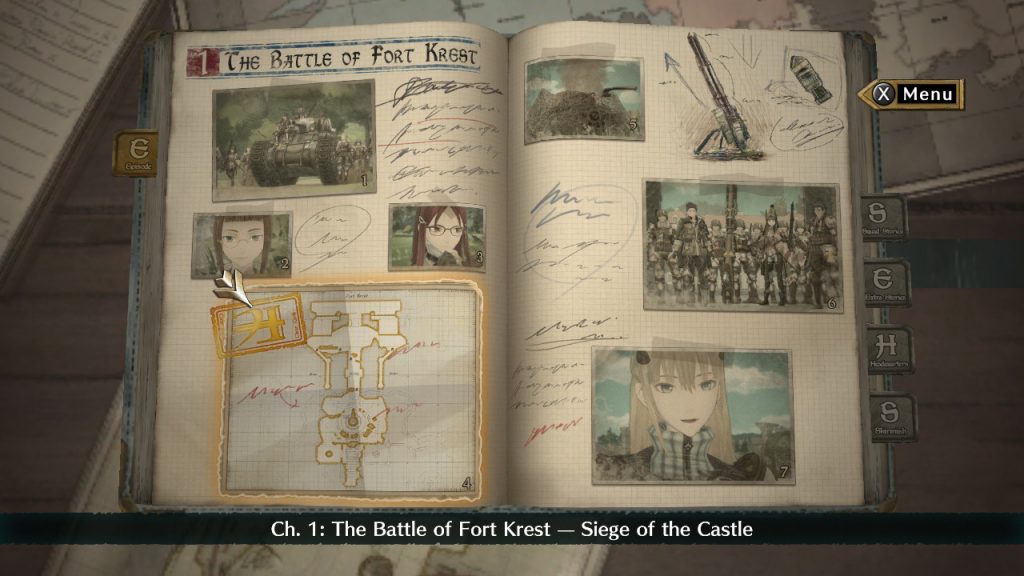 Their dynamics and personalities are at the heart of nearly every corner of the game, standing out as a likable quartet who we slowly learn more about and see grow through victories, losses, and the overwhelming presence of war. It does take a few chapters for that to shine through, but once it did I couldn’t help but feel like a part of the team too. Add in some recurring secondary characters and commanding officers, as well as antagonists from the opposing Imperial Alliance (including an overly persistent tank commander and one of the superhumanly powerful and titular Valkyria), and you’ve got plenty to see over the course of the story.

They aren’t the only ones who you’ll see and learn about though. Valkyria Chronicles as a series gives each of your deployable squadmates names, personalities, and friendships that aren’t just flavor but actual gameplay features. Maybe your engineer is really into tanks, leading to a potential buff when he’s near them, while a sniper has a chance of getting distracted by wild animals due to his love of nature. It’s just enough to help you pick out your favorites and think about where they should go — these potential activations never got in the way of overall sound tactics. 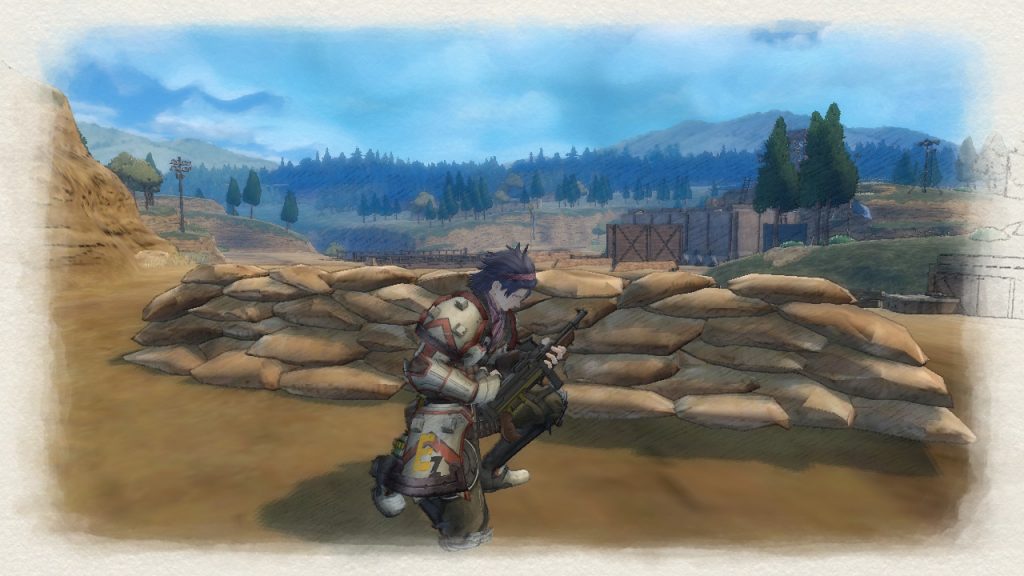 Units may even perform better when positioned with squadmates they get along with, which over time will unlock side stories starring these characters. I appreciated the interplay of character and gameplay, as well as how it might nudge players to certain effective (yet fully optional, you are the commander after all) lineups. Just be warned: if you’re not careful, most of these characters, their dreams, and aspirations can end up dead on the battlefield, permanently.

BLiTZ with the best of ‘em

Like other games in the series, Valkyria Chronicles 4 utilizes the BLiTZ Battle System to offer up a unique brand and brand of strategy and action gameplay. For those unfamiliar, you’ll begin operations with an overhead view of the map and a set number of what are called Command Points to spend. These allow you to take direct control of your squad member of choice, shifting the perspective to third person and giving you a new view of the battlefield. Suddenly, things like high ground, line of sight, and enemy troop placement become more tangible as you move into position with bullets and mortars flying by.

Movement is restricted by Action Points, represented by a bar along the bottom of the screen as you move a character. While in control, you can perform a task such as attacking an enemy or healing yourself; and as long as you have AP, you can move freely on the battlefield before heading back to the overhead map view. You can use multiple CP to keep pushing with one unit, though you get less and less AP each time — not to mention, the threat of running out of ammo and being left out in the open. 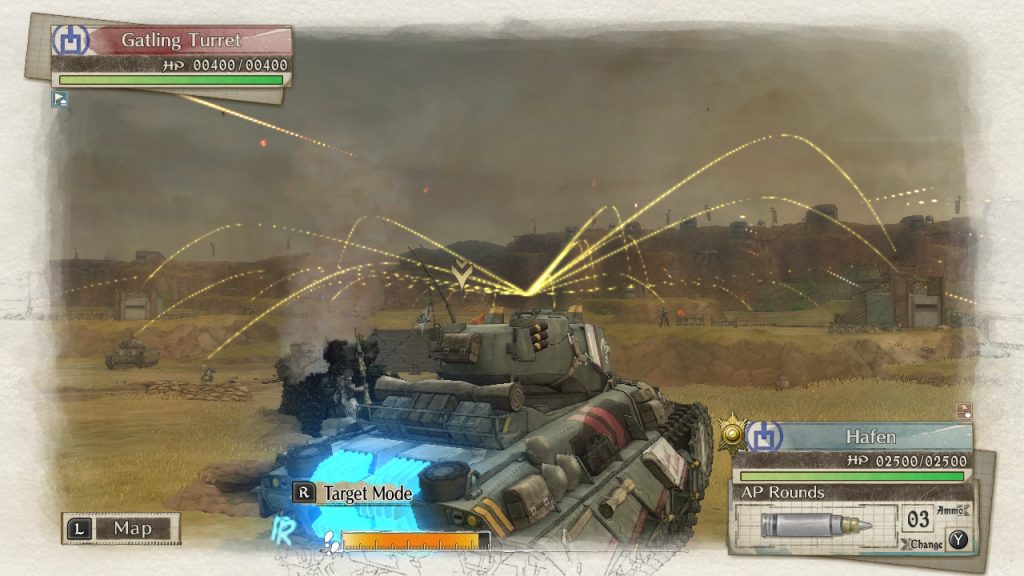 This altogether makes for a fantastic and unique gameplay. While carryovers from all my previous hours with strategy games played into decision making, overall strategies, and character placement, this is its own war machine and requires you fall in line to its chains of command, so to speak. Troop types offer up classes that can complement each other as well, such as the scout class (having greater vision and high amounts of AP by default) flanking to get a read on enemy placement before having your more powerful sniper or shocktroopers handle the full offense.

The new to VC4 grenadier class also opens up some interesting strategies and firepower, able to stay relatively safe and out of the way to fire off supporting barrages as long as a different squad member has direct sight of an enemy. They end up being essential, or at least highly useful, for certain situations that the game likes to put you in and serve as both potent offense and support when their interception fire comes through. You’ll build up your ranks and arsenal over time to command multiple tanks, different class specific firearms, and even bring out some especially big guns to help ensure that every operation’s a success.

While the BLiTZ system is ingenious and offers a great deal of variety in how you approach situations, actually opening fire does boil down to chance in some ways. You might have your aim set on an enemy, but if you’re using a low range or accuracy weapon, it could end up being a wasted shot. It’s also sometimes difficult to predict enemy actions or reinforcements, for better or worse, putting things in the hands of fate. 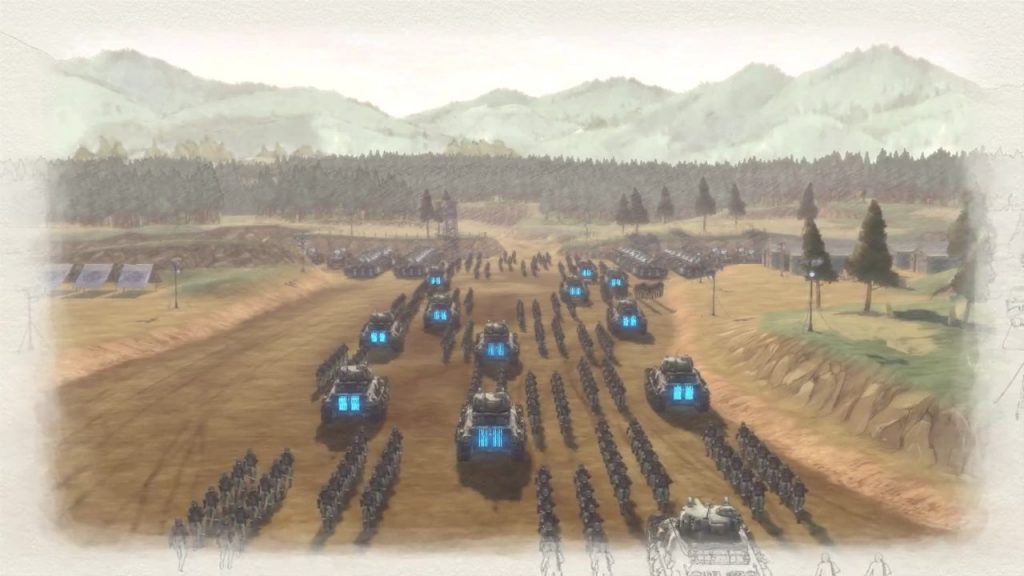 The right Order makes all the difference

This can be compensated in some ways though with Orders, issuable by Claude and providing clutch buffs and effects at the cost of CP. Issuing these properly can make a world of difference and can make for some dramatic moments. Speaking of, the tension of the varied objectives the game throws across its dozens of unique maps and operations is painfully and delightfully real, making victories feel earned and defeats devastating.

Sometimes though, the game does dip in quality, especially on more occupied and active maps. With hails of gunfire, active flames, or weather effects, things can get busy — and in handheld mode, the game occasionally slowed down for me. Not enough to throw of my actions, and with the inherently slower pace of the game, a little stutter isn’t enough to hold it back. You just might want to consider playing some of the more dynamic scenarios docked for a smoother experience. 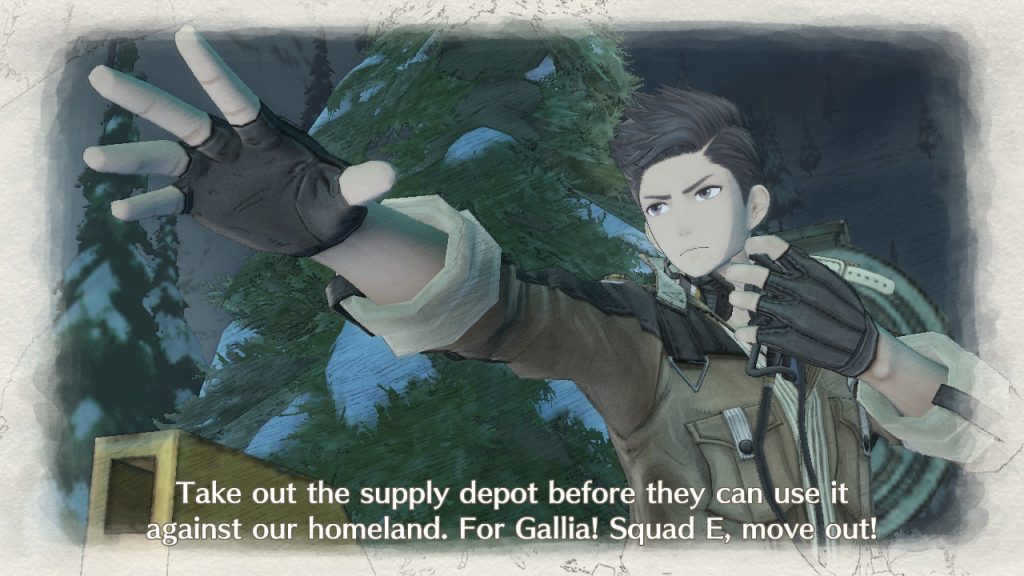 No matter the map, the game is gorgeous in its own way thanks to its CANVAS engine. Giving the world and characters a unique, stylized look that evokes hand drawn images and watercolor palettes enhances the whole game and suits its environments. Open meadows and burning basecamps are equally gorgeous, but it’s when winter sets in and operations move to mountain passes, snowy rail yards, and more that VC4 sets itself apart from its predecessors and becomes a true sight to behold.

Flipping through pages back at base

The game sets into a fairly familiar loop right away: you’ll be treated to cutscenes and story elements; you’ll take some time to use resources to level up and equip your squad, then take part in an operation before heading back into the story. This strategy RPG familiarity makes it no less engaging, though there are times when the visual novel-esque story really takes over and imbalances things. You may be watching through nearly six story vignettes before getting back to the gameplay itself at times, and while that’s an extreme example, it might make the early game and some key turning points drag on a bit if you’re planning to binge VC4. 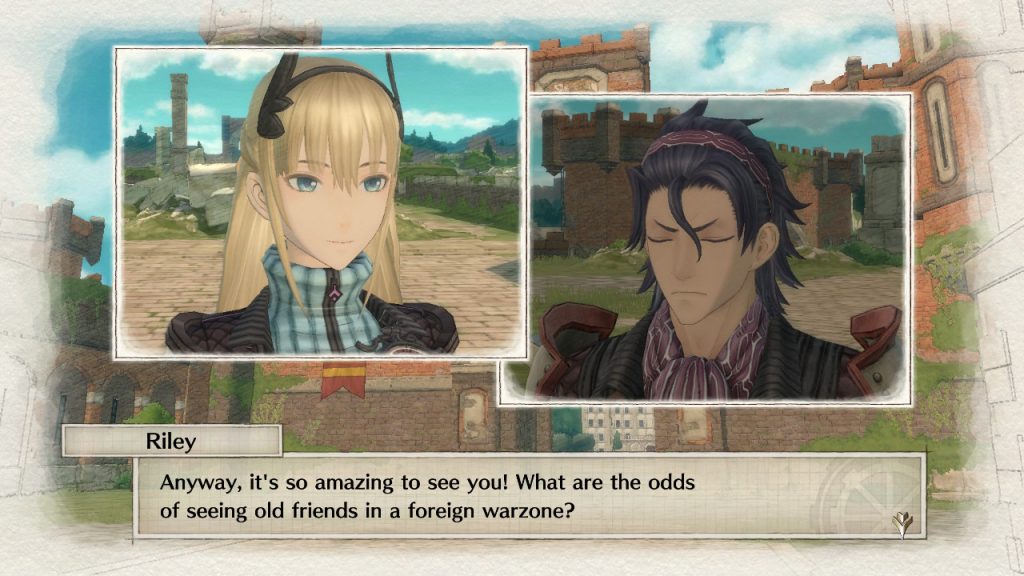 Still, the narrative does draw you in and has a knack for switching between lighthearted, anime-esque scenarios and heavy subject matter — like death, personal failures, PTSD, and doing all one can to carry that weight alongside duty and purpose. Mind you, it isn’t overwhelming or the most efficacious, but it never phones its messages or intents in either. The game, like its characters, is earnest and dedicated to its mission.

As far as forming, improving, and kitting out your squad, Valkyria Chronicles handles its large playable cast well by letting you pour experience as you like into your character classes rather than individual characters. Doing so gives you access to additional passive and active skills, while time at R&D will give access to branching weapon trees and vehicle improvements. Normally, I end up more focused on in-battle decisions than pre-battle outfitting, but Valkyria managed to keep things user-friendly even when my squad grew well past its initial lineup of recruits. 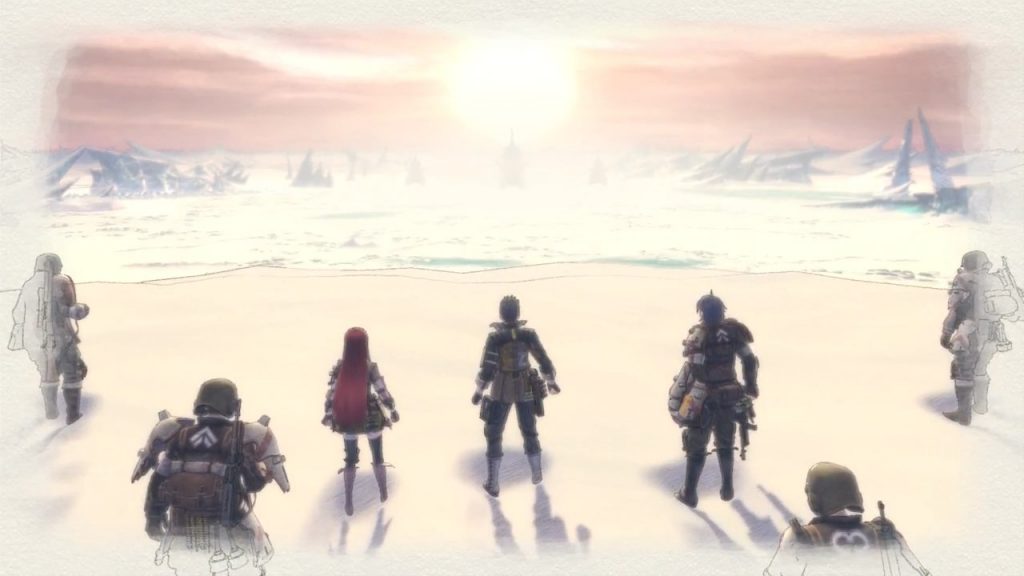 Any major drawbacks of the game are more down to personal taste and facets of its genre. Even with its European inspired world, these are still essentially anime characters, with some of the lesser squadmates falling into cliché character types. The main cast isn’t fully immune to this at times, but they all receive enough attention to come into their own. Likewise, this isn’t a game you can play through in quick bursts, with maps taking plenty of time to play through, not just due to their turn-based nature, but certain unskippable elements that add up over the course of a playthrough. Nothing to worry about if you’re a fan of (or at least familiar with) the genre, but even if the game is a mix of the two, it’s definitely more strategy than action.

If anything about Valkyria bothered me, I’d have to say it was its “grade” system. After an operation, you’re ranked to determine your post-battle rewards, and while this isn’t inherently bad, most of the weight seemed to go to turn count. This means the game wants you to play quicker for maximum benefits, which leads to using more experimental or methodical strategies that are subtly discouraged. Mind you, you still have full freedom to play your way, so long as you don’t mind the game marking you down because what you thought was a thorough and well-thought plan simply wasn’t played out quickly enough.

It will be done

Offering dozens of maps and hours upon hours of gameplay, this one can definitely keep you busy. Valkyria Chronicles 4 draws you into its world and characters, keeping you firmly on the front lines of its all-encompassing war while never losing sight of its more grounded ideals and humanity. Fully equipped to be a unique, involved, and visually exquisite strategy game, there’s hardly anything holding it back from victory. Pacing can be an issue with some of its chapters, and it isn’t subtle about its themes — but this war-worn diary rightfully stands as a commended and recommended addition in the Switch library. 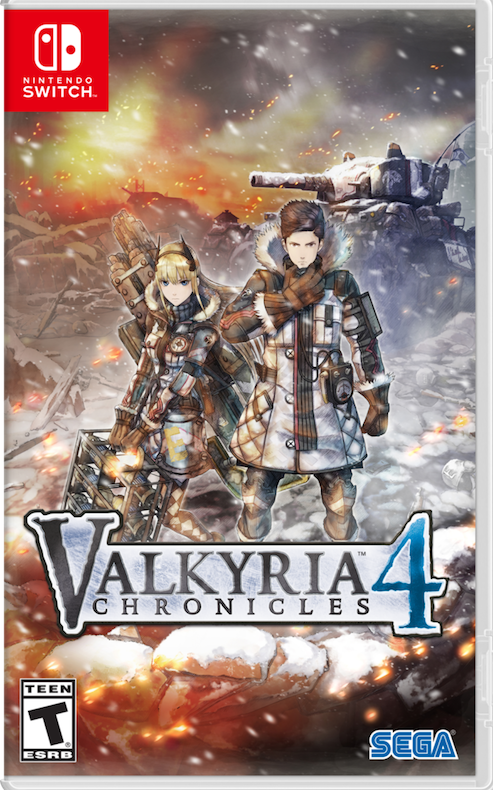