In the months since I finished my review of Xenoblade Chronicles 2 — which was almost entirely positive — I’ve felt myself flip-flop internally on my own judgment of the game. While I still enjoyed it immensely, I began to doubt myself: Was I being too lenient on it, despite its many little flaws? Was my perception of those flaws blown up just because I loved the first Xenoblade so much? These questions gnawed at me, and made me wonder if I had been too bullish on an experience that was great but rough around the edges.

Enter the game’s most expansive DLC: Torna ~ The Golden Country, a prequel storyline following the Aegis War that takes place centuries before the adventure of Rex & co. And upon playing it, I remembered just how much I legitimately loved Xenoblade 2… and how even so, I can’t quite ignore some of its warts.

Torna is less focused on one central protagonist and more on an ensemble cast. It begins with the mercenary Lora and her Blade, Jin, struggling to make a little bit of difference as the world of Alrest struggles to uphold itself against the threat of the tyrannical Aegis named Malos. A chance encounter with a prince of Torna, Addam, and his own Aegis — Mythra — sets the group off on a classic quest: to defeat Malos and bring peace to Alrest. With the help of Emperor Hugo of Mor Ardain, the party travels across all of Torna to aid citizens and bring an end to the war. 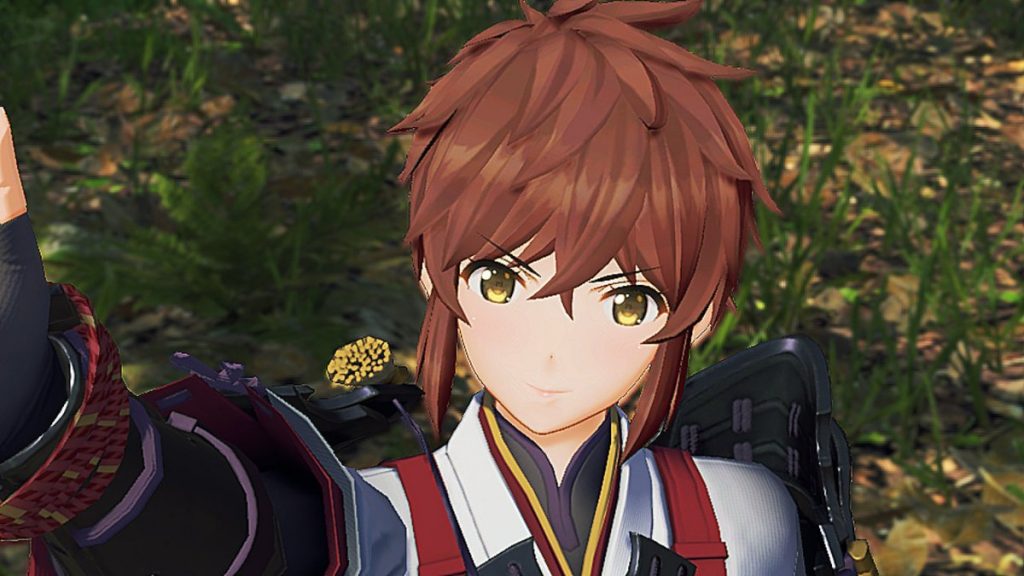 In many ways, the story of Torna is similar in style to that of the main game, but a few smaller changes end up aiding it. It’s more compact in terms of runtime and events, allowing for more fleshed out interactions with the country. Its tone bends towards the more serious, with most lighthearted moments being confined to smaller side scenes. And while the unending scourge of Anime Writing is impossible to expunge completely from its DNA, it is reduced somewhat. And I’ll take what I can.

I would say that I liked the general cast of Xenoblade 2 a lot — but Torna’s proves even better. Lora — previously a mere tragic flashback waif — provides a subtle mixture of spunk, gentleness, and quietude that makes her a solid lead. After being talked up for the entirety of the main game’s story, Addam ends up being charismatic and lovable to a fault, and his voice has enough gumption to give a man a mustache. Hugo and the assortment of Blade allies make for fine supporting characters, each with their own little times to shine. The only one I wasn’t keen on was Mythra, who I found inconsistently written, but even then she had moments towards the end when I actually liked what the game was doing with her — a phrase I honestly thought I would never type. The only real knock is the lack of Heart-to-Hearts, which would’ve elevated the cast to even greater heights. 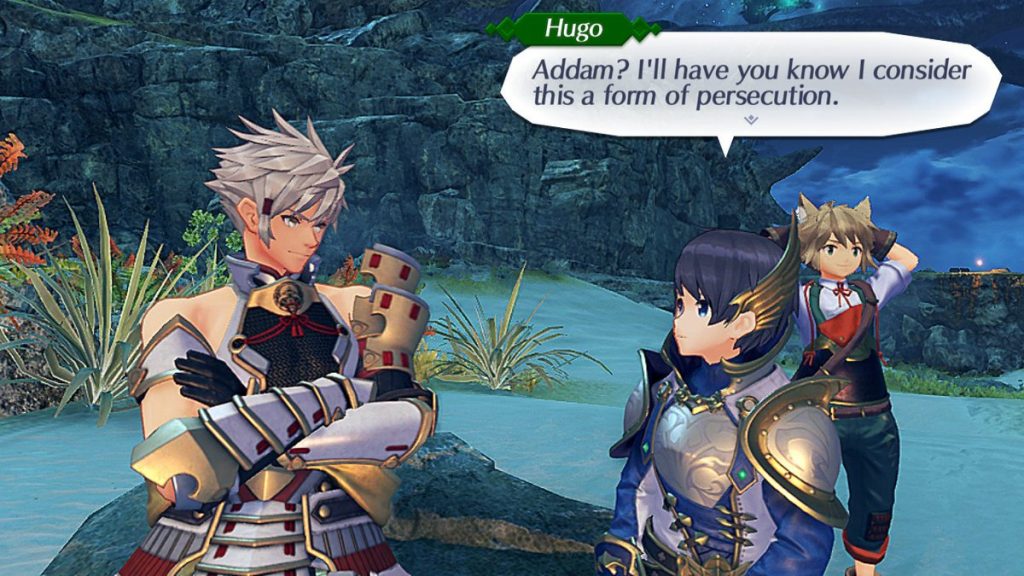 However, special mention must go to the character who ends up being the core of the expansion (if not the entire damn game): Jin. He was already one of the best parts of the base experience, acting as a superbly written fallen hero and tragic figure, and Torna only adds to his already complex dimensions, showing a portrait of a man whom the player knows will have a downfall. Not to mention his chemistry with Lora is much more fleshed out and endearing than Rex’s and Pyra’s (which remains one of my sticking points with the main game). The intricacies of his character are too much to go into detail on, but he may be one of the best characters in the series, or even JRPGs as a whole — a villain who you can truly feel is the hero of his own story.

Gameplay-wise, Torna proves to be more of a unique twist on XBC2’s combat than anything crazy-new, but it’s just the right blend of familiarity and newness. Instead of Drivers swapping between equipped Blades, you swap control of characters entirely — between Lora and Jin, Addam and Mythra, etc. Swapping not only recharges your Arts but also can Break/Topple/Launch/Smash the opponent based on who’s switching. At two Blades per team, you’ll switch between a trio of characters in any given fight to dish out the typical combat — cancels, combos, and fusions galore.

The lack of the expansive gacha system or more extensive squad customization (teams are fixed; you can’t swap members) is perfect for the size of the expansion — focusing on making the most of the tools you’re dealt rather than experimenting with a wide array of them. You’re still allocated enough tweakability (such as being able to change your Driver’s elements) to create strategy, but the limited options make each of your characters feel a bit more unique. And, y’know, no gacha BS is unequivocally great. 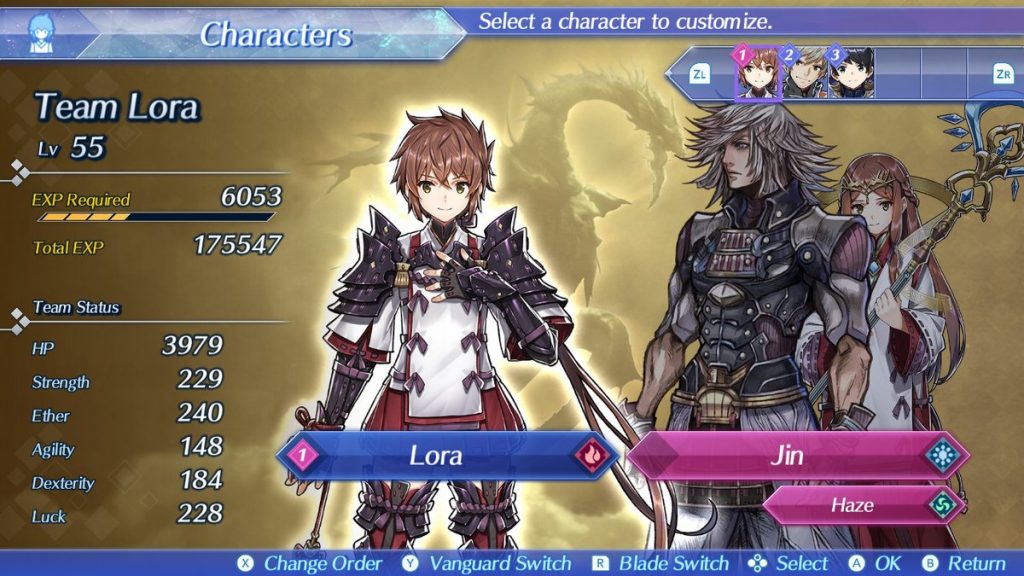 A nice little new addition is crafting. With the assortment of materials you harvest around Alrest, you can create items. Most are meant to fill your pouches and provide temporary stat buffs — food, books, perfume, and charms — but there’s some that will offer more permanent upgrades. It’s not a giant change, but it makes for a more involved experience than just buying stuff from shops. Plus, the display for it is by far the most aesthetically pleasing design in the whole game.

In terms of environments to explore, there are only two Titans here: a more rural, less developed version of Gormott, and the titular Torna, which is so expansive that it’s divided into several regions of their own bountiful size. They’re just as gorgeous and grand as you’d expect from a Monolith Soft game — from a vast desert to more subdued woodlands to several vistas you can look out from and just gape in awe. And, of course, the music is downright splendid — I don’t know who on the sound team decided that this DLC needed a soundtrack themed around smooth jazz, but Architect bless them, because there are some bonafide bops.

Won’t you be my neighbor?

One of the more surprisingly substantial aspects of the expansion — to the point where I’d almost declare it the core feature — is known as Community. Almost every single NPC you encounter is recorded, and eventually upon helping them or someone close to them with a quest, they’ll be added to your Community. Get enough Community members, and you’ll unlock more quests. It provides a more snazzy way to witness the effects of your side quests on the world, and the NPCs’ relationships with one another. 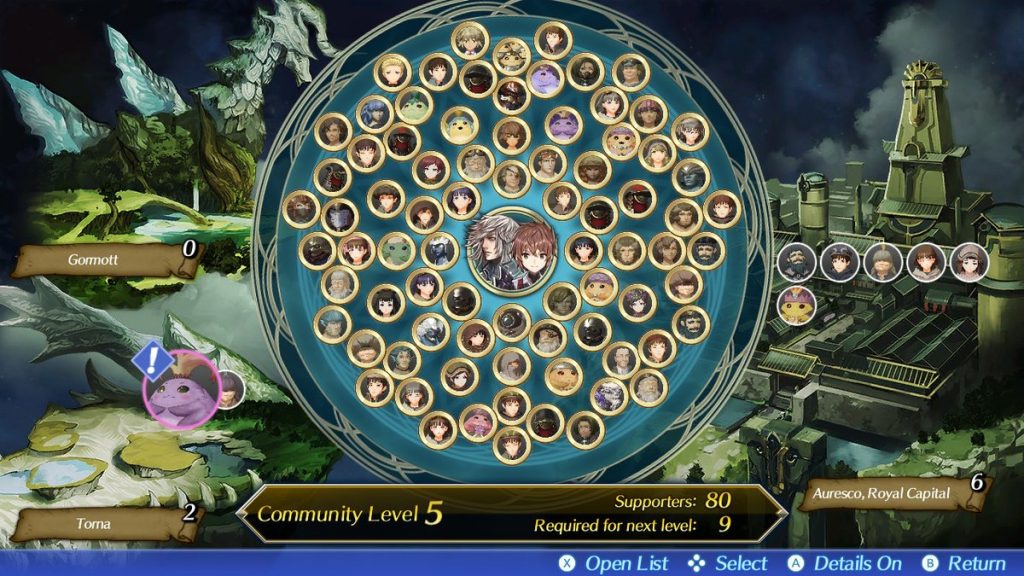 If that sounds familiar, it’s because this is essentially an altered version of XBC1’s affinity chart, which is great, because that was one of the cut features I was saddest about in the base game. Tracking the NPCs and how their relationships change really makes the world feel more involved and alive, and completing quests really makes you feel like Lora and Addam’s efforts are loved and rewarded. I would say it’s slightly inferior to its predecessor by way of not showing character relationships in a web (and by also being much clunkier) but the core appeal is there, and it made the already great side quests that much better.

There is something many fans have taken ire with, however: the so-dubbed “Community Gate.” At a certain point in the expansion (basically right before the end), the game tasks you with getting up to Community Level 4 before letting you proceed, which basically necessitates doing 90% of the side quests available at that point. As somebody who was doing all side quests at the first available opportunity, I didn’t find it bothersome (and I actually liked how it made you feel attached to the world before… well, it’s a prequel, you know what happens, right?), but I understand why many take issue with it. If you’re the type to blaze through the main story first and foremost, you may not be as hot on this one.

A moment of eternity

Torna manages to both avoid and indulge some common prequel (and standalone expansion) problems. Not everything is tied up neatly in knot by the end for the main game, but certain details feel just a bit too lacking for my taste — a smidge more closure on certain issues would’ve been great, though I appreciate the ambiguity on others. They left out some main game twists for first-timers but still left a good handful or two in; while certain scenes were more impactful having played XBC2 first, I can think of others within the main campaign that would be much more meaningful if you played Torna beforehand. And while there were some clever bits of foreshadowing here and there, there were also a couple cloying calls forward that felt way too heavy-handed. 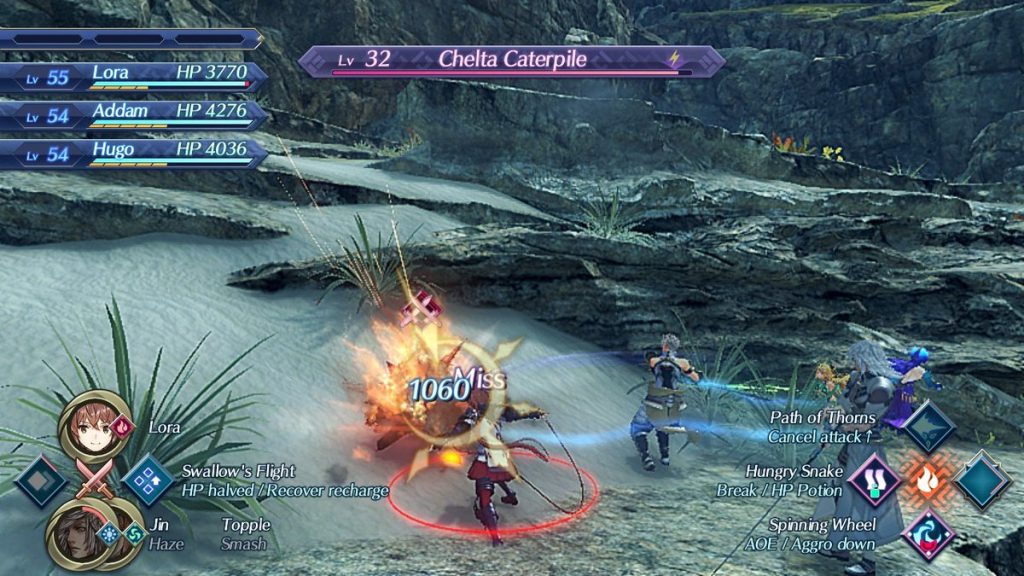 Much like the main game, Torna has both a lot of little detriments and little benefits. The voice acting is inconsistent, with some truly great deliveries and others that baffle. Line by line writing occasionally feels like it needed another editing pass or two. And the game’s humor could veer between “tropey and predictable” and “hey, that was actually pretty funny.” But the choreography and cinematography remain impeccable for the genre, world design remains creative, the battle dialogue is still intensely charming and memorable, and nothing quite matches the satisfaction of pulling of a Smash/Level 3 Blade Combo simultaneously.

I think what made me appreciate Torna so much was that it felt like a middle ground between the first Xenoblade and the second — more serious and reserved in tone (most of the time), with the improved battle flow and combos that XBC2 nailed. While it still doesn’t match up to Shulk’s journey in my heart, I think Torna has allowed me to stifle my need to compare the two, and appreciate 2 for what it is.

At just over 20 hours of content (with some side quests left), Torna is the filet mignon to the base game’s rich, fatty steak. If you’re a Xenoblade fan, then it’s an absolute pick-up. If you’re new to 2, then it can be a great starting point if you’re unsure of your commitment to a 100 hour experience, as it’s a wonderful sliver of what the full game offers. And ultimately, I think I’ll look back at it even more favorably than the main questline. Just like the game it’s an addendum to, Torna ~ The Golden Country is an unpolished gem: an experience with rough edges that dazzles in spite of them all. 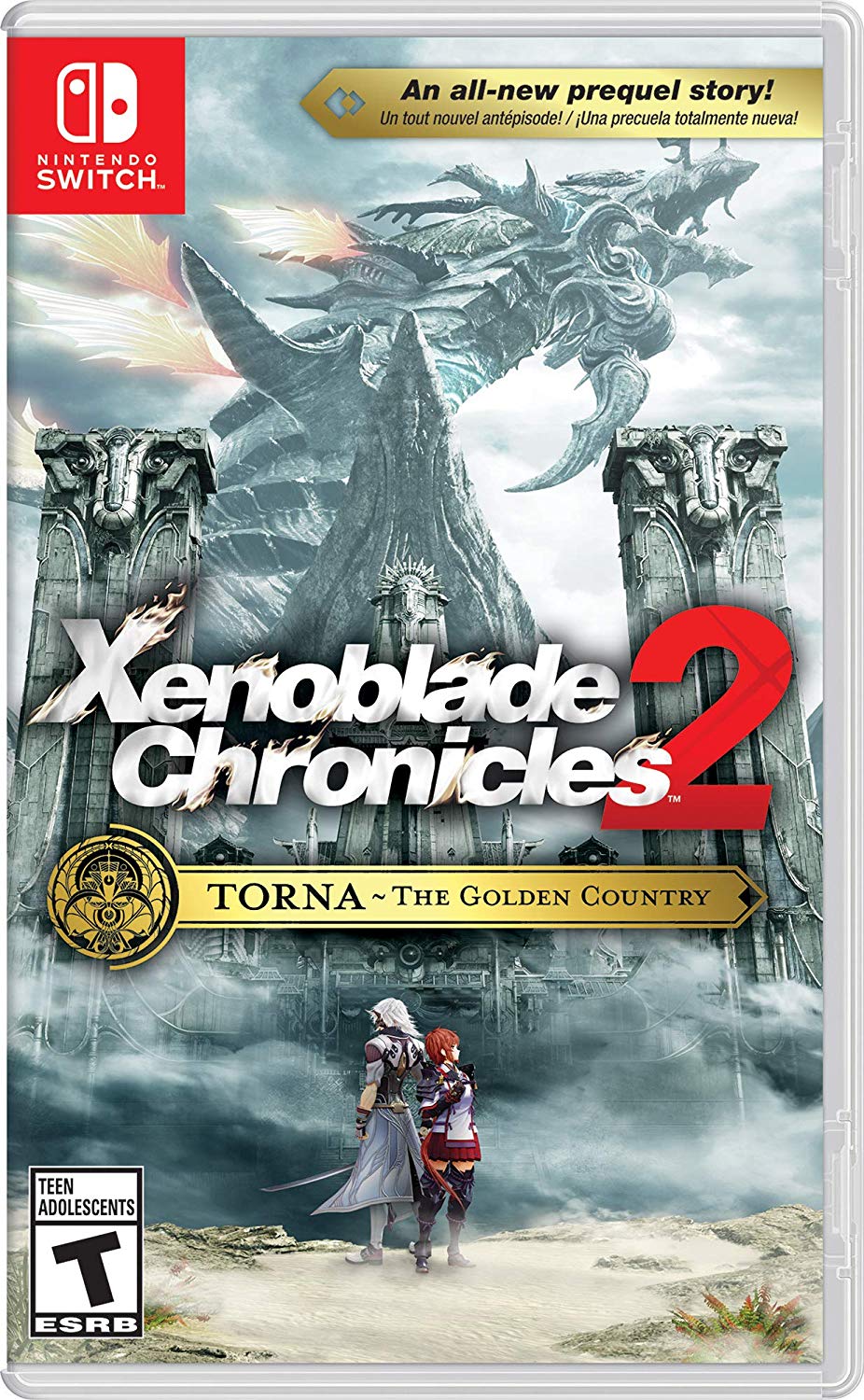