The number of fighting games available for Switch has been growing at a great and steady rate. Big names like Capcom, Arc System Works, and soon Bandai Namco are complemented by plenty of indie efforts and first-time forays, like Nicalis’ Blade Strangers. Now a new challenger enters to similarly bridge this gap, bringing together NISA and fighting game legend SNK to offer up an all female fighter that sets its sights firmly over the top.

On paper I love the idea of SNK Heroines: Tag Team Frenzy’s cast, and some of its systems seemed interesting, even with a more casual lean in its design. Now that I’ve poured some time and effort into the finished title though, I walk away wishing there had been more focus on the fighting and less on its leading ladies.

Dressed and vying for success

SNK Heroines doesn’t go for subtle in the slightest. Its characters are thrown into skimpy outfits by default, attacks are paired to similarly themed hit sparks, and the only way to win a fight is with a flashy super attack. Where this is all felt the most is in the game’s story mode, throwing you into a series of fights leading up to a final boss with quick scenes interspersed throughout. This was where the game was at its most blatant with its fanservicey nature, mostly due to its villain character. 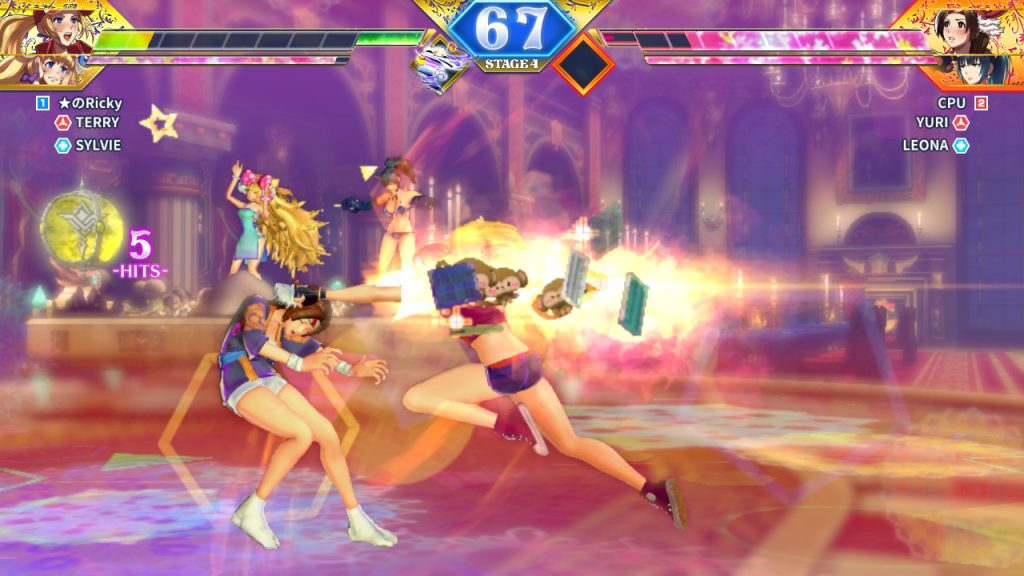 His plan involves trapping all the characters in his alternate reality mansion (changing one’s biological sex in the process), forcing them into these outfits, and making them fight to build up their embarrassment and fear as a means of powering his evil scheme. I can’t say I was a fan of this premise, basically forcing these characters into an exploitative reality TV show scenario for an attempt at titillation.

For anyone who wants to brush that aspect aside as best you can, it’s possible to skip the scenes as you play and use the in-game currency you build up to purchase different costumes for the cast. Each has three, one of which was usually the character’s original look and the other an alternative costume that lined up with the game’s over-the-top design. In fact, purchasing all these costumes and the game’s hundred or so accessories seems like the real objective here, and could keep someone busy for awhile if they wanted everything. 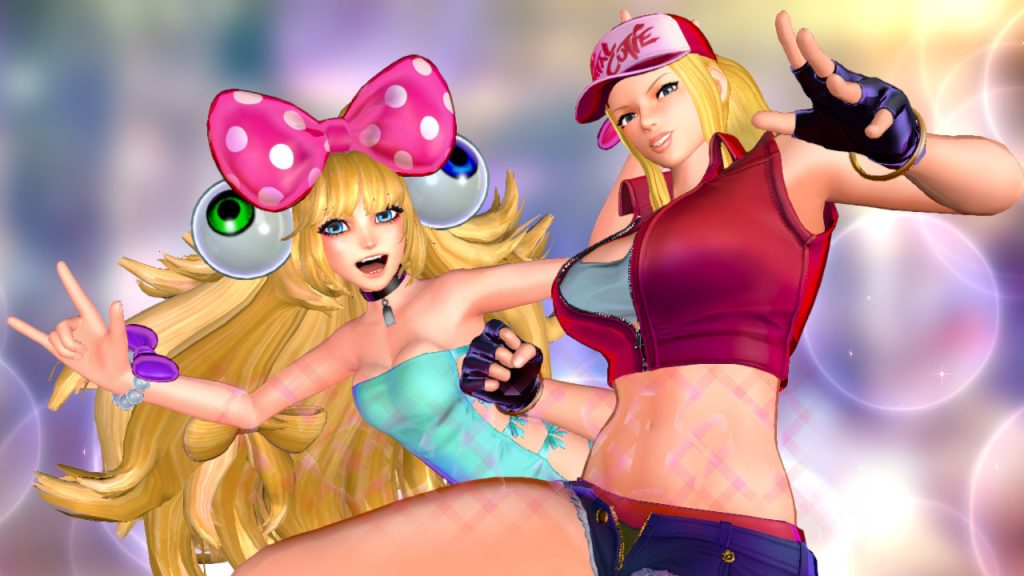 Once you start to throw these onto your characters things get silly real quick, and I can appreciate just how many options there are at large here. You gain currency after fights at a pretty good rate, with my story mode playthrough leading to new costumes and a few accessories easily. Again, I can see fans who take to the game playing through to unlock every last piece if that suits them, but unfortunately, I just don’t think SNK was able to grab me enough for that — and it’s firmly the fighting’s fault.

SNK Heroines presents some admittedly interesting ideas for its tag team fighting. Your two characters share a health bar but have separate special meters, effectively reversing what most team based fighters do. You can swap between them fairly freely as long as you’re standing on the ground, letting you extend combos off of cancels, wall bounces, and juggles. I even warmed up to the items, befitting the over the top style of the game and adding a sense of fun randomness to each fight.

My biggest complaint is how few normal attacks characters have though. There are only light and heavy attack buttons, with each only granting four different attacks based on how close you are or if you’re jumping. It pushes the focus towards understanding your characters’ specials, switching, and items — but it always felt limited even with that in mind. The lack of crouching normals was notable, and rather than the “hold back” kind of guarding most 2D fighters offer, this one uses a block button. It helps to not look at SNK Heroines as “most fighters,” and I learned that fairly quickly (thanks to the aforementioned) and what it takes to win a fight. 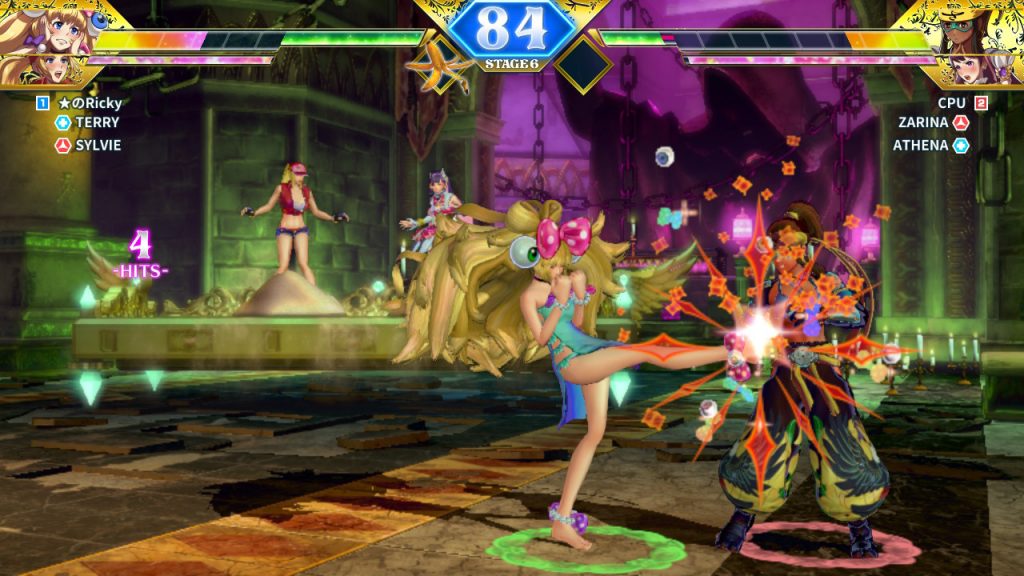 To win a fight though, it turns into a race to see who can drain their opponent’s health into a critical range and then perform a super attack. While it fits the flashy feel of the game, it gives each fight the same end goal no matter what it takes to get there. It’s possible to combo into them and I’m sure players more skilled than me will come up with some great displays of depth in SNK’s system once it’s released, but that doesn’t change the fact that the game’s appeal ran out fairly quick.

SNK Heroines: Tag Team Frenzy gets credit for trying something new in a genre that’s becoming more crowded on Switch. There are flashes of great ideas, but if the fighting falls short, then no amount of fanservice can pick it back up. Even with its heaps of customization and some eye-catching artwork, it’s a hard sell for die hard fans. As I played I couldn’t stop myself from thinking that its characters deserved better, and that I’d rather be playing a true King of Fighters title instead. That’s not a good sign, though I’m sure SNK will have its fans for being so unique and campy across the board. Still, this is one frenzy I’ll be tagging out of. 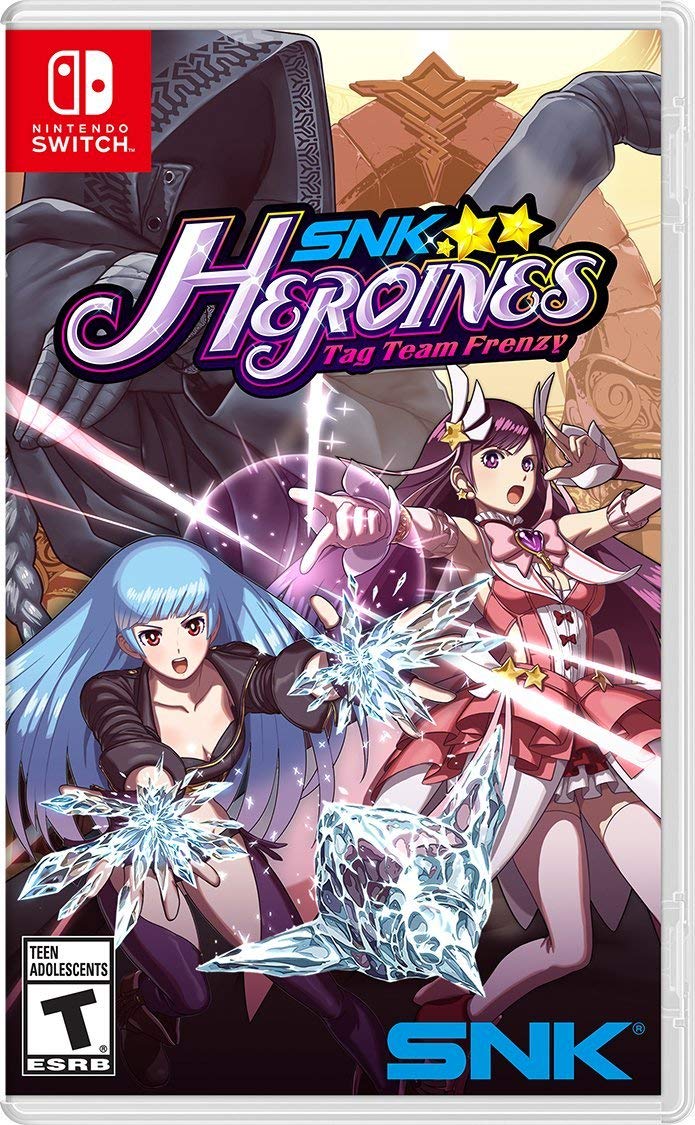