My favorite time of year is not Christmas, nor E3, nor some third event that falls somewhere between “national holiday” and “gamer news con” — it’s PAX West, a time in which developers big and small descend upon Seattle to showcase their blood, sweat, and tears before the masses. I attended my first PAX about two years ago, and at the time there were maybe a dozen titles shown off for the Wii U and 3DS combined, meaning that — while I had a blast — there wasn’t a whole ton to cover.

This year, I played almost 60 games for the Switch. And there were more I managed to miss. Of course, I run into a pretty big issue when I consider all that. How am I supposed to talk about all these wonderful titles — the vast majority of which are from little indie devs — in a way that doesn’t just drone on and on and on?

Welcome, friends, to the PAX West 2018 Fifty-Game Frenzy, where we’ll be running down each and every Switch game I managed to get my hands on at the convention. While a couple of the bigger titles will be getting their own separate impressions pieces (Smash, Mario Party, and Pokémon, to name a few), we’ll be going through the rest rapid-fire style, offering quick descriptions alongside lengthier details.

My intention with the Fifty-Game Frenzy is not to sell you on each and every game possible — we all have only so much time and money, after all, and it can’t be expected to be dropped on everything. Instead, take the opportunity each day to look through the game’s quick explanation, see if it piques your interest, and then read on. Considering the breadth of games on display, you’re sure to find something up your alley. So without further ado, let’s get started with some indie gems found in Nintendo’s own booth! 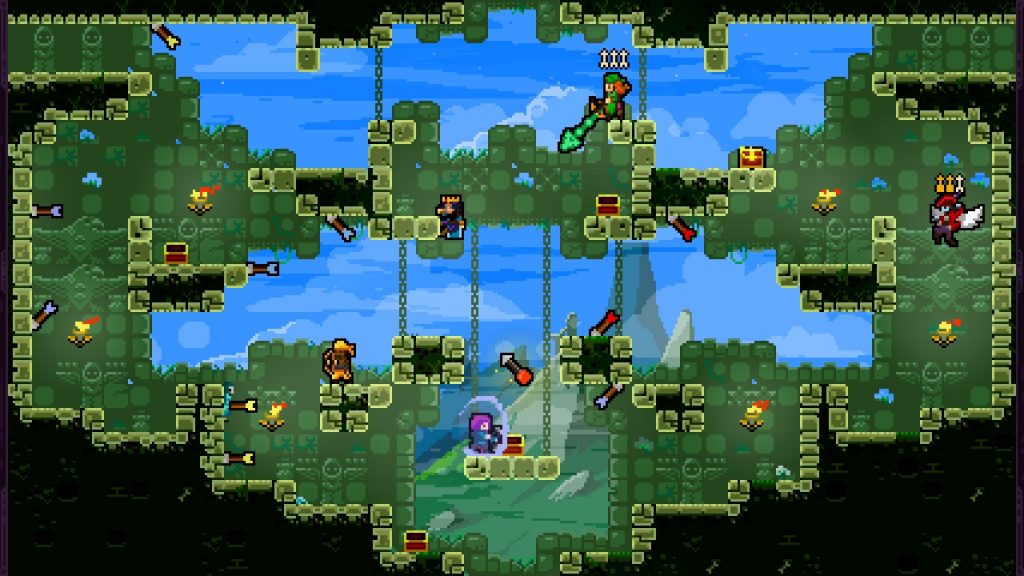 From the creator of Celeste comes his first game! If that sounds a bit odd, fret not; this is a port of 2013’s TowerFall to the Switch. TowerFall is a platform fighter where each character is an adept archer with a limited number of arrows. You can either pierce your opponents with said projectiles or hop on their heads to off them, and it’s one shot one kill (unless you have a shield). You can pick up arrows that have missed for more ammo, which you’ll need because rounds in this game go by quick.

I only got to play two matches of TowerFall, but they were both absolute blasts. As you would expect from Matt Thorson, controls are buttery smooth, the graphics are colorfully charming, and both platforming and aiming feel natural and intuitive. The Switch version will also feature six-player matches for the first time, and Madeline from Celeste as a new character! Considering how much I love that game, this is an easy recommendation from me, and it should be on your radar too if you’re into Smash style games with a twist.

Sometimes games let us release our inner demons without remorse. Untitled Goose Game reveals the flimsy trappings of your very morality by putting you in the role of a jerk goose whose sole purpose is to make life miserable for others. The demo here had me ruining a gardener’s day in a variety of ways: getting his clothes wet, stealing his keys, and nabbing all of his stuff in an effort to have a picnic. I destroyed this man’s day while quacking all the way. I’m a terrible person.

Befitting its humorous name, Untitled Goose Game is an odd little duckling among the flock of more conventional titles. But if you’re into weirder simulation games (Goat Simulator comes to mind, though this is much more restrained), then definitely give this one a look. As somebody who’s generally not a fan of the genre, I had a surprising amount of fun — both ironic and non-ironic — flapping about and just messing with the poor, poor man who just wanted to water his pumpkins. I’m sure I’ll face repentance for my sins someday, but for the moment I’ll take glee in dragging the rake into the pond while warking madly. 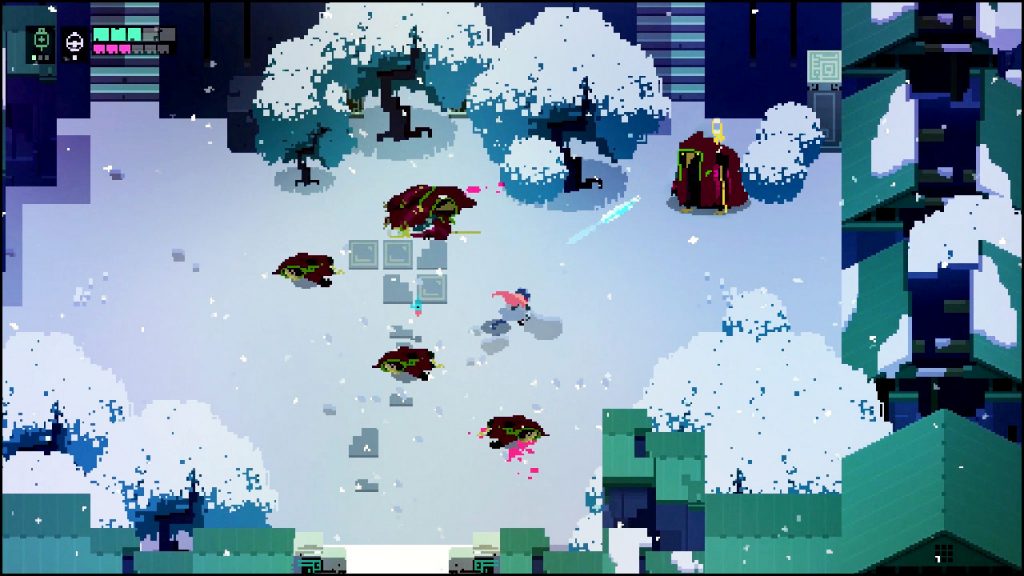 Now here’s something right on the doorstep! Hyper Light Drifter is an eye-catching action-RPG that’s part Zelda, part Diablo. Taking control of the Drifter, gameplay consists of smooth yet frantic combat, with both quick close-up melee strikes and ranged gun options. The game’s color scheme is one of the most particular I’ve ever seen, to the point where there’s no word to quite describe it, but gosh darn is it pretty.

While I usually fancy myself pretty good at PAX demos, I will admit I struggled to grasp HLD initially — probably because the pace reminded me of PlatinumGames (which is a good thing) and my brain was hardwired to dodge with ZR instead of B. But while I fell spectacularly several times before the demo’s boss, I could already feel the impressive level of difficulty, and by the end had improved very slightly. This one looks like it won’t be for the lighter-hearted, though you won’t have to wait long to get your hands on it. Hyper Light Drifter left me wanting to get better and master it, which to me is the ideal when losing, as it shows that the difficulty is fair instead of cheap. 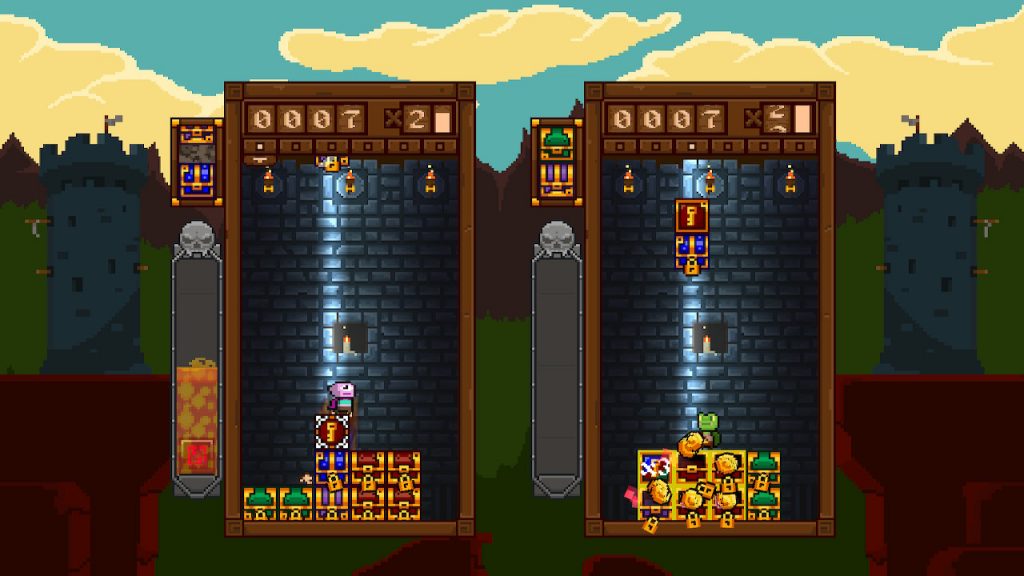 There’s only so much variation on falling blocks that you can have, but sometimes a little shake-up is all you need. Treasure Stack takes the classic Wario’s Woods style of gameplay — running around using keys (bombs) to clear chests (monsters) — and adds a grappling hook, which helps shift the game’s pace to what’s comfortable to you… unless your opponent has anything to say about it. Combined with a goofy sense of character customization (I played as a frog with a pizza grapple and regret nothing) and you have a glittering good time.

I’m not the local puzzle game aficionado, but the round I played of Treasure Stack definitely felt like something different. This specific niche is not fulfilled too often these days, so it can be nice to get a bit of a throwback. The game boasts lots of multiplayer options (including crossplay with Xbox One!) so keep on the lookout for it this winter. 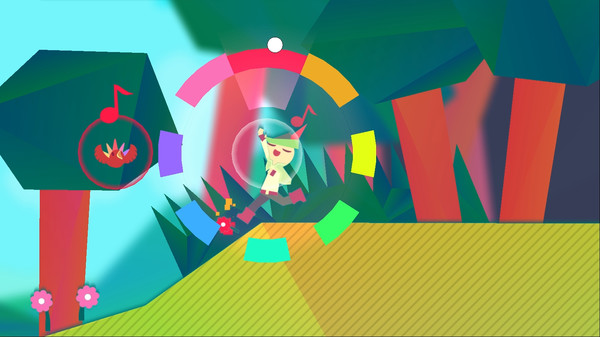 While not in the Nintendo booth, I’m glad I was able to get my hands on this little title. Wandersong is reminiscent of cardboard paper projects you might do as a kid, and the entire game exudes an atmosphere of cheery exuberance like few others I’ve seen. As a chipper little bard you set off into a 2D world, singing different pitches on an eight-note scale with the right stick, utilizing particular sequences to solve puzzles and progress.

The demo I spent time with was rather short, but even so I had a big ol’ grin on my face the entire time as I played along with a birdsong and then played a more extensive rhythm game to learn an ancient song. (The developer said I did the best for a first-timer that he’d ever seen, which made me feel rather special, honestly.) The slice I got of the game was tiny, but sometimes that’s all it takes to hook you. If you like the instruments in Zelda games (the Ocarina, the Wind Waker, the harp, and the wolf howl), then you’ll be right at home here.

That’s it for today’s portion of the Fifty-Game Frenzy! We’ve just barely gotten started running down all that PAX had to offer, so keep on the lookout in the coming days for more coverage of the finest titles that gaming has to offer. Until then!