Regardless of what types of games I played growing up, sprites are always going to define “video game” for me in a visual sense. There’s something so pure to the medium about pixels coming together — you can even guess when a game was created based on how it looks or sounds. Place a NES game next to a SNES game and the difference is night and day, both with audiovisual thumbprints that are hard to mistake.

Plenty of modern games evoke that style, and they might simply look good; there might not be any deeper reason as to why those stylistic choices were made. When a game takes those unique characteristics and uses them alongside its own ideas you end up with something special. Sabotage Studios understood all that and more, and with that notion in mind they’ve delivered what might be one of the finest video game experiences I’ve ever had.

How to deal with time travel

The Messenger presents itself initially as an 8-bit action platformer, most akin to Ninja Gaiden. You move through sectioned off screens, dealing with various enemies and platforming sections with double jumps, wall climbing, and more. Checkpoints are plentiful so the game ramps up in difficulty at a steady pace, yet it almost always remains fair, with only optional rooms holding more blatant challenges. Deaths spur you on rather than deter you, aided by clever level design and exciting boss fights. 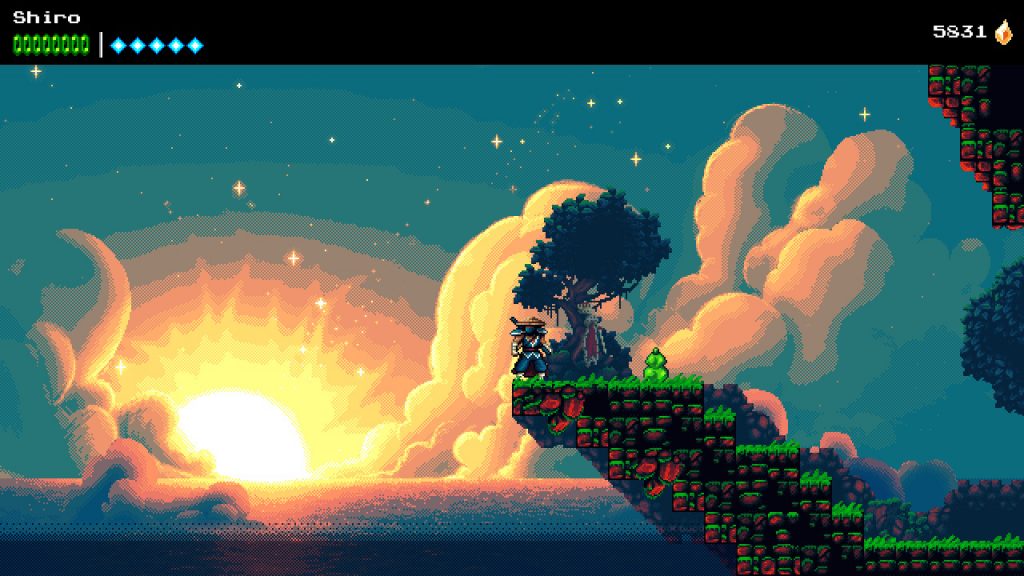 About halfway through, the game opens up and changes entirely, granting you access to time travel that’s ingeniously reflected by upgrading to 16-bit visuals and music — shifting the genre to a Metroidvania. You have the ability to return to the previously straightforward areas you ran through in the past and are able to explore them, hunt down characters and items to progress, and experience things in a whole new way.

This use of video game time periods to reflect in-game eras has been seen before, but I’ve never played a game that used it to this degree. Every enemy, song, and area is here in 8 and 16-bit, with only certain sections and boss fights exclusive to one or the other. It constantly managed to impress me, both for its applications in gameplay and presentation.

Okay, THAT is a really cool hat

The sprite work is excellent, especially for the environments of its stages. You’ll see lush bamboo groves on a river, floating cloud-top ruins, the mystifying Tower of Time, and the hellish innards of the demonic underworld; with differences beyond just the graphical quality, making each of their two time period versions distinct. Praise must also be given to the soundtrack, courtesy of Rainbowdragoneyes (again, with songs both in 8 and 16-bit styles), which is still absolutely stuck in my head well after playing. 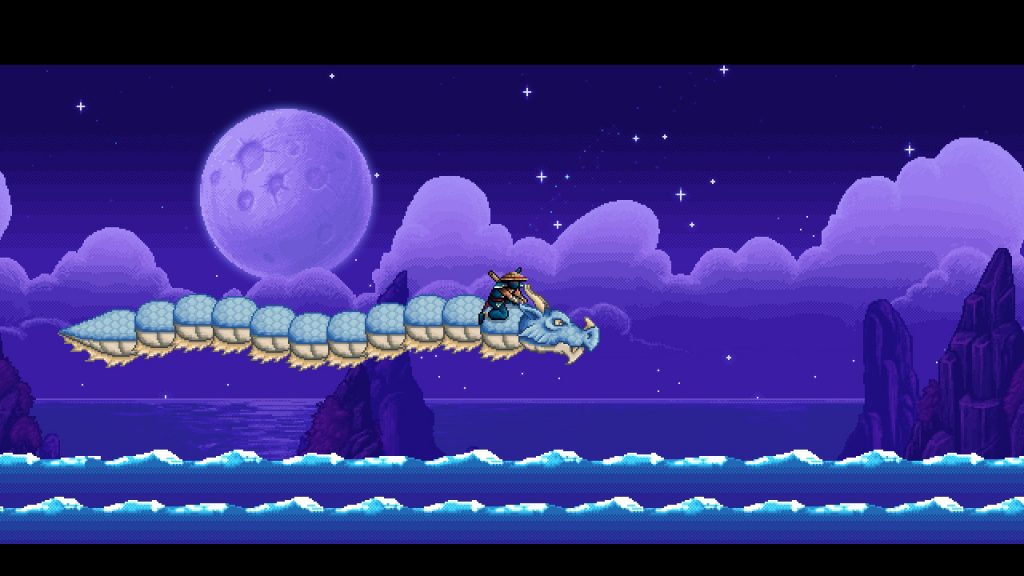 For a game rooted in more classic eras, The Messenger delivered a surprising amount of story and character. Things kick off with your ninja village home being besieged by demons, with only you left to deliver a scroll to your island’s tallest mountain — all this is according to a vague prophecy. If it had ended there, no expectations would have been shattered, and I’d have accepted it as an excuse to experience a variety of levels across the journey.

Instead, the game treated me to a handful of distinct characters, some narrative surprises and turns, and a self-aware sense of humor that balanced the dire stakes. Not everything hits, but it’s consistent and well done, with the Shopkeeper in particular being a pleasure to talk to thanks to his unique commentary and full-on stories for every turn of the game.

Speaking of shopping, you’re able to purchase multiple upgrades for your skills and tools with Time Shards found frequently as you play. You can get these in any order, and ignore some outright for the sake of challenging yourself if you so choose. The only threat to your wealth on the way to grabbing all of these is Quarble, a little demon who warps you away from death and back in time whenever your health runs out. Afterwards, he’ll snark at your expense or comment on just how much he’s helped you, then follow you around to suck up your collected Shards until he’s repaid for his services — or until he gets bored. Whichever comes first. 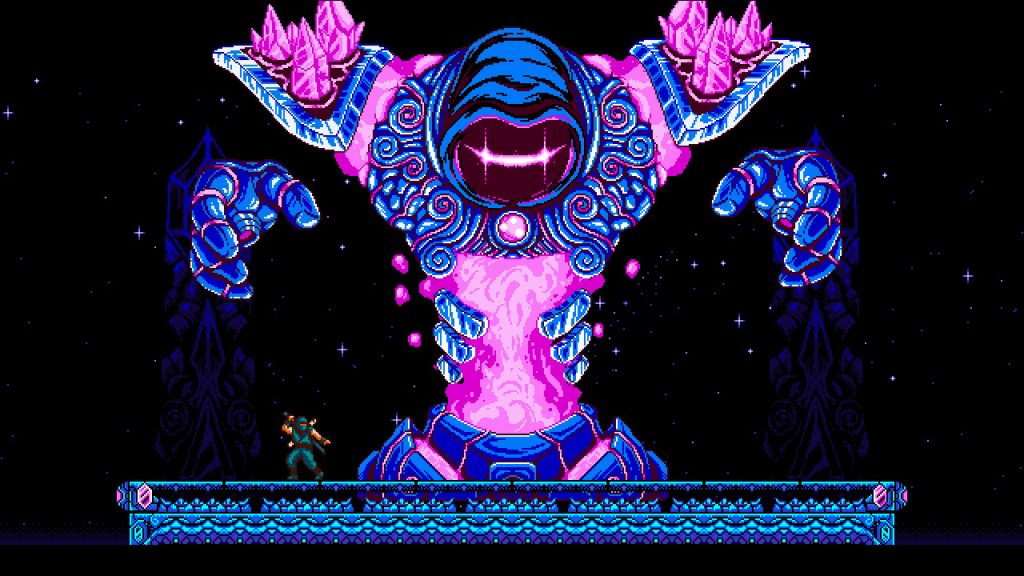 Bringing it all together through time

Uniquely devised characters like Quarble provide the perfect example for how The Messenger uses the platformer medium and a crafted world to have its mechanics make sense — and charmingly enough, some extra flavor is added in the process. This is a game that knows it’s a game and revels in it, embodying the best of its core inspirations while adding its own ingredients to the mix. I was hooked within minutes of starting and was rewarded for my time with all the genuine joy of playing a video game.

Two mechanics in particular deserve special mention: Cloudstepping (aka, the game’s double jump) and time travel itself. Cloudstepping is at the heart of your traversal and interactions with enemies, as you can only double jump after you attack something in midair. Be it a well placed lantern, enemy, or projectile, these elements form paths through the level for you that are a joy to get through (especially once you add other travel skills into the mix), and they can range from rewarding bursts of momentum to tests of precision and quick thinking. 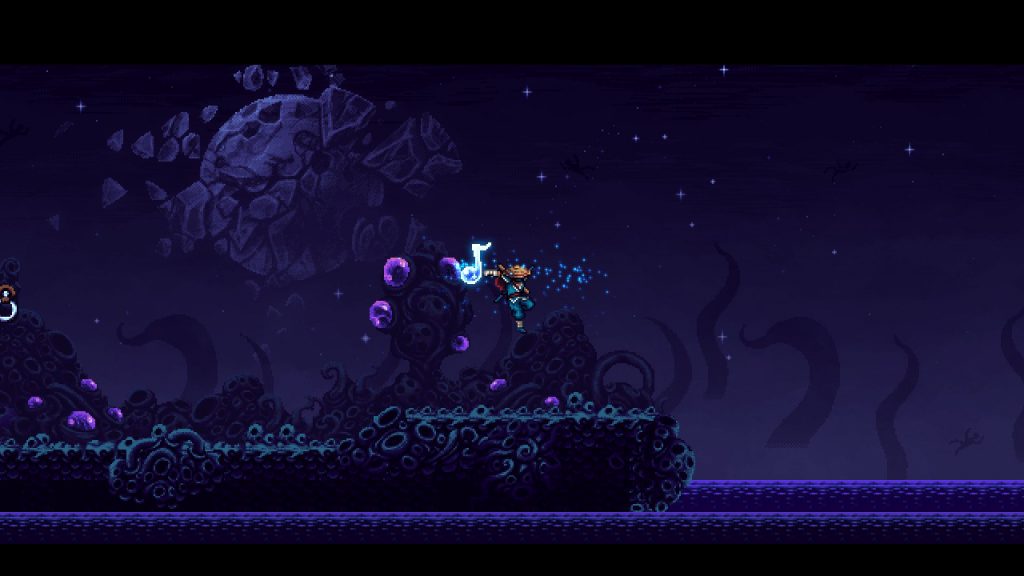 Time travel shapes the entire game in a different way. As stated already, it forms the crux of the story, justifies a lot of its writing, and plays into the game’s soundtrack and visuals. Interstage warps also allow it to create puzzles that toss you from one temporal end to another, and challenge the way you think about where to go and how you should go about doing it.

To progress to certain key items, you might have to reach a screen during a certain time period. While the game is usually generous enough to offer ones nearby to these, it also might task you with figuring out a route that lets you bypass mandatory chronoshifts. This helps show off new sections of the levels, and other times, it lets The Messenger be one of those rare games where I can enjoy backtracking.

Repeat traversal can happen though. Gates from your eventual hub allow fast travel to certain, set points but pending how thorough you are with exploration or what order you do things in the second half of the game, it can happen in greater measure. There were also times when I had close to no idea where to go next. Thankfully, the game has its own internal hint systems. Talk to one NPC and you’ll get vague riddles to guide you, but if you want something more clear-cut you can cash in some Time Shards instead. It’s a fair price for clarity, and something optional and avoidable for those who want to do it all on their own. 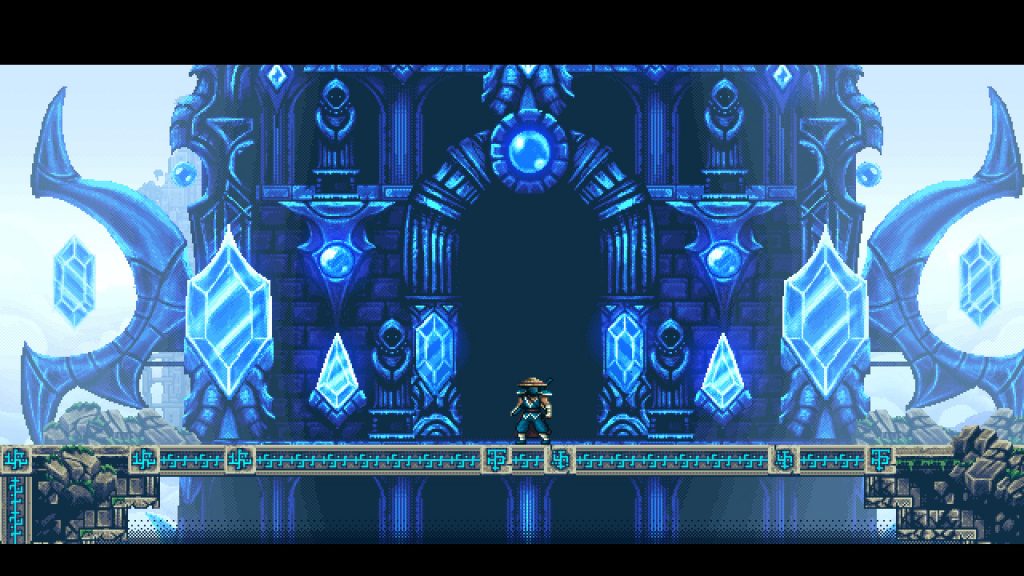 Full of character, story, well crafted stages, and superlative sprites and music, The Messenger should already be Cloudstepping its way to the top of your list of most wanted Switch games. In a year full of fantastic indie titles, it manages to live up to their precedent while arguably surpassing them. You can compare it to what’s come before, and you can look forward to what might come next from Sabotage Studio, but more than anything you should take some time to play The Messenger as soon as possible, here and now. 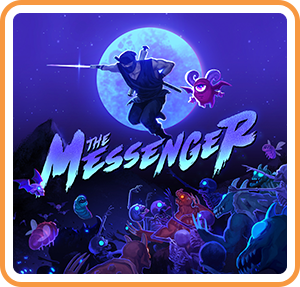