It’s no secret that I’ve been a huge fan of both Metroidvanias and roguelikes ever since I was a old enough to coddle a controller. Like peanut butter and chocolate I’d always imagined the two could go together smoothly, despite their conflicting concepts around general progression and character growth. Games like Sundered, while aesthetically mesmerizing, came close to capturing the magic I’d always envisioned, yet ultimately fell flat in balancing elements of both genres equally.

Excitingly, developer Motion Twin seems to have cracked the code, going so far as to coin the term ‘roguevania’ when describing their latest adventure in alchemy, Dead Cells. Turns out it can work, as Dead Cells boasts some of the most inspiring implementations of roguelike design in the Metroidvania formula I’ve ever witnessed. Its interconnected world, exhilarating combat, and unique perk mechanic bond beautifully with concepts of permadeath and procedural generation, pioneering an entirely new subgenre for future developers to live by. 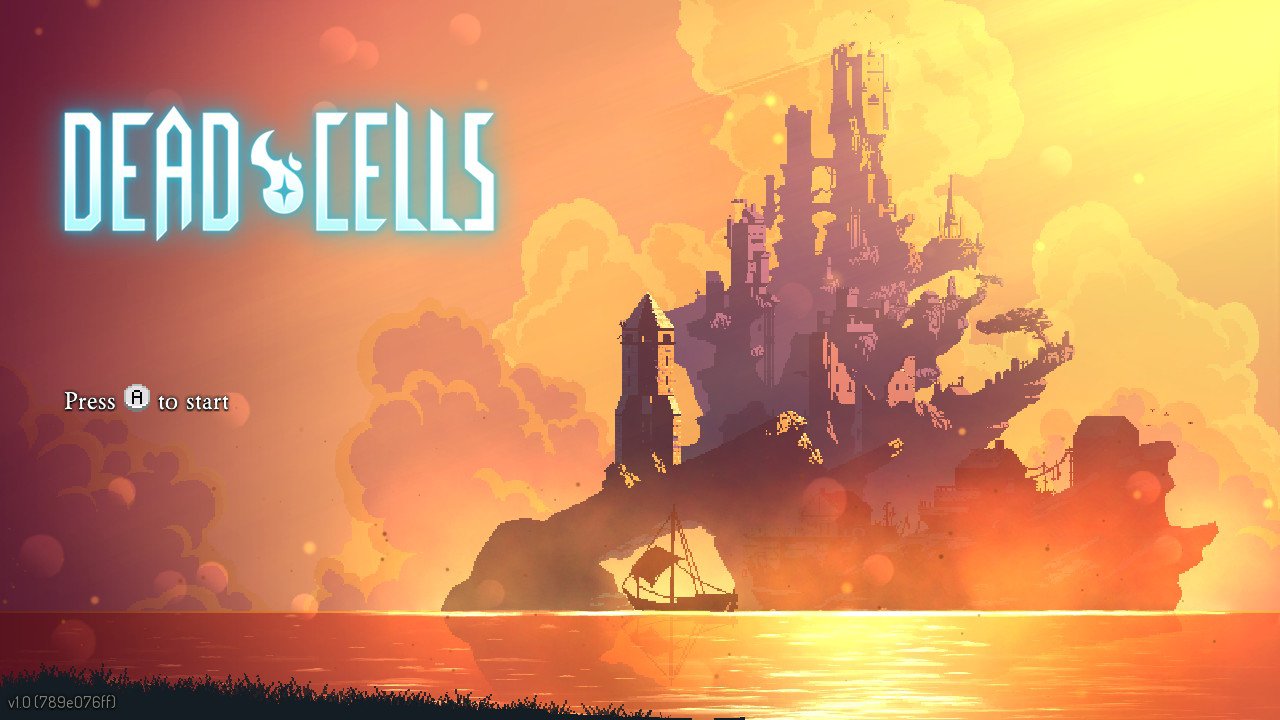 SYMPHONY OF THE CELLULITE

Taking great inspiration from the Belmont clan’s many misadventures, Dead Cells follows one man’s quest through demonic hordes and cursed castles. Though unlike Dracula’s monster-filled manor this one’s stuck in a perpetual Groundhog Day — its inhabitants cursed with immortality and forced to possess the fallen husks of warriors past for all eternity. It’s rumored that those seeking salvation can break this endless cycle of torment, but only after fighting their way to the throne room where a merciless king and his most loyal servant await.

Of course, anyone who’s ever seen an episode of Game of Thrones knows snuffing out a corrupt monarchy is easier said than done. The king’s haunting, yet beautifully pixelated palace is home to some of the most dangerous and decrepit creatures this side of Transylvania. Whether shanking shambling corpses in toxic sewers, cleansing necromancers in a hellfire of holy water atop crumbling ramparts, or plundering pirates in an abandoned seaside village, there are plenty of otherworldly abominations begging for a dirt nap. Assuming they don’t take a bite out of you first… 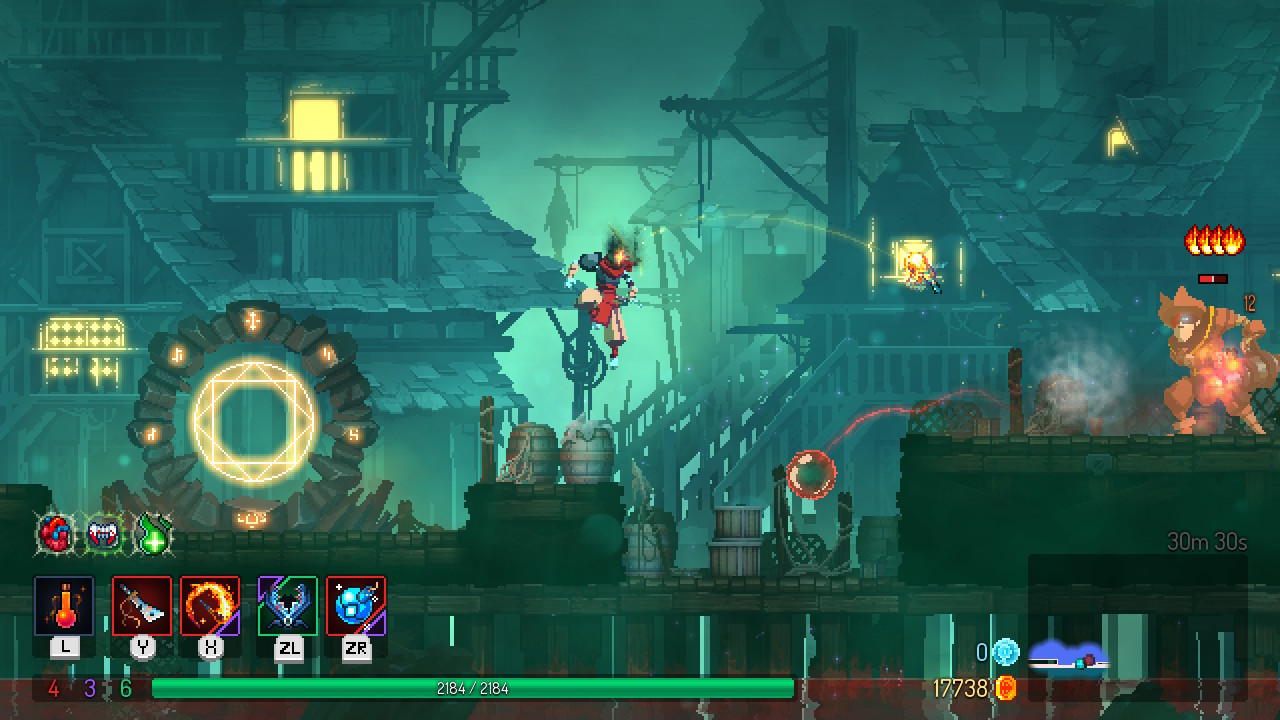 And believe me they will, because like all roguelikes death isn’t just an expectation — it’s an inevitability lurking around each and every corner of Dead Cells’ design. Admittedly, the permanent nature of dying and frequency of having to start the game over from scratch won’t do much to sway those typically turned off by the genre. Especially true during early hours, death will come swift and without mercy as you struggle to memorize enemy attack patterns and master the fast and fluid controls. Those who do stick it out, though, will find what kills you only makes you stronger, not to mention one most deep and rewarding combat systems to ever grace the genre.

THE PERKS OF PERMADEATH

How is combat rewarding, you ask? For one, each run-in with the reaper offers more than just a chance to learn from past mistakes and sharpen skills. Between each stage players purchase permanent upgrades using cells — the game’s primary means of currency. These molecular bad boys are looted from defeated foes and can be used to unlock anything from additional weapons and health potions to increased drop rates and stat buffs (known as mutations) — assuming you’ve found the necessary blueprints first. Simply put, the more cells you invest, the more you become a powerhouse of death and destruction capable of laying waste to anything in your wake.

Cells aren’t the only currency being tossed around these darkest of dungeons. Like any kingdom worth its weight, gold keeps the economy alive. In fact, the castle’s coffers are overflowing with the stuff, used primarily to purchase weapons from merchants and reforge their modifiers at the local blacksmith. Outside the occasional locked doorway there’s not much else to save towards, providing great incentive to blow it all on that explosive crossbow you’ve got your eye on. 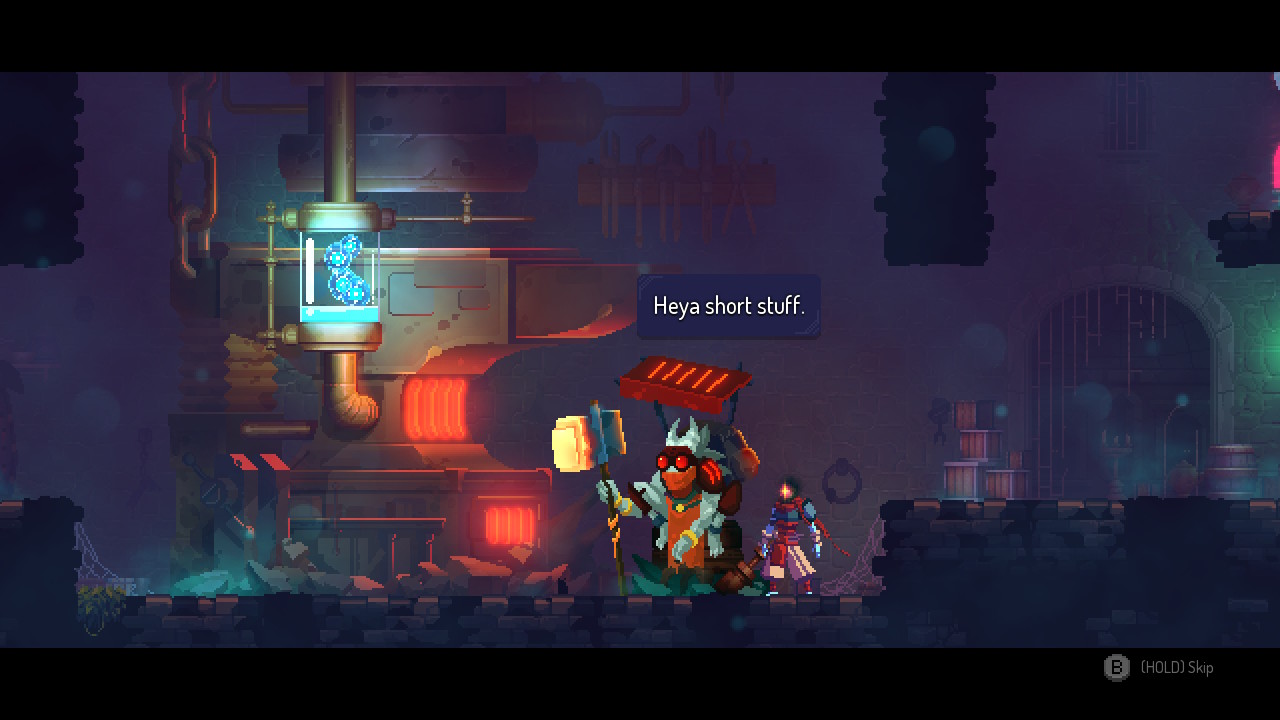 With merchants and blacksmiths abound, it should come as no surprise that the vast arsenal of weaponry prove the shining stars of Dead Cells’ gameplay loop. Weapons range from heaving hitting broadswords and crit-dealing daggers to a bounty of bows, spells, and traps — each with different modifiers and elemental properties. Surprisingly, a good shield can prove most devastating, with perfectly timed blocks and parries capable of felling fiends with a single blow. Honestly, the sheer number of possible weapon combinations is staggering, one of my favorites being ice grenades with the automated support of heavy turrets or sinew slicers. Why get your hands dirty when you can blind your enemies with science!

Not just for show, the weapons you arm yourself with play a major role in how you outfit your character. While games like The Binding of Isaac rely much more heavily on item randomization in determining your build, Dead Cells offers near limitless freedom. Scattered about each run are scrolls for raising any one of three primary stats: Brutality for harder hitting attacks, Tactics for stronger traps, and Survival for increasing health caps. The stats you focus on will largely depend on your playstyle, weapon preferences, and a bit of luck regarding the items you come across. For example, do you maximize Brutality to create a glass cannon fragile as a flower, yet capable of hitting harder? Or do you dump your scrolls into Tactics to train a badass bowman who relies on ranged attacks and tricky traps to do their dirty work? The choice is yours, which is a refreshing change of pace in a genre where lady luck often holds all the cards. 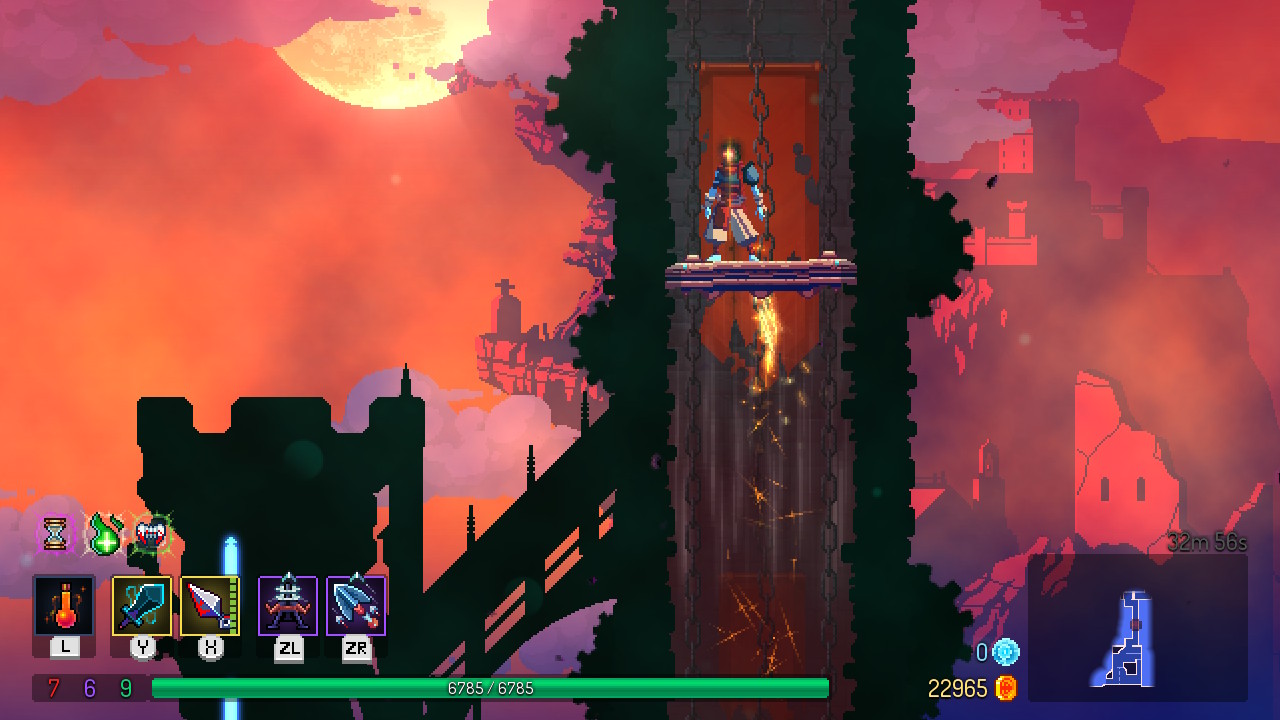 Resting beneath the foundation of Dead Cell’s addictive combat is a cleverly crafted world begging to be explored. Stages, despite being procedurally generated, are more structured than your average roguelike, offering branching pathways, secret exits, and hidden blueprints well worth uncovering. Hidden runes put the ‘Metroid’ in ‘Metroidvania,’ acting as permanent abilities for further exploration, often found in the deepest recesses of stages. Climbing up walls, smashing through floors, teleporting to out of reach places — these are just a few of the techniques you’ll gain with enough soul searching. Given the game’s nonlinear structure you’ll need them, too, should you wish to find all the trinkets, treasures, and lore Dead Cells has to offer.

Interestingly, your choice in direction also has an effect on which bosses you encounter. Brutal yet fair, these most loyal of lackeys will put your combat prowess to the test, especially during those first few attempts learning their many nuances. Sadly, there are only four of them roaming the castle walls, three of which you’re guaranteed to encounter per playthrough. Elite mobs — souped up variants of regular enemies — try to help fill in for this drought, but ultimately prove poor substitutes. Perhaps I’m simply spoiled by genre expectations, particularly games like the Binding of Isaac or Enter the Gungeon where a rotating roster of big bads tail-end each and every stage. Heck, even Castlevania III, arguably the game’s greatest source of inspiration, closed out each level with a bang! Nevertheless, it felt noticeable enough a grievance to mention, especially for those who love a good fight. 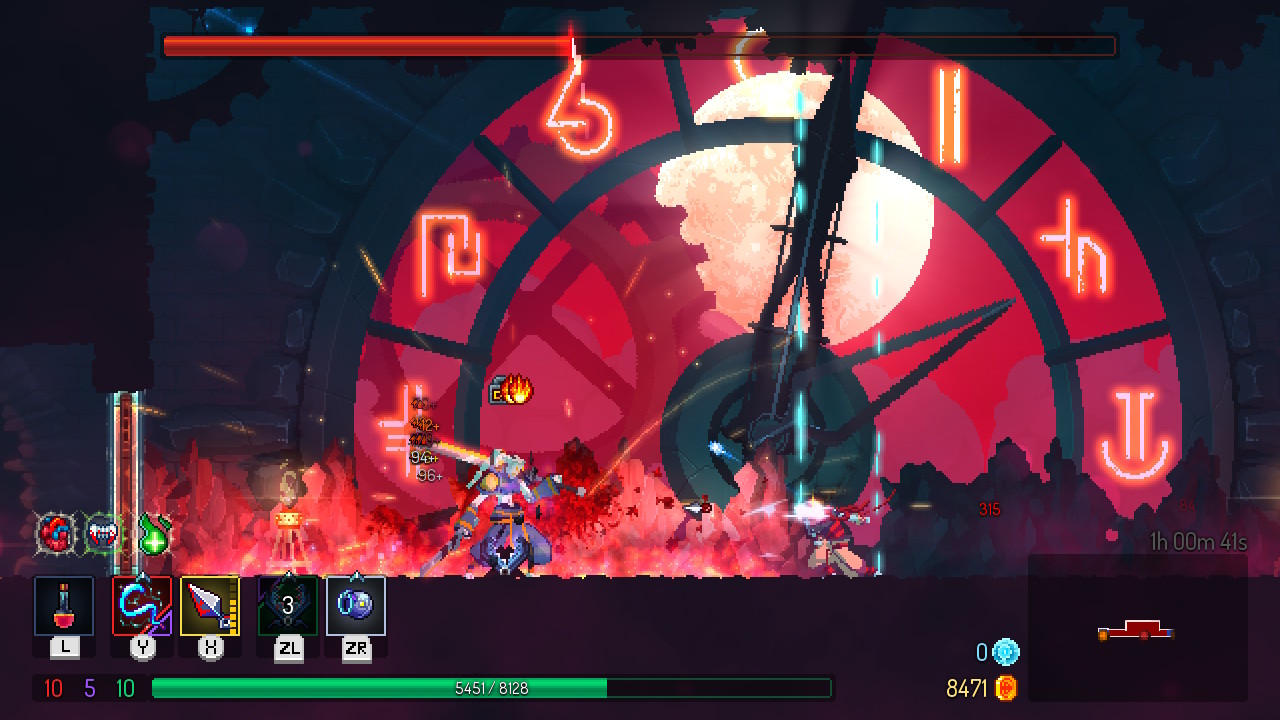 That said, those tough enough to reach his majesty and strike the killing blow unlock one of the game’s most intriguing features. Upon completion players are rewarded Boss Cells — difficulty modifiers used for raising the stakes upon future runs. The more Boss Cells you have equipped the harder the game gets, from less forgiving mobs and reduced health restoration to sustaining poison damage when struck by enemies. They’re completely optional, but you need to have all currently obtained Boss Cells equipped to unlock the next one. Beyond the thrill of the challenge, the upside is gaining access to new perks in the Foundry, secret doors in stages, and increased drop rates on cells. All in all it’s a clever way to give the most diehard of players more bang for their buck.

From crypt to keep, Dead Cells is a modern marvel in 2D action platforming. It takes the molecular structure of a Metroidvania and bonds it with the replayability of a roguelike, creating one of the most addictive, cellularly sound single player experiences on Switch.

Now go buy the game so I have someone to share in my frustrations. 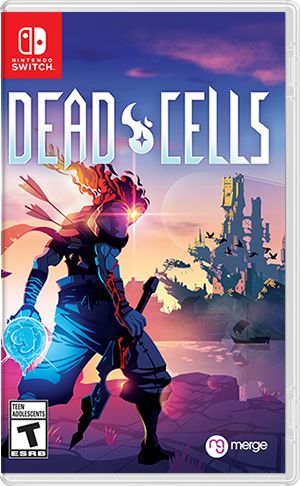