With a non-stop onslaught of new information coming from today’s Smash Direct, the official website for Smash Ultimate has been touched up across the board. Multiple new sections are available to check out, including the addition of fighters Simon, Richter, Chrom, Dark Samus, and King K. Rool — along with their respective trailers.

The “How to Smash” section saw an update to include a new menu system and a tab for Game Modes. There you can get quick rundowns of Squad Strike, Tournament Mode, Special Smash, Classic Mode, and Training.

“Stages” finally opened, showing over 100 that’ll be available from the game’s start. For the most part they’re displayed in release order, letting you spot your favorites easily. Some have also seen slight name changes due to potential overlap, such as what was Yoshi’s Island in 64 now being Super Happy Tree. You can also spot details on Stage Morph and My Music at the bottom.

“Items” is ready to show you its wears as well — now featuring a small sampling of the weapons, tools, pickups, and more that can make your fights as crazy and varied as can be. Newer items get a full description, while older ones are limited to their key art. There are sub sections for both Pokémon and Assist Trophies. Don’t worry though, plenty more are still on the way.

While “Music” is still the same as it was before, it also updated with the first Castlevania track for Smash: an arrangement of Bloody Tears & Monster Dance together as one. There’s also now a “Video” tab for easy access to all the major Smash trailers, Directs, and demonstrations. 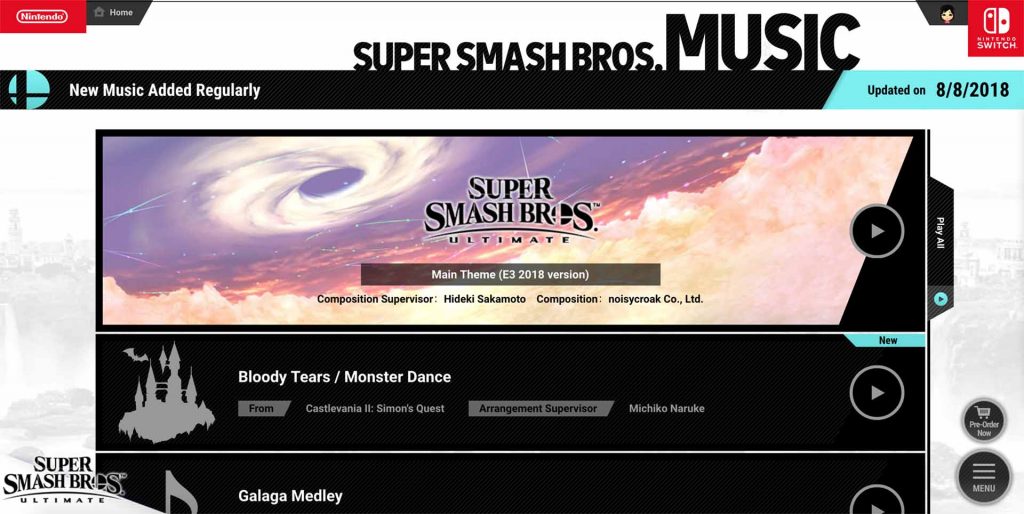 Be sure to check back daily, with new updates and screenshots coming in for all of these sections. It’s been one hell of a day for Smash, and if the game keeps growing on top of this, I can’t imagine how stacked the site will be come December.