Monopoly and Mario Party are some of the most frustratingly fun games I’ve ever had the (dis)pleasure of playing. To this day my family can’t finish a round of either without rage quits, hissyfits, and idle threats to the winner’s physical and mental wellbeing. To an outsider we look crazy, yelling at one another over something as mundane as stealing stars or refusing to pay rent after landing on Boardwalk. Yet still we come back for more abuse, year after year, because there’s something intrinsically entertaining about pushing people’s buttons and letting a game grind your gears into oblivion.

Few games in my lifetime incite these same emotions so perfectly than the sequel to 2016’s flambé of fury, Overcooked. To the casual observer, the game’s nothing more than a silly four player co-op romp about cooking under pressure. Of course, those who’ve scratched their Spatulas at the surface know the stress it ignites is more harmful to the heart than any number of greasy hamburgers you’ll spend your time frantically flipping with friends. But my god is it a heart attack worth having! 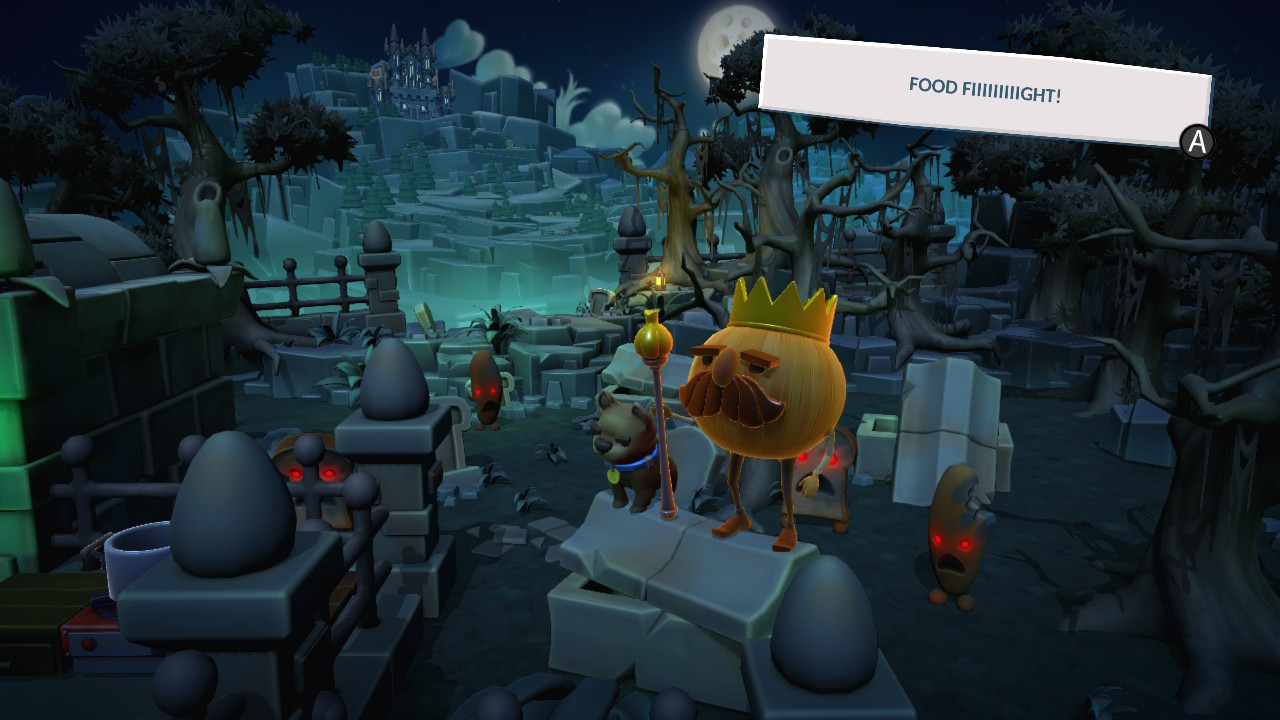 Much like the first, Overcooked 2’s story doesn’t really factor into gameplay much beyond some opening and closing cutscenes, but damn if it isn’t ripe for comedy. Our culinary quest begins back in the Onion Kingdom, only this time it’s the King himself who’s to blame for kickstarting the chaos. After foolishly reading aloud from the fabled Necro-NOM-NOM-icon, a legion of undead bread, or Unbread, rise from their graves to wreak havoc on the once peaceful nation. Oven mitts in hand, it’s up to a courageous troupe of super chefs to cook up a storm, save the world, and put these doughy demons back to rest.

So just who are these heroic connoisseurs of the kitchen? The chefs themselves run every color of the rainbow, from gap-toothed teens and grumpy old men to handicapable racoons and robots with a passion for pasta. Progressing the game only unlocks more of ‘em, providing players with a smorgasbord of apron-clad cooks to choose from. While purely aesthetic and without any inherent abilities to harness, there’s something bizarrely satisfying about seeing a cat and mouse work in unison to plate a pizza while a mythical unicorn does the dishes. 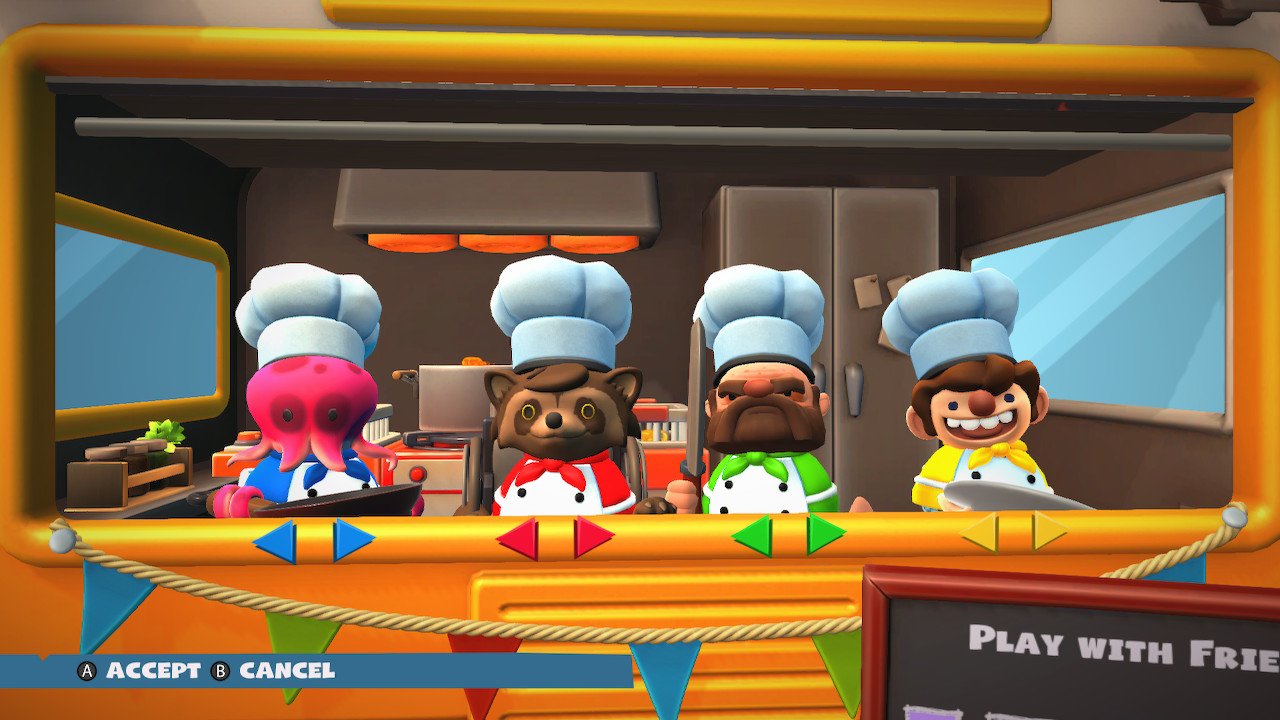 Fellowship of kooky characters in tow, you’ll need to sharpen your skills in the Kingdom’s many kitchens before making chop liver of the Unbread menace. The MVPs of gameplay, each one is carefully designed to toss players out of the frying pan and into the fire, offering mind-bending puzzles that would make Professor Layton himself green with jelly. Boiling pasta in underground mine shafts while chasing runaway food carts, frying pancakes in wizarding worlds possessed by portals and ghostly staircases, baking pastries on alien planets after being sucked into an interdimensional vortex — these are just a few of the bizarre environments you’ll find yourself working around, each more deviously designed than the last.

At the end of a busy shift, cooking through the calamity your team’s performance is given a star rating, one being garbage-tier and three the highest of honors. You’ll need a good majority of these star-studded suckers to unlock stages and see the entire story through, though thankfully the score thresholds for snagging them are much more forgiving than in the original game. The pacing of stages also feels more balanced, ratcheting up the difficulty alongside natural progression more fairly than the peaks and valleys of its predecessor.

SPICE UP YOUR LIFE

More than just a reheating of leftovers, the sequel adds a lot of new spice to the original’s recipe. First and foremost are dynamic kitchens which add a new layer of depth to the series’ already chaotic cake. What starts out as a leisurely stroll through the heavens serving salads from a hot air balloon quickly divulges into madness as a storm sends you careening into a sushi restaurant below, the flames blazing fiercely amongst the wreckage as you frantically work together to serve new dishes alongside withstanding orders. It’s in these moments that Overcooked 2 is at its best, requiring perfect team collaboration and communication to come out with high scores.

With new levels comes new recipes for veteran chefs to memorize. In fact, the sequel’s cookbook doubles down on the eight recipes featured in the original menu. (Though, oddly, soups are nowhere to be found.) Steamed meats, raw sushi, pasta, pancakes, and more enter the fray, each requiring mastery of brand new ingredients and equipment.

To help better cope with all the mayhem happening on screen a new throwing mechanic made the cut. Players can toss uncooked and raw ingredients to one another from across the room — even directly into pots and pans should their aim prove true. Got the upper body strength of a wet noodle? No problem! There’s no three-second rule here, and it’s a medical fact that floor cheese enhances flavor tenfold… right? Try not to think about it. Just keep pushing those orders out at a steady pace, and before you know it, you’ll be swimming in tips.

Those who fancy themselves among the cooking elite will want to seek out one of several bonus stages littered throughout the overworld. Hosted by the Onion King’s ever loyal pupper pal, Kevin’s kitchen is sure to put your ladles to the test, serving the game’s most difficult and adrenaline fused challenges to date. If you prefer steaming meats and vegetables in the middle of ongoing traffic or labyrinths of conveyor belts, believe me when I say your chariot (or in this case food truck) to hell awaits. 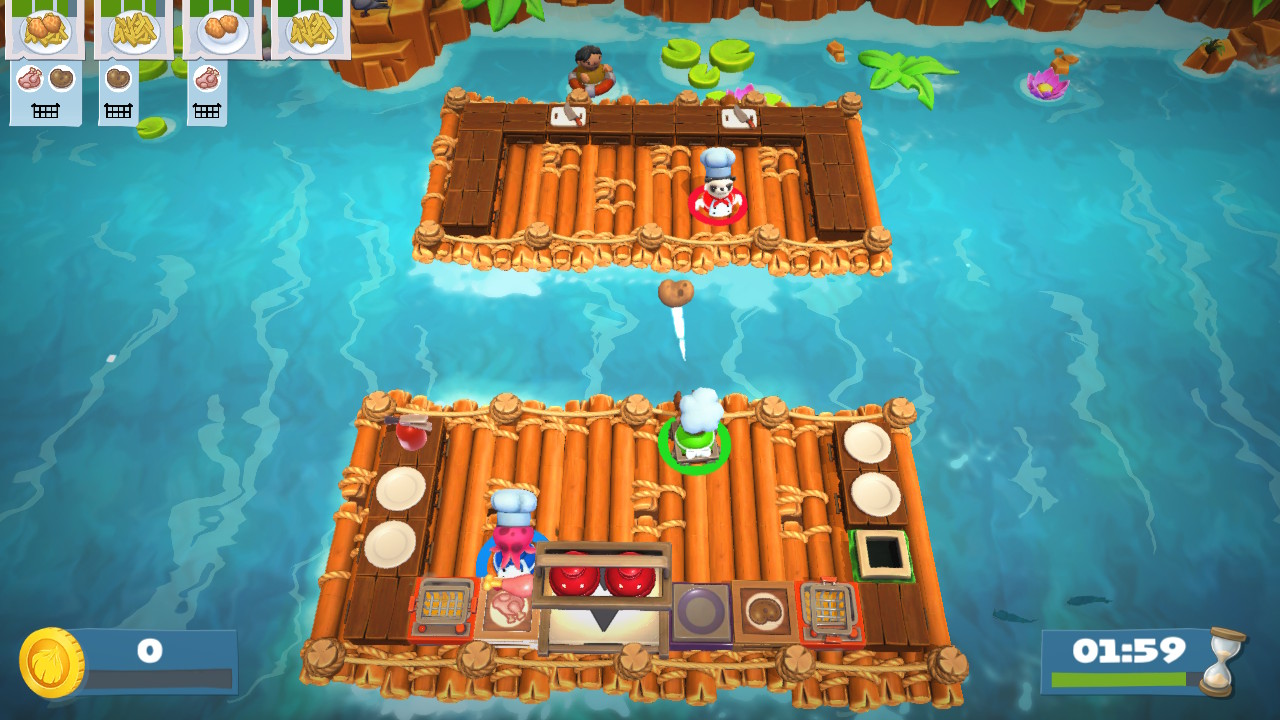 If it hasn’t been made clear by now Overcooked is better played with up to a group of four friends. Each stage is a glorious food fight for kitchen superiority the more players you tack, yet still somehow still leaves room for strategy. Granted, you can experience the entire campaign and its addictive Arcade Mode solo, swapping between two chefs with the simple tap of the button, but it’s not recommended. It’s a lot like trudging through The Legend of Zelda: Triforce Heroes alone — it’s doable, but diminishes the point in playing. After all, it’s not a party until you’ve made a grown man cry for dropping your chocolate pancakes into a river.

Fortunately, those without an entourage of sous chefs can enlist help online. That’s right, fellow fry cooks! Previously restricted to couch co-op only, players can finally add a little culture to their dishes and call in their culinary comrades from anywhere around the world — whether standalone levels in Arcade Mode or the entire story campaign. 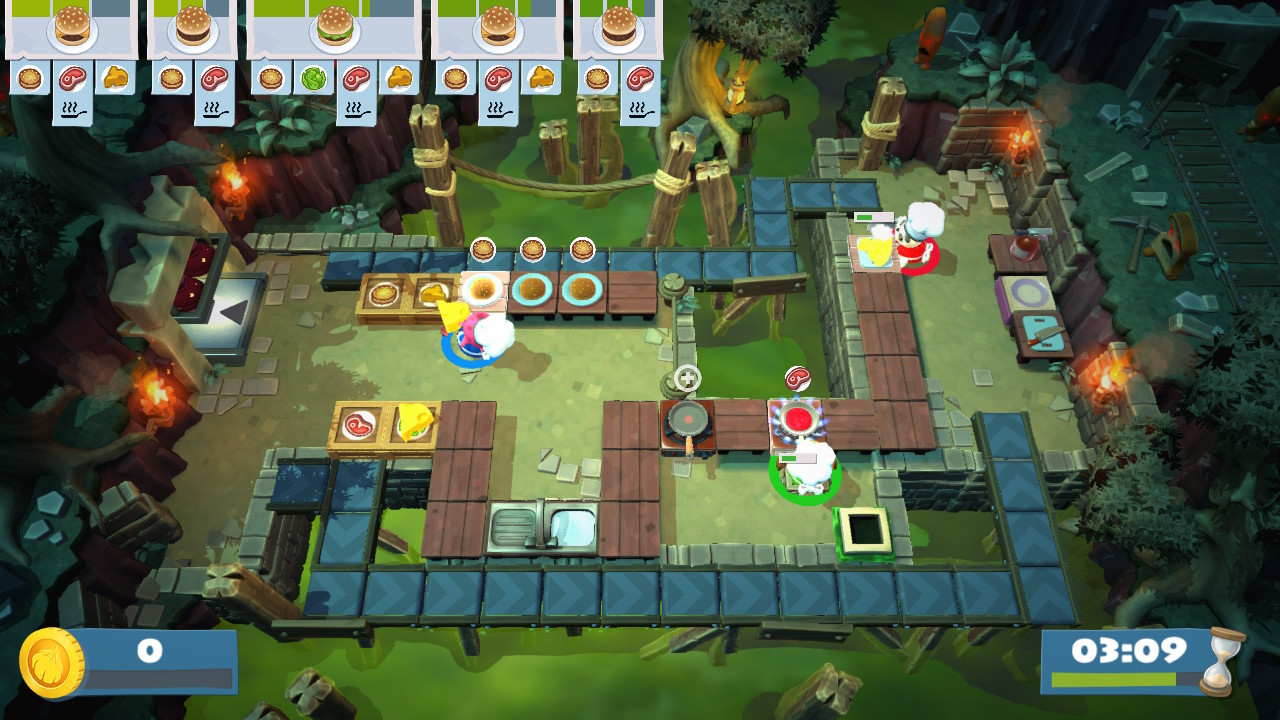 To compensate for the Switch’s lack of voice chat, a task wheel can be accessed with the simple hold of a button, used to inform other players what role you plan to play — like cleaning, frying, or serving the next available dish. While great in theory, it’s no substitute for speaking, especially given the insanity that can ensue in most kitchens without proper communication and role delegation. It’s better than nothing when cooking with randos, though you’re probably better off sticking to Skype or Discord when baking with buddies.

Got any friends you never want to see again or a romantic relationship that needs ruining? Simply play a few rounds of Versus Mode and we promise you’ll never have to see them again! Forged in the flames of Mount Doom, this manic mode plays a lot like a deranged episode of Iron Chef, pitting two teams in a cook-off of whimsy, wits, and incessant backstabbery. Do you concentrate on your own dish or sabotage others by stealing their ingredients? Be respectful of your competitor’s workspace or shove them deep into the dark abyss below? Hey, it beats the pain of talking to them openly and honestly about your feelings. 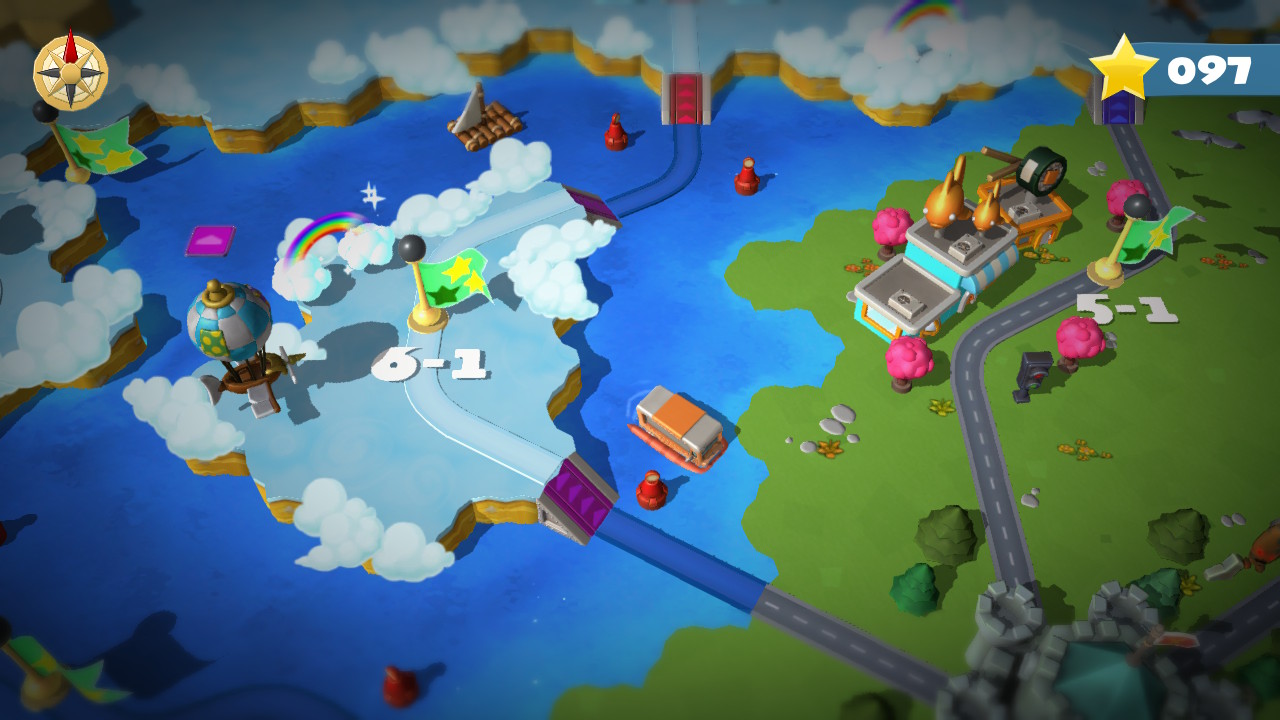 COME FRY WITH ME

Overcooked’s second course is nothing short of five-star cuisine. The chaotic cooking, spiced up gameplay, and buffet of new recipes blend together into one of the meatiest couch co-op experiences this side of the Onion Kingdom. The addition of online multiplayer plants the cherry on top, cementing it as a game every Nintendo Switch owner needs on their digital menu.

So what are you waiting for? Sharpen your knives, channel your inner Gordon Ramsay, and chop on over to the Nintendo eShop today! If for some reason you need further convincing, make sure to check out last week’s Overcooked 2 preview livestream — hosted by yours truly. 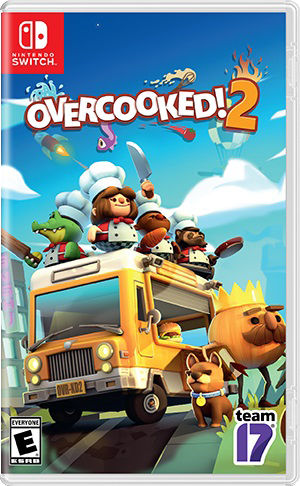