While today it’s just a mildly fancy synonym for “story,” the term “saga” originally denoted specific histories — Nordic and Germanic yarns of the past, grand tales of journeys, feuds, and heroes that shaped the present day. And while many a fantasy series or book has utilized the term for simple effect, few live up to its etymology quite like The Banner Saga.

A trilogy of bleak, somber games set in a world fraught with decay and deceit, The Banner Saga provides a chronicle worthy of its grand name, weaving together disparate characters and places into a vast narrative full of regret, sacrifice, and consequences. The third game ties up the entire trilogy with the same gravity that sustained the previous entries, giving the long tale the conclusion it deserves.

Myriad bloodstains for a cause in vain

Describing the story of the third entry in the series by and large constitutes spoilers for the previous two, so I’m going to deliberately omit any details in favor of the phrase “things are going pretty bad.” After the ending of two, characters are largely where they left off — one party struggling to hold the city of Arberrang, the other journeying to save the world. I’m aware this is a terribly vague description, but it belies something I want to make clear: this is a trilogy, through and through. You should not be playing the last entry without experiencing the previous two, for many reasons. Some may find it a detriment to the game as a standalone, but it’s imperative that you play through all three and not just this one. 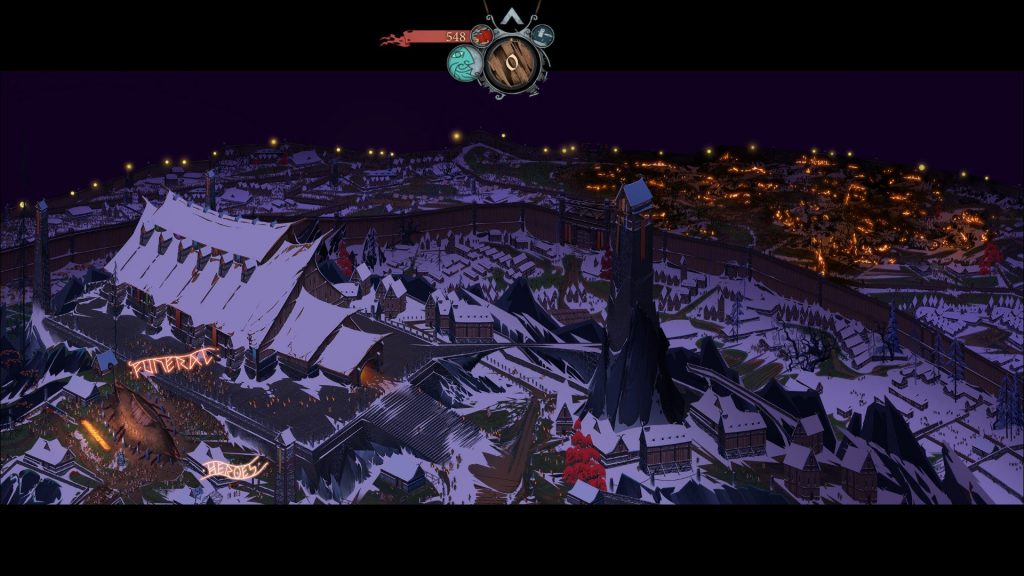 A big part of that is in what has been the series’ strongest aspect from the beginning: consequential choices. Decisions on rationing, rest, how you deal with crises, and how you treat characters carry weight, forcing you to consider your words and actions carefully. While the third entry eases up on this in certain aspects (morale is understandably in the pits no matter what, for example, so there’s no need to try and raise it), there are other ways in which the game will test your morality and quick thinking in equal accord. This is also aided by the game’s sparse save system, which often forces you to either replay large sections in order to change your mind on something or simply live with the consequences of what you’ve decided. As a game it attempts to enforce the latter, and thus proves masterful at producing feelings of guilt and regret when a character dies or your efforts are driven to naught.

And the characters are wonderful — from the driven, if conflicted main cast to the somewhat quirkier side characters, chances are you’ll find somebody to love and put your faith and resources into — which only makes the sting of their potential loss all the more real. Coupled with fantastic and thorough world-building and a plot that delivers on a rising sense of impending doom, and the trilogy leaves a story for the ages, one that captures an epic scope without sacrificing personal conflict. 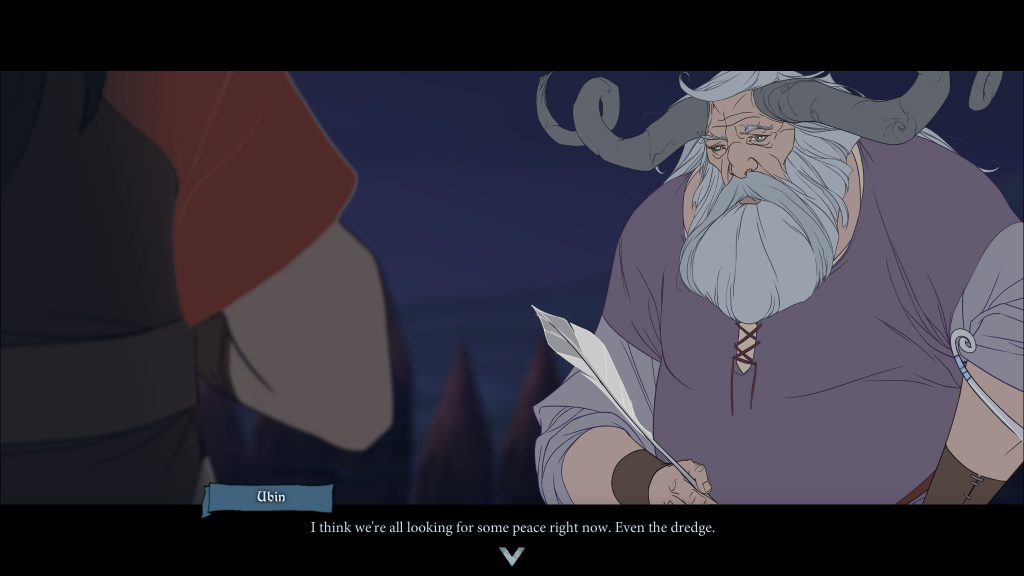 That said, it’s not a tale for everyone. The game is very dry and text-heavy, and much of the storytelling consists of simple dialogue exchanges. Coupled in with an incredibly bleak tone and only an occasional bit of humor to impart levity, and this is a fable that will leave you equally impressed and depressed. But if you don’t mind — or even like — walls of dialogue and large-scope narratives, then it’ll be perfect. Just don’t go in expecting a great deal of lighthearted antics.

2D animation seems to becoming more and more sparse these days, so it’s wonderful to see a game that uses it so much and so well. Everything in The Banner Saga is hand drawn, with colors that are saturated yet dim to convey the mood well. Character designs are varied, animations are simple yet fluid, and many of the environments are drop dead gorgeous — able to convey either natural majesty or twisted horror. Toss in the occasional animated cutscene and you’ve got a feast for the eyes no matter where you turn. 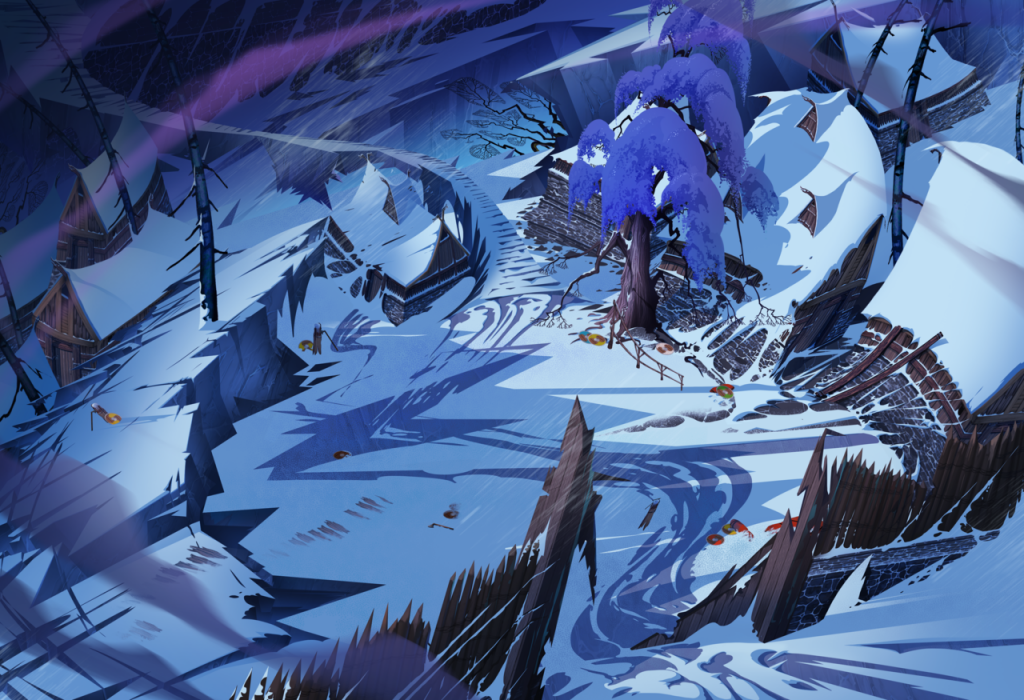 Musically, the game shoots more for muted, atmospheric pieces more than bombast or intensity, and it works for the most part. No tracks really stand out in my mind after the fact, and a number were fairly generic, but they all served the aesthetic well and never intruded on the rest of the aesthetic. Picking up the slack are the sound effects, which feel appropriately visceral — the breaking of shields, vibration of metal, and slicing of flesh are all expertly conveyed. There’s even a small bit of voice acting that adds to the characters at times.

If there was one thing about the game’s presentation that is lackluster or even poor, it’s the UI. It looks fine enough, certainly, but it was clearly designed for a mouse and keyboard on PC, and not a controller. Navigation through menus and in battle feels somewhat clumsy at times and downright unintuitive at others, to the point that it cost me tactical mistakes. You can use the Switch’s touchscreen to pinpoint certain actions, yes, but the screen is just a little too small and cumbersome for my pudgy little fingers to manage. There are even times when the text on screen is cut off! This is the only big sore spot I had with the entire trilogy, and I wish a bit more thought had been put into the porting.

While a good portion of your playtime in The Banner Saga will be on the decision making, there will be times when you are thrust into combat, whether it be against the stone-like dredge, opposing factions of men, or something much more eldritch. Battles are your standard strategy RPG fare, with a ¾ view tile based system. Turns always alternate between the player and the enemy, giving equal actions no matter how many units each side has (at least, until you get down to one — then defeat is all but assured). 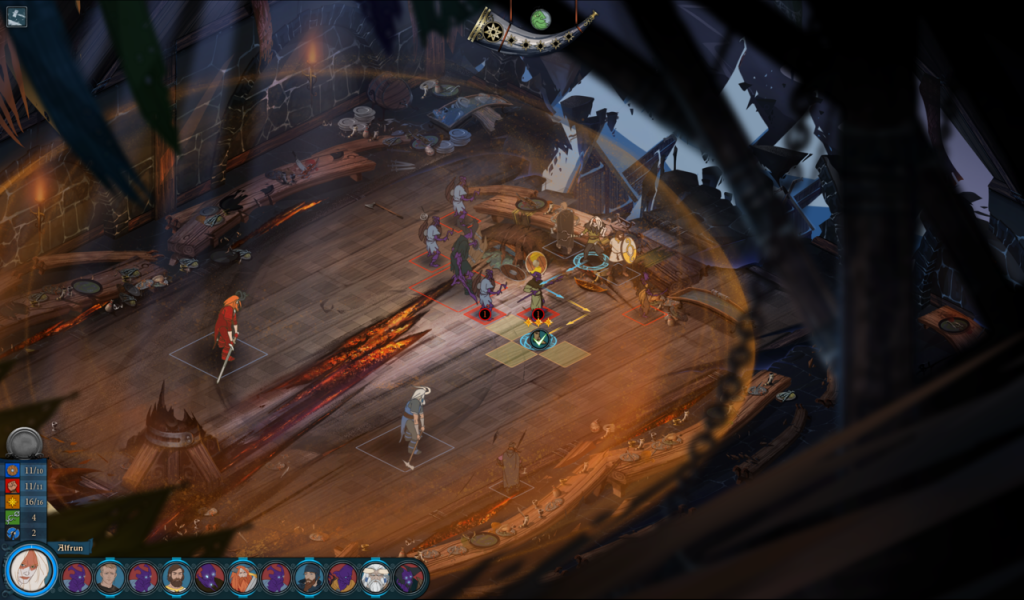 The main draw of the gameplay is in its strength/armor system. Essentially, a unit’s HP is also their attack — the closer you bring them to zero health, the less damage they’ll do. In turn, armor lowers how much damage you can do to them at once. Thus you have to consider options: Do you strike the enemy’s strength to lower their damage output, or break their armor so the rest of your forces can finish them off? In this manner even heavily wounded units can contribute by breaking armor, forcing you to stay on your toes and adapt accordingly. This simple dichotomy, coupled with unit types ranging from burly shieldbearers to long-ranged archers or varied weavers (mages), lends to a battle system that is difficult but rewarding.

Your characters and levels carry over between games, as before, but there are a couple new tricks this time around. Upon reaching level 11 you can bequeath titles to your super soldiers, giving them even more benefits than their maxed-out stats allow. There’s more classes and abilities you can utilize this time as well to add in layers of strategic depth, like calling in reinforcements of your own. There’s nothing radically different between each game, but the spice of new classes is enough to sustain one’s interest.

Between your limited resources, the potential of injury to your best fighters, and an ever growing chance that your star players might keel over due to story events, battles can be quite tough, especially this time around. Fortunately, you can change the difficulty whenever you please on the pause screen to give yourself an easier go, or make it even more of a challenge to get through. While I find the story bits more compelling, the battle system is certainly fascinating enough to hold your interest. 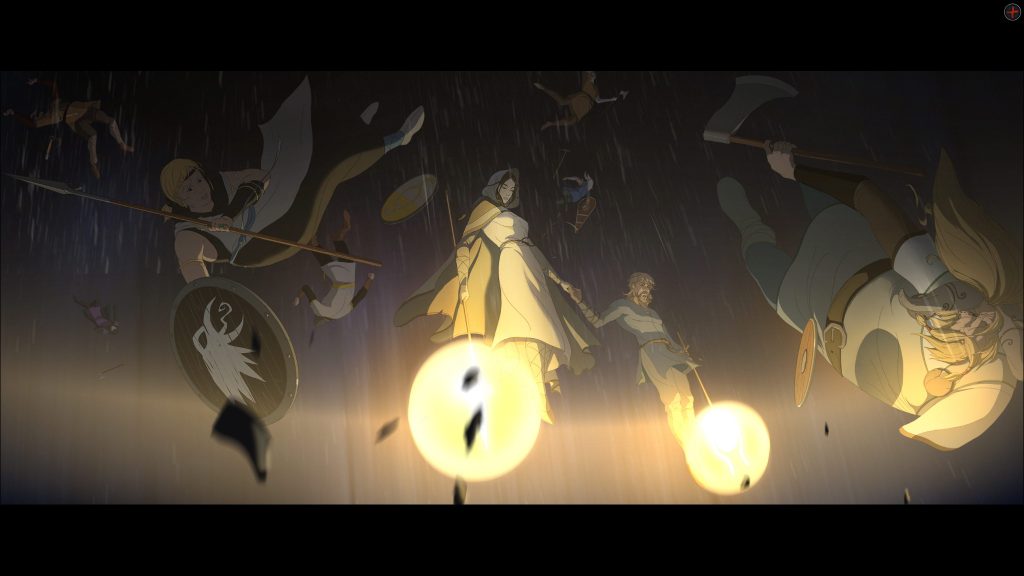 The land will mend, as the tale must end

Each entry in The Banner Saga Trilogy lasted me about eight or nine hours in total (note that I read quite fast), adding up to a solid 25 hours of content across the three games. At around $50 for all three games (you get a discount on the third if you own either of the previous two), that might be a bit steep for some, but I can only imagine how much replayability the game has — the amount it tracks in regards to your decisions astonished me, and I’m already itching to give it another go from the very beginning and see what changes.

Some games can’t do everything at once, but excel at what they set out to accomplish. The Banner Saga trilogy attempts to craft a magnificent story where a player’s decisions have weight, forcing them to consider the burden and effect of their agency — and in that goal, it succeeds. Despite being a bit rough around the edges (there were a number of tiny technical issues I had, mostly graphical hiccups), the folks at Versus Evil and Stoic have made a finely crafted game that fulfills its niche well.

For the story-focused gamer, and one who doesn’t mind a bit of slowness here and there, The Banner Saga is an easy recommendation. Those more concerned with mechanical flexibility or freedom will probably be a little more sour on it. But if you’re willing to hunker down for a tale of misery and gray, then listen to this reviewer’s words, and play. 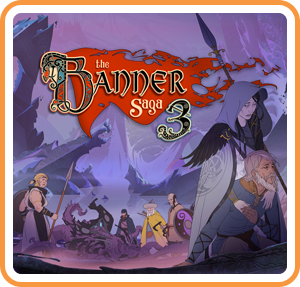