Captain Toad: Treasure Tracker was one of Wii U’s best kept secrets when it originally released back in 2014. Now, with its port to Nintendo Switch and 3DS, the game gets a second chance — this time with a much larger user base to support it. If you didn’t catch Toad and Toadette’s crazy adventure the first time around, I’m excited to report that this happy-go-lucky puzzle box journey is well worth experiencing on Switch, even if it doesn’t control quite as well as its Wii U predecessor.

Captain Toad and Toadette’s adventure takes you through 64 diorama levels, along with 18 bonus stages, each with its own unique style and hook. Some tasked me with traversing across the beep blocks from Mario 3D World, a couple took me on thrilling mine cart rides, and others had me rapidly firing turnips out of a cannon at waves and waves of Hammer Bros.

Every level offers something unique, but each is similar enough to make Treasure Tracker feel like a focused, balanced experience. The goal of the level always remains the same: get to the goal to grab the Star. Levels never feels stale, and that’s thanks to the fantastic, varied level design and the numerous ways Toad and Toadette can interact with the world. 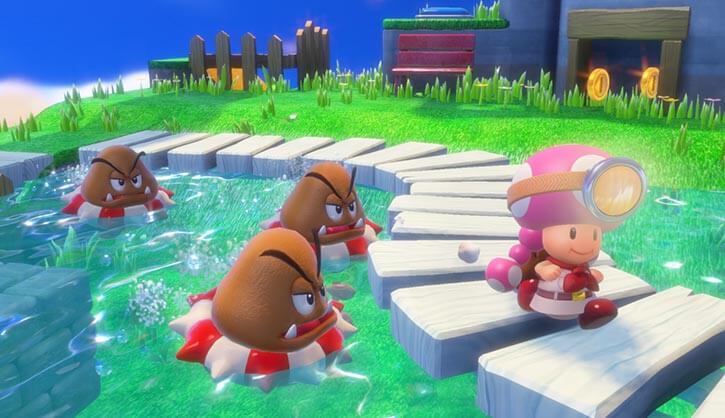 Captain Toad and Toadette can’t jump, which forces you to completely rethink traversal in a Mario game. Want to simply hop up a ledge to grab that coveted Star? You can’t. Instead, you have to climb a ladder to the top of a tower, throw turnips from the ground to knock out foes in your path, and step on a P Switch to lower the Star to ground level. Not being able to jump makes you play the levels the exact way the designers intended, which leads to some extremely satisfying puzzle solving moments.

Captain Toad: Treasure Tracker sells for only $39.99 on Switch, but you’d never be able to tell based on the huge amount of content in the game. All 64 main levels have three hidden gems to find, a Pixel Toad to play hide and seek with, a speedrun time to outmatch, and a special achievement unique to that level’s playstyle. In my 100% run of the game back on Wii U, I got to revisit each level numerous times, with a different purpose every time I was there. 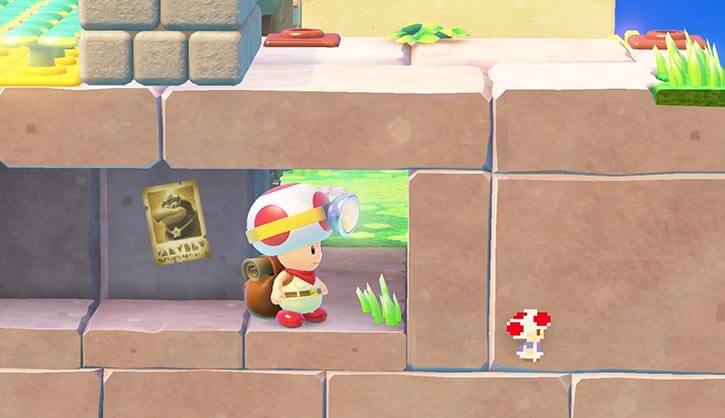 Some levels challenge you to not get noticed by any enemies. Suddenly, Captain Toad has to stealth his way through corridors to reach the end. Then, when I went back for to beat the speedrun time, I blazed past enemies without a care in the world. It’s amazing how Treasure Tracker manages to keep the same level fresh just by handing you a different objective. It took me just under 30 hours to 100% complete Treasure Tracker on Wii U, which is an outstanding amount of content for $39.99.

Unfortunately, I think the Switch version of Captain Toad is inferior to the original Wii U version. While the content is almost identical, there are a couple of wonky decisions from a control standpoint that hamper the experience. The Wii U release relied heavily on the Wii U GamePad. Spinning wheels, moving platforms, and aiming cannons were all made better by the second screen, and that absence is felt in the Switch version.

A blue cursor constantly hovers over the screen while playing in TV mode, which is moved with motion controls whether you’re using the Joy-Con or Pro Controller. The motion works fine, but the giant cursor was always distracting me from the gorgeous visuals Captain Toad has to offer. This is fixed in handheld mode, where touch screen controls are enabled, but it’s still disappointing that the TV experience feels like a downgrade.

The mine cart levels suffer the most. On Wii U, your TV displayed a wide screen of the level to scan for collectibles, while the GamePad displayed a first person view to make aiming your turnip shots easier. On Switch, you have to choose between first-person or a behind-the-back shot of Captain Toad. I couldn’t ever see as much of the level as I wanted to, which is disappointing since the mine cart levels have some of the biggest spectacles in the game.

One new feature is two player mode, which is a pretty big disappointment. Using split Joy-Con, one player controls Toad, while the other fires turnips at enemies and controls the camera. Camera control is one of the most important elements of Captain Toad, as it almost never moves on its own, so it’s constantly up to the player to adjust the view to their liking. Separating movement and camera control between two players is awful in execution. Unfortunately, timed camera movements can easily cause unfair deaths, and that makes this mode nearly unplayable. 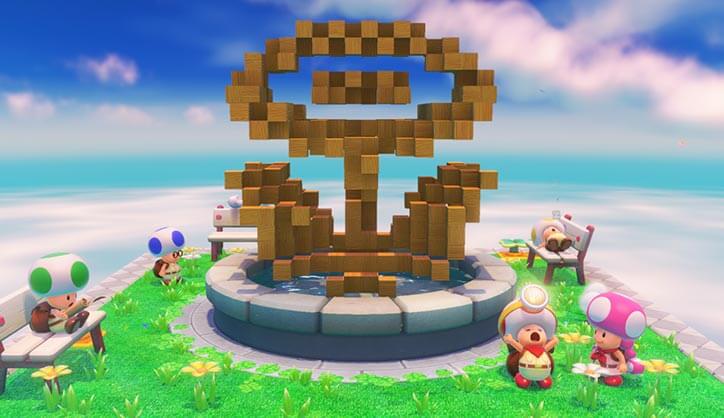 The amiibo support has been updated in the new release. The Toad amiibo used to unlock the Pixel Toad hide and seek mode, but that is now just built into the base game, which adds even more value compared to the original. Now, your Toad figure unlocks an invincibility mushroom, which will help you get through any level you’re having trouble with. Most other amiibo grant 1-Up mushrooms, but the Super Mario Odyssey line of amiibo unlocks the Odyssey-themed levels early, which I’ll get into now! 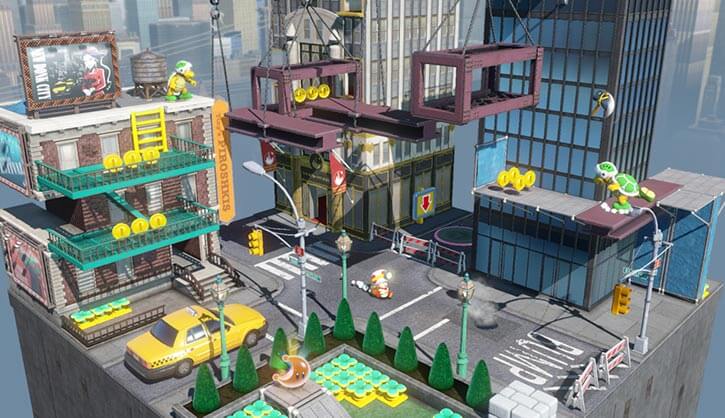 The Sand Kingdom features touch stone blocks throughout, as well as an appearance from the upside down pyramid. New Donk City takes Captain Toad underground to restore power to the city, and through City Hall to find the hidden Golden Mushroom. The city and the desert both look beautiful, and it’s awesome to see downsized versions of the sprawling kingdoms we spent hours exploring with Mario.

The Cascade Kingdom is the best mine cart level in the game, taking you through the beautiful waterfalls and rock formations featured in Odyssey’s jurassic world. The Luncheon Kingdom is a frantic, double cherry infused mad dash against Cookatiel, the murderous bird chef. Both of these levels are fantastic shakeups from the standard level design, and they each feel like great homages to their source material.

The Odyssey levels are one of the best parts of Captain Toad, but it’s disappointing that their inclusion came at the expense of the Super Mario 3D World levels, which have been removed from the game. If you already beat Captain Toad on Wii U, I’m not sure the Odyssey levels alone are enough to warrant double dipping, but they sure are a fantastic addition.

Captain Toad: Treasure Tracker was one of the best experiences on Wii U, and it’s also a blast to play through on Switch. The controls don’t work quite as well as the two screen setup on Nintendo’s last console, but that doesn’t change the outstanding level design, gameplay, and presentation. If you missed out on Captain Toad the first time around, you should throw on your backpack and headlamp right away, and start tracking some treasures on Nintendo Switch. 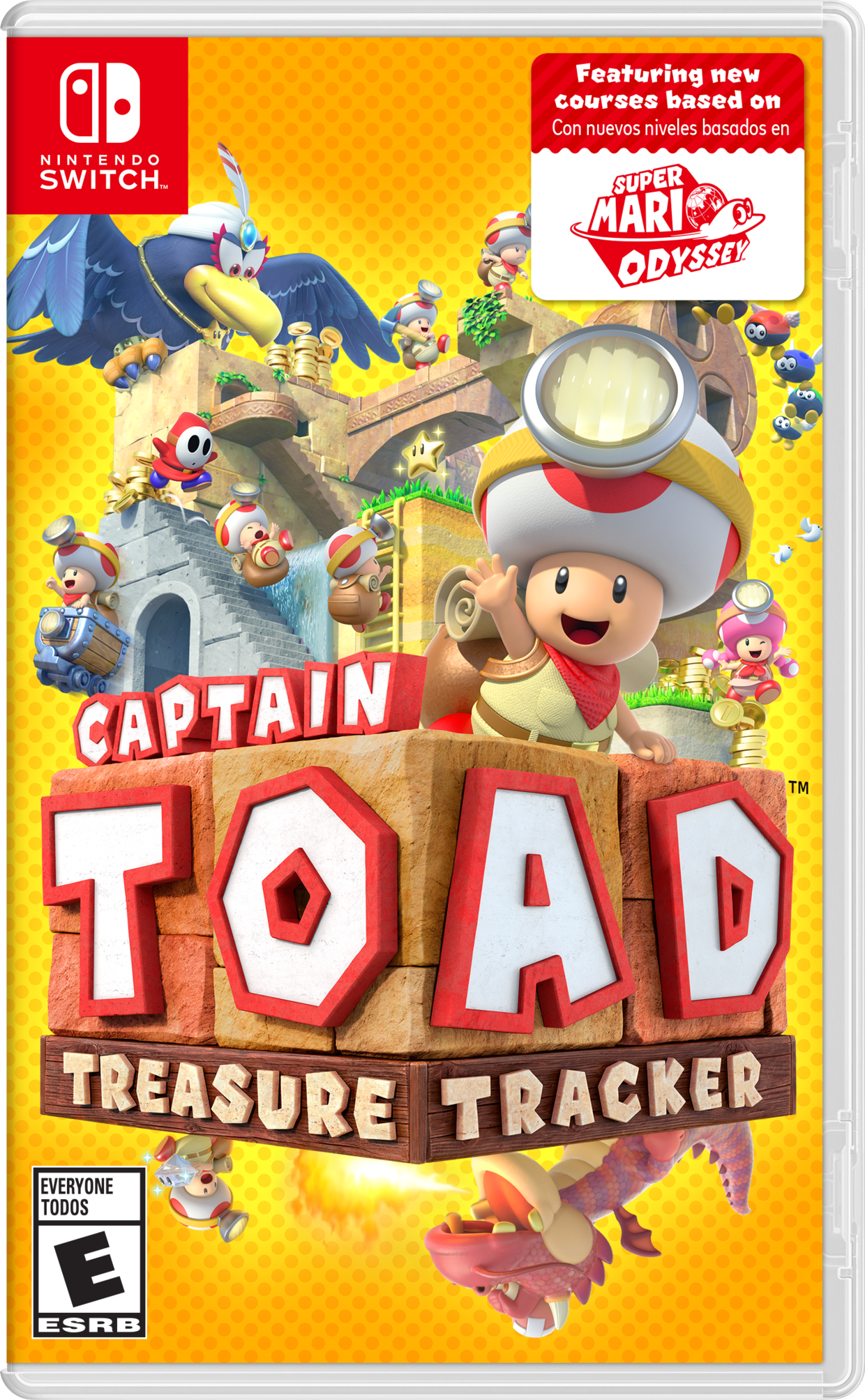