Behind the scenes: Captain Toad de-make

Captain Toad has finally made his trek to the Nintendo Switch and 3DS! To celebrate, we uploaded a new de-make last week that takes the good Cap’n back in time to the NES. I’m here to delve into the various thought processes that went into making the video, which you can watch again below:

To start, I looked at two NES games that prominently featured Toad, namely Wario’s Woods and Super Mario Bros. 2. The former I mainly drew inspiration from the game’s main Toad sprite and color scheme, while the latter’s influences are much more obvious. 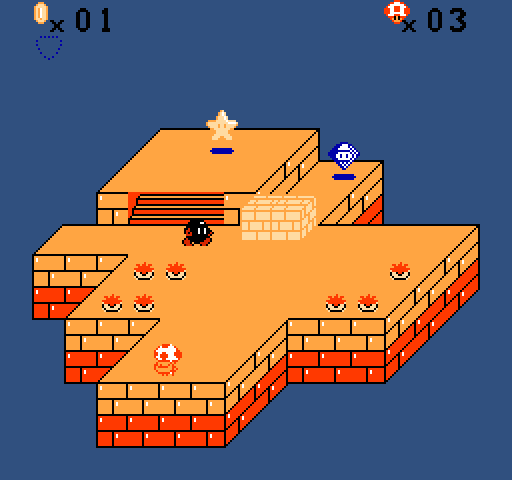 I figured, if Captain Toad is heavily based on Super Mario 3D World assets, then it only makes sense to pull themes and enemies from that game’s spiritual predecessor. So in came the green hills of Sub-Con and its inhabitants, like the Shy Guy, Snifit, and the boss Mouser.

The level select is also a callback to Super Mario Bros. 2 while still maintaining a connection to Captain Toad, as both games share a book motif.

As my first isometric de-make, it proved to be quite the different challenge, with a greater focus on angles and figuring out how to lay out the levels. Unlike the real Captain Toad, camera rotation isn’t an option, so puzzles and placements had to line up in a way that isn’t too obstructive. Likewise, depth could be a bit of an issue — something that you can notice when the Donut Lifts drop out in the first level, with the back island looking more like a tall wall. Thankfully, by the time the donut lifts drop, it’s already been established where everything stands. 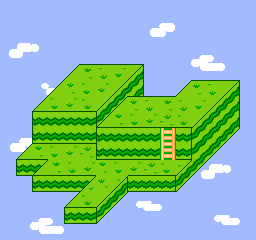 Captain Toad was an especially fun game to take back in time thanks to its very timeless mechanics. It really did feel like something they could have made years earlier.

If you’d like to take a closer look at the uncompressed assets, they’re now available via our Patreon at the $5 reward tier. As for the next de-make, I give you this small tease… Get ready for adventure!