Pocket Rumble has had a long development cycle filled with numerous delays and bouts of silence from the creators, but, luckily, it’s finally available for purchase for Switch. The game had two Kickstarter campaigns, a Steam beta, a premature release date announced during a Nintendo Indies Direct, and over a year of delays. However, now that the game has released, the Switch has yet another solid fighting game to add to its impressive roster, and for such a fair price at that.

Pocket Rumble is a traditional 2D fighting game in the vein of Street Fighter and King of Fighters. The game was originally designed and pitched as a homage to the sadly short-lived Neo Geo Pocket and Neo Geo Pocket Color, a beefy handheld created by SNK as a competitor to the Game Boy. The system is perhaps best known for a surprisingly robust library of fighting games, thanks to the various franchises SNK has produced, including Samurai Shodown, King of Fighters, and Last Blade. The games made for the Pocket systems tended to make up for the lack of graphical fidelity by using cute, chibi-inspired art styles.

Pocket Rumble immediately captures the spirit of these handheld fighting games, both in terms of graphics and sound. The characters all have distinct personalities and styles, and the chiptune-filled soundtrack and sound effects instantly reminded me of the days of the Neo Geo Pocket Color and Game Gear. In terms of being a tribute to a beloved, though somewhat obscure, genre, Pocket Rumble is pretty successful. 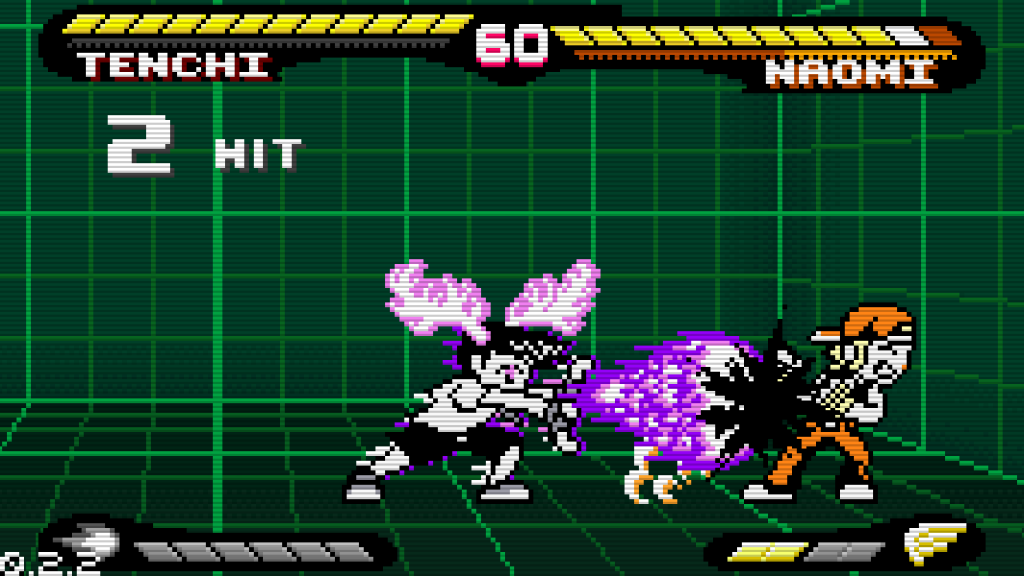 Pocket Rumble is another addition in the growing “beginner-friendly” fighting game genre. This particular sect of the genre has seen many games released or announced recently. The Switch itself has had several titles from this group pop up, including BlazBlue: Cross Tag Battle, Fantasy Strike, and Dragon Ball FighterZ. Many developers, from indies to established studios, are looking to remove some of the barriers that prevent more people from getting into fighting games, such as complicated combos and inputs.

Rumble is among the simplest of these games in terms of design. It has eight characters, and each has exactly four specials, two jumping attacks, and four normal attacks. The game, inspired by the Neo Geo Pocket Color, only uses two buttons, although you can map certain functions to other buttons. The actual inputs for the special attacks are performed by pressing diagonal down and left or right plus a long press from one of the attack buttons — this is universal across characters, meaning you can immediately pick up a new character and know how to perform their special attacks. Matches are fast-paced and frenetic: the game heavily favors offense, and matches can sometimes last only a few seconds if you get an opponent in the corner. The speed, once you get a hang of the game, is immensely satisfying. 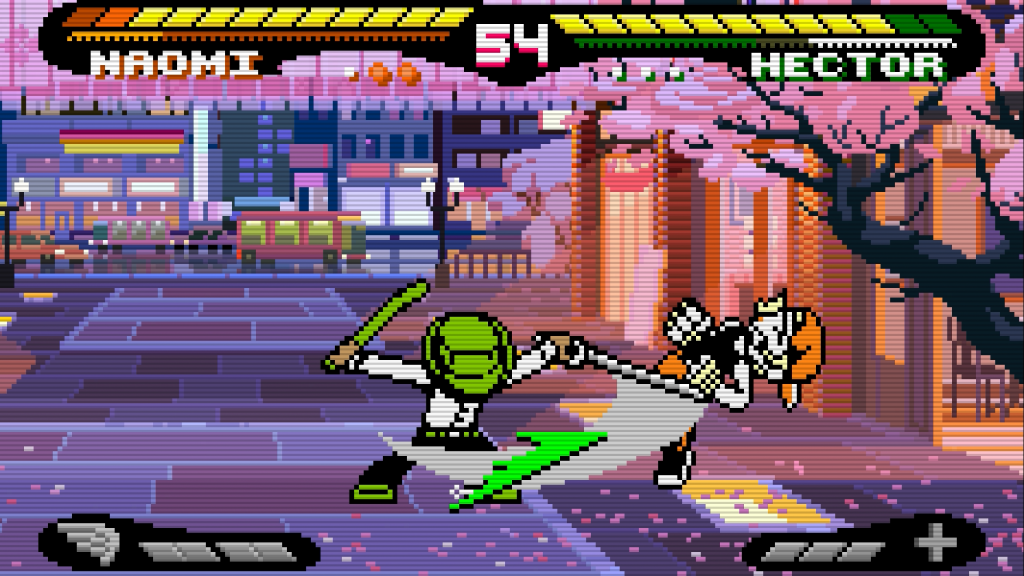 The characters themselves, though small in number, are all quite unique in their designs. Each one, in addition to their four special moves, has their own movement technique and super meter. For instance, Tenchi, the most straightforward Street Fighter inspired character, can dash and gains meter for each special move used, which allows him to use a super fireball. Meanwhile, Quinn can do a long range hop and use his meter once per round to turn into a speedy werewolf.

All of the characters are simple, yet unique enough to differentiate themselves from each other. Every character feels like they’re based on different fighting game series, which I honestly think is a cool idea. Naomi is clearly inspired by SNK games with her ability to run and charge her super meter manually, and Keiko and her demon cat Q are reminiscent of puppet characters like Carl from BlazBlue.

Even though the roster is small (though DLC characters are coming), it feels good to jump from character to character. This is made easier by the game allowing the loser of each round to change characters before the next round starts. It’s definitely an interesting and exciting design choice that lets you learn which matchups are best for each character. 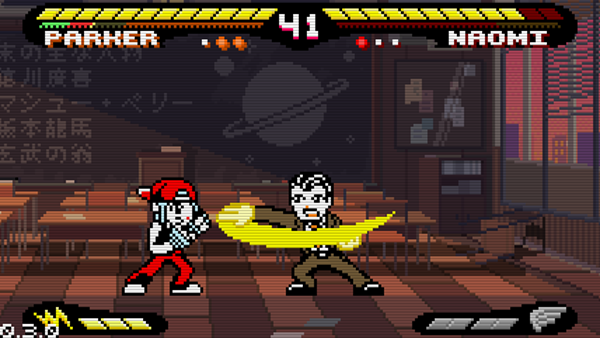 Pocket Rumble is a very straightforward game in terms of gameplay, presentation, and features. The tutorial mode teaches the features of the game and some basic fighting game concepts, as well as character-specific lessons, but when it comes down to it, they’re all too short and contain far too little explanation. When you complete a lesson, it doesn’t even finish the animation of the last move you do before opening the menu. I appreciate having a lesson mode, but it really needs to be fleshed out more, especially for a game that posits itself as a beginner fighting game.

Unfortunately, there’s no story mode, or anything too substantial for a single player. And while it’s nice that arcade and career modes are available, they essentially just give players an endless parade of CPU’s to fight. I certainly don’t blame the developers for not including any sort of story mode for budget reasons, but the game overall feels light with its content without one. 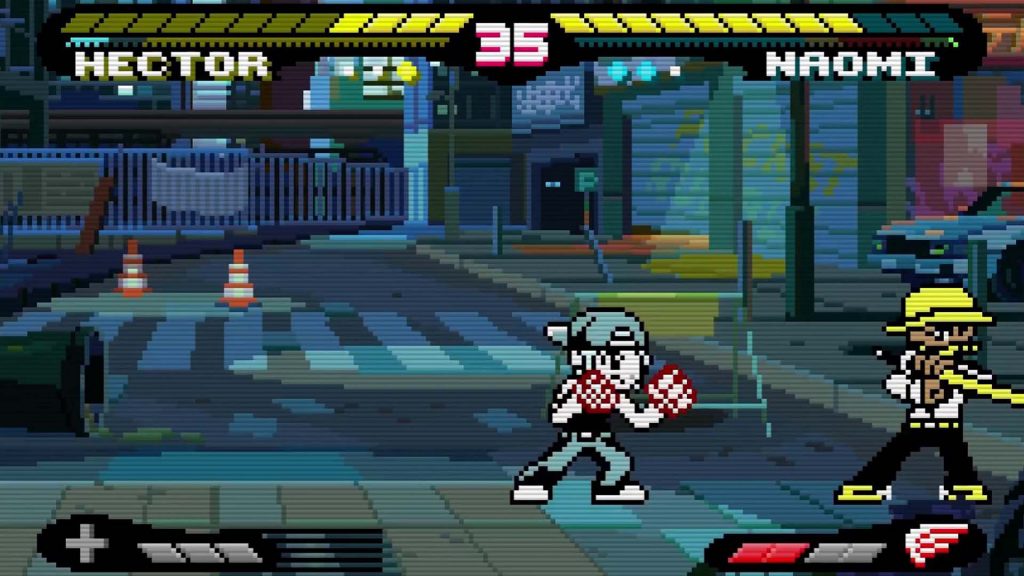 The game’s real highlight is its online play. Pocket Rumble uses an online middleware called GGPO, which is a “rollback” netcode. This gives online matches less slowdown in exchange for the occasional frame skips in matches with poor ping. The end result is much smoother online matches than the underwater lag that can result in games like Street Fighter 30th Anniversary Collection. Finding matches is quick, and there’s very little loading that takes place. I do wish there were more robust profile options, like picking a title or ID card when playing online, but it plays so good that those details barely matter. In the long run, I certainly hope more fighters in the future utilize GGPO.

Pocket Rumble has been a long time coming for Nintendo Switch, but it was worth the wait. It may have started as a tribute to older handheld fighting games, but what we got in the end is a unique take on the genre that plays unlike almost any other game. While it’s certainly light on features and presentation, its smooth online suite and snappy game flow make it easy to have “just one more match” turn into an hour of online fights.

I’d also like to point out that the game’s price of $9.99 is a steal. So if you want some fast-paced fights on the Switch’s best online system for less than a Hamilton, be sure to pick up Pocket Rumble. 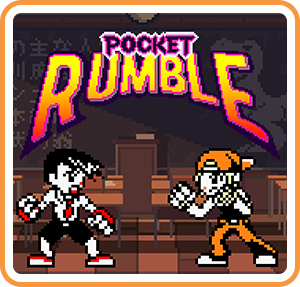