When it was announced with brief footage at the Switch reveal event in January 2017, I was immediately interested in Octopath Traveler. With a unique art style, a focus on a wide cast of characters, and the knowledge that it was being handled by the Bravely Default team, the game seemed poised to take the JRPG crown on the Switch. And while the title will no doubt be hard to contest, with less than a month to go a new demo has released that lets you try out any or all of the game’s intrepid eight protagonists.

And that’s exactly what we’re going to do. Over the next couple weeks I’ll be offering impressions of the demo, trying out each character and seeing how they compare and contrast in a lead-in to the full game’s release on July 13th. So without further ado, let’s recount our first encounters this time around, shall we?

Having played through the previous Octopath demo (with Olberic and Primrose) many months ago, I carefully weighted who to try first this time around. I eventually settled semi-arbitrarily on Tressa, a youthful merchant tasked with inheriting her parents’ business. One day, a run-in with a charismatic trader and a group of bandits spurs her onward, and she decides to set off on her own adventure. It’s a setup so uncomplicated and simple that it becomes charming, helped by Tressa’s own endearing youthfulness and the personality of those she interacts with (which seems to be a strength of the game in general). 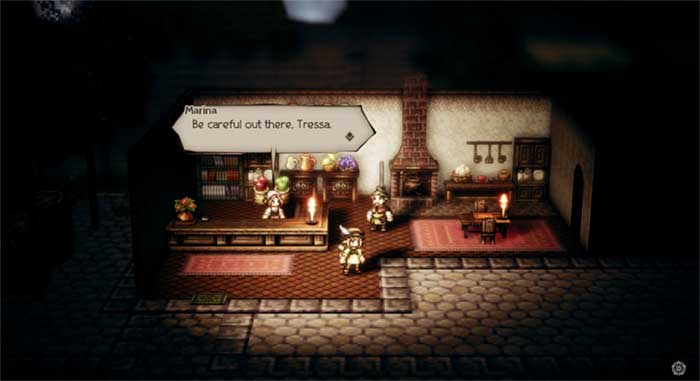 Tressa’s Path Action (a unique skill that each character possesses that allows them to interact with NPCs in particular ways) gives her the ability to buy items from townspeople, as well as find money just walking from area to area. These abilities complement each other well, of course, though what the townspeople had for sale varied wildly — some of it was basic, useful consumables, and some was just vendor trash that you could paradoxically purchase for yourself. I imagine some of the more interesting interactions will come later in the game, but for the moment it seems like a nice way of getting certain items for cheap.

In combat, Tressa uses spears, bows, and wind magic. Early on, the only real distinguishing factor between the various weapon types appears to be what particular enemies are weak to: hitting an enemy with their weakness enough times will Break them, removing one of their turns and lowering defenses. This is where you use the game’s Boost system (which is somewhat similar to the Brave/Default system from… uh, Bravely Default) to score multiple hits or boost magic damage. Strategy is simple — Break the enemy, unleash your Boost to maximize damage — though there’s also the possibility of mixing things up by spending your Boost to constantly Break the enemy so they can’t get a turn in. (That’s a lot of capital B’s!) 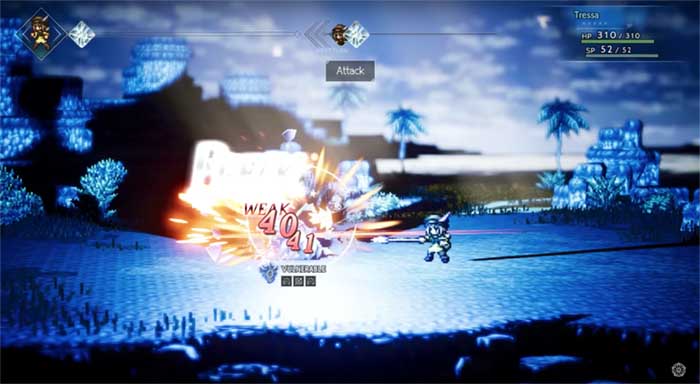 For my second demo run-through, I decided to go with Therion, the game’s resident thief archetype. His story begins with him attempting to break in to the local Ravus Manor, where a supposedly super-secret and valuable treasure is stored. Confident in his abilities, he manages to sneak in past the guards, but gets intercepted by the local butler, and is subsequently cuffed with a bandit’s mark of shame — a sign that he’s been caught red-handed, and that his skills are unsatisfactory. The lady of the manor offers to remove the bracelet should Therion help her find the other gemstones that match the manor’s treasure, and he reluctantly agrees.

Therion’s story is a bit harder to summarize because it’s notably more complex than Tressa’s — it includes flashbacks to his youth and his partnership with another boy, and overall paints a picture of a more complicated figure. Therion, like Tressa, manages to have a very notable character presence, but rather than being likable and endearing, he’s a bit of a righteous jerkwad, if an entertaining one. The contrast between the two narrative set-ups is night and day, but they both manage to be compelling in their own way. 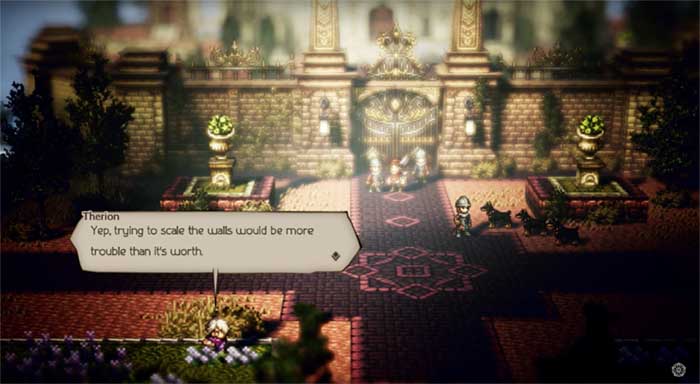 Therion’s path action is, as you might expect, thievery — he has a percentage chance of stealing whatever he’d like from the townsfolk. Succeed, and it costs you nothing, but if you fail your reputation in town suffers. I deliberately chose him second because his action was reciprocal to Tressa’s — both can acquire items from people, but one requires money to do so, and the other doesn’t but has a sense of risk in the process. It’s a little difference, but one that I suspect will make a big difference in the long run.

In battle, Therion uses swords, daggers, and fire magic. His initial segment and dungeon were overall similar on a structural level to Tressa’s, and I’d imagine most of the other protagonists’ are the same as well. Given that it’s meant to let you start the game off on the right foot, I’d imagine you’d have to play farther in the demo to get to more diverse locations and places. But we’ll just have to wait and see. 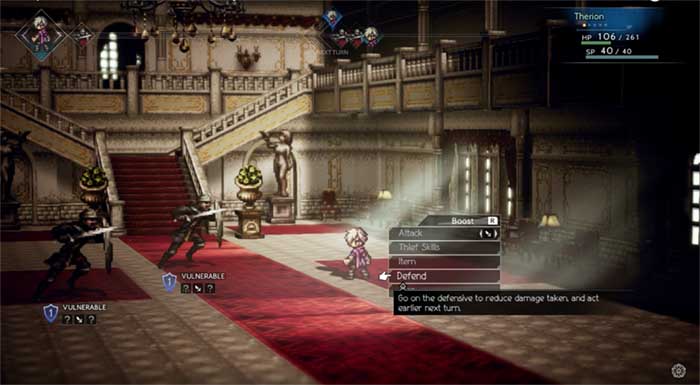 We’ve only covered two of the initial set-ups so far, but already there’s a lot to love about Octopath Traveler. I’m excited to see how Olberic’s and Primrose’s stories have been edited in the months since the first demo, as well as to see the other four tales begin in earnest. There’s also lots more to talk about in terms of style and content, and I’m ecstatic to see where the game will go from here.

You can download the Octopath Traveler demo in the eShop for yourself right now. Save data can transfer over to the full game, so if you’re gonna pick it up in a few weeks you might as well hop on the train now.