Since Ultimate’s thrilling reveal during Nintendo’s E3 Direct, I’ve been lucky to play 16 matches of the next entry in the Smash franchise. I think it’s safe to say this isn’t just a port of Smash Wii U. The mechanics feel faster, the physics are much different, and the art style is noticeably altered. Let’s jump into my thoughts on the game! Keep in mind that we got to play an early build, so any of my impressions could be different by the time the game releases.

During my time with Ultimate, I was able to sample plenty of the roster available in the demo. I chose Inkling in my first match to see how the Splatoon influence translated to the Smash world. I’m very happy to report that I love how the Inkling played. I felt very competitive as the Squid kids, even though I had never played as them before. Plus, the countless homages to Splatoon made playing as them an absolute joy. 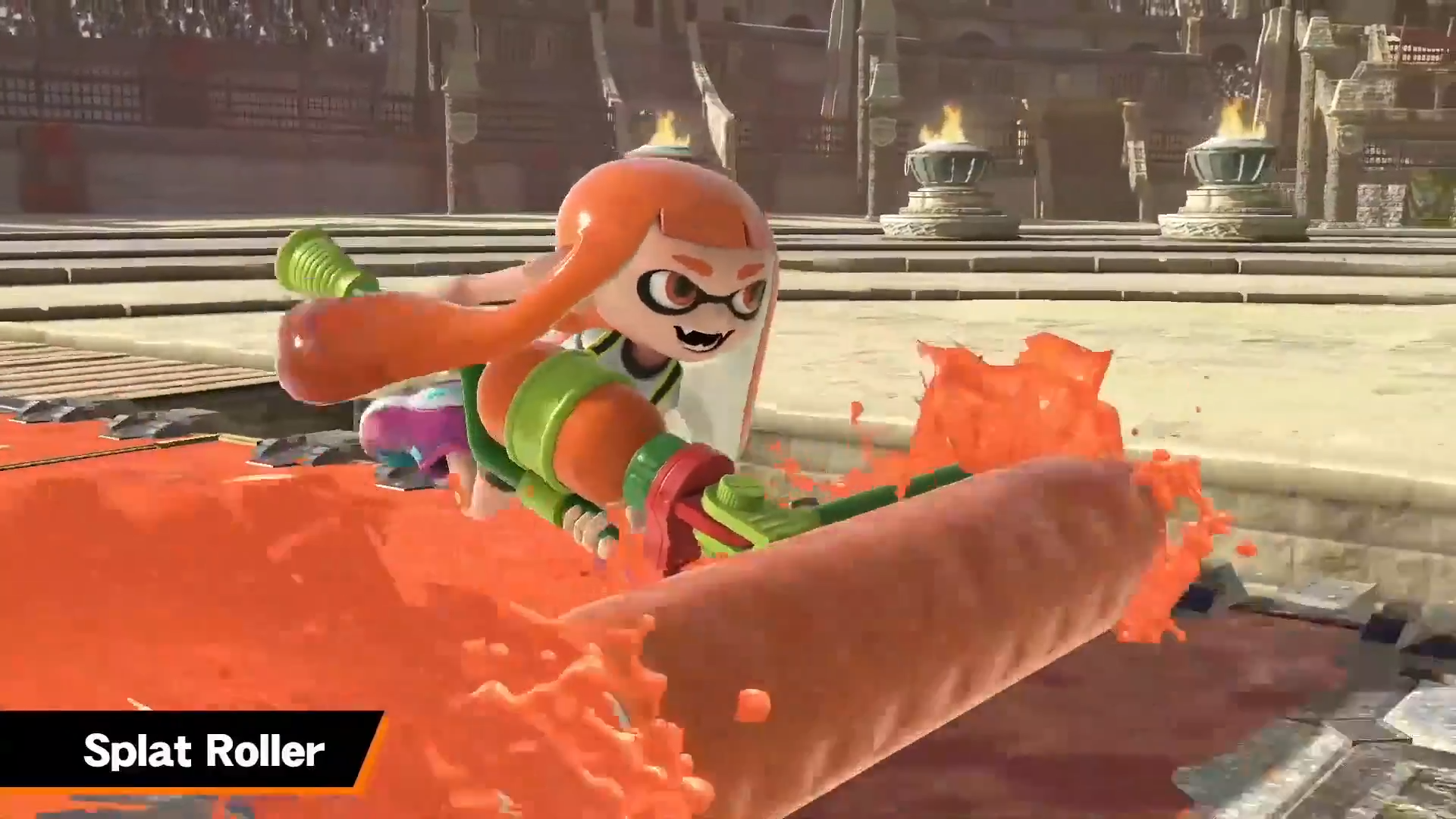 The Inklings utilize a variety of weapons from Splatoon 1 and 2. The neutral special move is a Splattershot. It doesn’t do much in the way of damage, but it completely soaks the other fighters in ink, which actually increases the damage that the other attacks inflict. The ink you spray on other fighters has a time limit, so a lot of strategy goes into timing, since you want to execute a heavy attack shortly after soaking your opponents.

The down special is an ink bomb which, just like in Splatoon, uses up a lot of your ink gauge. That’s right- you even have to manage your ink levels and reload by swimming in the ink if it gets too low! Sakurai, you continue to amaze me.

Anyways, the other special attacks also feel perfect for the Inkling. The side special is an ink roller that buries your opponents like a pitfall trap when you run over them. I loved comboing this with the side smash attack, the inkbrush, to rack up damage on my foes.

And lastly, the up special is a squid jump, which has the exact same arc as it does in Splatoon. Plus, Moray Towers is an awesome new stage that respects the source material perfectly. Playing the Inkling evoked a lot of the same strategies that come with playing Splatoon. Smash’s ability to combine franchises into one cohesive fighting game continues to astound me, and the Inklings are a perfect representation of that. 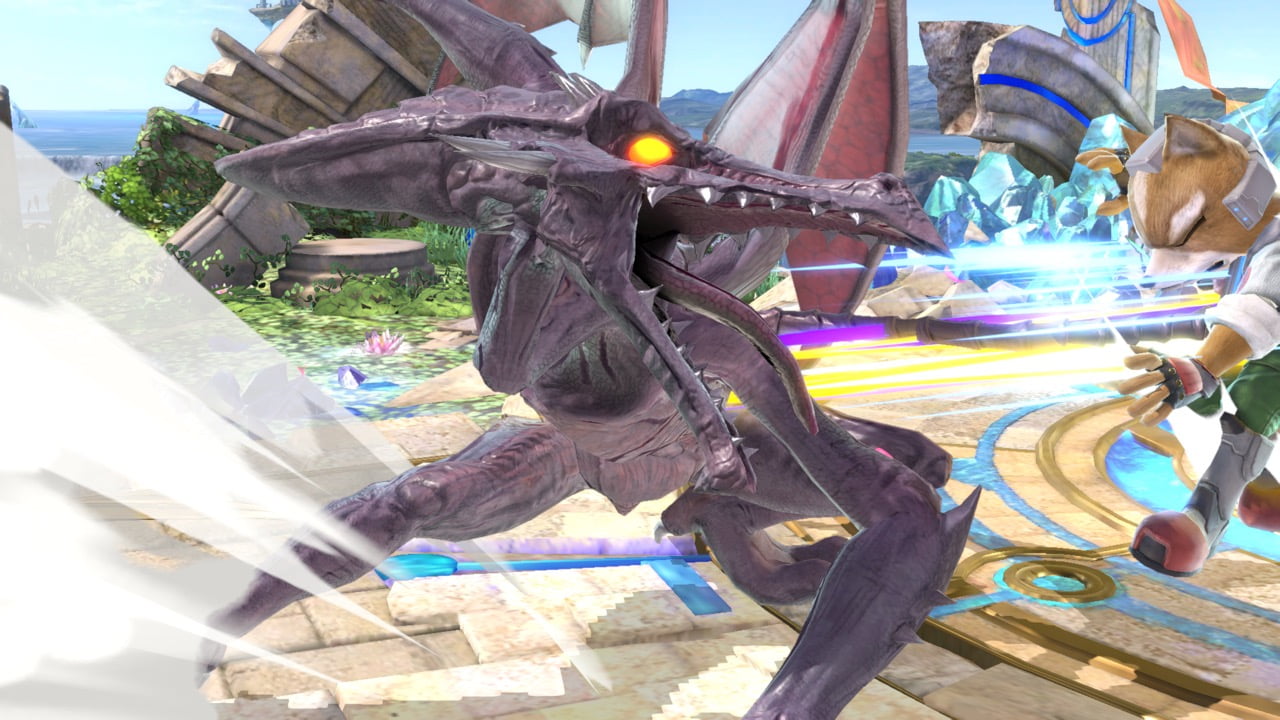 I also sampled Ridley during a couple of my matches. I didn’t immediately connect with Metroid’s vicious villain like I did with the Inklings, though Ridley does feel very powerful. I found myself launching other players pretty far using his dash attacks. I didn’t win any matches as Ridley, so I’ll have to put a lot more time into him once I get my hands back on the game.

Kirby, Ness, Cloud, and Bowser are four of my favorites in Smash Wii U, and they feel largely unchanged in the current build of Ultimate. Kirby’s dash attack returns to the flame attack from Melee, which is very welcome. It packs a punch, too – I even got a few KO’s with it.

Link and Zelda underwent major aesthetic changes, but their movesets remain mostly untouched. Zelda’s special attacks pack more of a punch than they did in Smash Wii U. Din’s fire is a lethal long range choice, and it’s great to use while maintaining spacing during the neutral game.

Link’s arsenal now reflects the tools he used in Breath of the Wild. The gale boomerang has been replaced with a standard one, and his bombs are now the runic explosives he gained on the Great Plateau. I had control of when my bombs detonated, but other projectiles and fighters could set them off with enough impact. One change fans might lament is the removal of Link’s hookshot. His grab is standard now, making recovery a little more difficult. Link and Zelda felt good, and I think anyone who has enjoyed them in the past will be happy with their Ultimate builds. 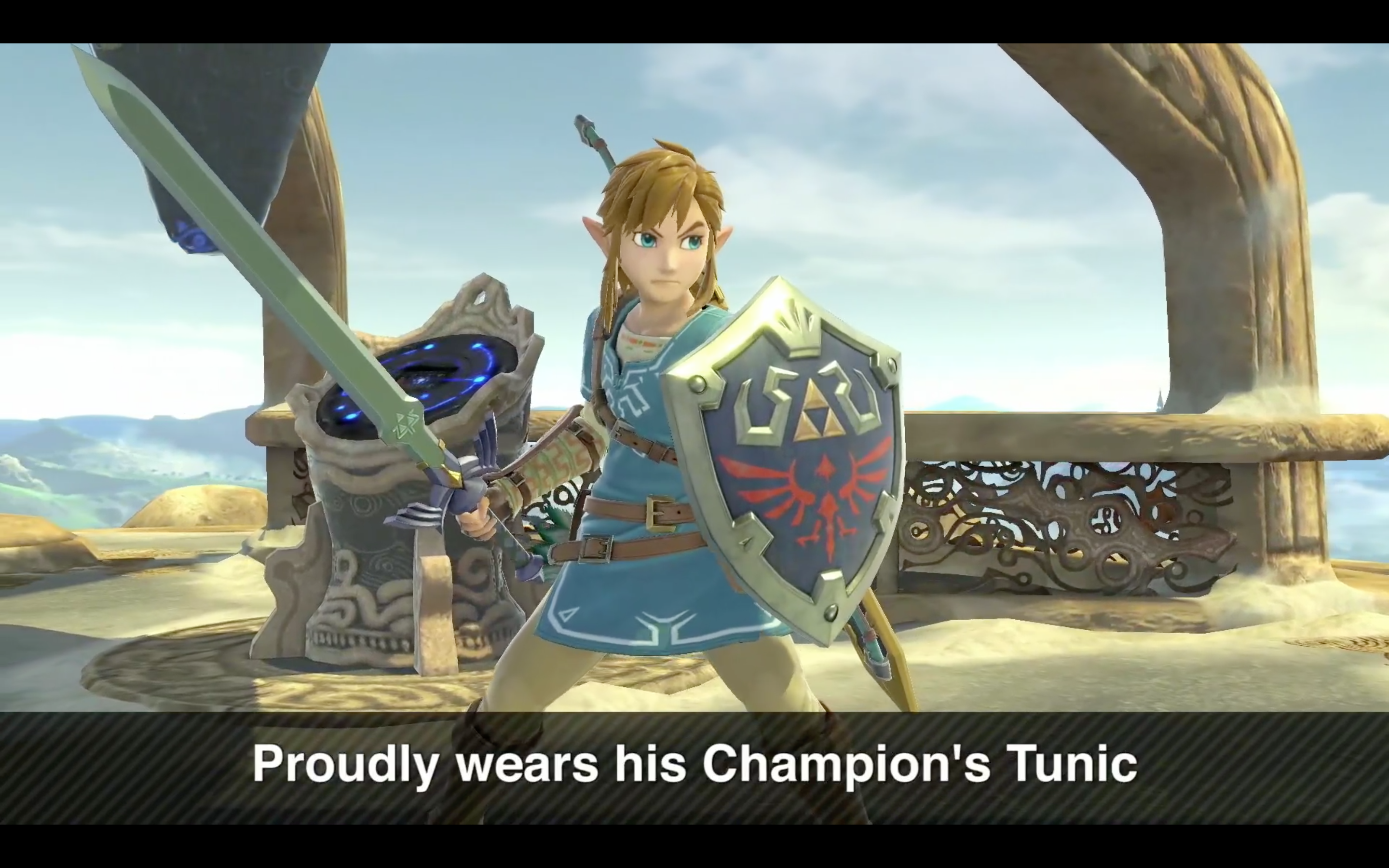 Smash Wii U landed right in the middle of Melee and Brawl from a speed standpoint. I would say that Ultimate finds the middleground between Melee and Wii U. The characters move faster than they did in the latter version, but they don’t approach the blazing speed that Melee is known for.

I noticed that the slower characters seemed especially sped up, specifically DK, Bowser, and Charizard. This lended bigger characters a slight advantage in free-for-all in this build. I remember playing on the Great Plateau Tower, one of two new stages available in the demo, and being repeatedly spammed by Charizard’s side-special attack. Obviously I was still able to shield or dodge these attacks, but I felt it was a little to easy for larger characters to land hits given how much more damage they do compared to the rest of the cast.

Another major difference is the knockback physics. I saw someone describe it on Twitter perfectly:

I’ll elaborate a little bit further. Immediate knockback is wicked fast, and I always felt certain I was headed for the blast zone. Then, just a split second later, my character glided through the air at a pace that felt like a normal jump. Most times I was able to make it back to the stage safely. I’m not sure this change is either good or bad, it’s just different, and it will definitely take some getting used to. It sure makes the action on the screen look a lot more hectic!

Items also feel like they pack more of a punch. Constant explosions and projectiles were all over the stage, and I felt like more of my deaths were caused by items than previous Smash games. 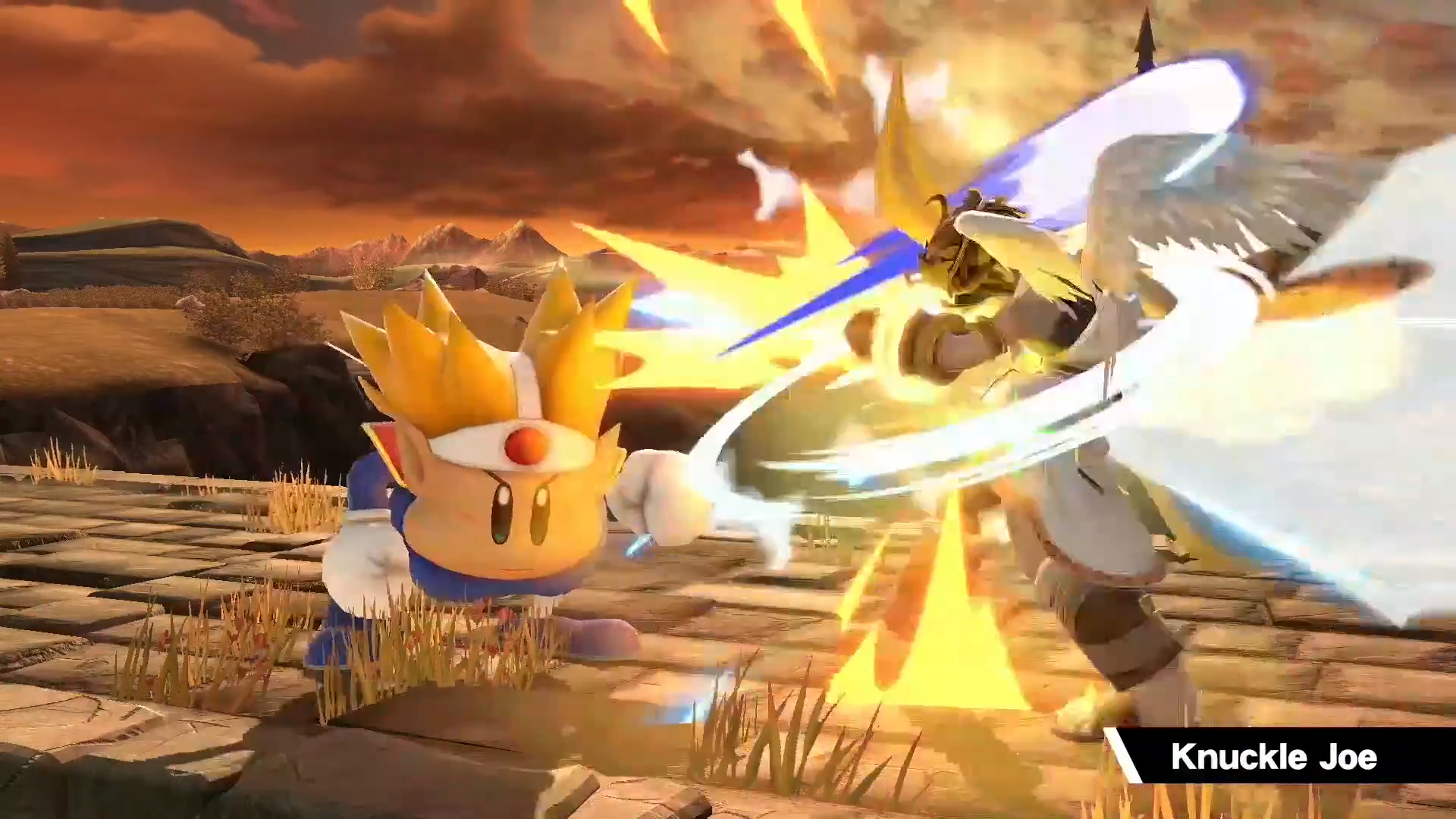 There are a few noticeable changes longtime Smash fans will pick up on quickly. The first is the blast zone indicator, which showed up in the Nintendo Direct. When you’re offstage, you can track how close you are to death, and you can properly plan your recovery. At first I thought it looked unnecessary, but I found myself constantly checking my position on the stage. When you get smashed across the stage, a trail of smoke that matches your player number follows you. With the increased speed in effect, this made it way easier to track your character within all the madness.

I adore the art direction of Ultimate. Wii U relied on bright primary colors. It really popped, but it made some of the characters from more realistic-looking games feel out of place. The art style of Ultimate feels closer to Brawl, with added textures and a more refined color scheme. Every character fits in, which is an impressive feat considering Smash pulls from franchises on every point of the spectrum.

The Smash Ball has a few new tricks up its sleeve, which spiced up gameplay more than I expected. Sometimes it rolls around the stage and players have to sprint after it, and sometimes two Smash Balls appear, and you have to quickly figure out which one is fake. I encountered a couple of Smash Balls that seemed nearly impossible to break. Sakurai mentioned he saw a few bugs in the game while watching the invitational, and I’m willing to bet that was one of them. 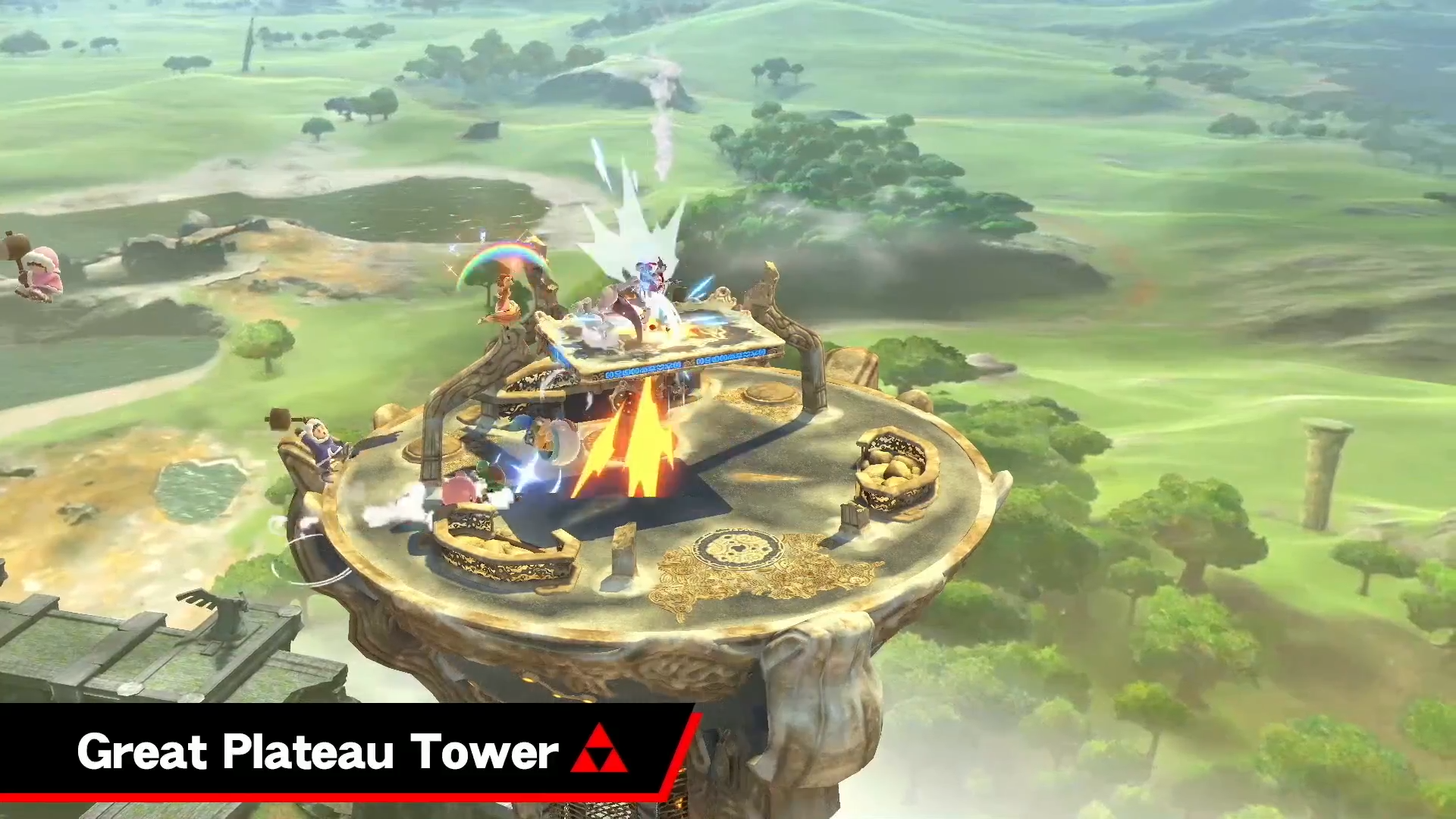 I loved my first experience with Ultimate. It is very different in some ways, but it is still pure Smash. It’s fast, hectic, and a whole lot of fun. The new characters seem great, and the old ones feel just as good as before. I can’t wait to see more from this game over the next six months! If you want to ask me any specific questions about my time with the game that I didn’t address here, please reach out to me on Twitter @LoganJPlant.