Runner3 is a rhythm platformer sequel to the Bit.Trip Runner and Runner2: Future Legend of Rhythm Alien, as well as the eighth overall game in the Bit.Trip series since the release of Bit.Trip Beat in 2009. Runner3 has CommanderVideo — or CommandgirlVideo — running straight down a path through the extremely odd world of Bit.Trip, jumping over obstacles, and dodging hazards in order to collect Gold Bars and reach the finish line.

The platforming starts off simple — just press the B or A button to jump — but as the levels progress, more moves are added to make the gameplay much more complex; hold down to slide or fast fall, kicking obstacles out of the way, double jumps, directional springs that require the corresponding direction to be held, and more. Rather than using the gameplay to make music, like a true rhythm game, all of these moves are made in time with the music, making it easier to get a feel for certain patterns during the more frustrating parts, though the timing may still be a little tricky.

Trip to the Beat

Despite the tiered introductions to the different moves, the difficulty of Runner3 isn’t the most consistent thing in the world of gaming. In the first world there are levels with sections that took me 20 to 30 tries to nail — going back to the start or checkpoint with each failure — but I breezed through to a perfect score in one shot in other levels. The repetition can be incredibly disheartening, especially since each level only has one checkpoint about halfway through, so longer levels will send you back quite far if you don’t get the pattern down. I have noticed one stage in the second world where I seem to collide with a particular barrier more often than it seems like I should, despite getting the timing down run after run, though I’m unsure if this is due to a glitch in the collision or simply frustration bias. 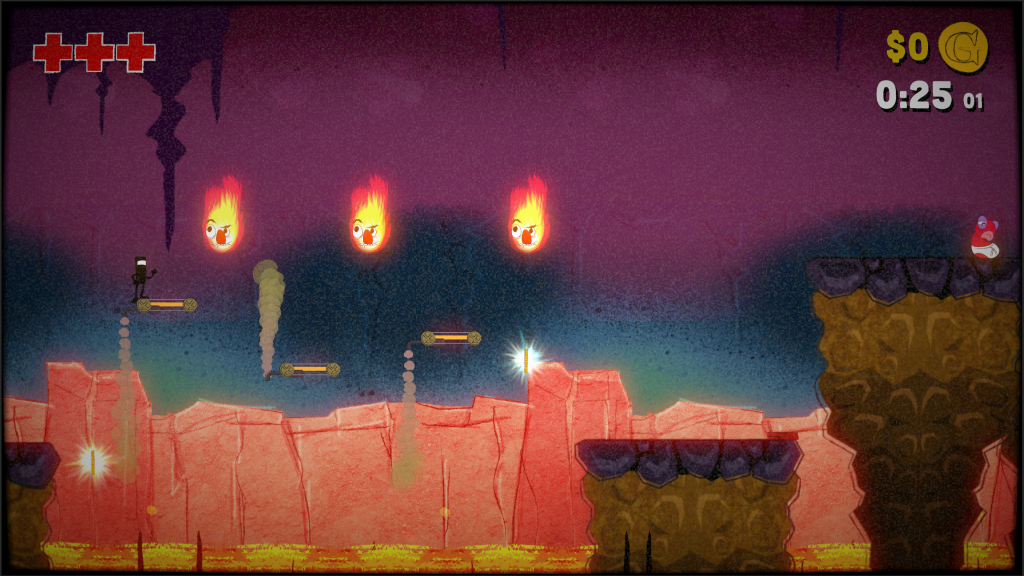 There are also nine bonus stages that are labeled “Impossibly Hard” and they’re fun to try, though they’re aptly named. Despite the honest name, frustration can’t help but set in after multiple attempts — I’ve attempted the first one nearly 150 times and have yet to reach the checkpoint in the middle of the stage.

The other set of bonus stages are “Retro Stages” and they’re unlocked by finding hidden VHS tapes throughout the levels — these retro levels revert the world of Runner3 to a flat side-scroller rather than a 3D on-rails platformer. The retro levels have an exclusive collectible as well: gold coins known as Gildans.

A Cacophony of Collectibles

Runner3 has other collectibles besides the VHS tapes for players to find. Most obvious are the standard gold bricks that are scattered throughout each level. There are 100 per level, and finding all of them in a level will net you a chance at some bonus points by shoving CommanderVideo into a cannon to be shot at a target.

Beating a stage once will also unlock a “Gem Run” for that level, utilizing different, harder paths through the stage in order to collect 25 pink gems in addition to gold bricks.Each stage also has a puppet hidden somewhere in either the standard run or the Gem Run, often found by taking an optional path that will cause you to miss either gems or gold bricks. The plus side is that you keep the puppet if you happen to die after nabbing it, so you can grab it, die, and go back through to still achieve a perfect score. Collecting all of the puppets in a world will unlock a special puppet show to view near the end of the world, though I’d be lying if I said it wasn’t bizarre. 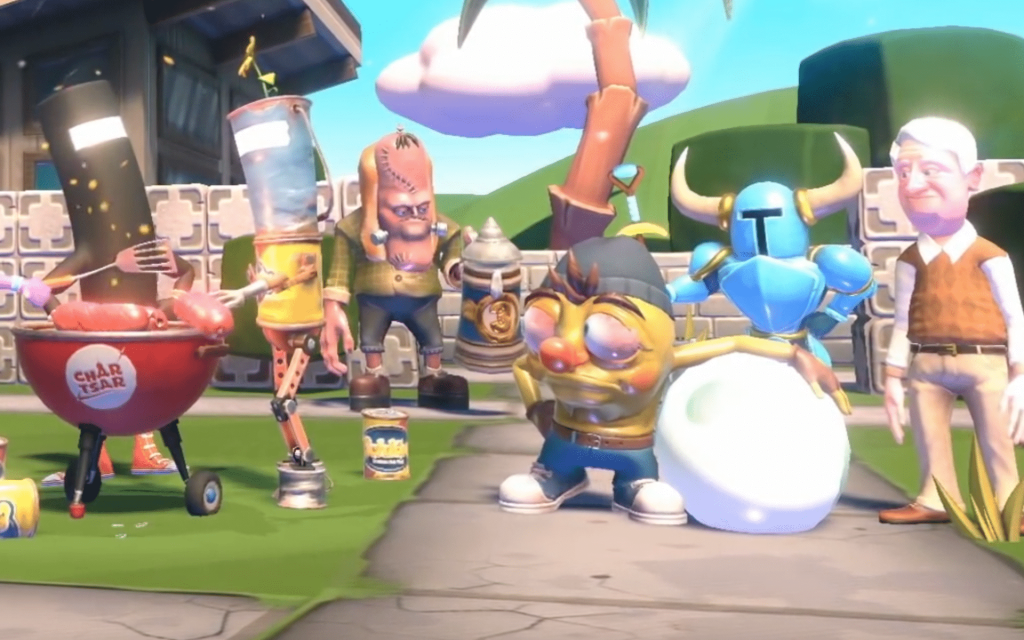 Outside of in-stage collectibles, there are unlockable characters in Runner3, unlocked by completing Hero Quests, which are quests given to you by NPCs to collect certain items. These heroes can take the place of CommanderVideo in the game, letting you run amok as characters like Unkle Dill, Sadbot, and… Charles Martinet?! The guest characters, Shovel Knight and Brutal Legend’s Eddie Riggs, along with Mr. Martinet, are pretty great (if not a little out of left field) choices for Runner3. Each world also has a shop where you can spend gems and Gildans to buy clothing, accessories, and special trails, called Capes, for your characters.

Every world is also home to a boss fight, which will switch up the controls a bit, but it doesn’t take much to get the hang of them. The first world’s boss, Sausage Santa, is a favorite of mine. To defeat him, you must catch the sausages he launches at you in a special meat grinder-like vehicle and launch them back at him while he’s also shooting missiles at you — to either damage you or destroy the track you are driving on. It’s straight up weird, but definitely entertaining. 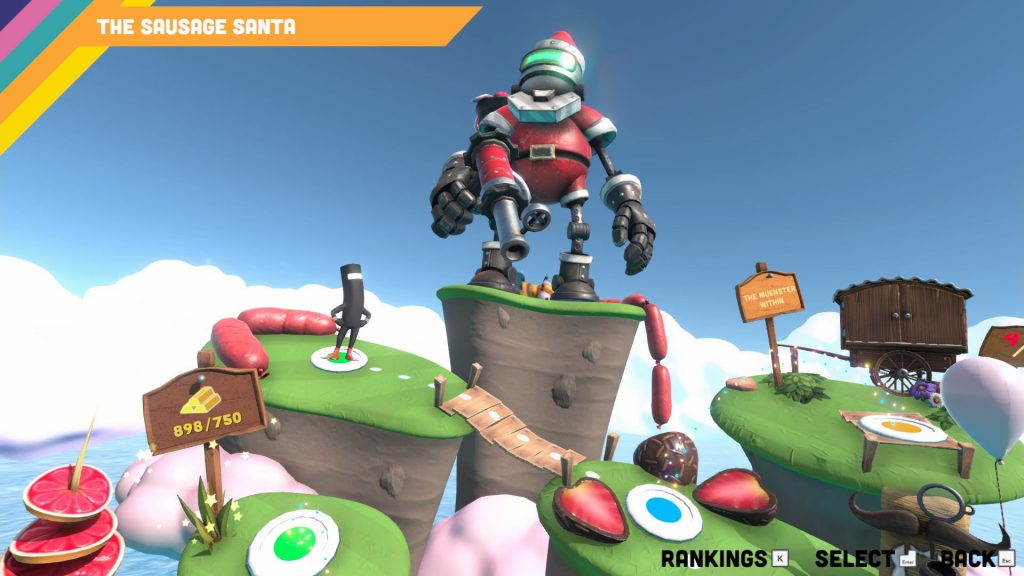 The music in Runner3 is catchy above all else, though it definitely gets grating as you have to retry levels again and again. It helps that as you progress, you can hit boomboxes that will increase the depth of the music, adding new melodies or beats as you go, but a person can only hear so much of the same whimsical song before it starts adding to the frustration. Despite this, I’ve found myself humming a bunch of the songs to myself after playing several days this week, and I didn’t mind one bit. The way that the melody lines up with certain bits of levels definitely feels immersive; hearing the music come together with a particularly difficult bit of platforming was especially satisfying. Getting into the beat can be your downfall though, as the patterns can end with no warning, resulting in a death that can potentially lose you lots of progress.

Overall, I enjoyed Runner3 quite a bit. Is it perfect? No, but it’s rhythm platforming done pretty darn well. The music isn’t the main focus, so it doesn’t feel like a crutch that masks the gameplay — and when it all comes together, advancing in levels is truly satisfying. The difficulty can be extremely frustrating at times, though mastering the game is going to be something that the right people are going to sincerely enjoy doing. Whether or not I happen to be one of those people depends on the mood that I’m in, and that’s okay — because no matter what mode I was in this week, I looked forward to busting some moves in Runner3. 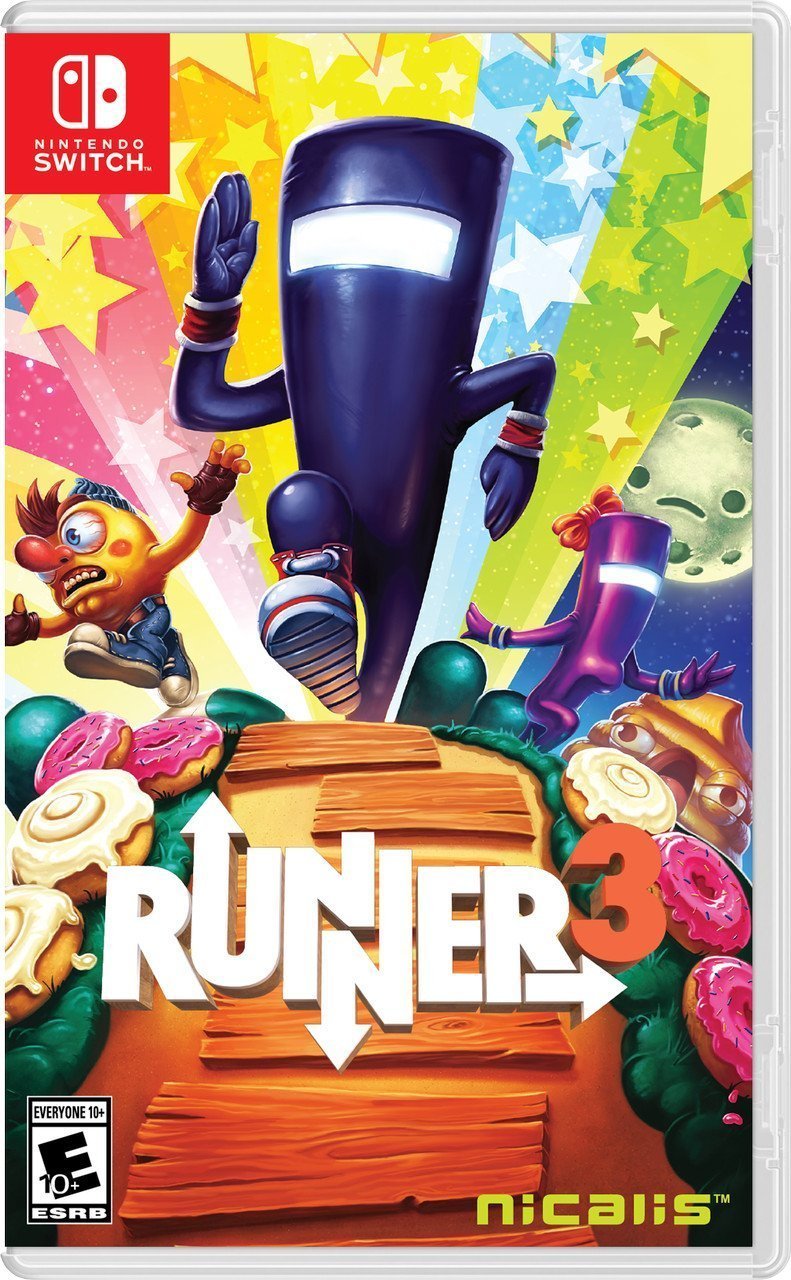