BlazBlue Cross Tag Battle, which just finished up its online beta, will be releasing early June. While we know the game will have 20 characters in the base game and 20 DLC characters, we did not know what the full roster would be.

According to Twitter user @OtherEhm, though, we may finally know the identity of the nine remaining DLC characters. 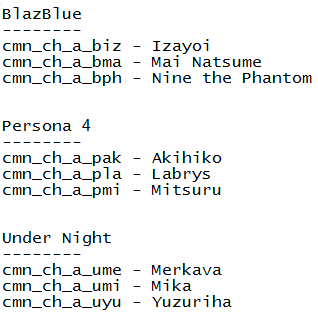 From BlazBlue, the leak finds Izayoi, Mai Natsume, and Nine the Phantom. From Persona 4 Arena, we have Akihiko, Labrys, and Mitsuru. Finally, from Under Night In-Birth, we get Merkava, Mika, and Yuzuriha.

I was incredibly impressed by the game while playing the beta, and I cannot wait to get my hands on the full release. What do you think of the roster? Let us know!