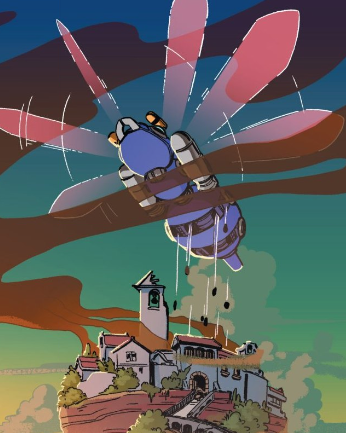 That’s on the first panel of this week’s final Sonic the Hedgehog comic for IDW’s April launch extravaganza, and it’s a fitting metaphor for the scale of this issue. The mysterious threat that’s been built up for weeks is finally going all-out with bigger bots and it presents a more daunting challenge for the blue blur.

This larger scale is also represented by this week’s cast of core characters. While the last three issues focused on Sonic teaming up with a single partner for a brief skirmish, we get two additions to the party this time around – Blaze the Cat and Tangle the Lemur. If the latter sounds unfamiliar that’s because she’s a brand new named character created just for the comics, and, like Rough & Tumble from last week, she’s pretty fun! Even if we don’t get to see much of her personality, thanks to the robot assault ‘n all. 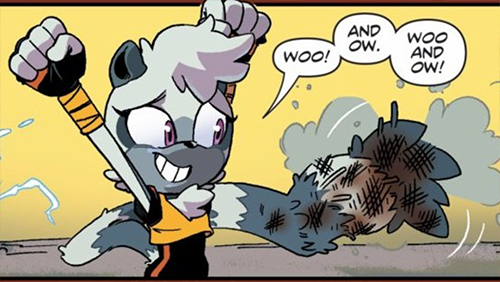 Despite this lack of exploration Tangle does have a lot of potential. As these new comics are directly following decades’ worth of Sonic game story-lines, the usual band of buddies is pretty experienced at this point. Tangle, though? She spends most of this issue being starstruck by the abilities of her compatriots, giving the audience a more grounded rookie character to latch onto. That said, it’s not as if she’s useless, thanks to her possessing a unique skill of her own – an incredibly long, stretchy tail that seems to defy the laws of physics and biology, but boy does it look like it’d make for a fun game mechanic.

The re-introduction of Blaze is also a nice surprise for those of you who played Forces and were baffled by her exclusion, which is finally explained here. She’s definitely one of the weirder characters in the Sonic lore, being a flame-wielding cat princess from another dimension, but they work her in nicely and with the right amount of self-awareness. It makes me wonder if they’ll go out of their way to explain why on earth the time-travelling Silver was casually hanging out with everyone during Forces, though.

Issue #04 is filled with quips but it also has a darker tone, thanks to the aforementioned heightened threat. This is represented perfectly by the art, drawn by Evan Stanley with colors from Matt Herms, which might be the best in the series yet. The characters pop on the page but not too much, while some of the faces the characters make made me crack a smile or twenty. I present to you this cocky gremlin Sonic who I love with all my heart: 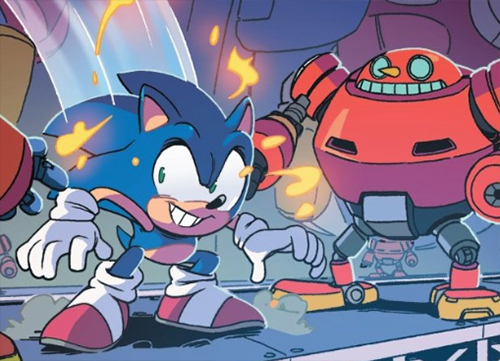 With May on the horizon we’ll soon be setting into a monthly release schedule of Sonic comics, which will be quite the change for my schedule! I’ll still be covering the issues as they come in, but until then be sure to check out the series so far. While it does feel a little too soon to say if the story will continue to hold up, this initial batch has perfectly encapsulated the feeling of the games while giving its own charming spin. If they keep up the quality of this week’s issue, we should be golden.