With the third issue of the month releasing, we’re more than half way into the bombastic beginnings of IDW’s fresh run of Sonic the Hedgehog comics. In the previous installment Sonic helped clear out a village of robots with the help of Amy Rose, setting up a pretty solid relationship. This week? Well, its co-star needs no introduction… 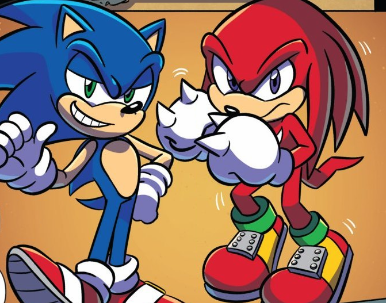 Knuckles is one of those characters I’ve always had an affinity for – his design is cool without being “edgy” and in later games he was usually the most comedic element, which carries over to these new comics. If you’re worried that means he’s a clueless idiot like his Sonic Boom incarnation, however, don’t be. The jokes are aimed more at the character’s cocky and self-assured attitude rather than outright stupidity, which isn’t unlike what we saw in the Sonic Adventure games.

Speaking of call-backs, this issue has the most blatant ones so far. While the first part had flashbacks to the likes of Adventure and Heroes, dialogue this time around makes it incredibly clear that the new continuity flows from the games. Like any good expanded universe material it even delves into explaining certain oddities from the main canon – in this case, the presence of Wisps in Sonic Forces. The explanation is still pretty bizarre, but it’s better than nothing. 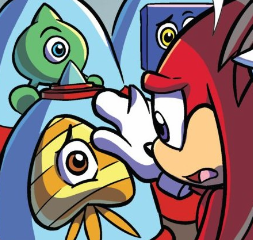 Fans will also be glad to hear Knuckles’ connection to Angel Island is back, though at the same time it brings back an issue the game’s eventually decided to ignore for the sake of convenience: Knuckles leaving the Master Emerald unprotected. That said, it seems like this glaring problem will be addressed later on, so it might turn out to be a good decision yet.

The issue isn’t just all old stuff, though, as we get our first major new characters: Rough & Tumble. This pair of mercenaries seem like series’ take on Team Rocket-style comic relief antagonists, and their designs are surprisingly fitting, avoiding typical “Sonic OC” pratfalls.

We also have another art change, with the comic this time being drawn up by Jennifer Hernadez and colored by Heather Breckel. While issue #02 still has my favorite style so far, this shift to a more colorful and poppy atmosphere makes sense with the subdued tone making way for the wacky antics of Sonic, Knuckles and their goofy new foes.

While issue #03 is definitely fun, it does essentially have the same set-up as the first two, with Sonic liberating a village from an oppressive force with the help of a buddy. There are a few twists on the formula, but I have to hope the next issue will be the one that breaks the mold. Given that it’ll introduce the most marketed new character, Tangle, I’m fairly confident it will. Join us next week for April’s finale!