Last week saw the beginning of a new era for Sonic comics, with publisher IDW taking over and rebooting the series that was once synonymous with Archie. In my review of the first issue I praised it as a solid starting point – throwing in the right amount of fan-service but keeping things simple for the set-up. The second issue continues this trend, introducing another character and expanding on their motivations.

After issue #01 briefly explored the characters of Sonic and Tails, this follow-up focuses on one of the blue blur’s more controversial friends: Amy Rose. In the games she’s run the gamut from lovesick fangirl (Sonic CD) to independent force of nature (Sonic Adventure), with her more infamous portrayals basically casting her as Minnie Mouse with a hammer. Thankfully IDW’s Sonic comic is a mash up of the first two characterizations, with its own twists. 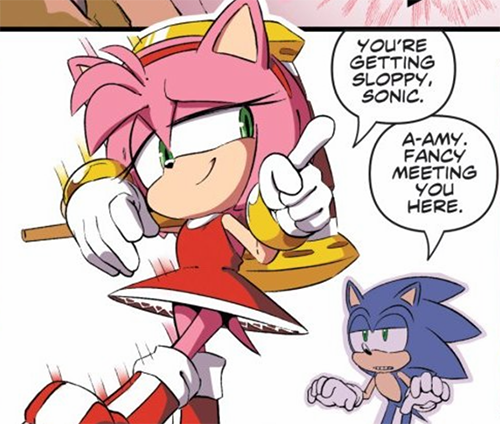 Amy still has the blatant crush on Sonic, but it’s not her defining character trait, and in a way it’s deconstructed throughout the issue as she learns to put her feelings aside so the two can accomplish their own goals independently and respect each other for it. This feels like a much more healthy way of approaching the relationship than we’ve seen before, and chances are it’ll be the core “romance” of the saga unless a Sally Acorn-style character gets introduced at some point.

One thing you might find off-putting about the story, however, are the constant references to “the Resistance” and the general militaristic tone. This is only natural given how the previous issue made it pretty clear the comics act as a sequel to Sonic Forces, but I can still see it being a shock if you were expecting funny quips and not lines of dialogue that sound straight out of a particularly tense scene in The Last Jedi.

One of the most striking things about this issue is the art, this time whipped up by Adam Bryce Thomas. While the last issue was filled with approachable and colorful artwork, this follow-up gets a bit more stylized and subdued, which fits the slightly darker tone of a town under siege. Expressions are still fantastically animated, however, with both of the core characters having some brilliant wordless reactions to the shenanigans surrounding them. Same goes for the battle scenes, which once again encapsulate the frenetic feel of the modern games.

Character design is also improved this issue. While the villagers are still clearly modeled off Sonic Forces’ character creator, they feel much more unique, with different species being represented with better fitting outfits. Time will tell if humans will eventually be introduced to this world, bringing all of their bizarre baggage with them, but for now I love the unified design of the setting. 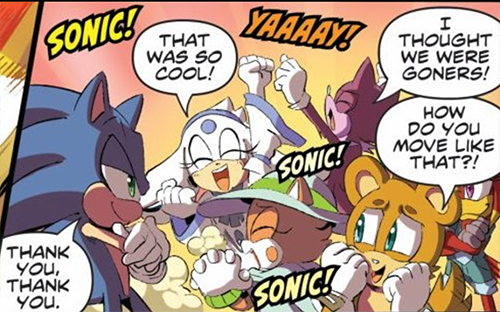 Overall this issue has solidified my confidence in the writers’ and artists’ ability to work with the world of Sonic the Hedgehog, managing to balance the series’ inate surrealism with understandable and relate-able characters.

What’s up next for IDW’s Sonic is perhaps the most exciting issue yet, though, with the fightin’ freak Knuckles himself finally making his debut. Be sure to check back next week for our latest coverage!