Yoot Saito reveals he worked on the unusual, cancelled Mario Motors for DS

There’re plenty of ‘lost’ games out there, but thanks to a recent game design talk at Reboot Develop 2018 (a game developers conference just wrapping up in Croatia) with Yoot Saito we can add another to the list. As reported by Destructoid, “Mario Motors” was an idea from Mr. Saito, director of SimTower, Seaman, and others; that came from chatting with Satoru Iwata and Shigeru Miyamoto over tea one day.

Thanks to an interest in sculpting chunks of metal, like what must be done to make watch parts or the inner workings of a computer, Saito presented the concept in a loose and conversational way to the two Nintendo executives. They were intrigued enough to give it a shot, and Mario Motors grew from that into a game about sculpting engines. 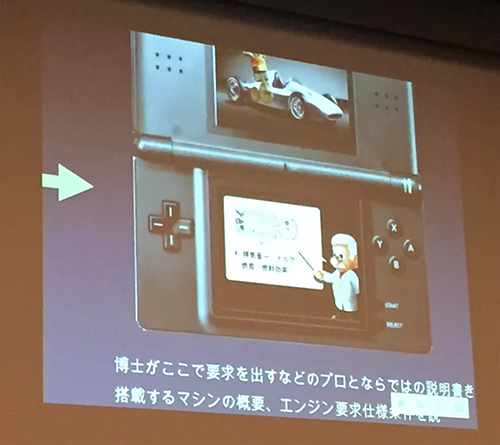 The idea would’ve taken shape on the DS and involved creating cylinders to then be placed into motors. The idea was to teach people about acceleration and the inner workings of these machines, though no firmer details were provided. It was stated that the DS microphone would’ve been involved, though Saito was concerned with children running out of breath due to this. Beyond that, the project was canceled for undisclosed reasons.

It always interests me seeing how game concepts spring up from these creators, and the thought of these three sharing their ideas and time with each other puts a smile on my face. Mario Motors may never come to be, but it’s at least another great example of this camaraderie and drive to make fun and interesting games that defines Nintendo at its best.