Review! The Legend of Zelda: Breath of the Wild!

What’s up, my dudes and dudettes, it’s ya boi swordlegend96, here with my Breath of the Wild — or, as the cool kids say, BotW (pronounced “Bott-wuh”) review! I can’t believe I finally have the chance to share my thoughts on this game — Nintendo Wire passed me a review copy (shoutouts 2 Jason + Lauren!), and I promptly got to work playin’. Unfortunately, the game was so large that it took me over a year to finish. I came close in December, but then the DLC dropped. Guess that’s value for ya!

Now, I’ve been a mega Zelda fan since I was a little boy. I remember picking up my first game in the series — Super Smash Bros. for the N64 — and wondering who that elf Peter Pan guy with the sword was. Years later I managed to track down an elusive copy of the most underrated gem in the series, A Link to the Past, and from there I was in love! Going into it I was sceptical that the game would surpass my favorite in the franchise (Zelda II — fantastic game!), so I went in with tempered expectations. I mean, any game that gets near perfect 10s across the board is probably just overrated, am I right?

What a start, man!

Immediately upon the game starting I noticed problems. Like… it just began? With small, silent text? On a black screen? Talk about underwhelming! If it were up to me I woulda put some bombast into it — maybe a grand orchestra, with cannons and everything. Go Tchaikovsky on it, ya dig? Anyway… the voice acting was kinda weird at first too, but I think a British accent worked well for Zelda, considering she’s like, the Wisdom person and all. 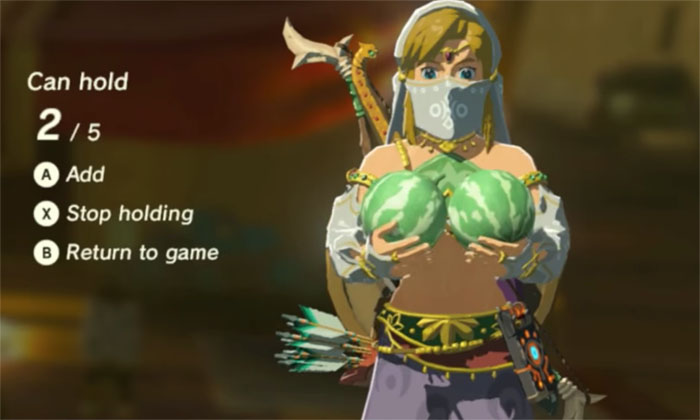 There was another big issue right afterward. Link… was shirtless. Shirtless! And he had, like, muscles! And a ponytail! I was so shocked, I gawked at it for like five minutes. Even after getting equipment that covered him up, I sometimes undressed him just to make sure I wasn’t imagining it. But no, he was definitely half-naked. I can’t believe Nintendo would put this kind of content in a kid-friendly game! It was even bett- er, worse when I had to crossdress later on. This definitely ain’t the Nintendo I grew up with, that’s for sure. This level of attractiveness was so distracting that it pulled from the entire experience.

But even as I tried to pull myself away from his figure, the game was oppressing me in other ways. When you first step outside of the opening cave, the world before you is like… BIG. Like, we’re talkin’ open-world big. And there wasn’t no railroading or anything — I could just pick a direction and walk in it! It was terrifying. I’d never been so paralyzed by indecision. Things actually went ok for the first couple hours, but once I was off the starting plateau? I was just sitting there, hunched over, unable to choose what I did — kinda like when I didn’t know the answer on the Christmas Carol quiz in Ms. Schulz’s class. Some bad trauma, man! Couldn’t they have made the game a little smaller? C’mon, Miyamoto! 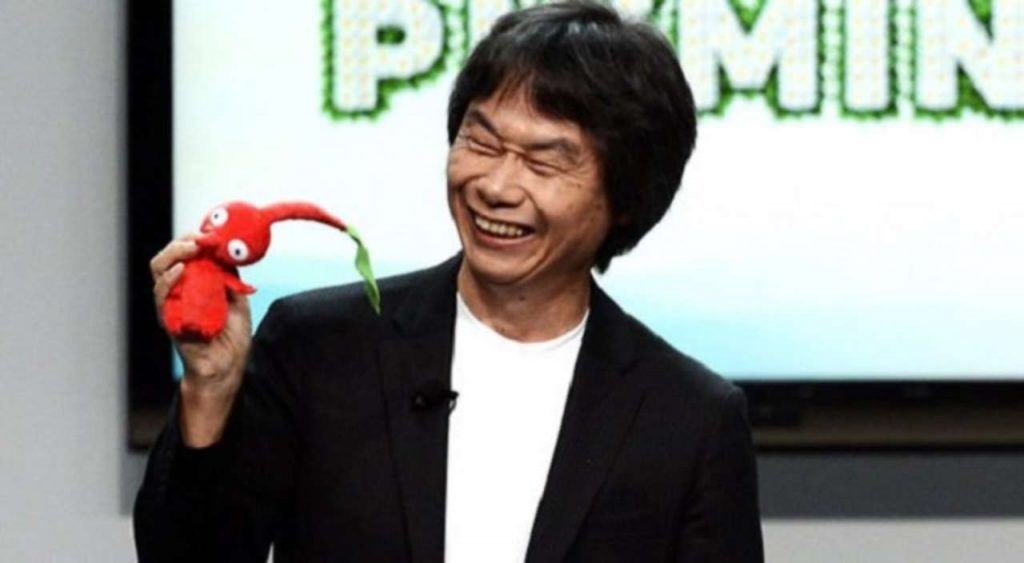 Once I got over my initial shock, tho, I gotta say that things started to feel more familiar. Breath of the Wind is basically Skyrim without the magic but also robot octopuses that murder you in cold blood. You go around, kill some goblins, steal their stuff, contemplate the stunning beauty of a landscape that has eroded abandoned structures in a testament to the impermanence of human works before the face of nature’s might, and maybe find some treasure chests. Sometimes the chests have sick boomerangs, sometimes they don’t. I wish they always did.

Now, this game wasn’t like most of ‘em open-world games you find. When I first climbed one of those Sheikah towers in order to fill in my map, I expected the game to tell me where all the cool stuff I could find was, but instead it showed me zilch! It makes you, like, go find it yourself! What’s up with that? Now I had to like, use observational skills and resources to scour the environment instead of being led around by the nose. Why didn’t the game just gimme a laundry list of tasks? C’mon Miyamoto! 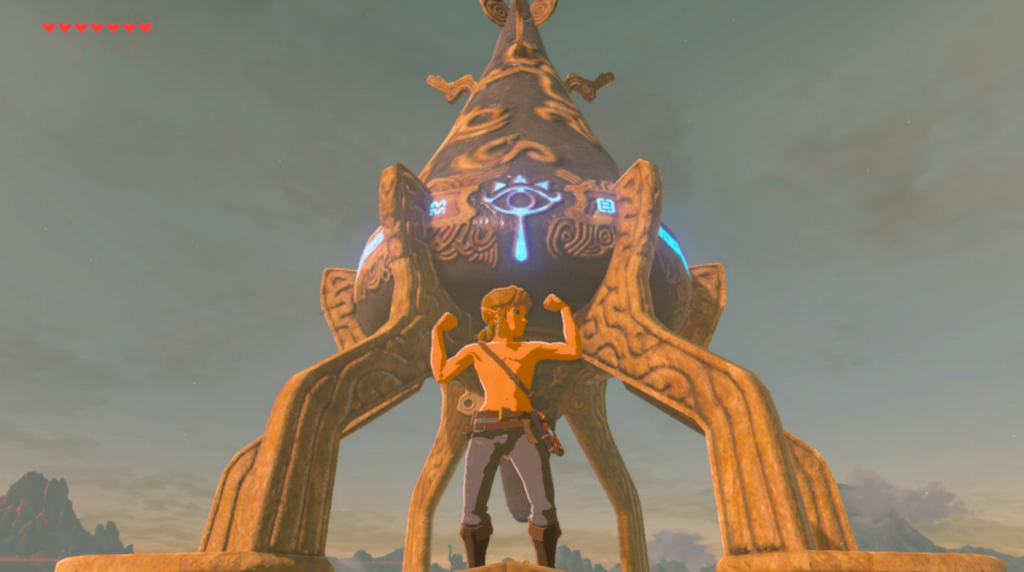 That said, this game’s definitely the Dark Souls of Zelda. I died like every ten minutes or so, and while I pretty much lost no progress ‘cuz of the way it autosaves, I still felt like this game was BRUTALLY CHALLENGING. One time I ran into some kinda lion centaur that just wiped the floor with me! He was probably impossible to beat. I never even tried it. And don’t even get me started on the laser squids! I can’t believe Zelda has become so difficult. Not like ol’ Zelda II, that’s for sure.

Overall the aesthetic of BOWT is just plain underwhelming. I mean, sure everything looks like it’s a picturesque painting straight out of a Ghibli film, but where’s the photorealism? Ninty will never compete with Destiny at this rate! And the soundtrack? What soundtrack? Everything was all ambient, atmospheric noises that quietly strengthened the game’s somber mood! If I wanted that, I’d go outside IRL. (My mom tells me to sometimes, but what does she know?)

Something that is kinda cool about ol’ Breathy Wild is that it has a lot of different weapons. Yeah, there’s the Master Sword, of course, but there’s also swords on fire, swords that freeze peeps, swords that shock ya, and the previously mentioned sick boomerangs. Only problem is that you can only swing ‘em like three times before they shatter into a million pieces! And then you, like… have to find other weapons? What? I should be able to run straight to the best weapon in the game and use it the whole time! I don’t care if the breakable weapons require me to be considerate and strategic with my item usage! C’mon Miyazaki!

This game also has, like, way too many puzzles. They’re all located in shrines you have to hunt down across the landscape, see? But there’s over a hundred of them! Who has time for that? And whaddya get for completing them all? Just Link’s old clothes! They gotta be really smelly by now… wait, where does this game fall on the timeline again? We should figure it out. That’s definitely the most important part of the Zelda ‘verse.

Now, despite all my issues, I gotta say I walked away from Botswana with an overall positive vibe. At first I thought the story was going to be grand and multifaceted, but I was relieved to discover it was actually underdeveloped, since it saved me some emotional investment! Phew! And finding out that the dungeons were just really big shrines helped out, since I didn’t have to go through the normal Zelda dungeon process of like, discovery and set patterns and stuff. Oh, and of course, the Korok seeds kept me busy! Was super fun scouring every last inch (and I do mean that!) lookin’ for the little guys. The reward was well worth it, too! 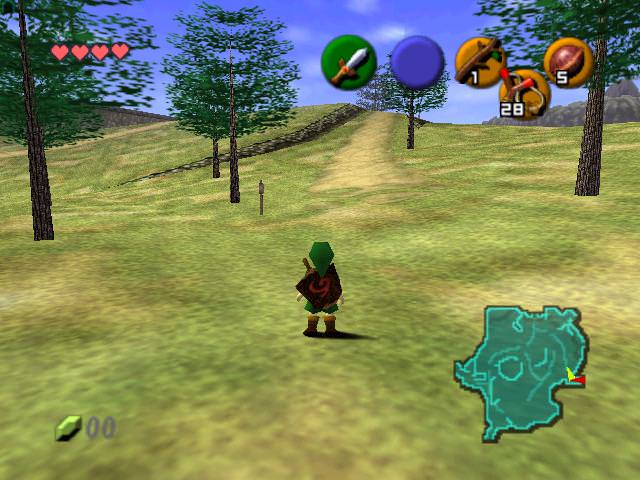 Overall, I’d definitely say that Brett of the World is a game worth your time. It definitely makes a great launch title for Switch that’ll tide you over until hits like Splatoon 2, ARMS, and Super Mario Odyssey come later this year. And it goes well with Snipperclips, 1-2 Switch, or a nice pinot noir. Whoever you are you should definitely pick this one up! Definitely worthy of the Swordlegendary Seal of Approval!

That’s a wrap on my end! Was a ton of fun writing out my thoughts, and I’m sure I did a great job expressing my thoughts on the game. Hope you guys enjoyed my first piece for good ol’ NinWire, and have a great day! Except you, l33tapprentice. I haven’t forgotten what you’ve done. 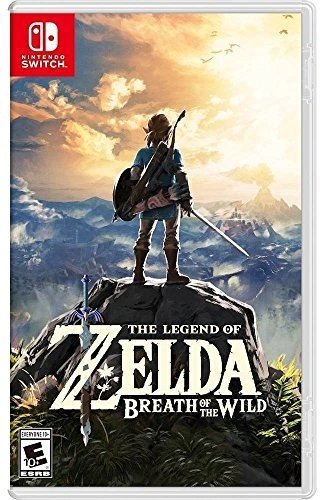 Slayer of the End-God, Level 150 Warsoul Conqueror, Lover of Dew and Doritos. When he’s not gaming in his sick battlestation, he’s practicing his wicked tonfa, watching giant robot anime, and writing for this website. Any rumors of him being Ben Fruzzetti are just that - rumors.