The day has finally come: I can finally add BlazBlue: Cross Tag Battle to my “day-one purchase” list, because Kanji from Persona 4 Arena, the single greatest character to ever appear in a fighting game, is finally confirmed as DLC for the game.

This is not to say that the other characters in the game aren’t interesting, but why would I want to play anyone else when Kanji can hit people with a chair, use invincible command throws, and attack with literal word bubbles? 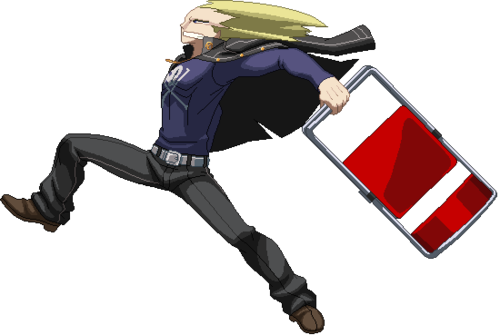 The other two characters, Orie and Platinum, are from other games. Orie is a rushdown sword character from Under Night In-Birth, while Platinum the Trinity is a girl with multiple souls trapped in her body that plays like a weird, bouncy Sailor Moon character with lots of bubble attacks.

Recently, there has been controversy surrounding the game’s decision to release the game with 20 characters in the base game and 20 as DLC. During a recent stream, however, the developers heavily implied that the pricing structure would be about $40 for the base game and $20 for all of the DLC, bringing the total to $60. There is still a debate about the ethics of the decision, but it is good to hear the base game won’t be full price.

But let’s talk about Kanji more. I love my strong, wild chair boy. The game has recently been confirmed for the EVO 2018 tournament, so I hope to see that big, beautiful man throwing people around in Grand Finals.