In an age when games are announced and released in a few months’ time, made by hundreds of developers, and funded by a publisher looking at what’s most marketable rather than what will make the best game, we can always rely on the smaller indie gems to remind us of why we play games in the first place: to dive into finely crafted worlds packed with the dev team’s love, care, and consideration.

Owlboy is such a game. With a nine year-long development cycle that began all the way back in 2007, it was finally released on PC in 2016, where it won critical acclaim and captured the hearts of many — including myself. Now the heartfelt tale makes its way to Switch, and retains the charm, finesse, and soul that makes it an indie title you simply can’t miss.

Owlboy is the story of Otus, a young Owl living in the floating village of Vellie. A mute, Otus struggles to make friends, and is constantly disappointing his mentor Asio with his ineptitude. But when a mysterious ruffian shows up in the village one day, Otus and his single buddy Geddy go to investigate — starting a chain of events that lead to cataclysmic results. 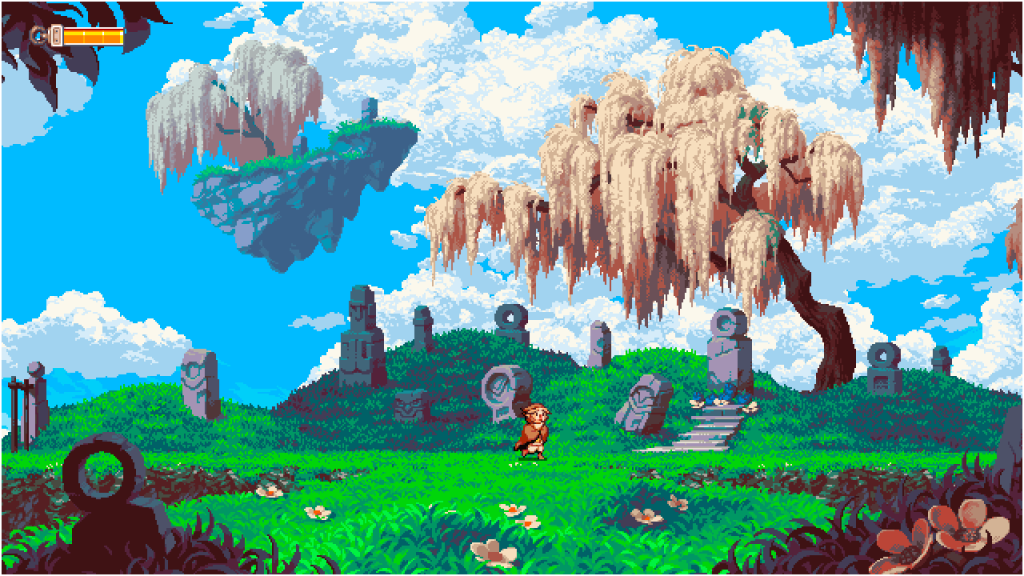 Despite not being a particularly long game, Owlboy’s narrative is rich. It has thorough and unique world-building, including nuggets you have to go and find yourself. The plot, while not terribly original, manages to have some hard-hitting developments and legitimately shocking twists. And the characters are all lovable in their own right, running the range from charmingly simple to intriguingly complex.

What sets Owlboy’s narrative apart from most is the deftness with which it delivers its emotion. Through sections of gameplay that alter your control or the environment in careful ways, the player is essentially forced to interact with the environment in a more thoughtful or dramatic manner – and the payoff is immense. While not the most intricate story in other game, Owlboy is a game that can get you in the heart just as much as it gets you in the gut.

Most games use a pixel art style as a crutch, or as a means to an end. Owlboy makes all of these efforts look like first grade scribbles in comparison. The sheer amount of detail in every sprite, environment, and animation is absolutely stunning to behold, and pushes forward the idea that pixel art can be more than mere nostalgia pandering, but a work of beauty in its own right. 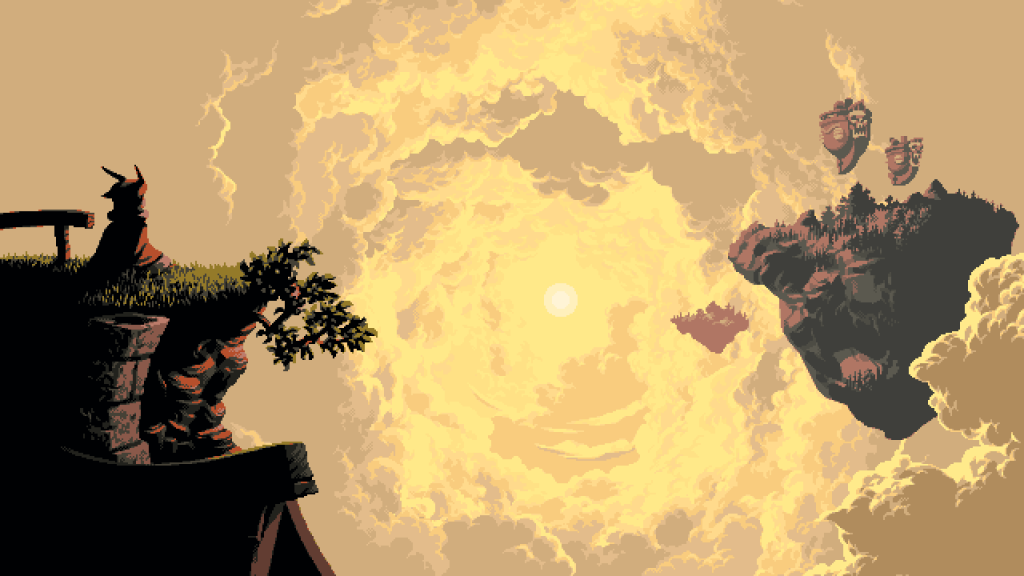 The game is no one-trick pony when it comes to its environmental design, either. While you’ll start off with a somewhat typical grassy aesthetic, you’ll soon encounter musty caves, dense jungles, ancient ruins, and even a magma filled cavern. The rich variety coupled with the exquisite amount of detail makes for a breathtaking and memorable game.

The atmosphere is belied by the game’s soundtrack, which is also great. Light and adventurous in tone, yet also able to become more stark or dramatic when needed, it suits each area perfectly. The atmosphere is rich and exuberant, making each area traversed through an absolute joy to experience.

To the clouds above

Owlboy’s gameplay could best be described as a Metroidvania-lite where you can fly. Otus has a variety of zones and areas to explore, fighting baddies, discovering secrets, and collecting treasures along the way. While there aren’t nearly as many items used for progression as your typical Metroidvania, there is still an expansion of exploration options as the game progresses. 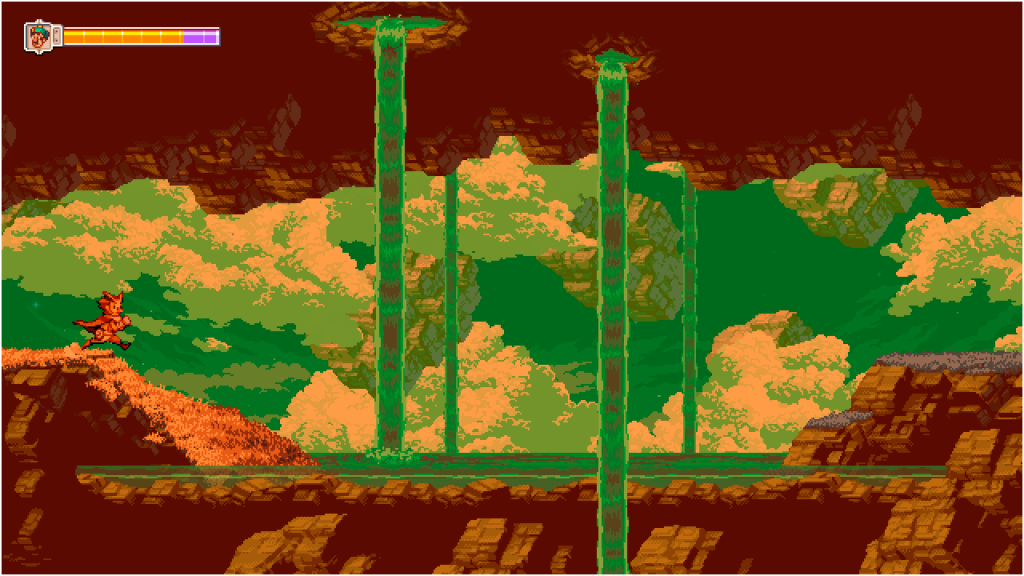 You’ll start the game off with Geddy, who pellets foes and obstacles with light gunfire, but you’ll acquire other partners later on. Each has their own weapon balanced around fighting and problem solving, so they each have their own situational uses and are all fun to use. I feared that aiming with the right stick on a controller might feel cumbersome, but a lock-on system means the game controls quite well (though flying controls may take a bit of adjustment, as pressing A in midair has you land rather than take flight).

One of the only flaws Owlboy has is in its primary collectible, Buccanery Coins. Scattered throughout the world in finite amounts, you need to trade them in to the titular Buccanery to obtain outfits and some upgrades. For the most part this isn’t an issue, and you should be able to unlock the majority of these without too much hassle. But if you’re a completionist, prepare to scrounge long and hard, as the game doesn’t do too much to indicate where they are other than giving you the totals for each area. And the way the level design is structured, alongside the lack of a map, can make the exploration a bit dizzying sometimes (particularly in the Owl Temple). 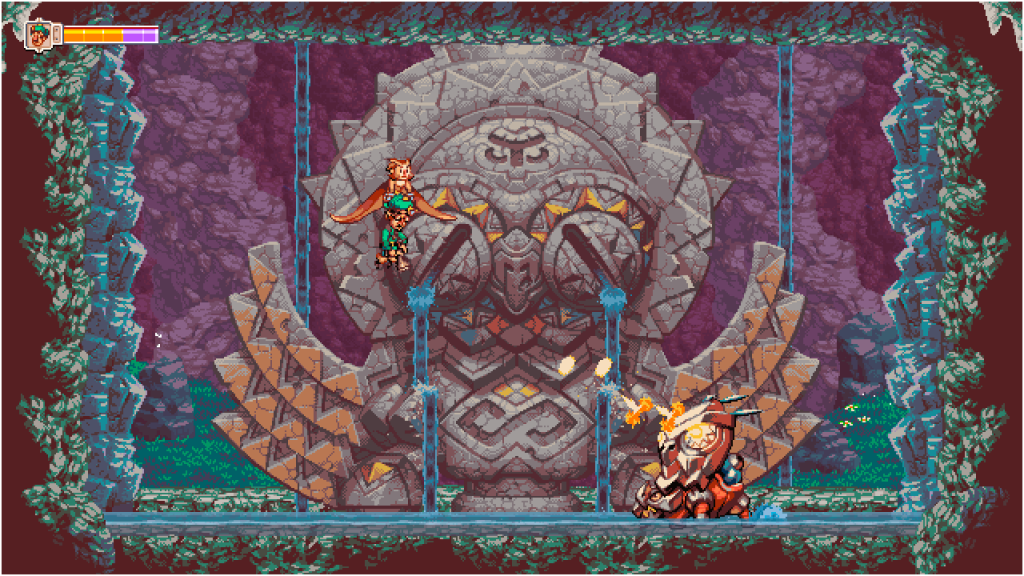 Fortunately, the game does boast some really good boss fights, each of which feels unique and interesting in its own way. Some are bullet sponges that require lots of pelting, others will hurl tons of flunkies your way, and more will demand patience and timing in striking at the exact right moment. The final boss in particular combines skills required for the entire game along with stirring ludonarrative to craft an emotionally wringing climax.

To the earth below

Besides the above, the review build of the game did have a number of technical hiccups. Most were harmless graphical mishaps, but there were a couple hard crashes and odd happenings here and there. These are things that can be patched, however, and the fact that I was told about many of them ahead of time assures me that they won’t be a great issue to many players. It’s worth mentioning nonetheless, of course.

Owlboy manages to stand above many other indie titles — and even more AAA ones — thanks to the heartful narrative and gorgeous aesthetic, backed up by great gameplay. D-Pad Studio took its time in crafting a beautiful experience full of love, and it is absolutely worth your time to pick it up, unless you have some sort of aversion to avian-based games.

The game is admittedly not that long, especially for its price point, but every moment leading up to the end is good. Never does it lull or drag on, and always does it manage to present something interesting or impassioned. If you own a Switch, I implore you to at least give the game a look, because everything — and everybody — deserves a chance to prove themselves. 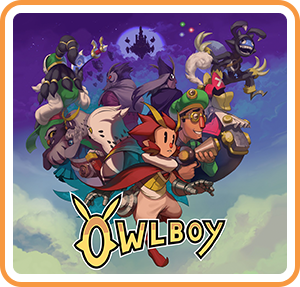