Guns and video games — a marriage seemingly as old as Father Time himself, feared by moms and demonized by politicians the world over. Love ‘em or hate ‘em, these controversial pickups remain one of the most diverse and useful tools in the game designer’s box, providing countless creative gameplay opportunities — from puzzle powered Portal Guns and golden, one-hit killing wonders to Reploid mounted Mega Busters and, more recently, pistols that can shoot the past. Right in its stubborn, forward marching kisser.

That last one barely scrapes the bullet-brazened barrel of imaginative weaponry dreamt up by Dodge Roll Games’ captivating indie shooter, Enter the Gungeon: a masterful fusion of roguelikes and bullet hells and my latest obsession in twin-stick, arcade action. So strap on your ammo belts and pump up those shotguns as I unload my thoughts as to why Enter the Gungeon proves one of the finest dungeon diving shootouts fans of trigger-happy heroics won’t want to miss. 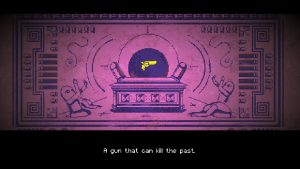 GOTTA GET BACK, BACK TO THE PAST

Enter the Gungeon follows the dungeon diving exploits of four gunslung misfits in search of absolution. Burdened by past mistakes and blessed with itchy trigger fingers, these delinquent desperados shoot, loot and table-flip their way through shifting labyrinths and sentient shell casings in search of a godly gun that can kill the past. It’s all delightfully campy, wrapped up in an endearing pixelated aesthetic and synth soaked soundtrack very fitting of its tongue-in-cheek attitude.

Upon firing up the title screen, you’re blessed with an addictively catchy theme complete with harmonized vocals that’s bound to lodge itself in your skull. While the rest of Gungeon’s tracks aren’t nearly as memorable — oftentimes bleeding together in a chaotic cacophony indistinguishable from the last — they still manage to get the adrenaline pumping by complementing the action blazing across the screen well enough. Props, however, go to the seductive sound design on display: a symphony of satisfying pews, pings and pops with each pull of the trigger that still ring true long after your Switch screen fades to black.

Strapped beneath its quirky narrative and pixel perfect looks is a stylish, twin-stitched under armor often adorn by the best of the roguelike bunch. In fact, Gungeon proudly wears its arcade influences on its bicep torn sleeves, demanding accurate aim and carefully choreographed movements for dancing through its ballet of bullets unnicked. Thankfully, this penchant for precision is met with a fluid control scheme sticky enough to land your crosshairs on even the most mobile of scrap metal.

Should your shmup addled fingers fail to avoid the landslide of lead constantly barreling your way, all gungeoneers come packing a damage defying dodge roll. Providing a brief moment of invulnerability, mastering this maneuver is important for surviving the most hellish of hail storms blown your way. More than just a crutch, it’s a carefully considered mechanic woven into every fiber of the game’s design, particularly when passing through projectiles fired by the Gungeon’s many bullet barraged boss characters. 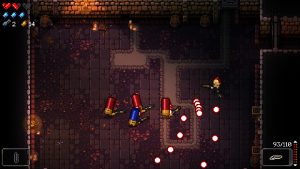 Not to be taken lightly, each and every boss fight requires you move with the grace and determination of John McClane stumbling barefoot through broken shards of glass. Gorgeously designed and hilariously punned, these memorable monstrosities prove powder kegs of death and destruction when compared to the Gungeon’s lesser pea-shooting pipsqueaks. Usurping the regal wrath of a pompous Bullet King, deflecting the stone cold gaze of an uzi wielding medusa and clipping the wings off a majestically muscular raven are a mere handful of the ammo belted behemoths you’ll tango with in your quest to kill time. Disarming each one requires players employ every trick in the Ammonomicon’s book — patience and pattern memorization notwithstanding.

That’s not to say the game’s many ‘munition crafted minions are to be entirely underestimated. These devious disciples of the gundead will stop at nothing to defend their temple’s hallowed halls, ranging from scythe swinging specters and bullet-shaped bats to wand wiggling wizards that can teleport behind cover and conjure deadly rings of fire in their wake. Palette-swapped baddies are no pushovers either, complete with radically different behaviors that comically complement their tweaked designs. Sure, they’re often easy enough to pick off on their own, but get a varied enough bunch of Bullet Kin bunkered in a room together and gungeoneers are left with quite the pickle to power through. 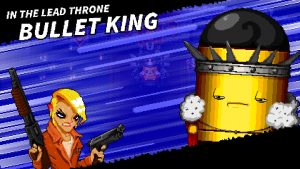 WE NEED GUNS, LOTS OF GUNS

Fortunately, making mincemeat out of cultists is child’s play thanks to a treasure trove of guns ‘n gadgets at your disposal. The sheer variety on tap is unparalleled — from traditional, yet trusted sidearms in the pistol, shotgun, and sniper rifle family to an absurd arsenal of semi automatic pulse cannons and explosive, boomeranging bananas. Want to emit a blinding blast of rainbow colored carnage while conjuring a six-pack punching genie? Wish granted. Belt out the alphabet in an onomatopoeic blast of deafening destruction?  Y the heck not? My personal favorite? A bundle of magic wands shoddily taped together with the ability to transform chumps into chickens. Best of all, there’s no cap to the number of guns one can carry during any given run, making each an experimental playground that encourages gleefully unloading each and every firearm down to its last clip.

This diversity in armaments does pose a minor jam to Gungeon’s gunplay: balance. With a cache of nearly 200 weapons to hold and holster, clearly not all are created equal, with far too few packing a powerful enough punch to get the end credits rolling. This also means the chances of having your favored firearm crop up again in future runs feels rare — a problem only exacerbated further with each new unlock diluting the drop pool. Personally, I wasn’t too bothered by it, finding luck-of-the-draw dictated how I played rather than how well, with each new wielded weapon posing new strategic opportunities to learn and implement. In this sense, it’s not a bad design choice, but ensures the difficulty of each run rely both on random chance and skill. It simply bears mentioning for newcomers to the roguelike scene turned off by challenging learning curves and typical genre conventions. 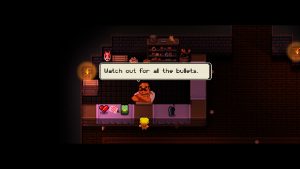 Make no mistake, fellow retro renegades: Gungeon’s focus on kickin’ down Death’s door with guns blazing in an act of misguided glory will get you killed. A lot. Though permanent, each bullet to the brain comes armed with countless lessons learned vital for pushing through future endeavors. Chests, shop items and boss drops are never the same, and dungeon layouts are in constant flux to ensure no two runs ever feel alike. In many ways it plays a lot like The Binding of Isaac, combining twitchy twin-stick action with the risks of Russian Roulette — especially true given players are only as mighty as their most powerful pickup.

Firing off the final round of this review, little quality of life enhancements help smoothline the gameplay experience to great effect. After clearing a screen of every last explosive enemy, any and all shell cased currency becomes magnetically drawn to you, alleviating the need to waste time pickpocketing the corpses of the fallen. Teleporters are scattered liberally throughout each floor, making easy work for backtracking to areas of interest or doors yet to be kicked down in a pistol-whipped frenzy. There’s even the option to quick-start a new run with the single press of a button upon death, barreling you straight back into a fresh run as the last character selected. Gungeon’s always offering ways to keep the action frantically paced, turning what often starts out a quick, 20 minute session into hours of bullet blasting fun. 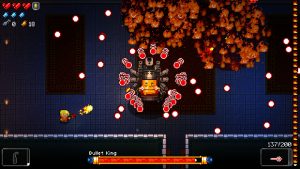 HAIL TO THE BULLET KING

Forged in arcade fires, smelted from shmups past, and filled with enough roguelike grit to blow a rift through space and time itself, Enter the Gungeon is a brain-splattered bulletstorm of gallant gungeoneering well worth loading in your Switch’s chamber. While an imbalance in gunplay proves a minor misfire, its charming pixel presentation and challenging twin-stick gameplay dodge roll with the best of ’em, proving a perfect sidearm for trigger-fingered fanatics itching to get their next fix in fun and frustration. 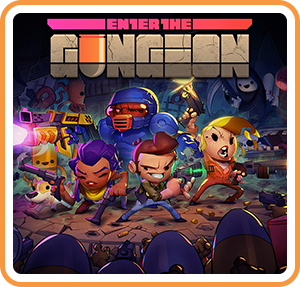