Xenoblade Chronicles 2 review-in-progress – Part 1: The beginning of the journey

Call me strange, but I love a good title screen. A lot of my favorites — Ocarina of Time, Final Fantasy VI, EarthBound — have intros that leave an impression, backed by a nice tune or jingle. When I played the first Xenoblade Chronicles over five years ago, I was brought to tears by the title screen track, swept up in its emotional grandeur. Upon starting up its sequel, I was hit with similar emotion, not just because the scene — dull gray rain articulated with a somber piano — was striking, but because I was playing a bona fide sequel to Xenoblade Chronicles, one of the finest games ever made.

My expectations going in were chaotic. I’ve been burned before on long-anticipated sequels, and going by some of what I had seen I feared that Xenoblade Chronicles 2 would be a pale imitator of what made the original so great. Just over 20 hours in, that fear has proven unfounded, and the experience has proven to be a great start — though I know the journey has really only just begun.

Xenoblade Chronicles 2 stars Rex, a young salvager of scrap and technology from below the Cloud Sea. After being hired for a mission by an enigmatic group known as Torna, he comes into contact with the Blade known as Pyra, who ends up saving his life. Feeling indebted, and realizing that the world will soon wither away, he agrees to take her to Elysium, a mythical land in the sky. And so the quest begins. 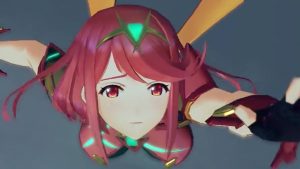 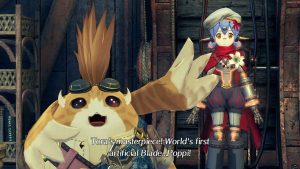 That’s a vast condensing of what happens, but the game’s plot starts off strong. Rex is an affable enough protagonist, eager and relatable without coming across as too hyperactive or annoying. Pyra has so far played the Mystery Card a bit, but she manages to have a nice, reserved personality. Motivations are strong and clear, and a number of hints foreshadowing future reveals are dropped, drawing you in. Time will tell whether these hints are resolved in a satisfactory manner, but so far I’m engaged in the plot.

The cast of characters is also pretty enticing thus far. Nia, a bestial former Torna member and friend of Rex, delivers some able snark and manages to have a good rapport with him. Tora, a mechanic Nopon dreaming to become a hero, is the comic relief — a bit hit or miss at times, but his character feels genuine and likable. The villains are also interesting, in no small part due to some hidden motivations — I’m very curious to see what the masked Jin and Inquisitor Mórag do as the story moves along.

While the comedy has been a tad uneven, and the tone a bit wackier and more anime, the core story of Xenoblade 2 has impressed thus far, and I’m sure the later parts of the game will only contain more intriguing elements. 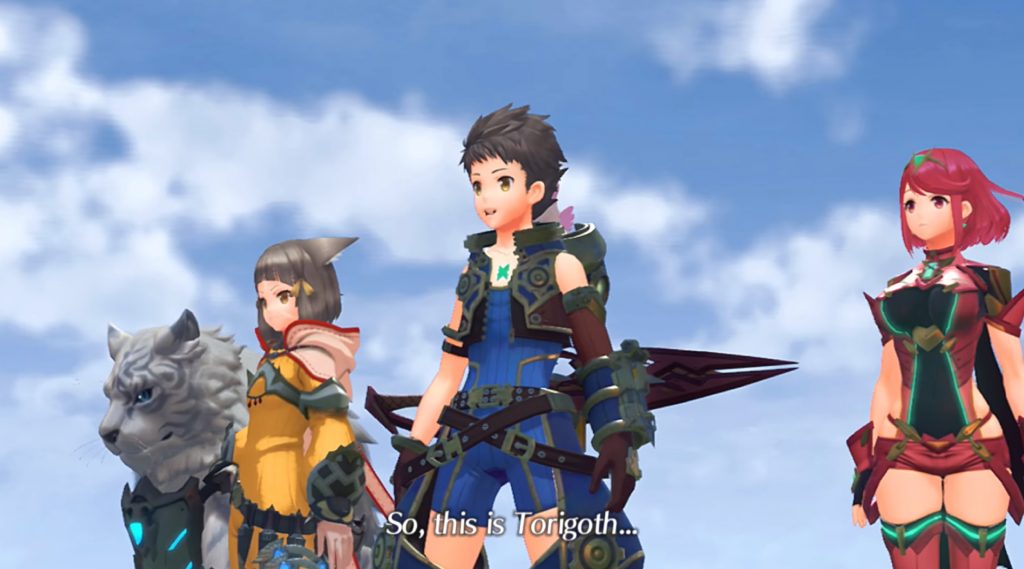 If there was one thing I was definitely apprehensive about going into this game, it was the character designs. I didn’t hate all of them, per se — in fact, there are a couple I like quite a bit, such as Dromarch’s regal tiger look and Mórag’s stately uniform. But there are a great many that are silly, if not outright stupid, in large part due to over-sexualization. Pyra is likely the first to raise some eyebrows on this front, but she’s far from the worst of it, as some of the Blade designs seem to defy good taste and physics. I wouldn’t say it’s the most egregious invocation of an anime art style ever, and there are a number that are good or even great; but there are plenty of outfits that make me shake my head and sigh.

But while I may shake my fist towards the character designers, I will happily prostrate myself before whoever designs the environments at Monolith Soft, because dear Zanza they are beautiful. I’ve only been to two real Titans thus far (technically three, counting the small starting area) but each one has had its great share of sweeping vistas, florid landscapes, and devious nooks. I’ve rarely had so much fun just running around an area and watching how things change from day to night — there’s a perfect mix of scale and detail, with large plains to stun your sensibilities and intricate crannies to reward your attention. Xenoblade environments are consistently wonderful, and I have no doubt that I’ll keep being stunned as the game goes along. 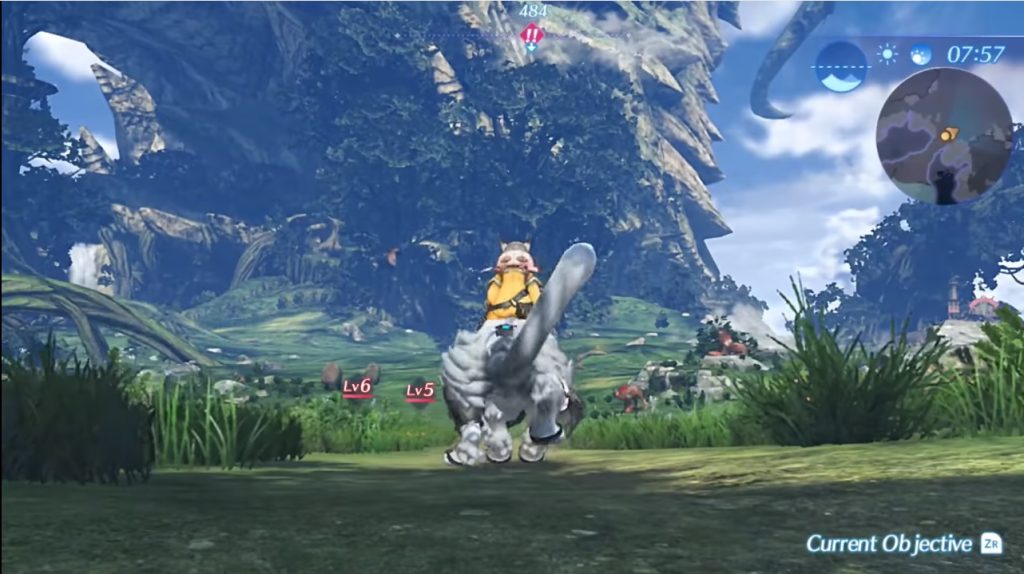 I would also be remiss if I didn’t mention the game’s stellar soundtrack. Yasunori Mitsuda and co. have outdone themselves yet again, offering tunes that are melancholy, majestic and hype-inducing. Certain pieces feel designed to call back to those from Xenoblade 1, and that’s a great thing, especially since there are also plenty that stand on their own. The atmosphere feels grand and sweeping, and that’s the sort of feeling that is surprisingly rare in an age of open world games.

Xenoblade Chronicles 2 has reworked the battle system from the previous two games, coming up with something that feels both very similar and very different. Fights still take place in real time, with your characters auto-attacking and you using Arts with various effects (healing, doing more damage in certain positions, and so on). While your PCs (known as Drivers) are limited to three Arts at a time, they can switch between Blades to change their Art lineup, allowing them to adapt to situations. Arts also feed into Specials, which feed into Blade Combos, which feed into Chain Attacks — meaning every action taken is ultimately in the service of racking up more damage.

2’s battle system feels more slow-paced and methodical than that of XC1 and XCX, but that isn’t necessarily a bad thing. You now have to stay still to auto-attack, meaning that if you want to reposition yourself you’ll sacrifice your offense for just a moment. Using Arts just as you auto-attack will provide a boost, requiring you to consider timing. And of course, the sheer variety of loadouts you can use due to the Blade system means that party composition is hugely up to your discretion. 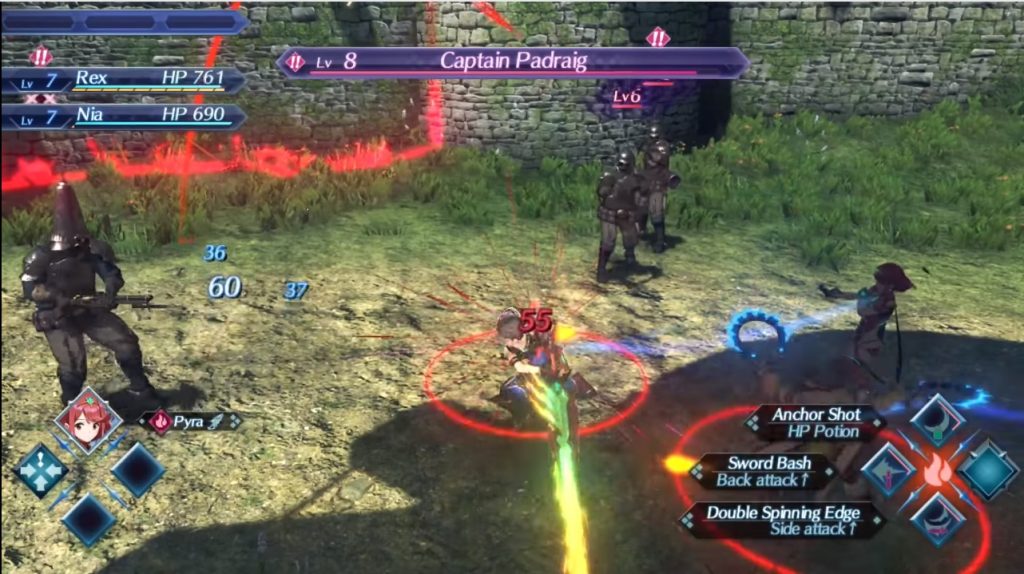 Despite this apparent heap of information, the game is quite effective at doling it out in little doses, making sure it’s not overbearing or difficult to grasp. Tutorials are prevalent without becoming annoying and any bout of confusion I’ve had has only been due to a change from the previous games’ control scheme. While random battles can sometimes drag on just a little long for my liking, bosses are immensely satisfying, and the game is still very nice about letting you pace yourself with its content.

There’s much more to say on Xenoblade Chronicles 2, but we’ll save that for another time. My journey with the game is just beginning, but I’m really enjoying my time with it so far, and I’m excited to get deeper into the plot and further into the intricacies of the gameplay. Stay wired for the second part of our Xenoblade Chronicles 2 review, coming soon.